268 replies to this topic

Fossils of a newly-discovered ancient ape could give clues to how and when walking on two legs evolved.

The ability to walk upright is considered a key characteristic of being human.

The ape had arms suited to hanging in the trees, but human-like legs.

It may have walked along branches and even on the ground some 12 million years ago, pushing back the timeline for bipedal walking, say researchers.

Until now the earliest fossil evidence for walking upright dates back to six million years ago. 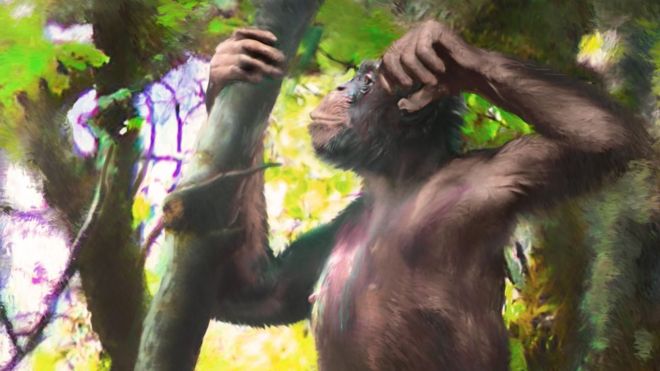 Secrets of the largest ape that ever lived
13 November 2019
A fossilised tooth left behind by the largest ape that ever lived is shedding new light on the evolution of apes.
Gigantopithecus blacki was thought to stand nearly three metres tall and tip the scales at 600kg.
In an astonishing advance, scientists have obtained molecular evidence from a two-million-year-old fossil molar tooth found in a Chinese cave.
The mystery ape is a distant relative of orangutans, sharing a common ancestor around 12 million years ago.
"It would have been a distant cousin (of orangutans), in the sense that its closest living relatives are orangutans, compared to other living great apes such as gorillas or chimpanzees or us," said Dr Frido Welker, from the University of Copenhagen.
https://www.bbc.co.u...onment-50409541 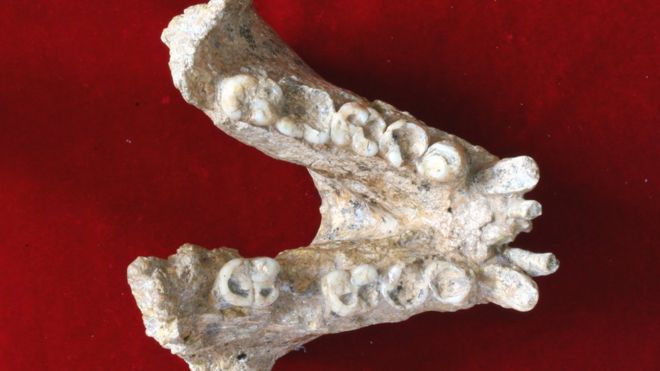 The artwork in Indonesia is nearly twice as old as any previous hunting scene and provides unprecedented insights into the earliest storytelling and the emergence of modern human cognition.

Previously, images of this level of sophistication dated to about 20,000 years ago, with the oldest cave paintings believed to be more basic creations such as handprints.

“We were stunned by the implications of this image,” said Adam Brumm, an archaeologist at the Australian Research Centre for Human Evolution at Griffith University. “This was just mind-boggling because this showed us that this was possibly the oldest rock art anywhere on the face of this planet.” 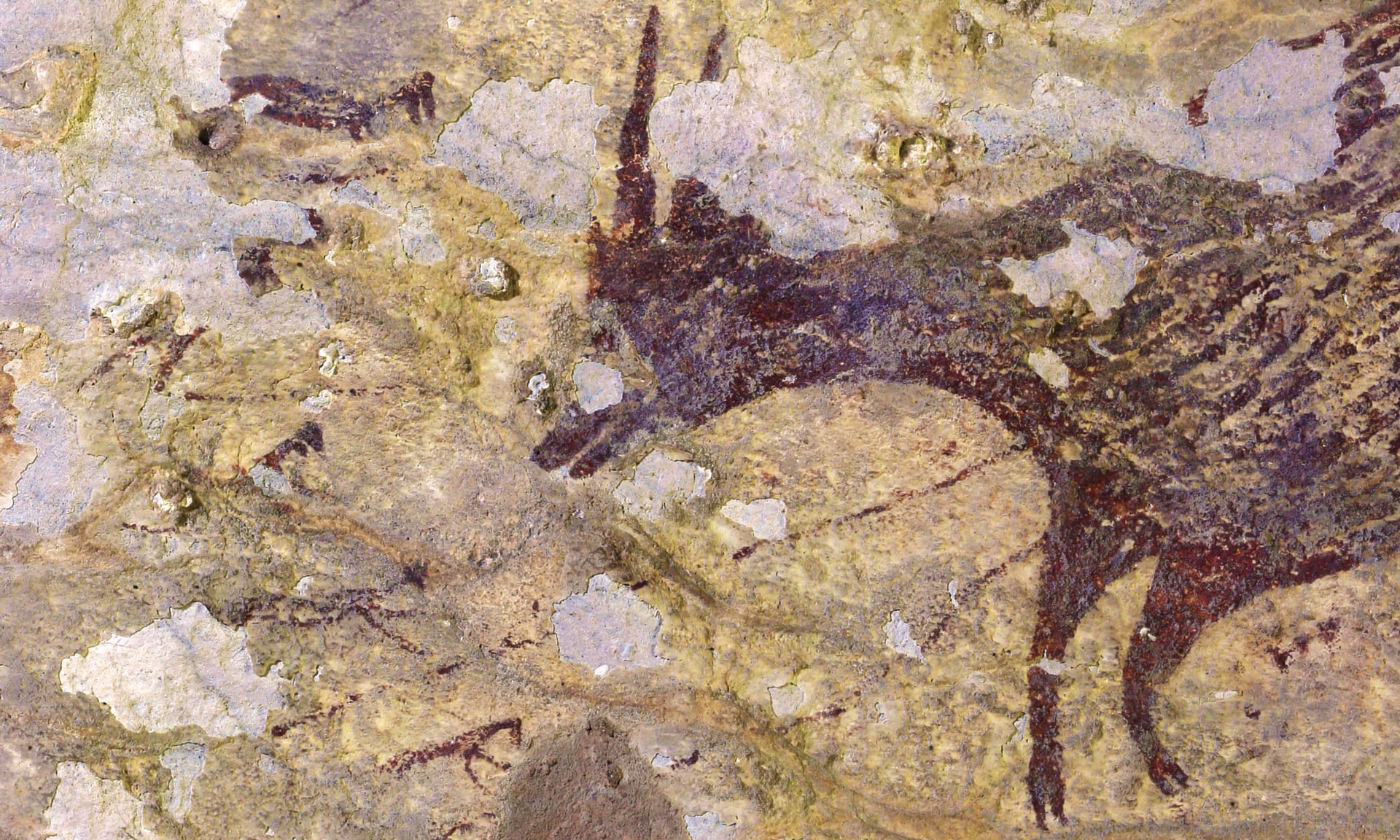 Australopithecine, running from a gigantic Sivatherium. 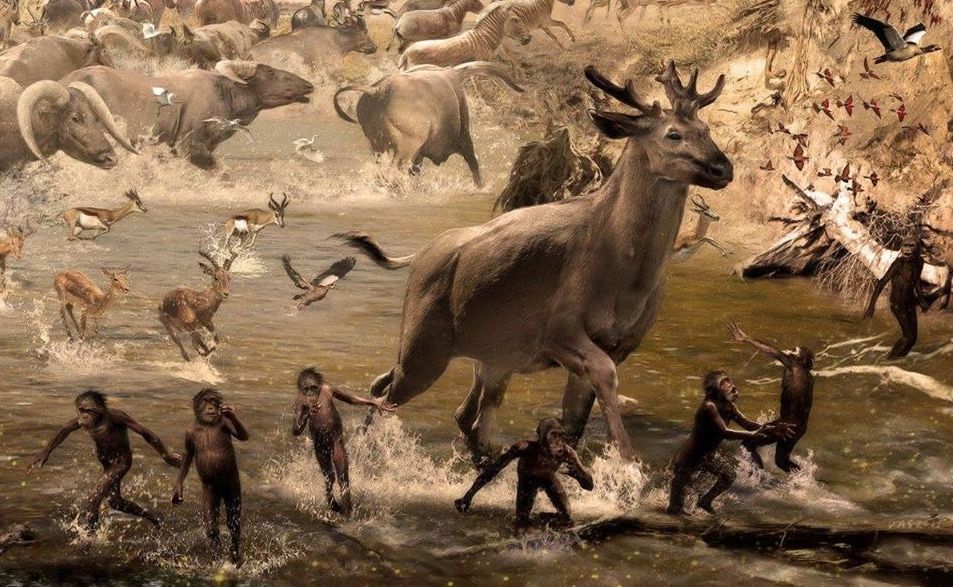 Scientists studying the roots of humanity’s family tree have found several branches entangled in and around a South African cave.

Two million years ago, three different early humans—Australopithecus, Paranthropus, and the earliest-known Homo erectus—appear to have lived at the same time in the same place, near the Drimolen Paleocave System. How much these different species interacted remains unknown. But their contemporaneous existence suggests our ancient relations were quite diverse during a key transitional period of African prehistory that saw the last days of Australopithecus and the dawn of H. erectus’s nearly two-million-year run.
“We know that the old idea, that when one species occurs another goes extinct and you don’t have much overlap, that’s just not the case,” says study coauthor Andy Herries, a paleoanthropologist at La Trobe University in Australia.

Oldest Ever Human Genetic Evidence Clarifies Dispute Over Our Ancestors

(Courthouse News) — Researchers have made new discoveries about the earliest history of humanity’s family tree, thanks to a brand-new research technique and an 800,000-year-old tooth.

In a study published Wednesday in Nature, scientists from the University of Copenhagen reveal a new research method that allows them to study some of the earliest genetic histories of humanity. Using this new method, they studied in deep detail a roughly 800,000-year-old dental fossil from the Gran Dolina cave site in Sierra de Atapuerca, Spain, and learned some interesting truths about humanity’s ancient and sprawling family tree.

The discoveries center around Homo antecessor, an ancient human species believed to have thrived largely during the Old Stone Age. Homo antecessor is widely viewed as an integral part to humanity’s early family tree, but its exact placement and connections with other human species, such as Neanderthals and Denisovans, has never been fully explained.

Wednesday’s study, however, helps to fill in much of those gaps.

Using a chemical analysis method known as paleoproteomics, researchers examined the proteins found within the enamel of the 800,000-year-old dental fossil. After sequencing and breaking apart the chemical data, scientists found the Homo antecessor was much more closely related to early modern humans than previously believed.

(Science) Some of the world’s more famous and closely examined archaeological sites pepper the hillsides of the Central Andes, documenting an invention of farming and the rise and fall of powerful civilizations such as the Inca. Now, the largest study of ancient human genomes in South America has added a personal touch to the artifacts. The new research reveals who lived there, when they lived, and how they moved around and intermingled. And despite being a heavily studied area, a big surprise emerged: Descendants of early inhabitants persisted even as civilizations came and went.

“This paper sheds light on a region that’s home to some of the world’s most intensively studied ancient societies during a particularly dynamic period in its history,” says Jennifer Raff, an anthropological geneticist at the University of Kansas, Lawrence, who was not involved in the work. “Now, we are beginning to understand the biological history as well” as the archaeological history.

The Central Andes Mountains, located mostly in today’s Peru, includes coastal and highland regions. The Incas are the most well-known of the ancient civilizations to live there: During their 1000-year reign, until the Spanish conquered them in the mid-1500s, they built an extensive road system and constructed magnificent stone structures, such as Machu Picchu. And they were preceded by several other well-developed societies. The Moche lived there from 200 C.E. to 850 C.E. and are known for having built giant adobe mounds with murals inside. Overlapping partially in time were the Wari, known for fine textiles and terraced agriculture. And there were other groups as well, such as the Nasca and Tiwanaku.

Machu Picchu was built by the Incas, one of several cultures that settled in the Central Andes over thousands of years.

Normally, I don't like to feature reviews for books that I have not actually read.  In the case below, I have made an exception.  Even if one does not read the actual book, the review itself is interesting enough to read. I recommend the entire review instead of just the introduction that I have cited.

How did ancient cities weather crises?

(Nature) For millennia, cities have generated power, wealth, creativity, knowledge and magnificent buildings. They have also incubated hunger, violence, war, inequality and disease — as we’ve so painfully experienced this year. The coronavirus pandemic has shaken our faith in urban life, as lockdowns have emptied streets that are home to more than half the world’s population. Basic supply networks have been revealed as fragile, and the densely packed social groups that are engines of income, support and enjoyment have become a source of peril.

As the pandemic forces us to contemplate the future of cities — three-quarters of the world’s people could live in urban areas by 2100 — historian Greg Woolf examines their past.