26 replies to this topic


A $10m (£6.5m) prize is on offer to whoever can create a Star Trek-like medical "tricorder". The prize was launched at the Consumer Electronics Show in Las Vegas.

All right, brain. You don't like me and I don't like you, but let's just do this and I can get back to killing you with beer.

I love this concept of X-prizes.

CES 2012 craze: Waterproofing your iThings without a case

LG Display said on Friday that the company plans to start production of its 55-inch OLED TV (55EM960V) sometime in July. The news arrived during the company's 4Q12 report which revealed an operating loss of 144.8 billion won ($129.3 million), its fifth consecutive quarterly loss.
Yet despite the loss, LG's numbers seem to be improving. The company saw a 492 billion won loss in the previous quarter and a 387 billion won loss a year ago. LG is a key panel supplier of Apple's iPad and iPhone as well as Amazon's Kindle Fire tablet, all three of which helped boost sales during the 2011 holiday season.
But given that LCD demand will remain subdued from now until at least March due to a weak global economy and low seasonal demand, the total shipments for the first quarter of 2012 will be similar to the fourth quarter of 2011. Prices are expected to remain stable, said James Jeong, Chief Financial Officer of LG Display.
"Going forward, LG Display is confident about its ability to maintain its leadership with a host of differentiated products in the global display sector even in a rapidly changing market and well positioned to achieve an early turnaround," Jeong said.
LG will reportedly invest 4 trillion won (around $3.5 billion) this year into the OLED technology. Once production of the 55-inch OLED TV begins in July, LG expects to initially produce a conservative 8,000 substrates (8G) per month -- or around 48,000 OLED TV panels. Plans for a large-scale 2013 production won't be made until 3Q12 after the company evaluates consumer acceptance and feedback.
LG's 55-inch OLED TV made its debut earlier this month at CES 2012, sporting passive 3D and a Full HD resolution. It weighed around 16 pounds and had a thickness of less than 4-mm. LG said that it was based on its Oxide TFT (which replaces Amorphous Silicon with a cheaper Oxide) White-OLED (WOLED) panel with color filters (RGBW).
The 55-inch OLED TV is expected to cost around $8,000 USD initially, and then drop down to around $4,000 USD in 2013.

It's dangerous to be right, when your government is wrong.
They that can give up essential liberty to purchase a little temporary safety, deserve neither liberty nor safety. 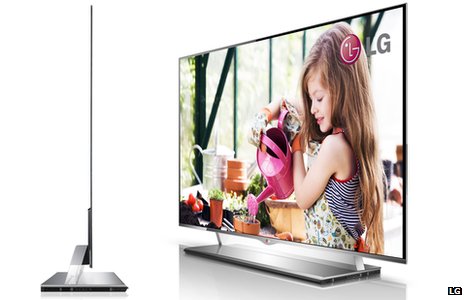