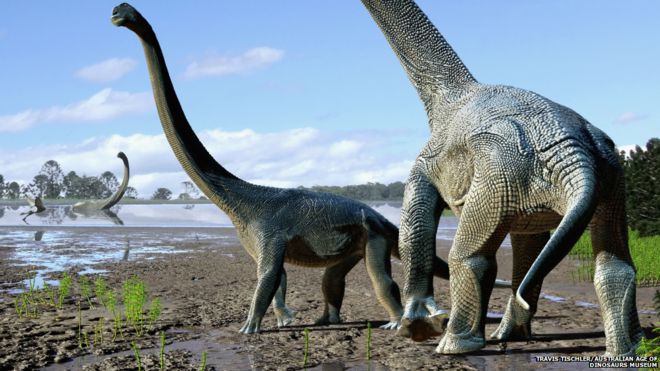 Some of the giants of the dinosaur family may have originated in South America and crossed over Antarctica to Australia about 100 million years ago.

The dinosaurs were able to make the journey when a spell of warming allowed passage over frozen land bridges between the continents.

Both specimens are sauropods - a group of large, herbivorous dinosaurs with long necks and small heads.

Further classified as titanosaurs, they are among the largest dinosaurs ever to walk the Earth.

Lead researcher Dr Stephen Poropot, of the Australian Age of Dinosaurs Museum, said the specimens add to our knowledge of the area 95 to 98 million years ago.

"We get a much better idea of the overall fauna," he said.

"And as a result we can start piecing together how climate affected these dinosaurs, how the positions of the continent affected those dinosaurs and how they evolved through time as well."

Also tagged with one or more of these keywords: Dinosaurs, South America, Antartica, Australia, Sauropods, Herbivores, 95-98 million years ago, Savannasaurus