796 replies to this topic


“The new technique begins with a CNT array,” Zhu says, “which looks like a forest of CNTs growing up out of a flat substrate.” Because the aspect ratio of these CNTs is high, they are long and skinny – not rigid. That means the CNTs are leaning against each other in the array. “By grabbing the CNTs at one end of the array, we are able to pull them over onto their sides – and all of the other CNTs in the array topple in the same direction,” Zhu says. This results in CNTs with good alignment.
These aligned CNTs are then wound onto a rotating spool and sprayed with a polymer solution to bind the CNTs together. This creates a ribbon-like composite material that has a high percentage of CNTs by volume, which can in turn be used to make CNT composite structures for use in finished products like airplanes and bicycles. But that doesn’t address the need to straighten the CNTs.
To straighten the CNTs, Zhu and his team stretched the CNTs as the nanotubes are being pulled onto the rotating spool. This process improves the tensile strength of the CNT composite “ribbon” by approximately 90 percent (to an average of 3.5 gigapascals) and stiffness by more than 100 percent. By straightening the CNTs, the researchers were also able to almost triple the CNT composite’s thermal conductivity, to 40 watts per meter per kelvin. Electrical conductivity was increased by 50 percent to 1,230 siemens per meter.


Remember what the vice president quitly said at the signing of the health care bill, "This is a big f'in deal". Well, that's what this is for materials.

Helping the hunt for something to replace silicon transistors, Big Blue researchers have found a way to precisely place carbon nanotubes -- or rather, to encourage them to place themselves.
by Stephen Shankland
| October 28, 2012 11:00 AM PDT


IBM's technique can arrange single carbon nanotubes -- and sometimes pairs -- between two electrical contacts. It's an essential part of making a transistor in which a nanotube leads from a source on one side to a drain on the other. At left in this is an image of a chip designed to test the technology electrically; at right is a close-up of the nanotubes stretching from one electrical contact to another.
(Credit: IBM)
In the effort to find a replacement for today's silicon chips, IBM researchers have pushed carbon nanotube technology a significant step ahead.

Carbon nanotubes are very small structures made of a lattice of carbon atoms rolled into a cylindrical shape, and a team of eight researchers have figured out a way to precisely place them on a computer chip, IBM announced today. That development allows them to arrange the nanotubes 100 times more densely than earlier methods, a key step in economical chipmaking, and IBM has built a chip with more than 10,000 carbon nanotube-based elements.

The new technique helps improve the nanotubes' chances in the hunt for alternatives once today's silicon transistor technology runs out of steam. Today's chips are made of tiny electrical switches called transistors, and carbon nanotubes are a potential substitute for the silicon channels that carry electrical current in those transistors.

Moore's Law has successfully improved microchips for decades by shrinking chip elements to ever-smaller sizes, and it's got years of life yet in it. Today's Intel "Ivy Bridge" Core processors found in new PCs have transistor elements measuring 22 nanometers, or billionths of a meter, and Intel thinks it can shrink that over several generations of improvement down to 5 nanometers. Beyond that, though, processors will probably need to be built with very different technology.

Encouraging and something to share with neo-luddites that think we are facing a brick wall of silicon chip limits and an end to exponential growth. 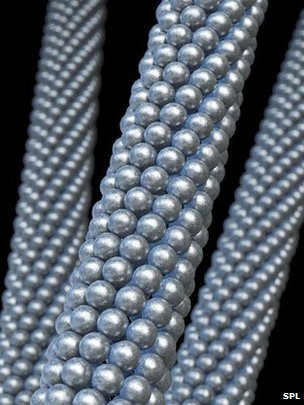 Well have another link about the Nanotubes

Here is another article on it. Kurzweilai.net is a good website. Hopefully they can grow carbon-nanotubes onto chips, but that seems much more difficult. Maybe this turns out to be a fast way of making chips so it can cheaply replace silicon. http://www.kurzweila...ace-silicon-ibm

(Nanowerk News) Using a new method for precisely controlling the deposition of carbon, researchers have demonstrated a technique for connecting multi-walled carbon nanotubes to the metallic pads of integrated circuits without the high interface resistance produced by traditional fabrication techniques.

Researchers create new microparticles that self-assemble like atoms into molecules

"What this means is we can make particles that attach only at the patches, and then we can program them so only specific kinds of particles attach at those patches," said coauthor and NYU physics professor David Pine. "This gives us tremendous flexibility to design 3-dimensional structures." The researchers added that the specificity of DNA interactions between patches means that colloids with different properties, such as size, color, chemical functionality, or electrical conductivity, could lead to the production of new materials. These potentially include 3-dimensional electrically wired networks or photonic crystals to enhance the optical displays of a range of consumer products and to improve the speed of computer chips.

Read more at: Researchers create new microparticles that self-assemble like atoms into molecules


Now the company has revealed what it believes could be the answer to the problem that has dogged nanotube electronics all along: how to pick up the dastardly items - which are only 1 nanometre in diameter - and put them where you want them. They may be great transistors, but if they cannot be placed on a chip they are useless.
Instead of a slavish and hellishly slow pick-and-place operation, IBM's trick is to encourage the nanotubes to organise themselves, with help from some clever chemical engineering.
First the engineers created a solution of nanotubes, coating them with a surfactant that encourages them to dissolve in water. Into this nanotube solution they dipped a silicon dioxide chip carved with hafnium oxide trenches. The process coaxed one nanotube tube into each trench - where the nanotube bonds to the hafnium oxide - creating regular arrays of nanotube-based transistors at a density of 1 billion per square centimetre.
There's a good decade or more to go before they'll know whether this is the technology that'll let nanotubes break silicon's microchip monopoly, but fixing the tubes in place at least gives researchers something to work with. There's more

over at the BBC.

They want us to go back into the tree. These people are sick.

A University of Texas at Arlington physics professor has helped create a hybrid nanomaterial that can be used to convert light and thermal energy into electrical current, surpassing earlier methods that used either light or thermal energy, but not both.

Wow. Could this turn waste head that's pretty much everywhere around into energy? Optical microscope image and schematic diagram of a prototype device. A thin film was formed from an IWO target by DC sputtering on a SiO2/Si substrate using a room temperature substrate. After forming the electrodes, thermal annealing was performed at 100°C. Device characteristics were measured using the electrodes on the substrate as the source/drain electrodes and the substrate as the gate electrode.
A research by Japan's NIMS International Center for Materials Nanoarchitectonics has succeeded in developing a metal oxide film transistor using a material with an unique atomic composition.

Nanotech yarn behaves like artificial muscles. http://www.scienceda...21115141534.htm Imagine having every muscle in your body replaced; you could be 200 times stronger! That would be swell.

"Let teachers and priests and philosophers brood over questions of reality and illusion. I know this: if life is an illusion, then I am no less an illusion, and being thus, the illusion is real to me. I live, I burn with life, I love, I slay, and I am content." -Conan the Cimmerian

Imagine having every muscle in your body replaced; you could be 200 times stronger! That would be swell.


I'm starting to feel very fragile, thinking about the sheer brute strength human-cyborgs and androids will have in the future.

Solvents can cause problems in the manufacture of conducting polymer circuits. The answer is laser printing, say researchers

An Apple Pie from Scratch

New research at King’s College London may lead to improved solar cells and LED-displays. Researchers from the Biophysics and Nanotechnology Group at King’s, led by Professor Anatoly Zayats in the Department of Physics have demonstrated in detail how to separate colours and create ‘rainbows’ using nanoscale structures on a metal surface. The research is published in Nature’s Scientific Reports.

"Since we first emerged, a few million years ago in East Africa, we have meandered our way around the planet. There are now people on every continent and the remotest islands, from pole to pole, from Mount Everest to the Dead Sea, on the ocean bottoms and even, occasionally, in residence 200 miles up - humans, like the gods of old, living in the sky."

Imagine having every muscle in your body replaced; you could be 200 times stronger! That would be swell.


I wonder how would you feel with artificial muscles in your body. while it could make us stronger, i think you would feel the presence of forgein objects inside of your body which i think is not always pleaent.
anyway i 'd like if they could find the way to replace your old muscles cells with younger once so you can come back and have the strenght and the flexibility of a young guy. it would be a bliss for athletes and ex-atheletes.
In combination wth that they could find a genetic therapy that woul make us much stronger biologically. they are already speaking about that.

Yes unfortunally and it is not the first time that this happen in italy. about 10 years ago if i dont remember wrong, some biologists were trying to replicate some types of cells ( i dont remember which types of cells) Well people were still shocked about Dolly. So a group of neo-fascists assulted a laboratory in Rome where they were conducting the experiments. Few days later on a high way in Rome they had exposed a huge banner saying " No Cloning, No technology, only family, God and traditions) and then they added a celtic cross.
unfortunally man people still reason in these terms even today.