The president argued in a statement that the move was necessary to "put our Nation on a fiscally sustainable course."

"This alternative pay plan decision will not materially affect our ability to attract and retain a well‑qualified Federal workforce," Trump said. "[O]ur pay system must reform to align with mission-critical recruitment and retention goals, and to reward employees whose performance provides value for the American people."

In August 2018, Trump initiated an effort to freeze federal civilian worker pay rates. He later implemented the freeze by executive order, but that move was later nullified by Congress in a spending deal.

Federal employee retirement benefits would be cut under Trump's budget

President Trump has again proposed reducing the value of federal retirement benefits while requiring most federal employees to pay more toward those benefits. ... In some cases, the benefits would be reduced only for future retirees, but in other cases, those already retired would face a cut, as well.

The proposals, outlined in Trump's budget released Monday, would require changes in law. They are likely to face opposition from Democrats in Congress and federal employee organizations that have thwarted them in prior years. ... The budget also proposes a 1 percent pay increase for federal employees while recommending 3 percent for military personnel.

A final proposal would reduce the interest rate paid in the Government Securities G Fund of the Thrift Savings Plan, the 401(k)-style retirement savings program for federal employees. That fund consists of special Treasury Department securities that in recent years have paid about a 2 percent interest rate. ... The proposal would reduce that rate to a small fraction of 1 percent, reducing the return to investors by a projected $10.5 billion over 10 years.

“We oppose a change to the G Fund interest rate as it would make the G Fund inadequate and ineffective for TSP investors and would meaningfully impact the retirement savings of millions of Thrift Savings Plan participants,” TSP spokeswoman Kim Weaver said in an email. ... Of the $633 billion in the TSP as of year-end 2019, about 40 percent was in the G Fund. That fund is especially popular among retirees and those close to retirement because of its stability.

Eric Yoder is a National reporter at The Washington Post. He has reported for The Post since 2000, concentrating on federal employee issues, the budget and government management policies. Follow https://twitter.com/EricYoderWP

This college was accredited by a DeVos-sanctioned group. We couldn’t find evidence of students or faculty.
Published 5:31 PM EST Feb 16, 2020
SIOUX FALLS, S.D. – Reagan National University was supposed to be a place of higher learning, but it was unclear how it awarded degrees. By all appearances, at present, it has no students, no faculty and no classrooms.
An agency meant to serve as a gatekeeper for federal money gave the university approval to operate anyway.
That accrediting agency, financially troubled and losing members fast, exists mainly because it was saved by the Education Department in 2018.
Accreditation might be the driest part of higher education, but these independent groups have huge importance: If they approve a college, the government agrees to give federal grants and loans to the students there.
The agency in question, the Accrediting Council for Independent Colleges & Schools, has a history of approving questionable colleges, with devastating consequences. It accredited ITT Tech, Corinthian Colleges and Brightwood College, massive for-profit universities whose sudden closures last decade left thousands of students without degrees and undermined the value of the education of those who did graduate. Those closures led President Barack Obama’s Education Department to strip ACICS’ powers in 2016.
After a federal court decision, Education Secretary Betsy DeVos and President Donald Trump's administration reinstated the accrediting agency.
https://eu.usatoday....lls/4746906002/ 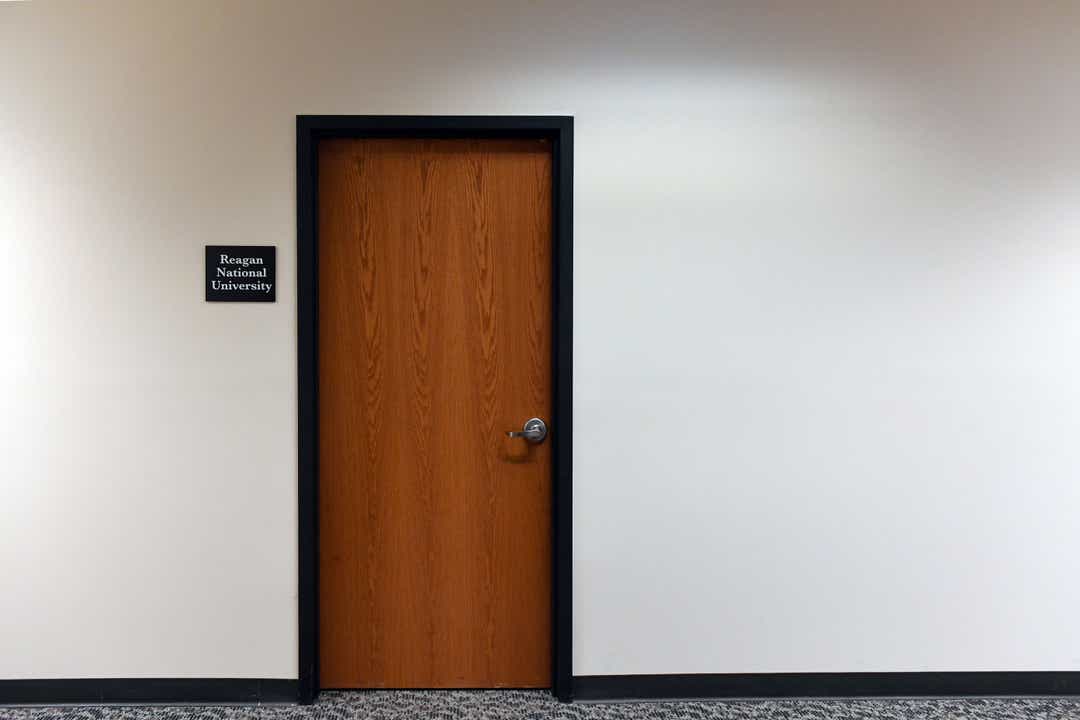 A sign for Reagan National University is posted outside one of two locked doors in the office building at 114 S. Main Ave on Wednesday, Jan. 29, in downtown Sioux Falls.

Internal socio-political tensions are heating up. The country is overdue for a recession. The president has escaped impeachment. And it's an election year. I think the US is going to be in a state of chaos by the end of the year.