So he bought a pellet air rifle?

SILVER SPRING, Md. (AP) — The U.S. budget deficit climbed to $2.81 trillion in the first 10 months of the budget year, exceeding any on record, the Treasury Department said Wednesday.

The nation’s budgetary shortfall is expected to eventually reach levels for the fiscal year that ends Sept. 30 more than double the largest annual deficit on record.

The federal government rang up a $63 billion deficit in July, the department reported. That’s a relatively modest amount compared to red ink that spilled in the spring months when the government tried to revive an economy that all but ground to a halt due to the coronavirus outbreak.

Last month’s deficit was sharply lower than June’s $864 billion, in part because the government collected a record amount tax revenue in July — $563 billion — after extending the filing deadline to July 15. That extension allowed Americans more time to sort through the economic havoc wrought by the pandemic.

(Inequality.Org) Between March 18 and August 5, 2020, the total wealth of U.S. billionaires went up $685 billion (including those that have lost funds), based on an analysis of Forbes data.  U.S. billionaires have total combined wealth of over $3.65 trillion.

…Inspired by…reports on billionaire wealth increases, Senator Bernie Sanders has introduced the “Make Billionaires Pay Act.” This Act would levy levying a 60% tax on the growth in wealth of those 467 billionaires whose wealth has increased since March 18th, based on our Institute for Policy Studies/Americans for Tax Fairness analysis.

The total wealth of this group grew $732 billion, or 30 percent, since the start of the pandemic.  This tax would raise $422 billion if it were levied based on today’s wealth.  Sanders would use the revenue to cover the out-of-pocket medical expenses of all the uninsured and the under-insured Medicare beneficiaries over the next 12 months during the COVID-19 crisis.

“An emergency wealth tax on billionaires is what the body politic requires,” said Chuck Collins, coauthor of Billionaire Bonanza 2020 and director of the Institute for Policy Studies – Program on Inequality. “These billionaires will remain billions richer than a year ago—and a portion of their extreme wealth gains will be deployed to address the pandemic crisis.”

The article lists gains of the top five billionaires:

*I rounded down to the nearest billion, while the percent shown for "Growth" was apparently calculated on more precise numbers.

The article cites sources for the data I posted as follows:

Sources: All data analyzed by ATF and IPS is from Forbes and available here. March 18, 2020 data is from the Forbes World’s Billionaires List: The Richest in 2020. June 17, 2020 data was taken from Forbes real-time estimates of worth that day.

The article cites sources for the data I posted as follows:

Sources: All data analyzed by ATF and IPS is from Forbes and available here. March 18, 2020 data is from the Forbes World’s Billionaires List: The Richest in 2020. June 17, 2020 data was taken from Forbes real-time estimates of worth that day.

^^^The table of individual billionaires is through June 17, 2020.  The total they cite in the opening paragraph is through August 8, 2020.  I suppose it would have made a little more sense to have those two dates be the same.  Still, don't let that detract you from the basic theme of the article.

Republicans: "COVID is so dangerous we need to let Cohen, Stone and friends out of prison, safe enough to make kids go back to school, so dangerous we might have to delay the election, but safe enough that when it happens we should make people show up in person!! It's such a small percentage of the population that dies!" 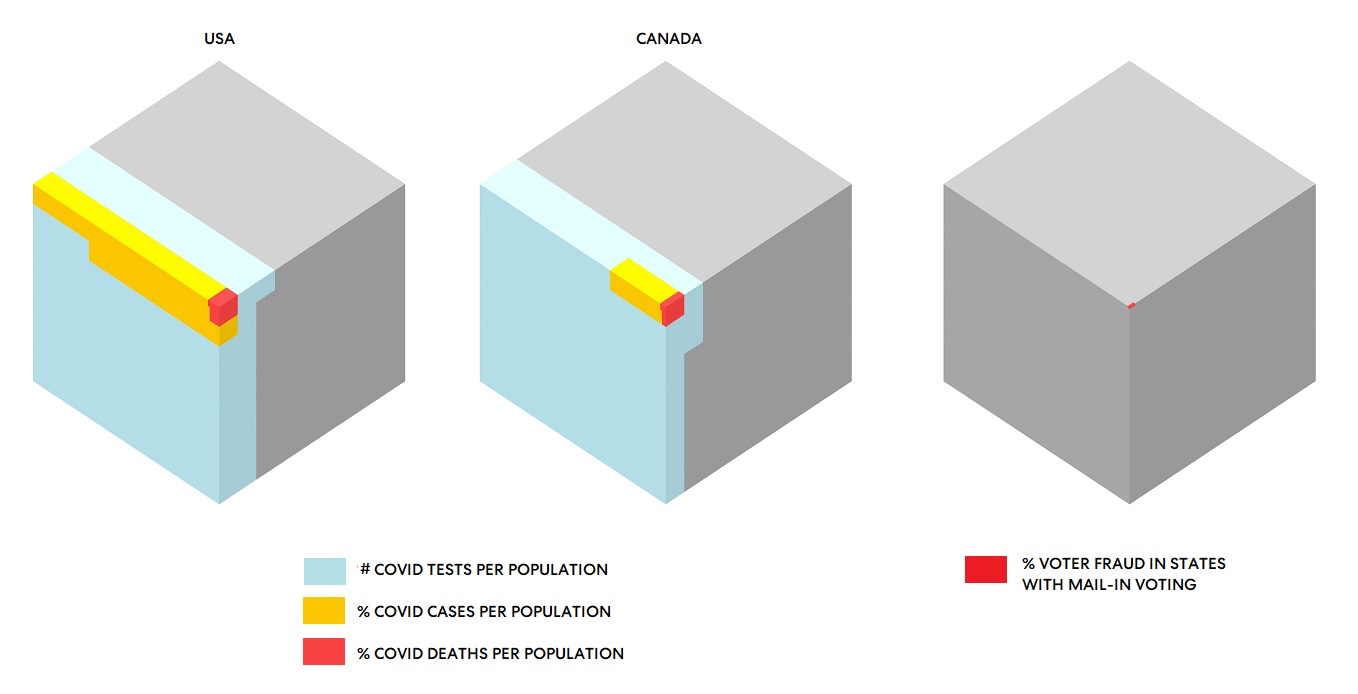 According to House Speaker Nancy Pelosi, Postmaster General Louis DeJoy said 'he had no intention of replacing the sorting machines, blue mailboxes, and other key mail infrastructure that have been removed.'

Pelosi (D-CA) said she told Postmaster General Louis DeJoy in a phone call that his decision to temporarily pause any further postal operations changes is "wholly insufficient and does not reverse damage already wreaked."

She said DeJoy "frankly admitted that he had no intention of replacing the sorting machines, blue mailboxes, and other key mail infrastructure that have been removed and that plans for adequate overtime, which is critical for the timely delivery of mail, are not in the works."

Her statement comes as the Postal Service faced more questions and concerns and a federal lawsuit Wednesday over mail delivery disruptions after DeJoy's abrupt decision to postpone any further changes until after the Nov. 3 election.

(CNBC) Former White House chief strategist Steve Bannon was arrested Thursday after being charged with defrauding hundreds of thousands of donors through his “We Build the Wall” fundraising campaign.

Bannon and three associates were indicted in a federal investigation in the Southern District of New York. Prosecutors allege the four defrauded donors by raising “more than $25 million to build a wall along the southern border of the United States,” but some of that money was used for personal gain.

The United States Postal Inspection Service assisted in the investigation.

Others in the indictment are Timothy Shea, a 49-year-old from Colorado accused of owning a shell company, Brian Kolfage, a disabled Iraq war veteran, and Andrew Badolato, who according to his own website was a contributor to Breitbart News, the conservative publication Bannon used to run.

…“The defendants defrauded hundreds of thousands of donors, capitalizing on their interest in funding a border wall to raise millions of dollars, under the false pretense that all of that money would be spent on construction,” Acting U.S. Attorney Audrey Strauss said in a statement. “While repeatedly assuring donors that Brian Kolfage, the founder and public face of We Build the Wall, would not be paid a cent, the defendants secretly schemed to pass hundreds of thousands of dollars to Kolfage, which he used to fund his lavish lifestyle.

Breaking: Judge denies Trump's request for a stay on subpoena for tax records

A federal judge in New York on Friday denied President Trump’s request to temporarily halt a grand jury subpoena for his tax returns from taking effect.

The ruling by District Judge Victor Marrero comes a day after he dismissed Trump’s latest attempt to block a New York grand jury subpoena for eight years of Trump’s financial documents, including his personal and corporate tax returns.

Trump’s personal attorneys had asked Marrero, a Clinton appointee, to pause his Thursday decision from taking effect while Trump appealed to the New York-based federal appeals court — a request Marrero shot down Friday in a 9-page decision.

The recent rulings against Trump move Manhattan prosecutors closer to obtaining the president's tax returns, though it’s unlikely the public will see them before the November election.

In his Friday decision, Marrero said Trump had failed to prove he would suffer “irreparable harm” if his stay request were denied.

Existing-home sales rose 24.7% in July from June to a seasonally adjusted annual rate of 5.86 million, the highest rate since December 2006, the National Association of Realtors said Friday. The July sales marked a 8.7% increase from a year earlier. 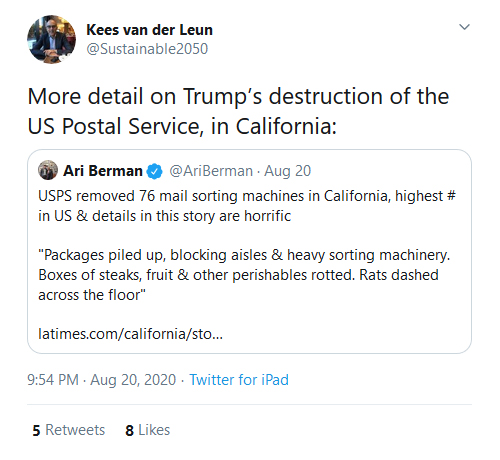 I don't know how, but I have a feeling this is going to badly backfire. Castrating the mail service for an election months away in the middle of a pandemic? Yeah, I think something is gonna break before November 3rd.

INDIANAPOLIS (Courthouse News) — Indiana election officials cannot reject absentee ballots based upon mismatched signatures without first notifying the voter and giving them a chance to correct any mistakes, a federal judge ruled.

“Indiana’s signature verification requirement is unconstitutional under the Fourteenth Amendment of the United States Constitution insofar as it fails to provide any notice or cure procedures before rejecting mail-in absentee ballots for signature mismatch,” Barker wrote.

Barker, a Ronald Reagan appointee, reasoned that while Indiana voters technically have no constitutional right to vote by absentee ballot, state law allows for it and it must be carried forth in a manner that abides by the U.S. Constitution.

The judge pointed to testimony from an expert witness, who explained that determining whether a signature is valid is difficult because many factors can go into comparing two signatures.

(Mother Jones) Back in the summer of 2016, Steve Bannon interviewed Peter Schweizer on Bannon’s Breitbart News radio show. The two discussed Clinton Cash, the 2015 book that Schweizer wrote about Bill and Hillary Clinton’s foreign financial entanglements. Bannon’s takeaway was simple. The Clintons, he insisted, are corrupt. “The Clinton have sold out their own people for cold cash,” Bannon said. “They are grifters.” He added, baselessly, that the former first couple was running a “money laundering operation.” (Bannon would go on to run the Trump campaign and briefly serve in the Trump White House.)

Fast forward to 2020: Bannon, along with three other individuals, has been charged with conspiracy to commit money laundering and conspiracy to commit wire fraud relating to an effort to build a donor-funded wall on the US-Mexico border. According to US Attorney Audrey Strauss, Bannon and the other defendants “defrauded hundreds of thousands of donors, capitalizing on their interest in funding a border wall to raise millions of dollars, under the false pretense that all of that money would be spent on construction.”

During the 2016 radio broadcast, Bannon asserted that the Clintons had exploited progressive causes—global warming, environmental issues, human trafficking—and “monetized it on a global scale.” Though Bannon’s claims were baseless, the hypocrisy is clear. He’s now been charged with exploiting anti-immigrant hysteria in an effort to defraud right-wing donors.

Meanwhile in Wisconsin... btw, do you feel the "wind of change"? Until recently, the footage like this from USA could be considered shocking. But today this just a routine and a new normal: