586 replies to this topic

Honda on Thursday unveiled a partially self-driving Legend sedan in Japan, becoming the world's first carmaker to sell a vehicle equipped with new, certified level 3 automation technology.
The launch gives Japan's No.2 automaker bragging rights for being the first to market, but lease sales of the level 3 flagship Legend would be limited to a batch of 100 in Japan, at a retail price of 11 million yen ($102,000).
The Legend's "Traffic Jam Pilot" system can control acceleration, braking and steering under certain conditions.
Once the system is activated, a driver can also watch movies or use the navigation on the screen, helping to mitigate fatigue and stress when driving in a traffic jam, Honda said in a statement.
It can alert the driver to respond when handing over the control, such as vibration on the driver's seatbelt, the carmaker said. And if the driver continues to be unresponsive, the system will assist with an emergency stop by decelerating and stopping the vehicle while alerting surrounding cars with hazard lights and the horn, it added.

Sounds like they aren't quite ready for a real commercial release, but they wanted to make headlines.

Devil's advocate: level 3 autonomy in general is at that cross-section of commerciality and the smell of ass.

Intriguing that a carmaker's actually pursuing level 3 autonomy. One of the big reasons why Audi wasn't able to pull this off despite their A8 having the capability well over a year ago is because level 3 autonomous vehicles exist in a very murky gray area of legality and technology.

Level 0s leave all control up to the human driver, so you have to always be alert. Level 1s (i.e. lane-assist and cruise control) already cause people to get a bit too comfortable and distracted, but it's not a detriment. And level 2s have been treated like level 4s by people who have them, what with people falling asleep behind the wheel or watching movies. But most people realize you still have to keep your eyes on the road. It's like adaptive lane assist, except that it assists you by shifting into other lanes. It's like cruise control, except it also handles speeding up, slowing down, and stopping. But despite that, you must be ready to take over at a moment's notice.

Comparatively, level 4 is where you don't. The only reason a human would have to take over at a moment's notice in a level 4 AV is because they're living in Syria or Grand Theft Auto and a psychopath just ran out from cover with an RPG ready to shoot. And level 5s, you don't even need a steering wheel— the car's basically an artificial general intelligence-powered wheeled mech that you've probably married and talk to like a friend.

See, level 3 is the bizarro place. It doesn't place enough manual control or expectation of manual control into the driver's hands, but it's also not autonomous enough to be truly hands-off, so the driver's going to be more stressed out than necessary wondering if they ought to pay attention or not in any given situation, and the legal issues if there's a crash is also very murky.

Elon tweet: "FSD Beta has now been expanded to ~2000 owners & we’ve also revoked beta where drivers did not pay sufficient attention to the road. No accidents to date. Next significant release will be in April. Going with pure vision — not even using radar. This is the way to real-world AI."

(CNN) This week, Domino's is rolling out a robot car delivery service to select customers in Houston. For those who opt in, their pies will arrive in a fully autonomous vehicle made by Nuro.

Here's how it works: Customers in the Woodland Heights neighborhood of Houston can choose robot delivery and receive texts with updates on the car's location and a numerical code that can be used to retrieve the order. Once the car arrives, the customer enters the number on the bot's touchscreen, and the car doors open up to serve the food.

This isn't Domino's first foray into the world of autonomous deliveries. In 2017, the Michigan-based company used a self-driving Ford Fusion hybrid to deliver pizzas to randomly chosen customers in Ann Arbor, Michigan. And in 2013, Domino's tested out pizza delivery via drone in the United Kingdom. 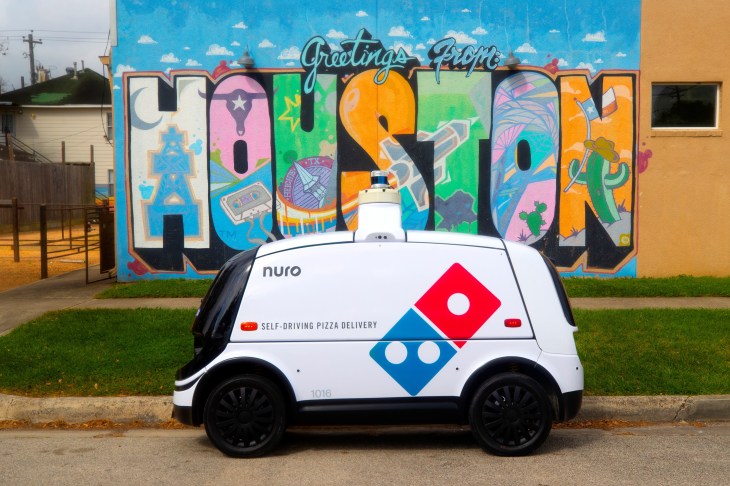 Ocado in self-driving vans push with £10m stake in Oxbotica

It has teamed up with another British company, Oxbotica, to build self-driving vehicles for itself and others who use its platform.

That could include automatic forklift trucks at warehouses, self-driving delivery vans, or even "kerb to kitchen" robots for the final leg.

As part of the deal, Ocado has bought a £10m stake in Oxbotica.

Together, they say they plan to build hardware and software for autonomous vehicles.

"We want the entire end to end operation, ultimately, to be autonomous - from the receipt of stock to the warehouse all the way through to the customer's door," said Alex Harvey, Ocado's head of advanced technology.

Unlike previous Baidu BIDU, 0.36% autonomous driving demonstrations in Beijing, this was the first time there was no safety driver sitting behind the wheel. Instead, a safety member was seated in the front passenger seat to deal with any emergencies.

Up to 10 Apollo “robotaxis” are now operating simultaneously in an area of about 1.2 square miles, picking up and dropping off passengers at eight stops in Shougang Park in western Beijing. Each ride costs 30 yuan ($4.60), and is open to passengers ages 18 to 60.

The park is a former site of iron and steel plants that’s been redeveloped into a sightseeing destination and a future venue for the 2022 Beijing Winter Olympics. Although traffic flows aren’t heavy, an influx of tourists was seen in the park on the second day of China’s international labor day holiday.

The robotaxis were repeatedly forced to brake when encountering jaywalkers or curious tourists who came close to the vehicles for photos. 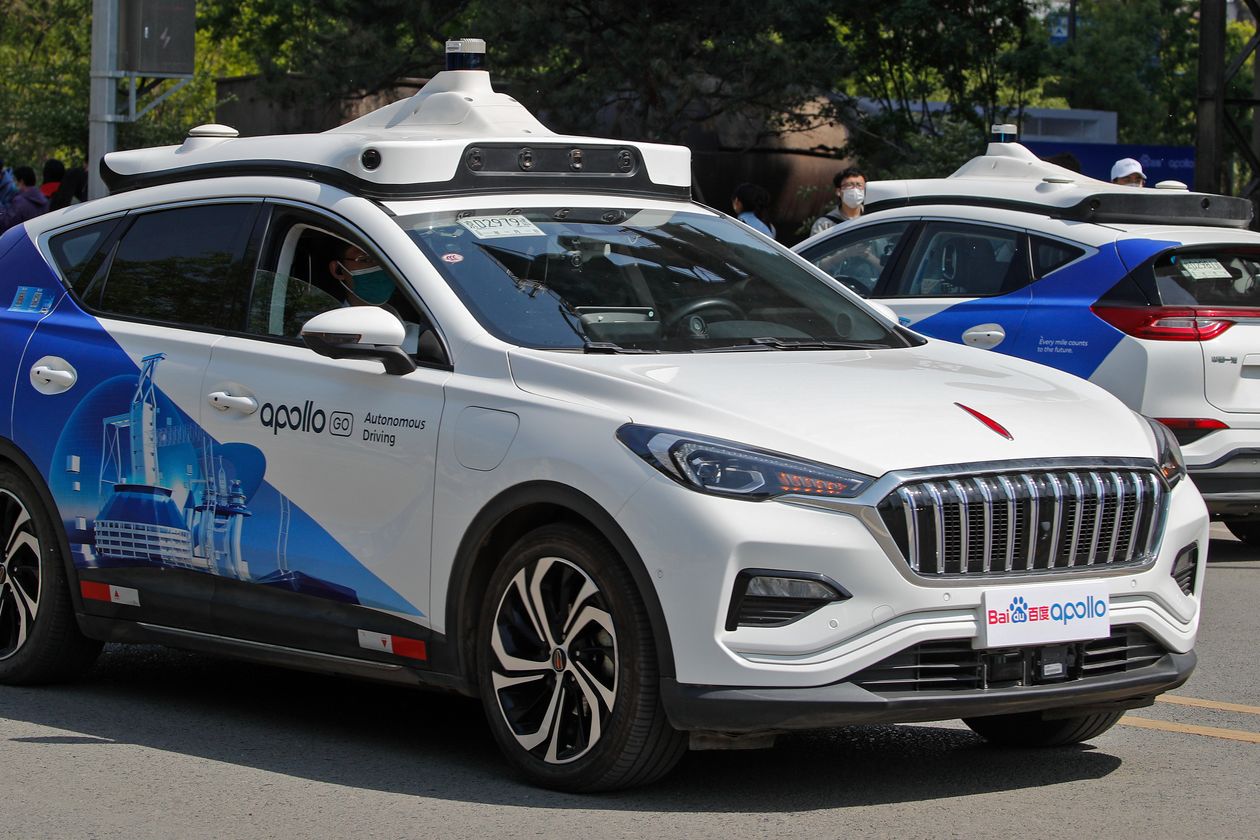