236 replies to this topic

Turkish President Tayyip Erdogan, who is pushing for executive powers, cites Hitler's Germany as an example of an effective presidential system, in comments broadcast by Turkish media on Friday.
Erdogan wants to change the Turkish constitution to turn the ceremonial role of president into that of a chief executive, a Turkish version of the system in the United States, France or Russia.

Asked on his return from a visit to Saudi Arabia late on Thursday whether an executive presidential system was possible while maintaining the unitary structure of the state, he said: "There are already examples in the world. You can see it when you look at Hitler's Germany.

The First as Tragedy, Then as Farce: Is Erdogan After New Crimean War?

The Crimean War was one of the most absurd conflicts in modern history, according to geopolitical expert F. William Engdahl; however, the escalating conflict being incited by Turkey’s would-be new Sultan, Recep Erdogan, by provoking Russia again and again, is more of a farce, he said, recalling Karl Marx’s remark on how tragedies repeat themselves.

“As if it weren’t enough to satisfy his macho by shooting down a Russian Su-24 fighter jet in Syrian airspace, an act of war by a NATO country, and murdering the Russian pilot, using his Turkish Grey Wolves terrorists, in violation of every precept of civilized nations, now the hot-headed Erdogan is openly stirring conflict in the Russian region of Crimea,” F. William Engdahl writes in his article for the magazine New Eastern Outlook.
The expert illustrates the above statement with the recent meeting of the Turkish leader with the “two organizers of the recent blockade actions against food and electricity that have been launched against the citizens of Russian Crimea.”

Another illustration is that Erdogan is also “sending the ultra-right-wing Turkish nationalist terrorist Grey Wolves into Ukraine to team up with Ankara-backed Crimean Muslim Tatar terrorists.”

Turkey needs to be removed from NATO at once.

What, just because they buy oil from ISIS, imprison more journalists than any other country on Earth, shot down a Russian jet, deny that they committed genocide against the Armenians, and actively persecute the Kurds? But then who would the U.S. turn to when they want to wrest control of the world's biggest sandpit from Russia and Iran, and dominate oil production in the Middle East? Saudi Arabia is in a slow and steady decline, Israel spent much of last year openly weighing the pros and cons of bombing Iran, and Turkey is one of the biggest military powers in the world. Erdogan, cave-dwelling slime that he is, is there to stay.

I loudly predicted the second wave of the Global Financial Crisis would begin by the 31st of March 2017. But I was wrong! Observe my well-deserved public humiliation here, here and here. Let this be a warning to all of you who try to guess the future. Yes, that means you, reading this now! Put that prediction back in your pocket! Do it now, before it's too late! (Also check out my userpage, it's even funnier.)

Just was reading up on the background of the Armenian, Assyrian, and Greek genocides just to confirm my anti-Turk bias even more than I already have. It is now even more clear that this country should not be in NATO.

Opposition against him is rising rapidly in the West, although over the last 3 years he has grown steadily more unpopular in Western countries: http://www.huffingto..._b_8903734.html

I am convinced the only real reason that he hasn't been seriously reprimanded/publicly expelled from the NATO alliance already is because Obama does not want to look like a fool for having so strongly supported him earlier in his mandate, on top of the little straits problem. Will be interesting to see what a new U.S. president would do with Turkey. I believe I read an article earlier of Trump saying that Erdogan supports ISIS which makes me think that there may be positive development in this particular area if Trump were to become president. I doubt Hillary would change policy as her tenure as Secretary of State was marked by strong support for Turkey which just makes me dislike her even more. No idea about what Saunders or the rest of the GOP candidates think on this matter.

Saying that their comments are "constitutional crimes" (whatever that means)... More violence incoming as a full on Turkish-Kurdish Civil War looks likely.

It was predictable since they shot down our plane to stop Russia from bombing the oil business of mr. Erdogan & since our military started to "pay special attention" on pro-Turkish terrorist groups in Northern Syria. It has became even more predictable since the start of successful SAA offensive campaign which had cut their supply lines:

RT is the absolute worst type of source for this kind of news.

RT is the absolute worst type of source for this kind of news.

As you wish. But in my eyes, it's still more trustworthy and less biased than western sources (BBC for example). Soon we will see, was RT right or not.

Well, no matter do you believe RT or not, the situation is obvious: after the recent Syrian offencive pro-Turkish militants are now in one big pocket: 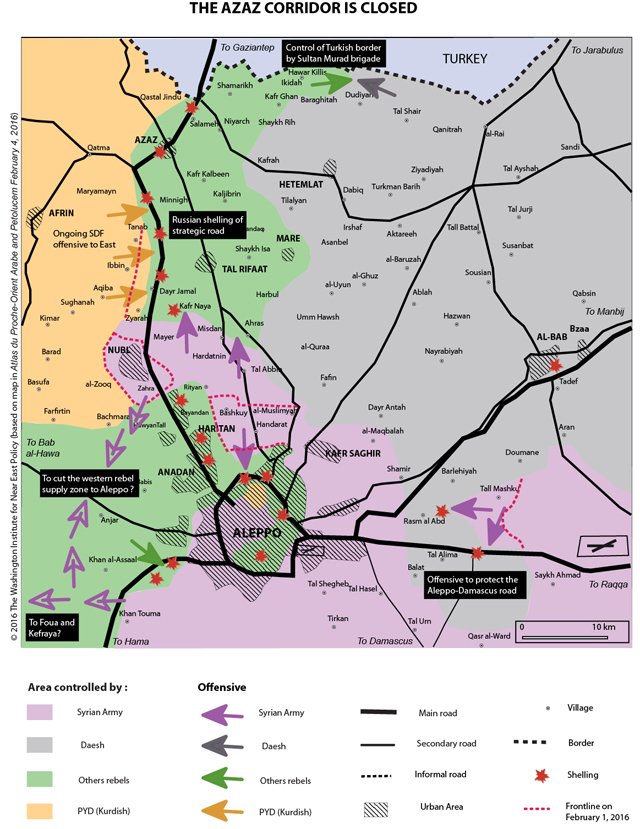 So they will either be defeated, and this will ruin all the Turkish expansionist strategy in Syria... or mr.Erdogan will have to attack in very near future, to save his puppets from total collapse. I am very interested to see what he will do.

This is how all totalitarians behave. Control the thoughts of your population...

A lovely thread to hate on the Turkish PM Recep Tayyip Erdogan. This guy is in the news a lot and is the only international leader who constantly makes me throw up a little in my mouth when I see his name pop up. So instead of creating individual threads for each action he does we can just compile all the hate for him here.

The most dishonest, two-faced, arrogant, authoritarian Islamist to ever lead any country ever turning Turkey into a dictatorship. Also I just roll my eyes at how the West refuses to remove Turkey from NATO until his government is given the BOOT.

Some of the reasons I hate him:

2. Erdogan slapping a grieving family member after a big mining disaster in 2013 - http://www.telegraph...-protester.html

6. Erdogan cracking down on judiciary and police to prevent them investigating his corrupt, scumbag son - http://www.reuters.c...EA410NE20140502

Among other things. I'm sure our Russian posters have reasons to hate him too.

Such a typical, egomaniacal psychopath. Hopefully there'll be a revolution, the people will rise up and remove him from power.

In the UK we call him the Turkish Putin.

Putin does not even remotely compare to this guy.

Here are some new headlines from said newspaper!!! Another image of the anti-Christ himself