227 replies to this topic

Turkey has blocked all access inside the country to the online encyclopaedia Wikipedia, one of the world's most popular websites.

The Turkey Blocks group said the site was inaccessible from 08:00 (05:00 GMT) by order of the Turkish authorities.

Social media was in uproar as news of the ban emerged, with some users speculating that it might be a bid to suppress criticism on President Recep Tayyip Erdogan's Wikipedia page.

Mr Erdogan narrowly won a controversial 16 April referendum on increasing his powers, but the issue has deeply divided the country.

One Twitter user noted that the Wikipedia page on Turkey's referendum has a section on "controversies and electoral misconduct", and cites claims that the government suppressed the 'No' campaign through "arrests, control of the media and political suppression". 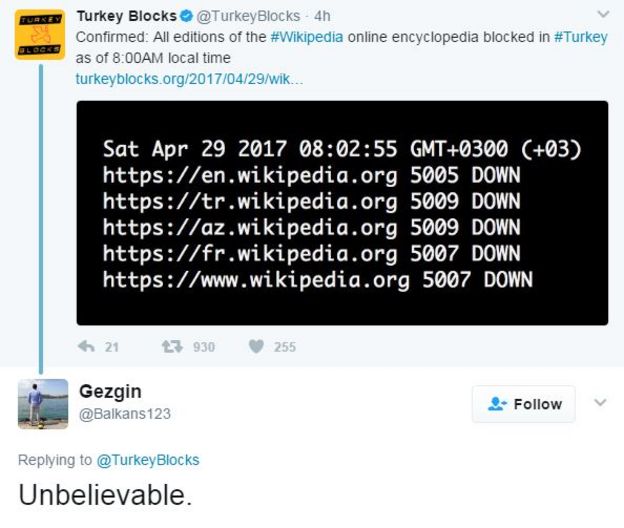 I am sure Trump would love to bloc the media and wikipedia here in America...Trump and Erdogan are very much alike...Both hate anyone that talks out against them.

The Turkish government has sacked almost 4,000 more public officials in what appears to be the latest purge related to a failed coup last July.

They include more than 1,000 justice ministry workers, a similar number of army staff and more than 100 air force pilots, officials said.

In a separate decree, Turkey banned TV dating shows - a move previously mooted by the government.

The latest sackings follow the suspension of more than 9,000 police officers and the arrest of 1,000 more last Wednesday on suspicion of having links to the US-based cleric Fethullah Gulen.

Dictators don't always hate the truth, sometimes they live to find the truth.

That's "build the wall" in Turkish, apparently, according to Google translate.
The government of Turkey says it plans to build a wall on the border with Iran to keep out the Kurds, an ethnic group that's been the bane of existence of leader Recep Erdogan. The wall is designed to keep out Kurdish rebels, Turkish newspaper Hurriyet Daily News reported.

Quite a coincidence, I just wrote in the Iran/Saudi Proxy War thread about potential growing tensions between Iran and Turkey, not that I think this in itself will change the dynamics a lot, but it goes to show that there's two growing opposing powers right beside each other with different proxies fighting each other, and the Kurds in the middle.

Matthew: I am sure Trump would love to bloc the media and wikipedia here in America...Trump and Erdogan are very much alike...Both hate anyone that talks out against them.

I'm not sure this is true, Trump def. hates people speaking out against him, but Interestingly the US media has mostly been overwhelmingly anti-trump. (except in that they kept giving him endless free publicity) Where Trump did really well is in the less well regulated parts of the internet where people can share directly to each-other, like Facebook and Twitter.

Trumps victory basically triggered huge numbers of calls for Facebook to start censoring people by policing what people shared. All in the name of preventing "fake News".

So if Trump had his way he'd be shutting down loads of well established newspapers, which mostly report what their owners tell them too while encouraging a free and open internet.

A group of peaceful demonstrators protesting Turkish President Recep Tayyip Erdogan’s official visit to the United States, were attacked by pro-Erdogan groups at the Sheridan Circle near the residence of the Turkish Ambassador to the U.S.
“[This was] the type of violence you would never expect to see in America’s capital. It was the type of violence you’d expect to see in Erdogan’s Turkey and in other dictatorships,” said Armenian National Committee of America (ANCA) Executive Director Aram Hamparian, who captured parts of the attack and streamed the aftermath live on the ANCA’s Facebook page. “This is the very type of intolerance that has come to predominate in Turkey and it has now been exported here,” he added.

Par for the course with Erdogan his people did the same thing last time he was in Washington under Obama. This guy should be a persona non-grata if his security personnel cannot behave.

Can they not see the truth, like in this (completely unbiased) magazine? The Education Ministry of Turkey will no longer allow the teaching of evolution in schools, a decision that the Center for Inquiry and Richard Dawkins have denounced as an unconscionable neglect of Turkey’s students, and a troubling rejection of the country’s proud tradition of secularism.

“This is a tragedy for the future of Turkey, as a generation of its young people will be robbed of the opportunity to learn about this fundamental and undeniable principle of biology, and misled about their country’s secular foundations,” said Robyn Blumner, President and CEO of the Center for Inquiry (CFI).

“As Turkish scientists will agree, evolution is an established fact, as firmly established as plate tectonic movements or the solar orbits of the planets,” said renowned evolutionary biologist Richard Dawkins, whose foundation is a division of CFI. “I’d like to pay the Turkish framers of this ridiculous education policy the compliment of assuming that they are cynical political manipulators. But actually, I fear they are more likely to be just plain stupid.”

Germany tells Erdogan's bodyguards to stay away from Hamburg G20

The Federal Criminal Police Office (BKA) said earlier that foreign powers did not hold sovereign powers, saying "foreign colleagues only have the right to self-defense," the paper reported.

Hamburg Senator Andy Grote told Die Welt: "On our streets, only the Hamburg police have a say - and no one else. This includes foreign security forces." "This is bigotry, this is all about being a fanatic. How are they going to teach biology now? How are they going to talk about science?"
On an online forum about the government's decision to exclude the theory of evolution from the national curriculum, a passionate discussion is under way.
"Evolutionary theory is one of the most powerful and fundamental theories in modern science. To describe it as 'controversial' is unbelievable," says one commenter.
Another argues that the theory was not well taught anyhow: "Once the teacher asked us who believed in evolutionary theory. I raised my hand. The teacher said: 'Are you a monkey then?'"

The Turkish Directorate of Religious Affairs (Diyanet) has seized control of at least 50 Syriac churches, monasteries, and cemeteries in Mardin province, report media sources from Turkey.

Well, it will take some time, but hopefully in 20-30 years when Turkey's economy has totally collapsed, it will serve as a lesson to the people trying to ban science in schools in other countries.

Turkey's ruling Justice and Development Party (AKP) and its far-right allies at the Turkish Parliament agreed to pass a resolution submitted Friday that would ban the use of the word 'Kurdistan' by lawmakers in Parliament.

In the draft resolution on parliamentary procedure written by the AKP and the Nationalist Movement Party (MHP), lawmakers saying phrases such as "Kurdistan provinces," "the capital of Kurdistan Amed" would be fined.

Amed is an ancient name for the Kurdish city of Diyarbakir, often used by Kurdish nationalist political groups including the Peoples' Democratic Party (HDP), Turkey's second-largest opposition block in Parliament.

Two trainers, from Germany and Sweden, were also arrested as they worked in a digital security workshop at a hotel.
No reason has been given for the arrests. The operation was a "grotesque abuse of power", Amnesty said.
Meanwhile, tens of thousands of people are marching from Ankara to Istanbul as part of an opposition protest.
The march, now on its 22nd day, was in reaction to the arrest of an opposition lawmaker. But it has become a wider demonstration of what many say is an erosion of democracy under President Recep Tayyip Erdogan.

Turkey's main opposition leader told a huge protest rally on Sunday that the country was living under dictatorship and pledged to keep challenging the crackdown launched by the authorities after last year's failed military coup.

Addressing hundreds of thousands of people waving Turkish flags and banners demanding justice, Kemal Kilicdaroglu said his 25-day march from Ankara to Istanbul - culminating in Sunday's rally in Istanbul - was the first stage of a long campaign.
"We will be breaking down the walls of fear," he told the crowd who gathered to welcome him at the end of his 425 km (265 mile) trek from the Turkish capital.
Kilicdaroglu's protest march drew only modest support in its early days, but as more people joined him it grew into the biggest protest yet against the year-long, post-coup crackdown launched by President Tayyip Erdogan's ruling AK Party.
"The last day of our Justice March is a new beginning, a new step," said Kilicdaroglu, a bespectacled, 68-year-old veteran politician. "Rights, law, justice," the crowd chanted back.
He called on the government to lift a state of emergency enforced after the abortive July 2016 coup, release scores of journalists from prison and restore the independence of Turkey's courts.
Kilicdaroglu, head of the secularist Republican People's Party (CHP), launched his protest last month after the jailing of a fellow parliamentarian for 25 years on spying charges.
Enis Berberoglu was the first CHP lawmaker to be imprisoned in the purge. About 50,000 people have been arrested and 150,000 state workers including teachers, judges and soldiers, have been suspended.
"The era we live in is a dictatorship," Kilicdaroglu said.