The Future of Latin America

107 replies to this topic

If the Socialist Party actually does return to power and staves off another coup, that'll be it. It'll be the final bit of evidence that American hegemony is ebbing hard if we can't even crush some pinkos in our backyard.

It is interesting that even the Trump administration isn't publicly treating this as an example of the weakening of American hegemony, but rather seems to be grudgingly willing to accept this as a victory for democracy.

(AP) The Trump administration, which celebrated Morales’ departure as a watershed moment for democracy in Latin America, has been more cautious as Morales’ handpicked successor surged in the polls. A senior State Department official this week said the U.S. is ready to work with whomever Bolivians select in a free and fair vote.

As the above cited article points out, part of the problem was the reluctance of Morales himself to accept term limits.  So, it is legitimate to treat this as a victory for democracy to be celebrated by both the left, and in regards to the rule of law regarding term limits, the right as well.  Let us hope that a government led by Luis Arce can avoid the corruption that sometimes plagues governments of both the left and the right  Let us also hope that the U.S. really will "work with whomever Bolivians select in a free and fair vote."

Here is more, by way of commentary, on the election result in Bolivia.

Bolivians Return Evo Morales’s Party to Power One Year After a U.S.-Applauded Coup

(Intercept) It is difficult to remember the last time a U.S.-approved military coup in Latin America failed so spectacularly. Even with the U.S.-dominated OAS’s (Organization of American State's) instantly dubious claims of electoral fraud, nobody disputed that Morales received more votes in last October’s election than all other candidates (the only question raised by the OAS was whether his margin of victory was sufficient to win on the first round and avoid a run-off).

…The West’s reaction to the 2019 Bolivian coup featured all of its classic propaganda tropes. Western officials, media outlets, and think tank writers invoked the standard Orwellian inversion of heralding a coup of any democratically elected leader they do not like as a “victory for democracy.” In this warped formula, it is not the U.S.-supported coup plotters but the overthrown democratically elected leader who is the “threat to democracy.”

…Ever since Morales’s election victory almost exactly one year ago today, Bolivians never stopped marching, protesting, risking their liberty and their lives — even in the middle of a pandemic — to demand their rights of democracy and self-governance. Leading up to the election, the coup regime and right-wing factions in the military were menacingly vowing — in response to polls universally showing MAS (the Movement Toward Socialism political party)  likely to win — that they would do anything to prevent the return to power of Morales’s party.

At least as of now, though, it looks as though the margin of victory delivered to MAS by the Bolivian people was so stunning, so decisive, that there are few options left for the retrograde forces — in Bolivia, Washington, and Brussels — which tried to destroy the country’s democracy. Anyone who believes in the fundamentals of democracy, regardless of ideology, should be cheering the Bolivians who sacrificed so much to restore their right of self-rule and hoping that the stability and prosperity they enjoyed under Morales expands even further under his first democratically elected successor.

Yet another reaction against US hegemony

Chileans poured into the country’s main squares on Sunday night after voters gave a ringing endorsement to a plan to tear up the country’s Pinochet-era constitution in favour of a new charter drafted by citizens.

(Common Dreams) Guatemalan President Alejandro Giammattei said he was reviewing possible changes to the country's 2021 budget, which was passed last week and included massive cuts to education and healthcare funding, after outrage over the plan led an estimated 10,000 people to demonstrate in the nation's capital, with some setting fires at the congressional building.

As the country recovers from Hurricanes Eta and Iota, which hit within days of one another and displaced thousands of people, and copes with the coronavirus pandemic, legislators made drastic cuts to education spending, aid for Covid-19 patients and people suffering from hunger and malnutrition, and funding for human rights agencies—while adding $65,000 to the budget for their own meal stipends.

"We are outraged by poverty, injustice, the way they have stolen the public's money," psychology professor Rosa de Chavarría, who attended the demonstration, told the Associated Press.

The protest included a peaceful march in the center of Guatemala City, with demonstrators calling on all lawmakers to resign and carrying signs that said they have "neither a president, nor a Congress." About 1,000 people gathered outside the Congress, where some broke windows and lit fires in some of the legislative offices.

Firefighters quickly put out the fires, which did not cause any reported injuries, while police officers sprayed tear gas at protesters. About a dozen protesters were injured in the clashes with police.

Protesters in Guatemala brought a guillotine to Congress 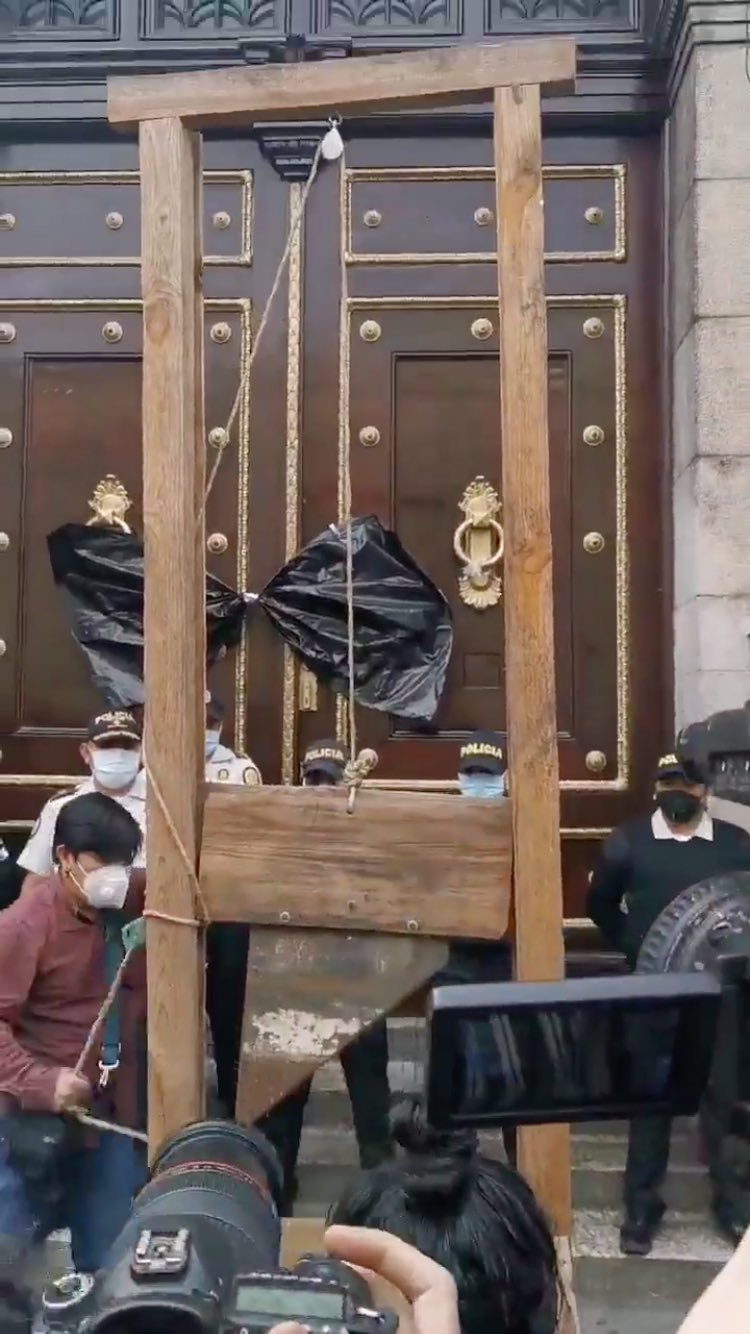 (Common Dreams) Lawmakers in Argentina on Friday approved a new one-time levy on the country's richest citizens to raise money to address the devastating health and economic consequences of the ongoing coronavirus crisis.

Senators passed the bill, which imposes a tax of at least 2% on individuals with assets worth more than $2.45 million, by a margin of 42 to 26, Reuters reported Saturday.

Government revenue has declined amid the Covid-19 outbreak and resulting lockdown measures, and proponents of the legislation—dubbed the "millionaire's tax"—hope it will generate $3.7 billion for the pandemic recovery process.

"This is a unique, one-time contribution," said Senator Carlos Caserio, a member of the committee responsible for the bill, according to a statement on the Senate's website, Bloomberg reported Saturday.

"We're coming out of this pandemic like countries come out of world wars, with thousands of dead and devastated economies," Cesario added.

While presented as a one-time measure, one wonders if this is a sign of an increased willingness to embrace policies of the left throughout Latin America.

Maduro Claims landslide in Venezuelan Elections Condemned by the West

Dec. 7 (UPI) -- Venezuelan President Nicolas Maduro has claimed a landslide victory in National Assembly elections viewed as illegitimate by much of the Western world, dealing a blow to U.S.-backed opposition leader Juan Guaido.

The names of Guaido and other opposition lawmakers were absent from the ballot as they boycotted the vote and instead sponsored a weeklong referendum calling for Venezuelans to reject Maduro's "usurpation of the presidency."

Only 31% of eligible voters cast ballots in the election, according to Alfonzo.

Maduro described the elections Monday in a speech as having been free, democratic and a victory over the United States' sanctions, according to the Venezuelan Ministry of Foreign Affairs.

Another sign that Latin America may be lurching to the left, or just an indication that a different kind of authoritarianism may be taking root?