122 replies to this topic

Getting off Mr. Bones' wild ride before it crashes I'd guess..... if this forum is slightly accurate.

Speaking of which how are Australian politics going?

You really, really want that to happen, don't you.

I loudly predicted the second wave of the Global Financial Crisis would begin by the 31st of March 2017. But I was wrong! Observe my well-deserved public humiliation here, here and here. Let this be a warning to all of you who try to guess the future. Yes, that means you, reading this now! Put that prediction back in your pocket! Do it now, before it's too late! (Also check out my userpage, it's even funnier.)

I'm surprised we didn't have this thread before now, especially considering the horror that was Tony Abbott several years ago. Time for some thread merging!

Prime Minister claims laws of mathematics 'do not apply' in Australia

Australian Prime Minister Malcolm Turnbull has said the laws of mathematics come second to the law of the land in a row over privacy and encryption.
Under new legislation proposed by the Australian Government, messaging apps like WhatsApp and Apple’s iMessage would be forced to hand over the contents of encrypted messages.
When challenged by a technology journalist over whether it was possible to tackle the problem of criminals using encryption – given that platform providers claim they are currently unable to break into the messages even if required to do so by law – the Prime Minister raised eyebrows as he made his reply.
“Well the laws of Australia prevail in Australia, I can assure you of that. The laws of mathematics are very commendable, but the only law that applies in Australia is the law of Australia," he said.

Prime Minister claims laws of mathematics 'do not apply' in Australia

Damn, I'm guessing the laws of physics don't apply in the land down under either. The next step is to build a time machine, go backwards in time, and claim Australia's rightful victory in the Emu War of 1932.

Australia is set to announce the country’s first space agency. Although the emphasis will apparently be on the commercial utilization of space, researchers are hoping there will be purely scientific efforts as well.

The government plans to provide AU$38 million in “seed money” to get the agency up and running, Australian media reported today. Officials are expected to formally announce the move on 8 May.

Geologist Megan Clark will lead the new agency, according to reports. She was formerly chief executive of Australia’s Commonwealth Scientific and Industrial Research Organization in Canberra, the country’s network of laboratories. She also led an expert panel that the government created last year to explore the idea of establishing a space agency.

Researchers are applauding the pick. Clark “can be trusted to set the agency up in the right direction,” says Anna Moore, an astronomer at Australian National University (ANU) in Canberra.

Despite the modest funding and emphasis on applied technology, the decision to establish the agency “is a major landmark for Australian industry and science,” says Peter Quinn, an astronomer and executive director of the International Centre for Radio Astronomy Research, a joint institute of Curtin University and the University of Western Australia, both in Perth. 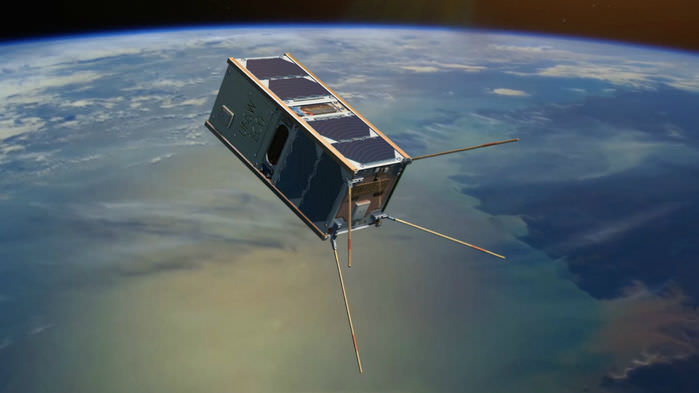 Just plain evil. Who votes for these crazed, abominable fiends?

More of the Great Australian Bight opened to oil and gas

The government has released a new acreage for offshore oil and gas exploration in the Great Australian Bight that green groups says should have been kept off limits after it was cancelled by BP.

The permit is one of two that BP cancelled after the company abandoned its plans for oil and gas drilling in the bight in 2016. Its remaining two permits were sold to the Norwegian oil and gas multinational Statoil.

On Tuesday the government released 21 new acreages that petroleum companies will be able to bid for across six basins off Western Australia, South Australia, Victoria and the Ashmore and Cartier Islands.

The announcement came as protesters gathered outside the Australian Petroleum Production & Exploration Association’s annual conference in Adelaide to oppose new oil and gas drilling in the bight. Later on Tuesday, Kangaroo Island’s mayor, Peter Clements, was speaking at Statoil’s annual general meeting in Norway to highlight community opposition to the project.

The Wilderness Society said on Tuesday that the government was “acting insanely in trying to push oil and gas exploration in the Great Australian Bight” in waters that were pristine and where development was risky.

Australia’s greenhouse gas emissions continue to soar, increasing for the third consecutive year according to new data published by the Department of Environment and Energy.

The Turnbull government published new quarterly emissions data late on Friday which reveals Australia’s climate pollution increased by 1.5% in the year to December 2017.

The expansion in LNG exports and production is identified as the major contributor to the increase, but the data shows a jump in emissions across all sectors – including waste, agriculture and transport – except for electricity, the one area that recorded a decrease in emissions.

In particular, the department’s data shows a 10.5% increase in fugitive emissions from the production, processing, transport, storage, transmission and distribution of fossil fuels such as coal, crude oil and natural gas, driven by an increase of 17.6% in natural gas production.

It comes at a time when the government has been pressuring states and territories to lift bans on fracking for new unconventional gas development and just weeks after the Northern Territory announced it would end its ban on fracking. 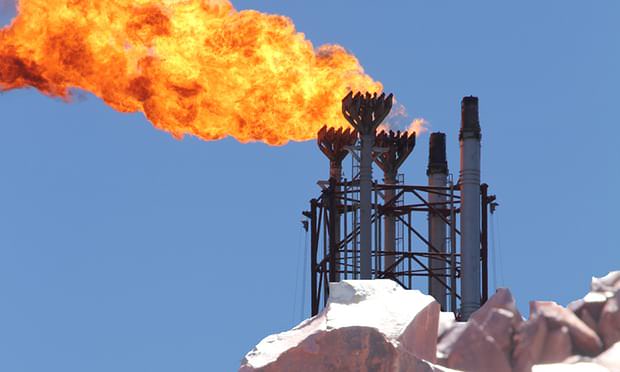 A secret Australian investigation uncovered a campaign by China to infiltrate the country's major political parties, a news outlet has reported, in the latest allegation of Chinese interference likely to strain relations between the trading partners.
The probe ordered by Prime Minister Malcolm Turnbull revealed a decade-long effort by the Chinese Communist Party to compromise Australia's political process and influence policymaking, 9 News reported on Monday.
The findings of the review by the Australian Security Intelligence Organisation and the Department of Prime Minister and Cabinet reportedly prompted Turnbull's proposal last year of pending anti-foreign interference laws that have tested ties with Beijing.
Australia's ties with China, its biggest trading partner, have reached a nadir over alleged meddling. In recent months, Beijing has been accused of interference including cultivating Manchurian candidates for office, kidnapping dissidents, leaning on local Chinese-language media and spying on Chinese students studying here.

'Arrogant' Australia needs to be taught a lesson: China

Malcolm Turnbull insists Australia has a "good, frank" relationship with China, but Communist Party mouthpiece The Global Times says it's time the country was taught a lesson.
The newspaper's editorial said it would make sense to cut Australian wine and beef imports to do a better deal with the United States.
"It is necessary for China to leave Australia hanging for a while, instead of being too quick to bury the hatchet whenever Canberra tries to put a smile on its face," the Global Times argued on Wednesday morning.

"China does not have to throw away Sino-Australia relations. China just needs to slow their relationship for a period."

You see, this sounds par for the course for an authoritarian nation like China though I still think it sounds childish. The reason why people mock Trump for making similar statements is because we're supposed to be a beacon of democracy, republicanism, and Western values.

CANBERRA, Australia (AP) — An Australian man who alleges Google defamed him on Wednesday won a court battle to sue the search engine giant.

Milorad “Michael” Trkulja was shot in the back in 2004 in a restaurant in Melbourne, Australia’s second largest city.

The Australian High Court unanimously ruled in favor of Trkulja, supporting his allegation that a Google search of his name could indicate to an ordinary person he was “somehow associated with the Melbourne criminal underworld.”

Trkulja had successfully argued in the Victoria state Supreme Court in 2012 that Google defamed him by publishing photos of him linked to hardened criminals of Melbourne’s underworld.

Four years later, the Victorian Court of Appeal overturned the decision, finding the case had no prospect of successfully proving defamation. The High Court disputed that ruling and ordered Google to pay Trkulja’s legal costs.

Australians' trust in the United States as a world leader has dropped to a record low as two out of five people consider President Donald Trump a "critical threat" to Australia's interests, according to the latest Lowy Institute poll. The annual poll from the policy think tank surveys attitudes on a range of topics including world affairs, foreign leaders, climate change, immigration and democracy.

A dry winter has intensified what has been called the worst drought in living memory in parts of eastern Australia.

NSW produces about a quarter of Australia's agricultural output. It was officially listed as "100% in drought" on Wednesday.

Less than 10mm of rain was recorded in parts of NSW in July, and drier than normal conditions are forecast in coming months.

On Wednesday, officials said 23% of NSW was classified as being in "intense drought", with the remainder in drought or drought-affected. 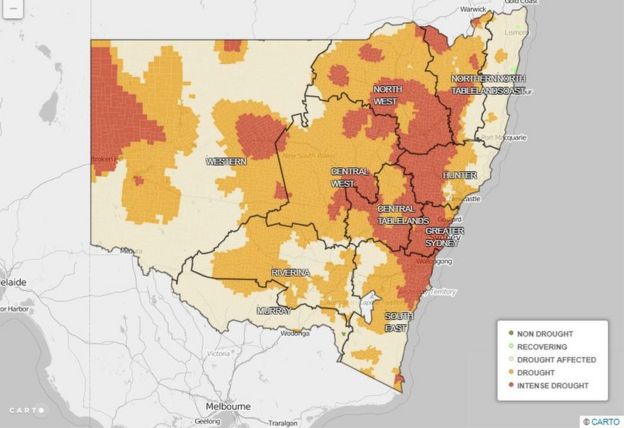 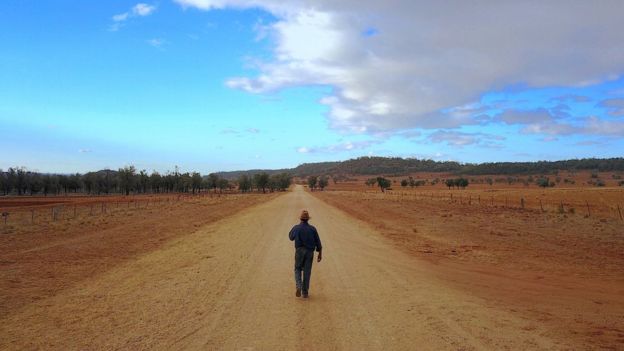 Can Aboriginal ecotourism save communities as companies eye land?

The group is a mix of Australian and international visitors, all having travelled significant distances to be here in Broome, the biggest township in the Kimberley region of northwest Australia.

On Pigram's "Narlijia Cultural Tours", guests are invited to learn about the culture of the Traditional Owners of the Broome area, the Djugun-Yawuru people.

As a descendant of thousands of years of local Aboriginal history, Pigram told Al Jazeera he wants to be able to preserve the past and help pass it on to future generations.

"We live in one of the last pristine places in the world," he said. "We should be doing all we can to protect it and share it with those who come and visit." 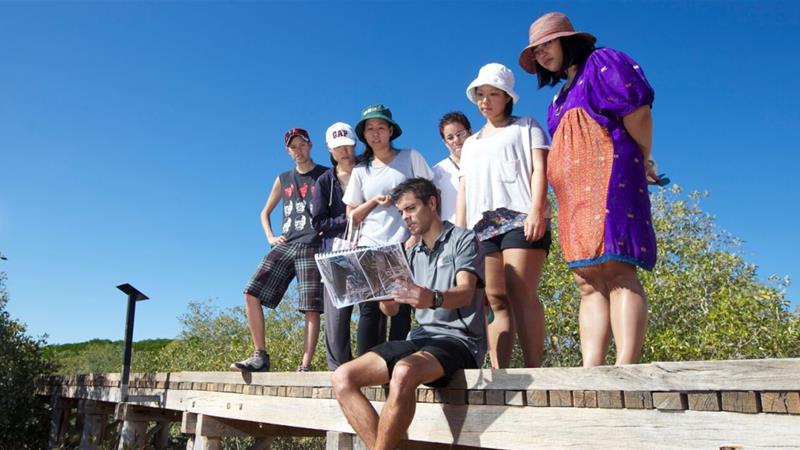 Bart Pigram, who runs Narlijia Cultural Tours, is pictured with a group of visitors.

A dry winter has intensified what has been called the worst drought in living memory in parts of eastern Australia.

NSW produces about a quarter of Australia's agricultural output. It was officially listed as "100% in drought" on Wednesday.

Less than 10mm of rain was recorded in parts of NSW in July, and drier than normal conditions are forecast in coming months.

On Wednesday, officials said 23% of NSW was classified as being in "intense drought", with the remainder in drought or drought-affected.

The "good" news is that farmers are beginning to acknowledge climate change as the culprit and are starting to demand action.

“Give me time and I’ll give you a revolution.”
- Alexander McQueen
Back to In The News & Current Events