A Brief History of the Elonic Church

Part I: One Lost Martian

Elonism, the veneration of Elon Musk as a divine being, was one of the largest and longest-lasting religions in human history, and among the first of the new Spacer Faiths that arose in the early third millennium AD to compete with traditional Earth-based religions. However, the grand Holy Expeditions, before the star-spanning Elonic Empire, before even the Order of St. Elon, it began with two disillusioned citizens on Colonial Mars, in the decades after Elon's death--or transcendence to another realm, depending on who you ask.

Vesta Adams was just another woman at mission control, guiding the rockets to land and take off every day at the spaceport at Arcadia Planitia. She was the sort you wouldn't tend to notice, average-looking and soft-spoken, in her middle fifties, who came to Mars with her parents as a child, and had only a small circle of close friends. Little is known why, in 2128, she suddenly announced a lengthy leave of absence and took off in a vintage rover across the wilds to Lunae Planum. Perhaps it was a midlife crisis, perhaps a backlash against boredom and monotony, perhaps something else entirely. St. Vesta was never the sort to keep a journal, nor the type to open up about her private life in interviews.

During her vacation, she came to Mars Base Alpha, the first settlement on Mars. Even now, as a large town of 10,000, it maintained the gritty, base-camp-on-the-frontier vibe that it had had for a century. We know she was deeply moved by the centennial exhibitions that were on display at the time, as well as the old cemetery, where the first settlers on Mars were laid to rest decades ago. She found herself spending many hours wandering the paths of that cemetery, noting the names of the great heroes who first set foot on the Red Planet, and taking in the holographic exhibits detailing their exploits. It was by the mightiest and most ornate grave of all, the tomb of Elon Musk himself, where Vesta at last met another wanderer. 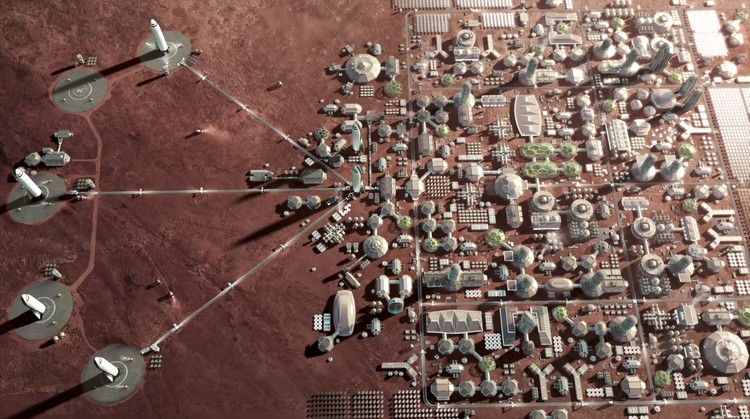 The Old Town at Mars Base Alpha. Credit: SpaceX. The cemetery is a mile beyond the launch pads.

I don't have a picture for this, but St. Elon's Day (known as High Elon's Day in the Divinni sects) is by far the most important holiday to the Elonites and is almost universally celebrated. It is celebrated on the first Sol of the Elonic year--the Elonic calendar is the same on every world, using Martian time, with 0 AE being the year that the first Terrans were sent to Mars by High Elon.

St. Elon's Eve, which comes right before St. Elon's day, is a time of quiet meditation and reverence. Elonites will fast for the half-Sol prior to the beginning of St. Elon's Day and temporarily abandon any work or other worldly tasks. The highly devout spend the whole of St. Elon's Eve sitting in darkness to emulate the darkness of space and burning their sacred rocket candles, praying, philosophizing, and pondering Elonic lore. Average Elonites merely spend an extra hour or two in prayer.

But as soon as St. Elon's Day arrives, the wild festivities begins. On countless worlds, sophonts descend by the millions upon the Grand Planetary Temples where the world's Elon personally leads the vast horde in prayer. And at particularly holy sites, like the Grand Supreme Mega-Temple at Elonia (Wolf 1061 c) or at the First and Most Sacred Temple near St. Elon's tomb on Mars, there aren't just millions of worshipers on this holy day, but billions, flowing beyond the confines of the temple and literally stretching beyond the horizon. In places with a large Elonic population, the Elons and priests must often temporarily clone themselves to be able to give due attention to the crowds of worshippers.

After prayer, the temples will light up their Elonic rockets--replicas of the Falcon rockets and the BFR--burning their rocket fuel high above like colossal candles. (These rockets are typically attached to some surface within the temple and thus don't take off, so they can be reused next St. Elon's Day, for after all, the Elonic rockets were always meant to be reusable.) Meanwhile, a Saintmind--a high-quality copy of St. Elon himself--or several will appear, provided the site is major enough or holy enough to merit their attention. The Saintminds will mingle with the crowd, blessing those who deserve it, endorsing prayers they deem worthy, and answering questions for those in doubt about matters of faith.

Meanwhile, the fast is broken with a glorious feast created from the nanofabbers in the temple, while Elonic bands blast deafening rocket music that can be heard for kilometers around. And finally, once the hours and hours of celebration come to an end, it is time for young Elonites at the age of 20 to complete their coming of age ceremony. Those who can afford it are anointed with methalox by an Elon or even a Saintmind and blasted into orbit in a personal Elonic rocket to take in the wonders of space. Others simply receive a blessing from a lower level priest and travel to space with dozens of others in a sardine can of a suborbital rocket or star tram or space elevator, to briefly see space and feel freefall before coming back to the ground.

St. Elon's Day concludes with the Launching of the Teslas, a ritual in which one replica Tesla--or sometimes many, the Grand Supreme Mega-Temple launches over 3000--are launched to space in Falcon Heavies while the Elon leads the crowd in chanting a solemn hymn known as "Space Oddity" and all Elonites reaffirm their allegiance to the Elonic Faith.

EDIT: Thanks OrbitalResonance. An example of the Launching of the Teslas, observed by several nobles on Elonia in AD 2914. The man in the middle holds a jar of holy rocket fuel--adding a bit of fuel blessed by an Elon is said to ensure a safe journey for any rocket.

Also tagged with one or more of these keywords: elonic church, st. elon, religion, fiction