83 replies to this topic

﻿In Major Step, Europe Sets Up an EU Prosecutor’s Office

Aw man, they're going to make a "United states of Europe" (or equivalent thing with different name) without us now.

We're going to be the USE's Mexico! They'll steal all our most talented people and set up horrible destructive industries in our crappy tax haven with no workers rights.

I'm not sure how they'll destroy our country with drug wars? They'll find a way though!

(Sorry if I have offended any Mexicans? Not saying their country is a crappy tax haven with no workers rights)

Mexico is considered a tax haven?


The European Union announced Friday it will require a visa for Americans traveling to Europe as of 2021.

U.S. nationals crossing the pond will need a passport and a credit or debit card to apply for a European Travel Information and Authorization System (ETIAS) permit that will allow them to visit Europe for less than 90 days.

Previously, Americans had been exempt from visa requirements when traveling to EU nations.

The ETIAS system is similar to the Electronic System for Travel Authorization (ESTA) system the United States uses for countries in the Visa Waiver Program, which covers all EU countries except for Cyprus, Poland, Croatia, Bulgaria and Romania.

ETIAS and ESTA don't require consular interviews nor the same degree of background checks as regular visas, but do require a payment and registration prior to travel.

Helicopters sent to rescue 1,300 passengers from cruise ship off Norway

Rescuers are scrambling to rescue about 1,300 passengers and crew from a cruise ship off Norway that suffered an engine failure, emergency officials said Saturday.

The Viking Sky ship sent a distress signal Saturday due to "engine problems in bad weather," said Borghild Eldoen, a spokeswoman for the Joint Rescue Centre for Southern Norway.

The vessel is in rough seas in the Hustadvika area on the western coast of Norway and rescuers are facing waves of about 6-8 meters (roughly 19-26 feet) high, she said.

Helicopters airlifted passengers and crew members one by one Saturday and the process could continue overnight and through Sunday. 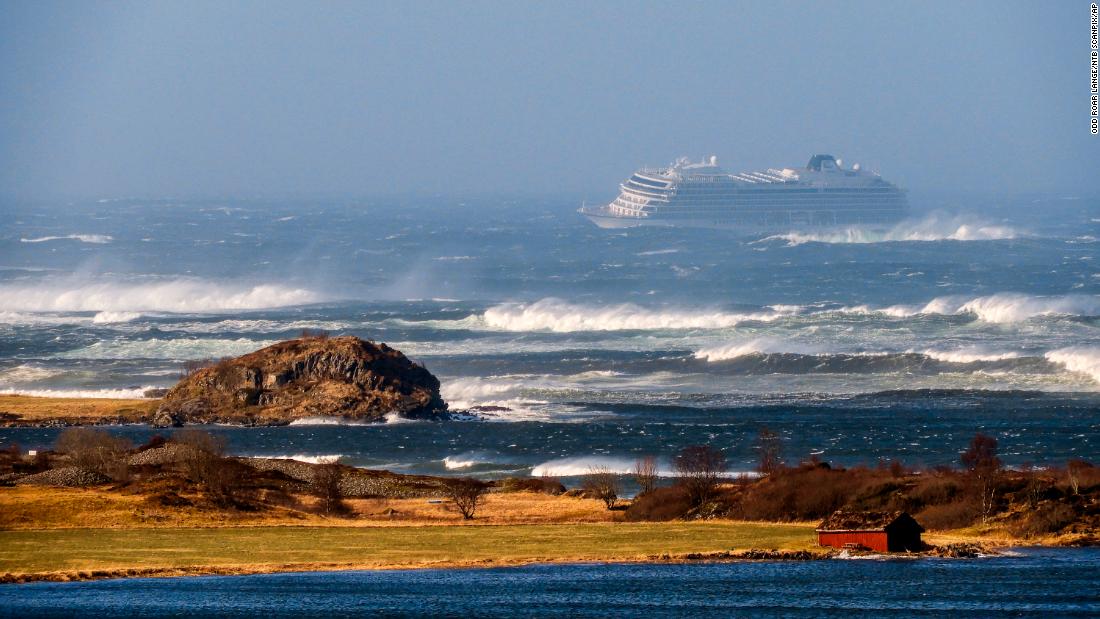 The European parliament has voted to scrap the twice-a-year custom of changing the clocks by an hour in spring and autumn by 2021, leaving only national governments to now give their assent.

The change would apply to the UK if it stays in the EU, and also during an extended transition period that is part of Theresa May’s Brexit deal.

Member states would be able to choose whether to remain on “permanent summer” or “permanent winter” time under the draft directive, which passed by 410 votes to 192.

All the more reason to stay in the EU, Britain! 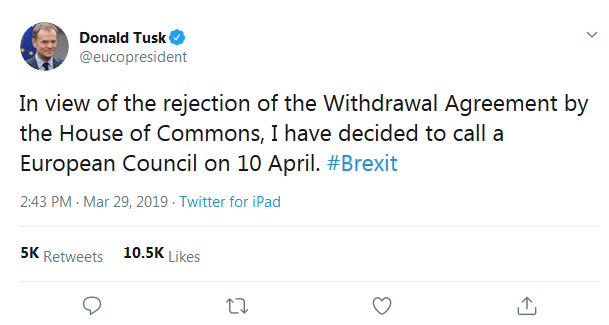 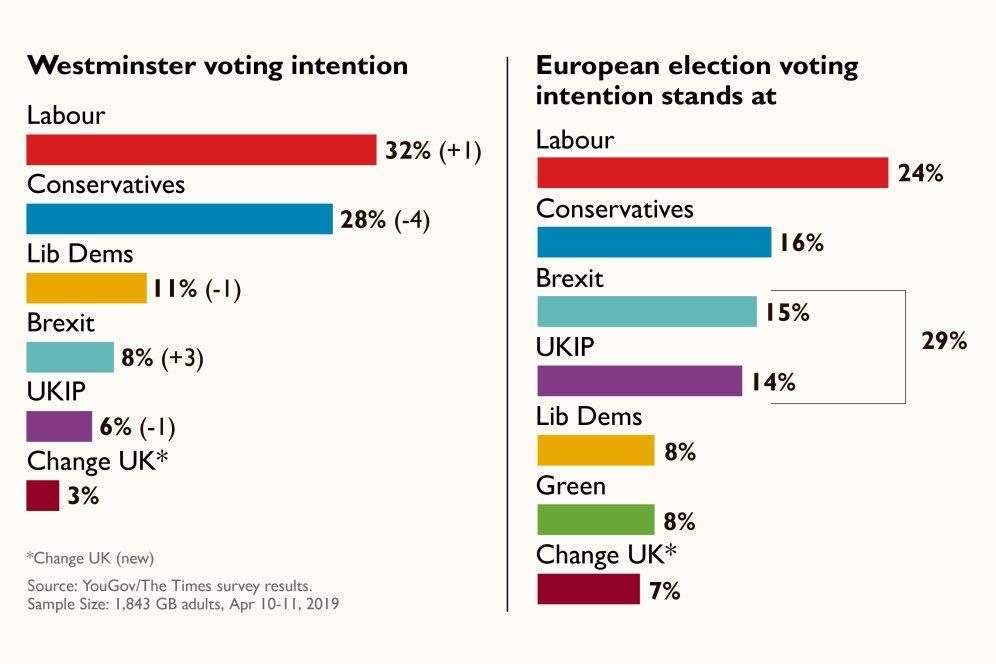 Finland may usher in its first leftist prime minister in two decades in parliamentary elections on Sunday, as voters worry over the future of their welfare system amid the rising costs of caring for a rapidly ageing population.

But if opinions polls are correct, the left-leaning Social Democrats’ ability to govern may be hampered by a surge in support for the Finns party, a nationalist group riding a wave of anti-immigrant sentiment sweeping the Nordic countries.

A survey commissioned by public broadcaster Yle showed the Social Democrats could win the top spot with 19% of the vote, giving their leader, Antti Rinne, the first shot at forming a government.

The Finns party is running close second with 16.3% support, after securing rapid gains since the start of the year when a series of cases of sexual abuse of children by foreign men emerged.

Russia can f**k right off.

241m Europeans 'may have received Russian-linked disinformation'
Wed 8 May 2019 10.23 BST
Around half of all Europeans could have been exposed to disinformation promoted by social media accounts linked to Russia before the European elections, an analysis suggests.
Evidence of 6,700 so-called “bad actors” posting enough content to reach up to 241 million users was discovered by researchers examining the scale of the threat.
There was no “all-purpose” content but locally created material was being amplified to craft a narrative for each EU member state, according to the study of a 10-day period from 1 to 10 March.
The report’s authors found specific evidence of malign actors seeking to shape specific news developments in Europe, including the debate over whether the Commons should back Theresa May’s Brexit deal during which divisive content was actively spread.
https://www.theguard...-disinformation

Most users, and those who're most vulnerable to deception etc. will just use number 1.

Ban all paid political advertising from all versions of facebook.

The Tories have destroyed themselves.

And the Brexit Party is basically fascist. 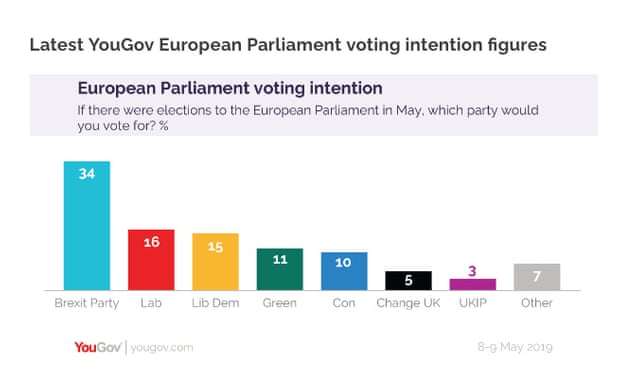 Eh, I think part of the issue is that no one on any side has a real plan for what their MPS will do in Europe (except maybe the greens?).

So this vote doesn't necessarily reflect anything like the results of an election etc. Its basically a brexit poll with stupid options.

This proves that the conservative's handling of Brexit is not very popular with anyone. Not a major surprise.

This EU election will be voted on by mostly:

A) People who think Brexit has been "stolen" or "betrayed" and want to register their anger, who will vote Brexit party, or UKIP if they're more racist.

B) People who want remain and see this as a chance to show that the weighting has changed since the referendum.

Anyone who thinks brexit is going to happen, or who doesn't care will not bother voting which will probably be a lot of people.

The UK has never cared about Europe. So people are happy to throw their vote away to make a point. When they are back in the "vote conservative or labour will win" situation of normal elections they'll be loyal Tories again.

Voter Turnout for EU elections from UK (or "the only definitive stats we have on how much the UK cares about Europe"):

wow we really couldn't be bothered in 1999, what happened then? Was the football on?

Marine Le Pen’s far-right party edged just ahead of the centrist alliance of President Emmanuel Macron in exit polls as French voters led what pollsters expected to be a nationalist surge in an EU parliament election on Sunday.

The defeat for the president was narrow amid a sharply increased turnout that was matched across the continent in what Brussels is portraying as a positive sign, in spite of gains for anti-EU groups.

But it was a bitter blow for those who hope the French leader can inspire Europeans to embrace the Union as an answer rather than as part of the problem in the face of social change that has bewildered and frustrated some voters.

By MIKE CORDER 56 minutes ago

BRUSSELS (AP) -- Across Europe, anti-EU populists and proponents of closer unity made a final push for support Sunday as 21 nations went to the polls in a continent-wide battle for influence at the European Parliament.

Right-wing nationalists who want to slash immigration into Europe and return power to national governments are expected to make gains, though mainstream parties are tipped to hold onto power in the 751-seat legislature that sits in both Brussels and Strasbourg.

The election began on Thursday, but most of the EU's 28 member states, including the biggest of all, Germany and France, are voting on Sunday, and the results are expected overnight. Some 426 million people are eligible to vote.

"I don't want to see a right-populist Europe (that) wants to destroy the idea of togetherness," said Manfred Weber, the lead candidate of the Christian Democrat center-right EPP group, currently the biggest in the legislature.

An insurgent Brexit party and reinvigorated Liberal Democrats have delivered a harrowing night for the Conservatives and Labour at the European elections, prompting profound soul-searching at the top of both major parties.

Nigel Farage’s Brexit party humiliated the Conservatives in their rural heartlands but also made sweeping gains in cities such as Cardiff, Leeds and Sheffield, as well as in Hillingdon, the home of Boris’ Johnson’s seat where the Tories were pushed into fourth.

The night also confirmed an extraordinary revival of the Lib Dems, who overtook the Tories in Theresa May’s Maidenhead seat and came first in Jeremy Corbyn’s north London home of Islington.

Overnight, the Brexit party gained 28 seats, with the Lib Dems in second on 15 seats, Labour held 10, having lost seven so far, the Green party held seven, a gain of four, and the Tories were languishing in fifth place, with just three seats.

Good to see Labour get the kicking they deserve.

Two women have been backed by the EU’s leaders to head the European commission and European Central Bank, breaking with more than 60 years of male dominance at the top of the bloc’s institutions.

After three days of tortuous negotiations, Germany’s defence minister, Ursula von der Leyen, received the support of heads of state and government to replace Jean-Claude Juncker as president of the commission in Brussels. And the French managing director of the International Monetary Fund, Christine Lagarde, will move to Frankfurt to take over from Mario Draghi as the first female president of the ECB.

'Greta Thunberg effect' blamed for surprise Austrian election result
September 30, 2019 — 12.35pm
Vienna: Two days after rallying 7 million protesters across the world by invoking the threat of climate change, Greta Thunberg was credited for motivating voters to redraw the political landscape in Austria.
After being frozen out of parliament just two years ago, the Alpine country's Greens unexpectedly tripled their support in Sunday's election to win 14 per cent of the vote, according to preliminary projections. The result sets up the group as a viable coalition partner for Sebastian Kurz's People's Party and shows how environmental concerns are moving to the top of the political agenda in Europe.
"The thematic development really helped the Greens, I'm thinking here of Greta Thunberg and the climate protests," Social Democrats Managing Director Thomas Drozda said in an ORF television interview conceding defeat. "This is an area where the Greens have had credibility for the last 20 or 25 years."
https://www.smh.com....930-p52w86.html