84 replies to this topic

A capitalist would find a Communist opinion insulting.

A democrat (not the US party) would find a anti-democratic opinion insulting.

A conservative would find a liberal opinion insulting.

Vice-Versa for all of these.

Pisiu, as a fellow australian, you really should be proud to live in a country that has a system in place to help the lives of those who , through no fault of their own, were born with such disadvantages.

In some cases, it's their parents fault, they could've terminated the fetus or (in the case of unhealthy parents) could have chosen not to reproduce at all.

Im starting work in aged care and disability next month and reading this just shows how far we as a species we have to go.

"Just shows how far we as a species we have to go."

You only consider that to be a waste of resources because you yourself do not suffer from the type of handicap that you discuss.

I don't consider it a waste of resources because of that reason, but what does it matter? Anyone born in a different time, different family, or different situation would have a different opinion then they have now.

Hey caltrek, you only consider eugenics bad because you were worn into a society/country which falsely states that All men are equal.

Doesn't make much of a valid argument, does it?

Here, perhaps this will help you to sort out your needs:

I'm sorry caltrek, I misinterpreted this reply, I thought you mean I should check which one of these needs I was missing, I took that as an insult, now I understand that you were talking about the needs of the disabled people.

It is clear that Semites are the most supreme of any race. 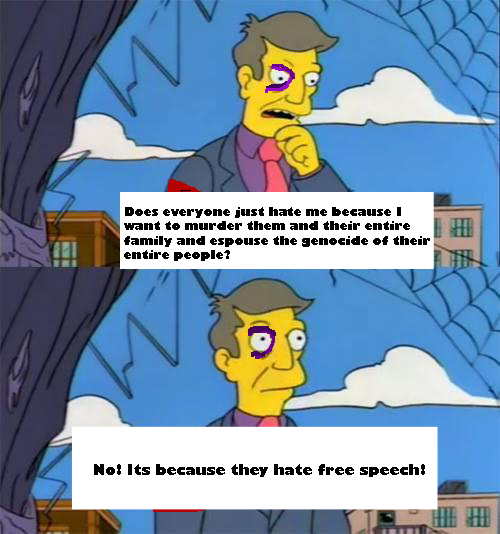 First of all, could you cite your source?

In reference to the Chinese and Japanese being so far ahead, that has to do with their culture, not their race.  The parents in those countries push their kids very hard to study and do good.  Also, Their languages are much better for math and science than ours.  Otherwise, I don't see any evidence to suggest that any one race is scientifically better than any other.

Ok, there has been a lot of talk about Eugenics, but I want to discuss the other focus of this thread. I am open to your ideas(Pishu) about how any race could be scientifically inferior to any other race.

Lol, pisiu, you are so aussie!

It is clear that Semites are the most supreme of any race.

You don't understand statistics. Track iqs against development and shocker you'll find they're lower in developing regions. Here's a good reason why:

You don't understand statistics. Track iqs against development and shocker you'll find they're lower in developing regions. Here's a good reason why:

I am giving him the benefit of the doubt, that he knows this and there is some other explanation that he has for scientific racism.  This is pretty basic knowledge and logic.  I just feel bad for poor, dumb Australia, I wonder why it is like that.

^Sorry this stuff just sets me off. I don't think the chart is accurate. Glad to know it is common information.

^Sorry this stuff just sets me off. I don't think the chart is accurate. Glad to know it is common information.

I am also questioning the validity of the chart, that's why I asked for the source.

You would think everyone should realize that lower income areas have poorer education.  This applies everywhere, from international to locally.  This also explains why African-Americans commit more crimes than Caucasian-Americans.  In the 30s-70s they were only sold houses in poor quality housing in low income areas in inner-cities, while White people got the higher-income suburbs.  As a result, there are a lot of black families still living in low-income, inner-city areas, where there is poorer education, and higher crime rates.

There's also disruption to sleep, health, family, etc that come with income inequality. These all affect the developing brain particularly in developing nations where things like access to water, hygiene, nutrition, etc all affect cognitive development. These factors take generations to normalize as can be seen in this video:

Even if there are biological differences between groups of people this is not grounds for a cleansing be that in the form of a pogrom or in the form of mass sterilization. That's why i've refused to comment beyond my original comment and my sarcastic haranguing of the child posting this thread. He has not, as evinced by his writings which don't have a firm grasp on morality or human psychology, studied the underpinnings of our current legal systems and the protections it grants and upon what axiomatic understandings it does such things. Obviously he clings to moral relativism without understanding from where we draw the moralistic reasoning which are the underpinning assumptions about human rights.

Without a sound understanding of certain axioms which are imbued and furthermore imbibed by the human condition, one could further add by intelligent, conscious beings, one cannot speak of right or wrong without endless recursion. First there must be a base of consensual understanding and agreement as to what constitutes a moral imperative. That is, furthermore, without the explicit or implicit denial of who is fit to deserve said position of human and the rights entailed upon said condition or status.

Universality, utilitarianism, consequentialism, and all these other methods of analysis or implementation attempt to do much of the same which in its essence is reduce suffering or its functional equivalent maximize happiness. The possibility that the two aforementioned phrases might entail different symptomatology notwithstanding.

If I belittle you or insult you know that it do not do it without the addition of reason. If you choose to focus on the insult then that is your loss. When I say that you are not the sharpest knife in the drawer based off of your questions and what is more your apparent reasoning know that I do not do it simply to spite you but rather because I consider your intellectual position as I consider the dust on my boot: ignorant and lacking perception as to only view the shit that sits beside him day in and day out only in your case manifestly taking the form of vociferation which has not been thought out either due to mental capacity or from a lack of will to learn.

Either way when I say you would be the perfect candidate for sterilization I do not mean it as an insult, although I would feel honored if you took it that way, I say it as a perfectly logical assumption of an asinine child babbling about things which he has only the smallest grasp of the thinnest skim; of the most insignificant puddle of putrid froth of knowledge.

IQ is not influenced by education is It? That's why there can be really stupid people who know nothing with high IQs, while there can be people with low IQs who know more than someone with a higher IQ, IQ is a measure of how much Intellectual Potential and Pattern recognition a person has, it is only effected by Malnutrition, or the intake of drugs which damage the Brains mental capacity, IQ is also a great factor which determines how fast or how slow someone can learn something, it is significantly harder to learn something if you have a lower IQ.

The South African nation has an average of 77, it is presumably the most developed country in South Africa, it has a low malnutrition rate and the school system is on a Western level, so why is it's IQ so low?

Arguing with you Americans is actually impossible in the case of Eugenics or Scientific Racism, you've become so brain washed with your "All Men are Equal", "Human Right to Reproduction", these Rights are not observed in nature at all, mother nature does not care about your Human rights, they are fundamentally ignored. The notion of a human having a right just because he was born is stupid, people have to work towards their "rights", they should really be called privileges. I've heard that some people want to make The Internet and Abortions into human rights, why? Where's the line? Where do you draw the line between right and privileges? If we just continue adding "Human Rights" to the list, they will become useless, when everything is a Human Right, nothing is, you take away the speciality of the situation. Imagine if the right to internet was made a human right, what for? Are you Americans going to denounce countries in the UN assemblies just because they don't provide good internet speed to their people?

No, the notions of human rights are completely against nature, and they are bound to fail, in the quest for "equality" and "peace" you Americans have ignored the rules of nature, do you ever wonder why your nation is in so much pain? You watch as your morals and culture is ripped apart, and you just sit there and pray to singularity and say "don't worry muh god ai president in the future will save us all!!!! democratic united world!!!! yeah, we will cure and fix everything with science!!!"

Now it is clear that I do not belong on this forum, I lost all my futurist interests a long time ago, but you need to understand, Science can not and will not solve everything, we can't just hopelessly throw all our problems in the trash and say "Oh Science will solve them, if only we cut funding for everything and put it all in Science, we'd be living in the singularity now!"

I hope you all have to endure the "pain" of another Trump term (and then hopefully Joe Biden after Trump serves his 2 terms), farewell.

on the flip side authoritarianism is associated with lower iqs as are more conservative viewpoints.  It's just a way of "simplifying" narratives without really ever understanding.  Which is why I didn't want to debate with you in the first place.

It's not an American thing it is a Human thing.

The growth of computation is doubly exponential growth.
Back to The History Forum