68 replies to this topic

(Courthouse News) – Scientists have discovered the missing link between modern penguins and their ancient ancestors who lived more than 60 million years ago, identifying a new species Monday that lived beside its human-sized penguin cousins.

In a paper published in the journal Palaeontologia Electronica, researchers pieced together the fossils of the newly described Kupoupou stilwelli penguin found in the Chatham Islands near New Zealand’s South Island in the Pacific Ocean.

The species, with proportions more in line with modern penguins, appears to be the oldest link between the two. Research scientists said it lived between 60 – 62.5 million years ago when the waters around New Zealand were tropical.

“Next to its colossal human-sized cousins, including the recently described monster penguin Crossvallia waiparensis, Kupoupou was comparatively small – no bigger than modern king penguins which stand just under 1.1 metres (3.6 feet) tall,” Blokland said in a statement.

Dinosaurs may have faced volcanic climate change before the asteroid
By Michael Irving
December 16, 2019

A gigantic asteroid is usually fingered as the sole culprit in the extinction of the dinosaurs, but that isn’t the whole story. Fossilized shells from that period have now revealed that Earth’s systems were already stressed before the impact, as volcanic eruptions may have heated the oceans and raised mercury levels to dangerous heights.

Technically, dinosaurs were a victim of climate change – the question is what triggered it. An asteroid impact is only directly deadly to those animals unlucky enough to be in the direct line of fire. Instead, the majority of life on Earth would have succumbed to the effects of climate change that followed.

The impact would have kicked up huge amounts of rock and dust, which hung around in the atmosphere for years to come. Sulfuric acid would have rained down, making the oceans more acidic. Meanwhile, the dust cloud would have blocked sunlight for months, killing off many plants. Those two things together would have devastated the bottom rungs of the food chain, rippling upwards and upsetting most life on Earth.

by University of New England

Researchers have uncovered the first baby dinosaurs from Australia. The bones were discovered at several sites along the south coast of Victoria and near the outback town of Lightning Ridge in New South Wales. Some of the bones are so tiny, they likely come from animals that had died while they were still in their eggs. Slightly larger bones from Victoria come from animals that had recently hatched but were probably nest-bound.

The research was carried out by palaeontologists from the Palaeoscience Research Centre at the University of New England and the Australian Opal Centre in Lightning Ridge.

The bones come from small-bodied ornithopod dinosaurs—two legged herbivores that weighed roughly 20kg when full grown—similar to Weewarrasaurus, which was recently discovered by members of the same team at Lightning Ridge. By comparison, the baby dinosaurs were only about 200g when they died, less that the weight of a cup of water. 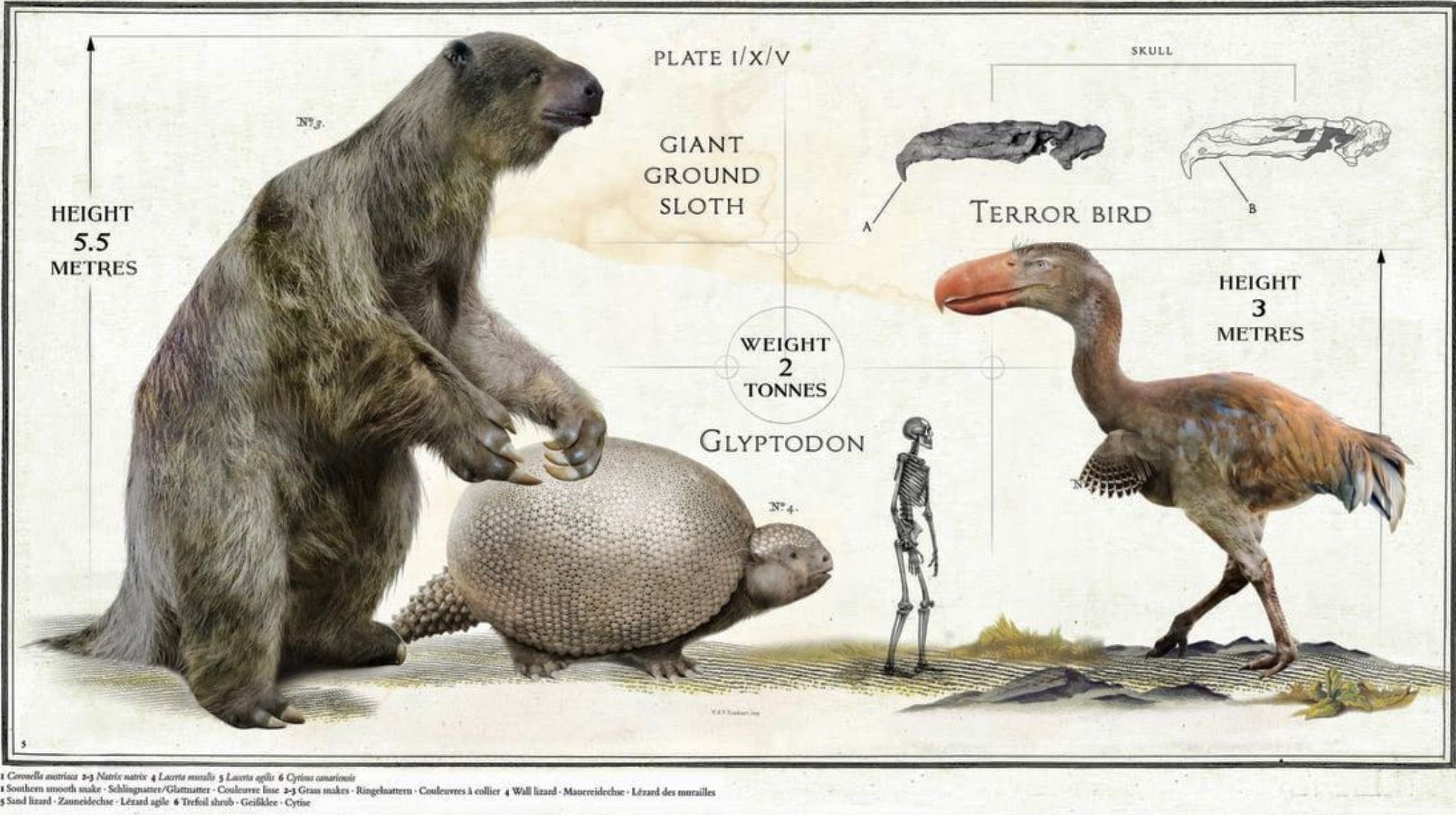 Fossils of largest theropod to date found in Australia

A team of researchers from the University of New England, the Australian Age of Dinosaurs Natural History Museum and Swinburne University of Technology, all in Australia, has identified fossils found near Winton as remains of the largest theropod found to date in Australia. In their paper published in the journal Royal Society Open Science, the group describes the bones they found and its likely species.

In 2017, a farmer in the central-western Queensland town of Winton discovered several fragmented bones on his property. Suspecting they might be dinosaur fossils, he contacted the Australian Age of Dinosaurs Natural History Museum. A team was assembled, and a dig was established. The researchers found 15 more limb and vertebrae fossils.

(Courthouse News) – Researchers have discovered new evidence adding to the idea that the mass extinction of dinosaurs was brought on by an asteroid striking Earth rather than the volcanic activity ravaging the surface.

In a study published Thursday in the journal Science, researchers analyzed well-preserved ocean drilling and global temperature records to evaluate the impact of greenhouse outgassing by volcanic eruptions millions of years ago. The team hoped to measure the effect this volcanism in the Deccan Traps had on temperatures worldwide. What they found shows that volcanic gases played a big role in supporting the rise and success of different species after the extinction, rather than causing the mass die-off.

^ Coincidence, I came here to post these images of the Deccan Traps.

The area they covered was HUGE... by far the largest amount of volcanic material emitted in the last 100 million years. 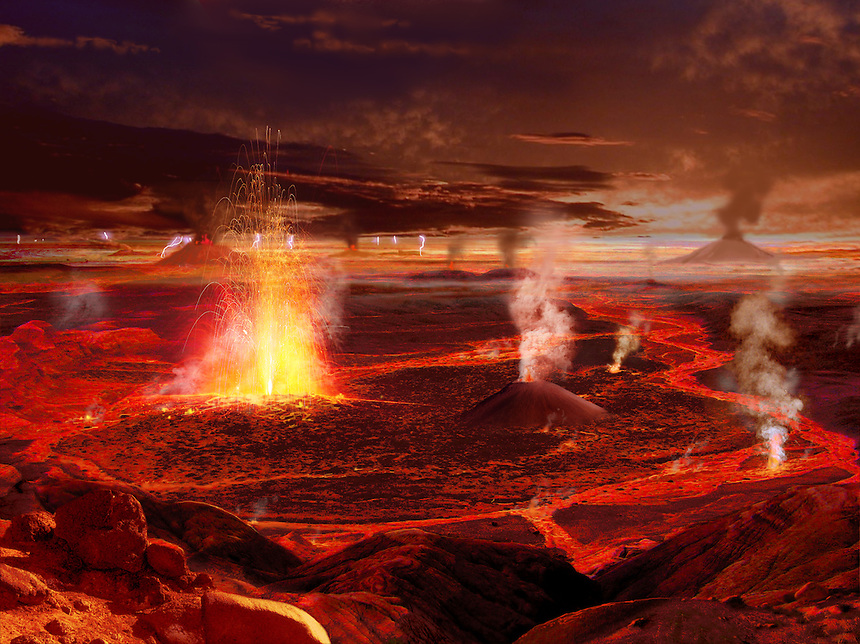 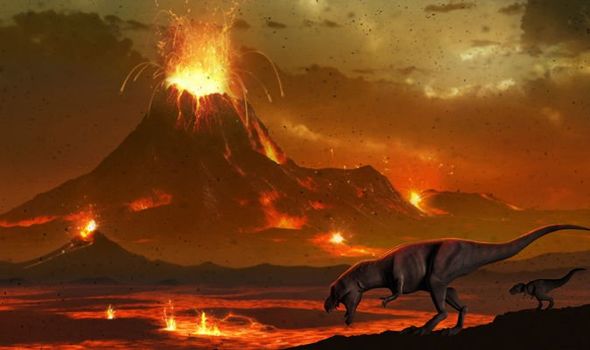 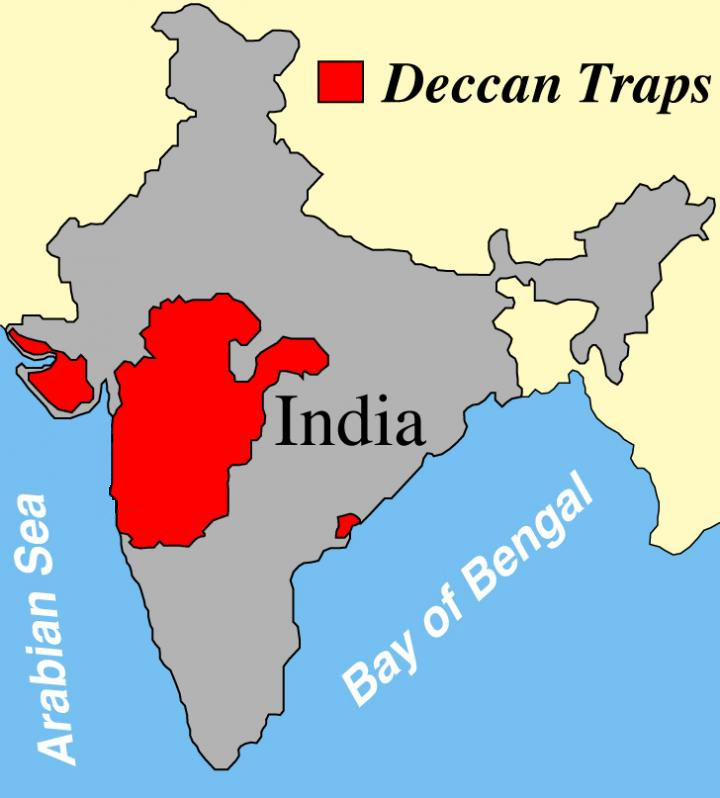 New Species of Allosaurus Discovered in Rocks of Utah

(Courthouse News) (CN) – Scientists have discovered a new species of allosaurus in northeast Utah – only the second of its kind known to have roamed what is now North America in the Jurassic period.

In a study published Friday in the scientific journal PeerJ, a team of paleontologists revealed they have identified a new species of allosauroid, a carnivorous class of two-legged dinosaurs well known for being leading predators in the Jurassic and Cretaceous periods, at the Dinosaur National Monument in Utah. While the initial skeleton of the new species – named Allosaurus jimmadseni in honor of the late Utah State paleontologist James Madsen Jr. who significantly contributed to the general understanding of the allosaurus – was discovered 30 years ago, it has never been identified as being a completely new variety of allosauroid before this announcement.

The study notes that the Allosaurus jimmadseni had numerous notable features that would have allowed it to stand out during its time on Earth. Not only did it weigh around 4,000 pounds and stretch nearly 30 feet long, it also had a uniquely thin and narrow skull with horns in front of its eye and 80 teeth in its mouth. It had surprisingly long legs and clawed arms.

One of the most significant revelations of this discovery, however, is that before this study, it was largely believed that only one other type of Allosaurus occupied North America during the Jurassic period, the Allosaurus fragilis.

Mark Loewen, co-author of the study and a research associate at the Natural History Museum of Utah and associate professor in the Department of Geology and Geophysics at the University of Utah, says that the importance of the discovery is also in the fact that the Allosaurus jimmadseni evolved much earlier than the previously known Allosaurus fragilis species.

Frozen bird turns out to be 46,000-year-old horned lark

Scientists have recovered DNA from a well-preserved horned lark found in Siberian permafrost. The results can contribute to explaining the evolution of sub species, as well as how the mammoth steppe transformed into tundra, forest and steppe biomes at the end of the last Ice Age.

In 2018, a well-preserved frozen bird was found in the ground in the Belaya Gora area of north-eastern Siberia. Researchers at the Centre for Palaeogenetics, a new research center at Stockholm University and the Swedish Museum of Natural History, have studied the bird and the results are now published in the scientific journal Communications Biology. The analyses reveal that the bird is a 46 000-year-old female horned lark.

"Not only can we identify the bird as a horned lark. The genetic analysis also suggests that the bird belonged to a population that was a joint ancestor of two sub species of horned lark living today, one in Siberia, and one on the steppe in Mongolia. This helps us understand how the diversity of sub species evolves," says Nicolas Dussex, researcher at the Department of Zoology at Stockholm University.