106 replies to this topic

Renamed this thread slightly, so it's less dinosaur-centric.

Technically, I suppose this article (see below) is not about "prehistoric life" in that it actually is about life depicted in historical accounts. However, since it focuses on one of the very earliest of historic accounts, I will bend the rules a little to place the article in this thread.

Gorgeous Egyptian Art From 4,600 Years Ago Is Now Thought to Reveal an Extinct Goose

(Science Alert) Artwork that had adorned the walls of an Egyptian prince's tomb for more than four millennia has been found to contain images of a bird completely unknown to modern science - until now.

Although archaeologists have been eyeing the representations of local waterfowl since the fresco's discovery at the dig site of Meidum in 1871, it's taken an evolutionary biologist's clever taxonomic sleuthing to see the birds for what they really were.

Last year Anthony Romilio from the University of Queensland in Australia took a closer look at the six birds represented in a famous piece known as the Meidum Geese, a 4,600-year-old painting historians describe as "one of the great masterpieces of the Egyptian animal genre".

In spite of centuries of scrutiny, and the fact it holds a place in history as the oldest recording of birds with enough detail to nail down a species, the precise identity of most of those species has never been agreed upon.

Now it appears it could be because one of them couldn't be found in any ornithology books.

What Did Dinosaurs Look Like? An Unlikely Team Is Debunking Old Beliefs

(Inverse) Robert Nicholls, a Paleoartist from Bristol, England, was in the process of creating the world’s most realistic model dinosaur when he realized it was absolutely adorable.

It was, in fact, perhaps too adorable. The creature had been dead for over 100 million years, killed by some gruesome cause lost to time. Cute wasn’t exactly the vibe he was going for.

Working alongside Jakob Vinther, a paleontologist at the University of Bristol, Nicholls had spent months rebuilding an exact replica of a Psittacosaurus — a plant-eating, beaked dinosaur about the size of a labrador.

Nicholls had constructed the dinosaur “from the inside out,” as he tells Inverse, but there were no signs of impending cuteness until he readied the dinosaur’s cheeks. (He and Vinther knew the dinosaur had cheeks due to pigmented skin in that region on the fossil the model is based on.) As he applied his clay, the dinosaur started to look suspiciously chubby.

“There was debate about whether we should keep it looking cute,” Nicholls says. 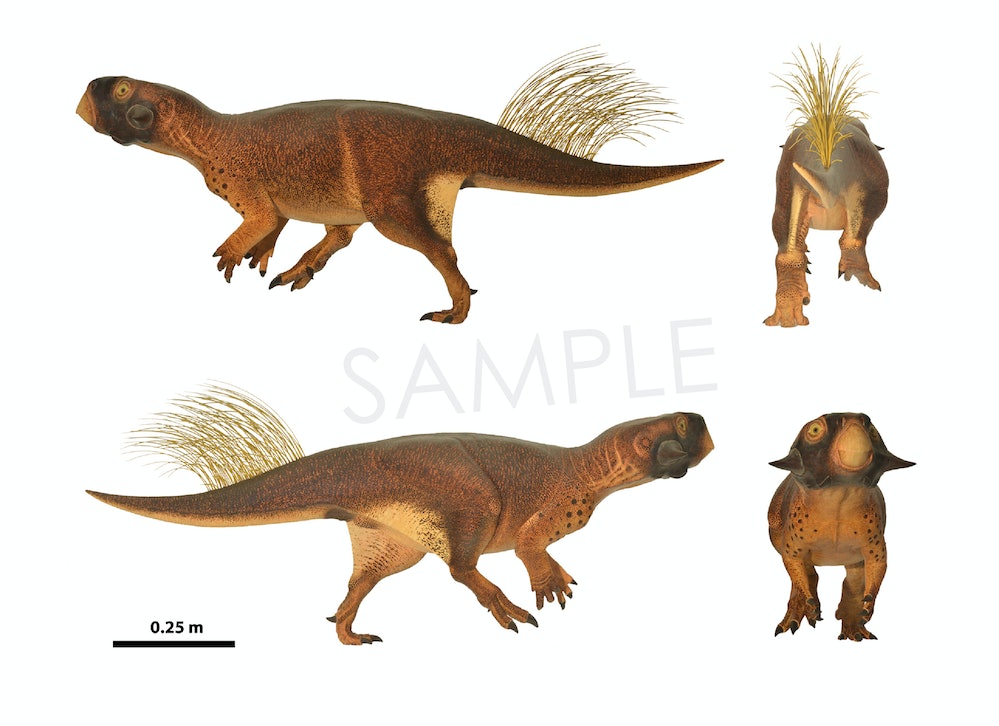 Sample drawings of the Psittacosaurus.

All that remains of the Tyrannosaurus rex today is a handful of fossils, but how many of these iconic dinosaurs roamed the Earth? A new analysis from the University of California Berkeley estimates that there were about 20,000 adult Tyrannosaurs at any given time during the Cretaceous period. Add that up over millions of years, and there could easily have been 2.5 billion of these dinosaurs in total.

Paleontologists have unearthed only 32 adult T. rex fossils, which is not enough to estimate their range or numbers. Fossils tell us about individual animals — how they lived, how they died, and how they were built. So few animals become fossils that you can’t tell how large a population was just from how many bones are in the ground. However, knowing about the animal’s biology can help make an estimate of population, as long as you’re not looking for an exact headcount.

The researchers, led by Berkeley biology professor Charles Marshall, used tools designed for modern animals to analyze the dinosaur. The core premise of the work is that there is a consistent relationship between large and small animals. For example, there are more rats than there are elephants. We can’t say for certain that the relationship was the same in the Cretaceous, but it’s at least plausible.

Reconstruction of Elasmotherium, an extinct species of rhino that lived in the Eurasian area in the Late Pliocene and Pleistocene eras, surviving until about 37,000 BC. 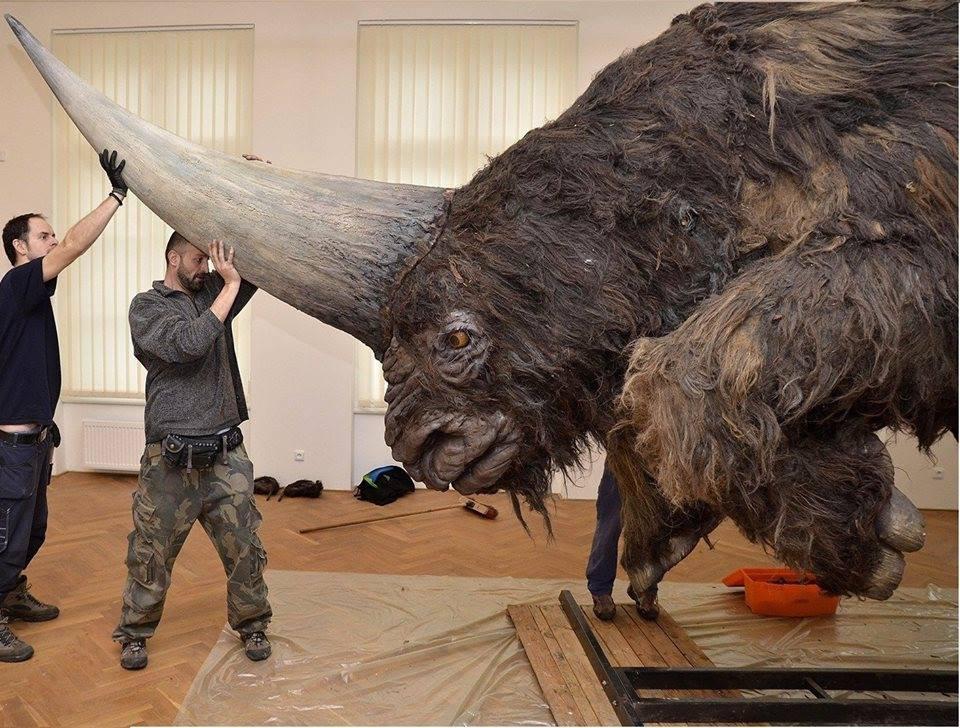 All that remains of the Tyrannosaurus rex today is a handful of fossils, but how many of these iconic dinosaurs roamed the Earth? A new analysis from the University of California Berkeley estimates that there were about 20,000 adult Tyrannosaurs at any given time during the Cretaceous period. Add that up over millions of years, and there could easily have been 2.5 billion of these dinosaurs in total.

What's impressive about this to me, is that the Tyrannosaurus was such an apex predator that the global ecosystem could only support about 20,000 of them at any time.

Shuvuuia: A dinosaur that hunted in the dark

(Phys.org) Today's 10,000 species of birds live in virtually every habitat on Earth, but only a handful have adaptations enabling them to hunt active prey in the dark of night. Scientists have long wondered whether theropod dinosaurs—the group that gave rise to modern birds—had similar sensory adaptations.

A new study led by University of the Witwatersrand scientist, Professor Jonah Choiniere, sought to investigate how vision and hearing abilities of dinosaurs and birds compared. The international team of researchers used CT scanning and detailed measurements to collect information on the relative size of the eyes and inner ears of nearly 100 living bird and extinct dinosaur species.

To measure hearing, the team measured the length of the lagena, the organ that processes incoming sound information (called the cochlea in mammals). The barn owl, which can hunt in complete darkness using hearing alone, has the proportionally longest lagena of any bird.

To assess vision, the team looked at the scleral ring, a series of bones surrounding the pupil, of each species. Like a camera lens, the larger the pupil can open, the more light can get in, enabling better vision at night. By measuring the diameter of the ring, the scientists could tell how much light the eye can gather.

The team found that many carnivorous theropods such as Tyrannosaurus and Dromaeosaurus had vision optimized for the daytime, and better-than-average hearing presumably to help them hunt. However, a diminutive theropod named Shuvuuia, part of a group known as alvarezsaurs, had both extraordinary hearing and night vision. The extremely large lagena of this species is almost identical in relative size to today's barn owl, suggesting that Shuvuuia could have hunted in complete darkness. 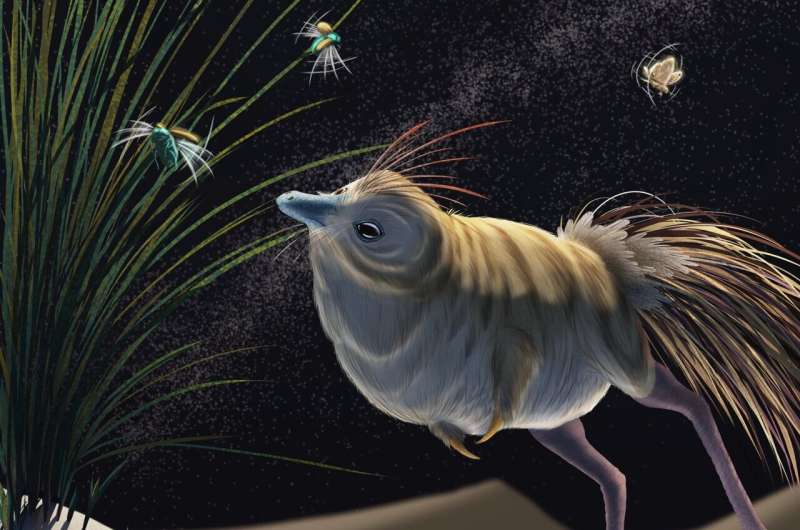