I found some interesting articles that detail the mood of the media in the lead-up to the 2003 Iraq War.

Comparing Saddam Hussein to Adolf Hitler, British Prime Minister Tony Blair says he would be pushing for Iraq's disarmament "irrespective of the position of America."

"If the Americans were not doing this, I would be pressuring them to do so," Blair told The Guardian newspaper in Britain just days after 121 Labour backbenchers rebelled against his stance in a parliamentary vote.

"It's worse than you think. I believe in it. I am truly committed to dealing with this, irrespective of the position of America," he said.

Many have accused Blair of behaving like U.S. President George W. Bush's lapdog.

It's almost sickening in retrospect when you know that we went in based on lies and sheer quasi-fascist neocon propaganda that exploited our post-9/11 hysteria.

Iraq: the case for decisive action

Military intervention in the Middle East holds many dangers. But if we want a lasting peace it may be the only option.
A war with Iraq has become more likely in the past week. Thursday's discovery of undeclared poison gas shells was insufficient to trigger war alone. But here was the first concrete, and predictable, confirmation that Iraq's co-operation with Hans Blix's UN weapons inspectors has been less than complete. And Saddam Hussein's defiant speech on Friday even disappointed those who still hope that the Iraqi leader might choose comfortable exile in Libya or Belarus.
One thing which has been stressed too little in recent weeks is that it is Iraq's choices that have brought war closer. The debate in Britain and Europe continues to focus largely on what America is doing and why. Too often, it is overlooked that it is Iraq which remains, at the eleventh hour, in defiance of the will of its region and the wider world. That will is still to find a sensible resolution to the current crisis without war. The coercive diplomacy that could yet lead to Saddam's disarmament or his disposal by his own side must be pursued. Indeed, the military build-up remains the best strategy for seeking to disarm him, short of war. Yet he still shows signs of frustrating the demands of December's UN resolution. If this continues, few analysts doubt that the United States will seek support for a military attack. It is becoming equally clear that Tony Blair's Britain would participate. Would we be right to do so?

It's been 15 years. So much peace in the Middle East in that time, eh?

What would war with Iraq cost?

The United States President, George Bush, has reminded Europeans of the heavy price they have paid for appeasing dictators and challenged NATO members to join him in confronting Saddam Hussein and fighting terrorism beyond Europe.

In a speech to students on the eve of a two-day NATO summit, Mr Bush compared the challenge of the Iraqi President to the Nazi invasion of Czechoslovakia in 1938, which led to World War II.

He demanded that Saddam "declare completely and truthfully his arsenal of terror" and threatened serious consequences if he failed to meet the December 8 deadline to disclose his weapons of mass destruction.

"Deception this time will not be tolerated; delay and defiance will invite the severest of consequences," Mr Bush told the students ahead of the summit, which began yesterday.

One of the most understated and terrifying consquences of Hitler's regime is that future despots just as evil as his will commit atrocities by comparing their enemies to him.

German chancellor Gerhard Schröder and his Social Democratic party yesterday broke ranks with America's other European allies by declaring at the start of their election campaign that Germany would refuse to provide troops or money for an invasion of Iraq.
The SPD's top official indicated that Germany under a centre-left administration was ready to stay out, even if the UN gave its blessing to a war.
Germany's rebuff to Washington came as Iraq further tried to split western opinion by inviting the US Congress to send a mission to Baghdad, offering free access to any site alleged to be developing weapons of mass destruction. The White House dismissed the invitation.

Selling The Iraq War To The U.S.

Politicians have had to sell the public on going to war since Colonial times, but they never had the arsenal of advertising and communications techniques the Bush administration is using to sell a possible war on Iraq. Bob Simon reports on those techniques and those employed by the elder Bush prior to the 1991 Gulf War.
Simon reminds viewers that a horrible story spread widely by the first Bush administration prior to the Gulf War about Kuwaiti babies pulled from incubators by invading Iraqis turned out not to be true. The current Bush administration may be also misinforming the public in its efforts to justify a possible second war with Saddam Hussein.
One example of misinformation, according to physicist and former weapons inspector David Albright, was the Bush administration's leak to the media in September about Iraq's attempt to import aluminum tubes which administration officials claimed were headed for Iraq's nuclear program.

Rupert Murdoch has given his full backing to war, praising George Bush as acting "morally" and "correctly" and describing Tony Blair as "full of guts" for going out on a limb in his support for an attack on Iraq.
The media tycoon, who has developed a close relationship with the prime minister, said he was full-square behind Mr Bush and Mr Blair, who are now facing critical opposition from Germany and France over war.
Mr Murdoch described the prime minister's stance as "extraordinarily courageous" but branded the Labour party as a hotbed of "knee-jerk anti-Americanism".

Murdoch was for it. That flag was so red, even the Soviets would have thought it was too much.

The U.S. launched its long-anticipated war to depose Saddam Hussein, opening what the Bush administration hopes will be a quick and massive drive that changes Iraq and remakes the Middle East.

The war began with little warning Wednesday night when U.S. missiles struck what officials called limited "targets of opportunity" in Baghdad -- a strike launched after American officials discovered an opportunity to hit some Iraqi leaders. In a four-minute speech to the nation, President Bush described the attacks as the beginning of a major effort to disarm Iraq of weapons of mass destruction and to liberate the Iraqi people.

"On my order, coalition forces have begun striking selected targets of military importance to undermine Saddam Hussein's ability to wage war," the president said. "These are the opening stages of what will be a broad and concerted campaign." 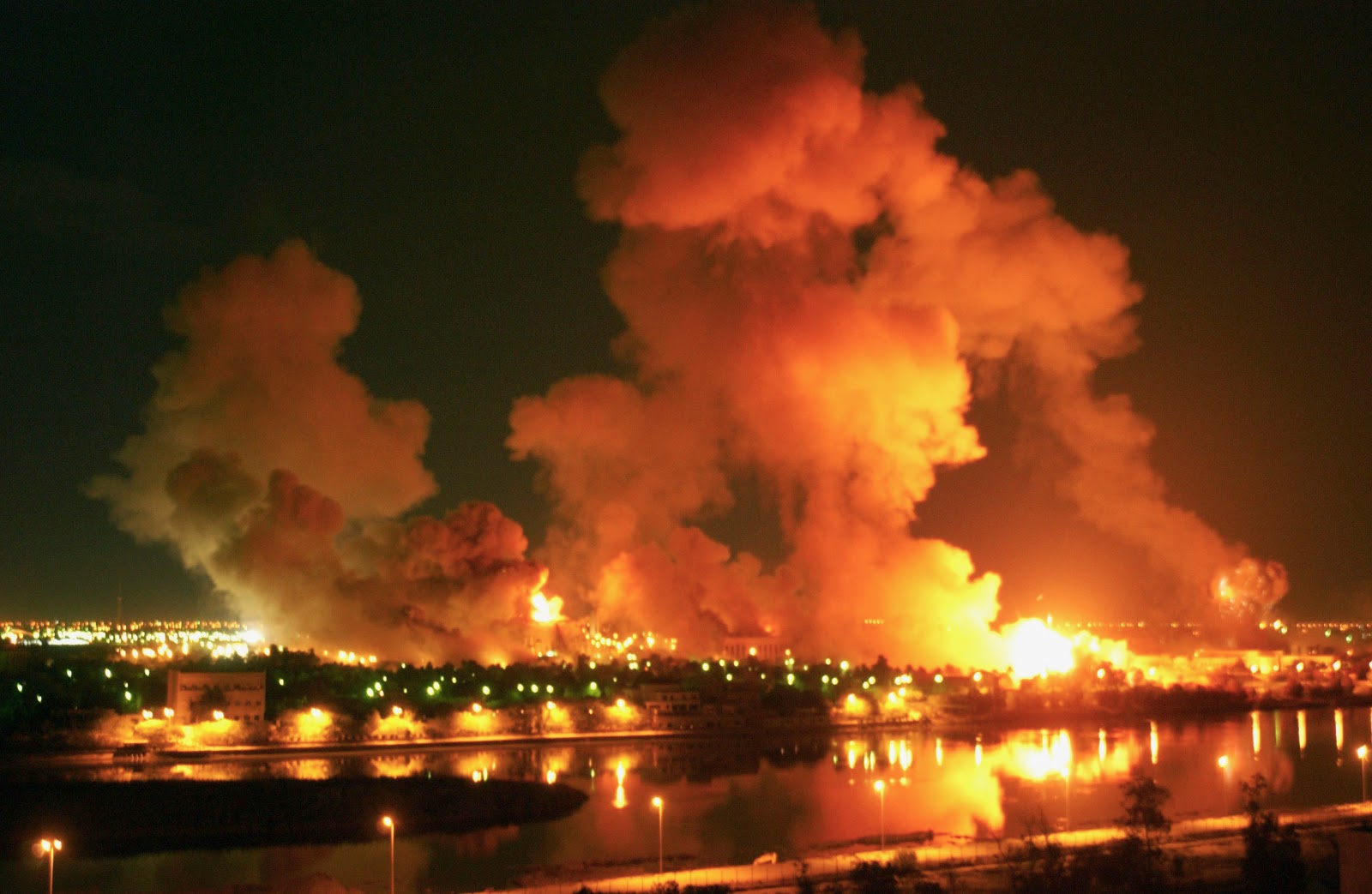 And so we fired the first shots of a 15-year-long quagmire. It's only this past year that Iraq's been able to drive out ISIS and regain some semblance of normalcy.

What's also hilarious is how competent we seemed after the First Iraq War, the one from 1991 with the other George Bush. We had concrete goals that weren't nebulous or based on lies (for the most part). Saddam Hussein was actually in the wrong. He invaded a sovereign country and the entire planet condemned him for this, even the Soviet Union. Both we, the US, as well as the USSR were allies of Iraq before then. The iffy part was why we went in to stop them rather than funding a homegrown militia, but it was probably for the best considering how our other adventures in arming Middle Eastern insurgents have gone. Just like how we actually dropped the atom bombs on Japan to send a message to the Soviets in 1945, I believe we really blitzkrieged into Iraq to tell the Russians "check out how unstoppable we are compared to your commie asses. We can conquer a world-class military in a month."  And then we actually backed it up and the Soviets were mortified to see how stupendously far ahead the USA was over them despite bankrupting themselves trying to achieve military parity.

Total casualties of the Gulf War were relatively low as far as wars go, especially on our side. In terms of major wars over the past 150 years, I think the Gulf War has the distinction of having the fewest American casualties by some distance.

But more importantly, we didn't uninstall Saddam Hussein. We got in, did our fucking job, and got the hell out. Hussein was weakened, embarrassed, and put in his place. There was no chance of Iraq catching up to Iran anytime soon either, so while Middle Eastern geopolitics had been radically shifted, it wasn't so radical as to plunge the entire region into perpetual war.

Alas. Nearly $6 trillion gone, well over a million dead, geopolitics fatally altered for the worse, and a generation of cynical asshats later, we can honestly look back and say "Imagine the reason Jeb! would have invaded Iraq over."