52 replies to this topic

Italy's newly-approved budget includes the introduction of an entrance tax for tourists who visit Venice.

It's estimated that the new system will be worth around 50 million euros a year, up from the present 30 million a year.

CASTELBUONO, Sicily (Courthouse News)  – An unusual high-stakes legal and political battle is unfolding in Italy over the nation’s harsh new anti-immigrant policies and whether its most prominent advocate, the far-right Interior Minister Matteo Salvini, should face criminal charges for carrying those policies out.

In late January, a three-judge panel in Catania, a Sicilian port city, issued a ruling saying Salvini should be prosecuted for his decision to detain for several days 177 asylum-seekers rescued from the Mediterranean Sea.

The asylum-seekers, who were mostly from Eritrea, were held aboard an Italian coast guard ship, the Diciotti, while it was docked in Catania. In the meantime, Salvini demanded other European nations take in the asylum-seekers.

The judges said Salvini’s decision to hold them on the vessel, sleeping on the ship’s decks under the hot summer sun, was “merely political” and served no public interest.

In this picture taken Dec. 22, 2018, Italian Interior Minister Matteo Salvini waits for the start of a confidence vote on the budget law at the Italian Senate in Rome.

Reveals major divisions in the EU and the inability for Brussels to form a unified strategy regarding Chinese ambitions:

(Reuters) - Italy plans to sign a memorandum of understanding to become a part of China’s Belt and Road Initiative (BRI) by the end of March, a move which has drawn critical reaction from the United States, the Financial Times reported on Tuesday.

“The negotiation is not over yet, but it is possible that it will be concluded in time for (Chinese President Xi Jinping’s) visit,” the newspaper reported quoting Michele Geraci, the undersecretary in the Italian economic development ministry.
The United States said the project was unlikely to help Italy economically and could significantly damage the country’s international image, the paper reported.

Italy's economy is struggling, and with its ongoing disputes with Brussels, sees China as a possible way out. 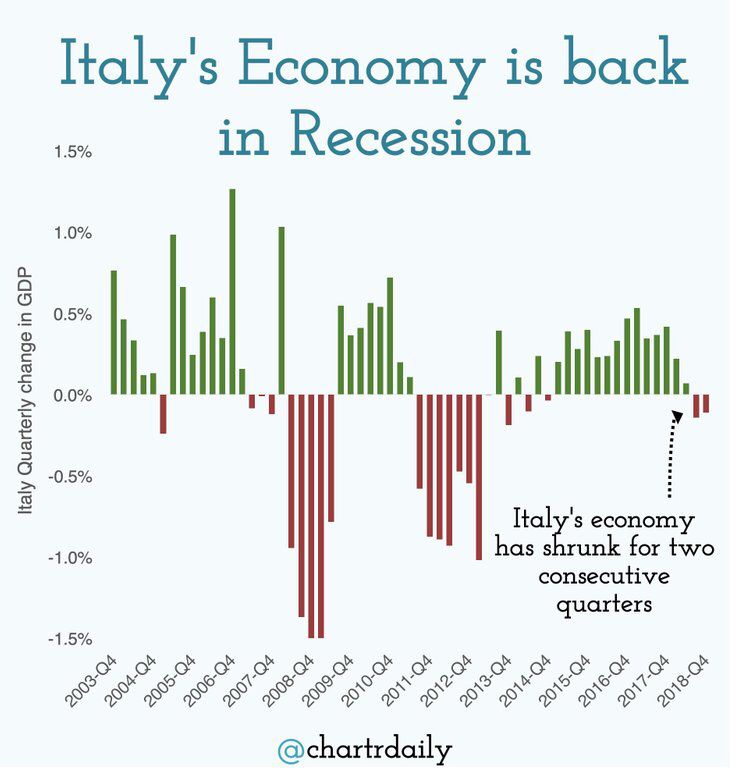 Magistrates opened a murder investigation after the death this month of Iman Fadil, 34, who was due to give evidence at the former Italian prime minister’s bribery trial.

Ms Fadil was scheduled to give evidence about claims that Mr Berlusconi offered to buy silence from women who attended parties at his villa near Milan [...]

BREAKING: Immigrant man hijacked school bus carrying 51 children, locked them inside and set the bus on fire in possible terrorist incident in Milano, Italy. Police quickly rescued all children on board.

Pure evil is all I will say about this. They hell?

Bus driver arrested in Milan after allegedly shouting: ‘Nobody gets off here alive’

Police raids in Italy have unearthed a huge Far Right cache of weaponry, including an ground-to-air missile. (via
@itvnews)


Italy’s prime minister just resigned. What the heck comes next?

(Vox) Italy has been slow-walking into a political crisis for weeks. Now it’s here.

In a speech before the Italian Senate, Conte blamed his deputy prime minister, Matteo Salvini, for the mess, accusing him of being irresponsible and putting “his own interests and those of his party” ahead of Italy’s, at the risk of political and financial instability.

Conte is not totally wrong: Salvini has largely orchestrated this political drama.

Salvini, who leads the far-right, anti-immigrant Lega party, has been angling for weeks for snap elections, in the hopes that his rising popularity and success in May’s European Parliament elections would give him enough support that he could become prime minister outright after a new vote, or maybe with the support of smaller right-wing and far-right parties. Either way, the guy wants to become prime minister.

Hmm, what at the Italian right's views on the EU?

Is Italeave on the table? Or will they just complain a lot like some of the other far right EU govts?

Why it matters: Matteo Salvini, the leader of the far-right League party and perhaps the most popular politician in Italy, withdrew his support on Aug. 8 from the unlikely coalition he had formed with Five Star after the 2018 election. Salvini hoped fresh elections might allow him to become prime minister. Instead, his gamble has expelled his party out of power. Conte has agreed to stay on as prime minister of the new coalition, per BBC.

Italy's new government was sworn in on Thursday after the pro-European Democratic Party (PD) joined the anti-establishment Five Star Movement (M5S) in an unlikely alliance that has forced the far-right out of power.

Giuseppe Conte, the independent prime minister, led his new team of seven women and 14 men in a swearing-in ceremony in the presidential palace.

Mr Conte’s first, 14-month-long coalition, collapsed after his right-wing League partner, led by Matteo Salvini, pulled out in the hope of triggering early elections he was certain his party would win.

However, Mr Salvini failed to foresee that M5S and the PD would put aside their differences and form an unlikely alliance.

‘We will send police. With flame-throwers’: Italian mayors lose it at people refusing to self isolate

As the number of coronavirus cases continues to rise, several Italian mayors have voiced their distress with those ignoring quarantine protocols.

Mayoral figures of different Italian cities took to social media and local television to make statements regarding growing fear around COVID-19 in Italy. Despite the overwhelming amount of infected cases, some have disregarded the necessary precautions pushed by their government.

“I’m getting news that some [people] would like to throw graduation parties,” said Vincenzo De Luca, the president of Campania, said in a Facebook live statement. “We will send police. With flame-throwers.”

The plead to abide by government precautions follow the country’s decision to enter a nation-wide lockdown, which shut down non-essential businesses and barred any travel within the country.