A Ukrainian-born California businessman who has been indicted in New York on charges of violating campaign finance law was arrested in San Francisco Thursday and appeared briefly in federal court in the city.

Andrey Kukushkin, 46, is one of four people named in a grand jury indictment announced Thursday by U.S. Attorney Geoffrey Berman of the Southern District of New York.

The others, all Florida residents, include two associates of presidential lawyer Rudy Giuliani, Ukrainian-born Lev Parnas, 47, and Belarus-born Igor Fruman, 54, and a fourth defendant, David Correia, who was born in the United States. The four men are all U.S. citizens.

CIA veteran insists (and pundits will surely agree): not only is the Ukraine whistleblower legitimate, but those who blew the whistle on intelligence services are criminals.

Suggesting, "yeah, right." The tweet, and others, fits nicely with his recent Rolling Stone article questioning whether the whistleblowers were genuine. Amusingly, he, Mate, Greenwald, and others spent a lot of energy criticizing Democrats for being conspiracy theorists about Russia during the Russia investigation.

Marcy Wheeler has taken Taibbi to task lately over some things he wrote:

THat's how fucking stupid this is.

Taibbi had Chris Hedges on his show the other day. Haven't listened yet; but here is a tweet about it:

Hedges fearmongers about Trump cult member becoming violent if impeachment were to happen. He implies that's a good reason not to impeach. From the guy who said, "I do not fight fascists b/c I will win. I fight fascists b/c they're fascists." Pathetic.

Donald Trump’s secretary of defense said on Sunday the Pentagon would cooperate with the House’s impeachment inquiry, while cautioning that Trump may try to restrict his disclosure of information.
Mark Esper said in two interviews his department would work to comply with a subpoena from committees seeking records relating to the withholding of US military aid to Ukraine.

“We will do everything we can to cooperate with the Congress,” Esper said on CBS’s Face The Nation.

“We will do everything we can to respond to their inquiry,” he said on Fox News Sunday.

But Esper warned on Fox News Sunday that Trump and other officials may yet create complications for the compliance before Tuesday’s deadline for him to respond.

17 former Watergate special prosecutors: "We investigated the Watergate scandal. We believe Trump should be impeached."

Trump and Lev Parnas stand shoulder to shoulder, smiling at the camera

A photograph of President Donald Trump posing with a recently indicted associate of Rudy Giuliani was posted online in April 2014, two years prior to what had been their first known interaction. 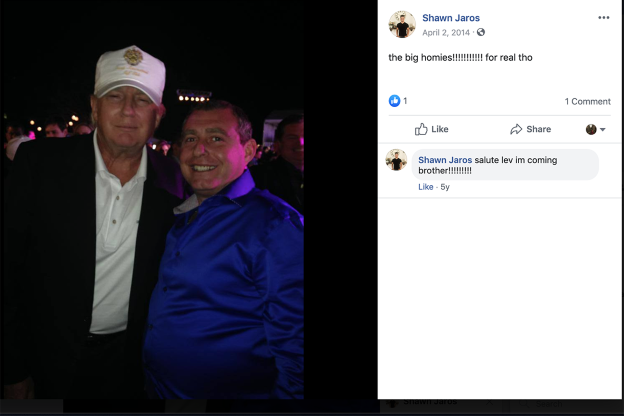 NEW: Fiona Hill told House impeachment investigators that John Bolton ordered her to notify a WH lawyer that Giuliani was working with Mick Mulvaney on a rogue operation with legal implications

(Also was key behind Section 702 stuff just ruled a 4A violation.)

Hill said Bolton instructed her to talk to NSC lawyer John Eisenberg. A spox for Bolton didn’t immediately respond to request for comment


Hill also said Bolton made the following statements to her

Giuliani was paid $500,000 to consult on indicted associate's firm

The businessman, Lev Parnas, is a close associate of Giuliani and was involved in his effort to investigate Trump’s political rival, former Vice President Joe Biden, who is a leading contender for the 2020 Democratic Party nomination.

Federal prosecutors are “examining Giuliani’s interactions” with Parnas and another Giuliani associate, Igor Fruman, who was also indicted on campaign finance charges, a law enforcement source told Reuters on Sunday.

The New York Times reported last week that Parnas had told associates he paid Giuliani hundreds of thousands of dollars for what Giuliani said was business and legal advice. Giuliani said for the first time on Monday that the total amount was $500,000.

Giuliani told Reuters the money came in two payments made within weeks of each other. He said he could not recall the dates of the payments. He said most of the work he did for Fraud Guarantee was completed in 2018 but that he had been doing follow-up for over a year.

NEW @ABC - Giuliani Rebuffing Congressional Subpoena - Rudy tells me his lawyer (who is no longer representing him) has sent a letter to Congress informing them he is not complying. “If they enforce it then we will see what happens." 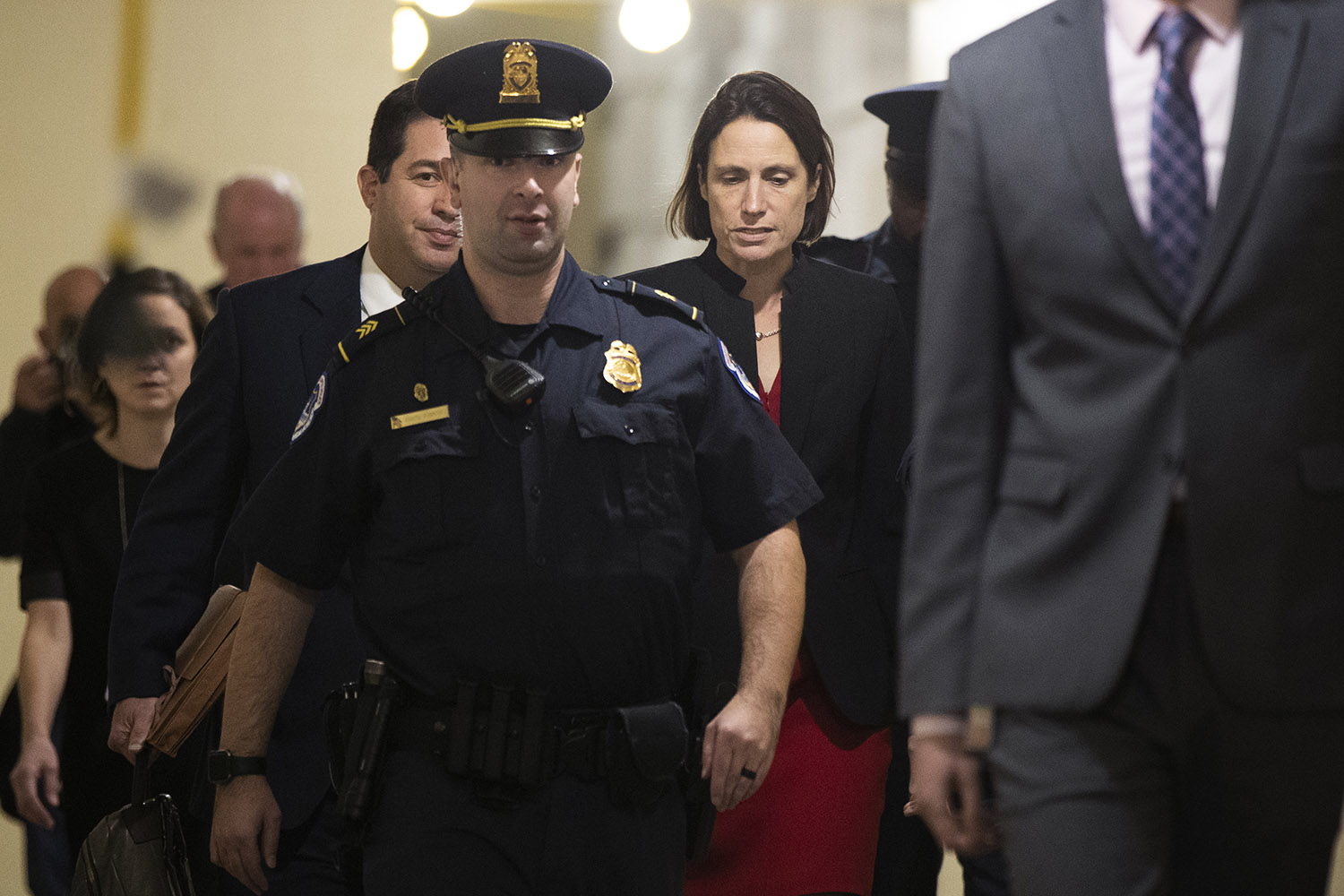 The president's former top Russia adviser, Fiona Hill — the first White House official to cooperate in Democrats' investigation of the Ukraine scandal — has detailed for lawmakers a trail of alleged corruption that extends from Kiev to the West Wing. In dramatic testimony on Monday, she roped in some of Trump's top advisers as witnesses to the unfolding controversy.

And on Tuesday, a senior State Department official, George Kent, appeared on Capitol Hill to testify about his knowledge of the episode despite an attempt by Trump administration lawyers to block him, according to a source working on the impeachment inquiry. The House Intelligence Committee issued a subpoena for his testimony Tuesday morning, and Kent, the Deputy Assistant Secretary of State for European and Eurasian Affairs, complied. - Politico

Jamie Raskin's prediction looks to becoming true, after the committees get done beating the WH over the head with criminal conduct, republicans are going to be begging for democrats to impeach tRump. UNCLE!

George Kent raised concerns to colleagues as far back
as March about the pressure being directed at Ukraine
by Trump and Rudy Giuliani to pursue investigations
into Trump's political rivals, people familiar with Kent's
warnings tell NYT.

So apparently this video was shown at a conference for Trump supporters. 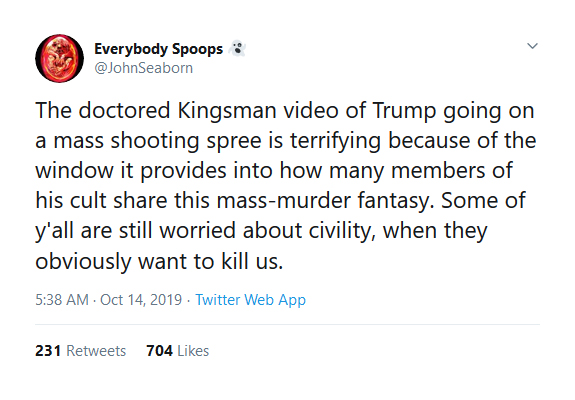 That was hilarious. If it was a real mass shooting, sure, but it's an overly violent comedic film. It just means that Trump supporters have some sort of humour that doesn't involve sticks stuck in holes. We have so much better stuff to call out and focus on than editing in Trump's head over a film sequence, shooting MSM companies. And the use of the word "doctored", jesus.

/\ Thankyou for the lighthearted response. I was thinking along the same lines but didn't post because I couldn't write in a way that didn't read in a confrontational way for whatever reason tonight.

The president’s businesses made themselves appear more profitable to lenders and less profitable to tax officials. One expert calls the differing numbers “versions of fraud.”

The president’s businesses made themselves appear more profitable to lenders and less profitable to tax officials. One expert calls the differing numbers “versions of fraud.”

I had a déjà vu, like I remember reading about this one or two years ago.

Another man is arrested in probe of Giuliani associates

NEW YORK — A Florida man wanted in a campaign finance case involving associates of Rudy Giuliani is in federal custody after flying Wednesday to Kennedy Airport in New York City to turn himself in, federal authorities said.

David Correia, 44, was named in an indictment with two Giuliani associates and another man arrested last week on charges they made illegal contributions to politicians and a political action committee supporting President Donald Trump. Giuliani, a former New York City mayor, is Trump's personal lawyer.

All the other defendants in the case were already in custody.

Prosecutors said Correia, who owns a home with his wife in West Palm Beach, was part of efforts by co-defendants Lev Parnas and Igor Fruman to leverage outsized political donations to Republican candidates and committees as part of an effort to advance their business interests.

WASHINGTON — A former top White House foreign policy adviser told House impeachment investigators this week that she viewed Gordon D. Sondland, the United States ambassador to the European Union, as a potential national security risk because he was so unprepared for his job, according to two people familiar with her private testimony.

The adviser, Fiona Hill, did not accuse Mr. Sondland of acting maliciously or intentionally putting the country at risk. But she described Mr. Sondland, a hotelier and Trump donor-turned-ambassador, as metaphorically driving in an unfamiliar place with no guardrails and no GPS, according to the people, who were not authorized to publicly discuss a deposition that took place behind closed doors.

Ms. Hill, the former senior director for European and Russian affairs at the White House, also said that she raised her concerns with intelligence officials inside the White House, one of the people said.

NBC News: Just now, @senatemajldr confirms he WILL hold a trial in the senate

Just now, @senatemajldr confirms he WILL hold a trial in the senate if House sends over impeachment articles. Says senate will sit for 6 days/week, senators aren’t allowed to speak (“good therapy” for some, he jokes). Senate will follow its constitutional duties.

CNBC: Mulvaney Admits to Money For Ukraine Being Held Up !!!

“The money held up had absolutely nothing to do with Biden,” Mulvaney said.

Instead, he said, the withholding of aid came in connection with “an ongoing investigation into the 2016 election,” and the possibility that a Democratic National Committee server that investigators have said was hacked by Russian agents ended up in Ukraine.