(Mother Jones) A federal judge blocked a series of actions implemented by Postmaster General Louis DeJoy that have led to widespread mail delays, calling them “an intentional effort on the part of the current Administration to disrupt and challenge the legitimacy of upcoming local, state, and federal elections.”

In a strongly worded opinion released Thursday, District Court Judge Stanley A. Bastian of Washington state issued a nationwide injunction prohibiting DeJoy from implementing changes ranging from cutting overtime to removing 671 mail sorting machines to forcing mail trucks to leave on time even if the mail is not ready .

Republican Sen. Susan Collins of Maine has well below 50% support in a pair of new polls released this week, showing just how precarious her reelection bid is weeks before voters decide her political fate in the toughest campaign of her career.

Collins' Democratic challenger, Maine state House Speaker Sara Gideon, currently holds 49% to the senator's 44%, according to a new poll released Friday from The New York Times and Siena College, results that are within the poll's sampling error margin.

The survey's finding is far tighter than a Quinnipiac University poll released earlier this week showing Gideon with a wide, 54% to 42% advantage over Collins.

The polls underscore how high the stakes are for Collins with just under 50 days until the election. Her race is regarded as one of the most competitive Senate races this cycle. The senator's expensive competition against Gideon could prove to be a make-or-break moment for her four-term career in the chamber. 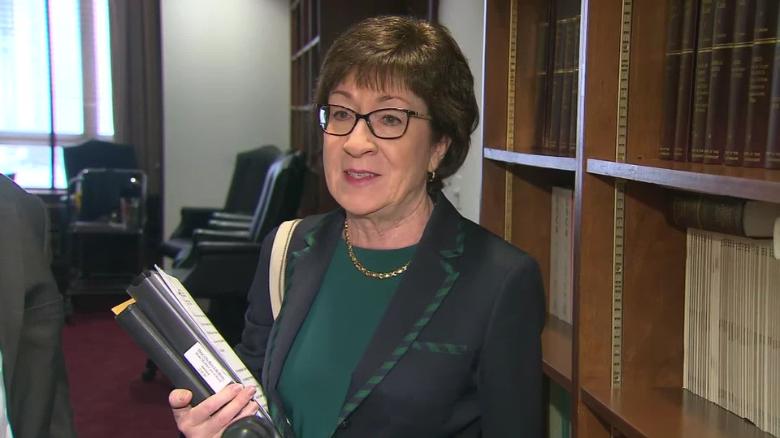 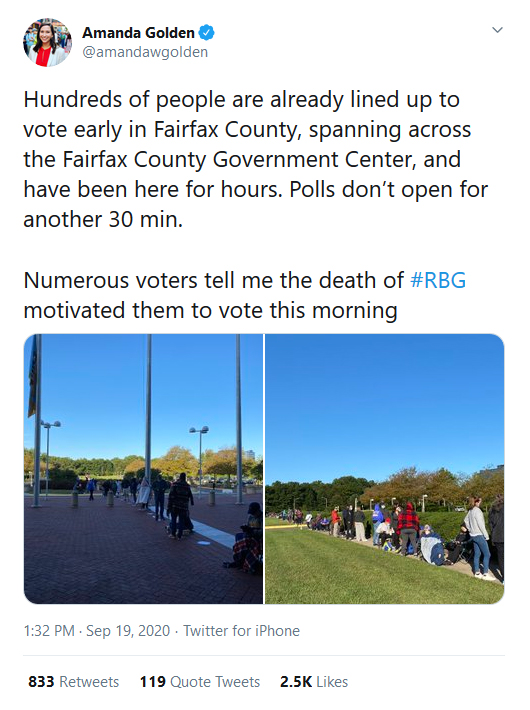 Biden continues to demonstrate real strength with suburban voters, independent voters, women, seniors, White college-educated voters and voters of color and even has a decent foothold with White non-college-educated voters. That demographic portfolio is what is helping the Biden team move both Wisconsin and Arizona -- two of the most critical states on the board -- from that true battleground category to now leaning Democratic. After seeing the battle for the single electoral vote in Nebraska's 2nd Congressional District (Omaha area) become much more engaged over the last month, it has become clear that that contest is no longer a Republican leaner but a straight up battleground
...The one move that we are making in the President's direction is the commonwealth of Pennsylvania, as we move its 20 electoral votes from leaning Democratic to a straight-up battleground. Of the three so-called blue wall states that Trump busted through four years ago, Pennsylvania may be the best proving ground for Team Trump to pursue its theory of the case that it can produce an outsized turnout of primarily non-college-educated White male voters to deliver yet another victory in a state that had been Democratic for more than a generation in presidential campaigns prior to 2016.
However, Pennsylvania may end up being the most temporary of all of these moves. The polling there clearly shows a slight edge for Biden, and the demographics of the state play to some of his unique strengths this election season. Last week's court rulings preventing the Green Party candidate from appearing on the ballot and extending the window for when absentee ballots can be received after Election Day in order to still be counted were also welcome developments to the Democrats in this state. Yet, both the Trump and Biden campaigns currently believe Pennsylvania is going to be a hotly contested state all the way through to Election Day so we have moved it to our battleground category for now.

September 18-20, in the field post-RBG death

Changes from their last poll (Sept 4-6)

MULawPoll
@MULawPoll
Among likely voters in the nationwide sample, 50% say they will vote for Joe Biden, 40% for Donald Trump, 3% for Libertarian Jo Jorgensen, and 2% for Green Party candidate Howie Hawkins. #mulawpoll
10:24 AM · Sep 23, 2020

President Donald Trump on Wednesday would not commit to providing a peaceful transition of power after Election Day, lending further fuel to concerns he may not relinquish his office should he lose in November.

"Well, we're going to have to see what happens," Trump said when asked whether he'd commit to a peaceful transition, one of the cornerstones of American democracy.

"You know that I've been complaining very strongly about the ballots and the ballots are a disaster," Trump said at a press briefing at the White House, presumably referring to mail-in ballots, which he has baselessly claimed will lead to voter fraud.

"(G)et rid of the ballots and you'll have a very ... there won't be a transfer, frankly. There'll be a continuation," he added, saying "the ballots are out of control."

A question to the Americans: What's the worst possible outcome if Trump refuses to cede power? A civil war?

A question to the Americans: What's the worst possible outcome if Trump refuses to cede power? A civil war?

I'm not sure if the military will splinter into separate factions to be classified as a Civil War, even though domestically there would be mass riots and ideologically armed groups fighting in the streets. If the Supreme Court falls under the control of the GOP fully, rules in his favor, then the military or Pentagon leaders may not be inclined to remove Trump even if they do believe he is illegitimate. It'll be a choice between adhering to rule of law, or securing order at all cost in the absence of law.

I also wonder if secession may become a more discussed option.  I was just re-reading California: The Great Exception by Cary McWilliams. He makes the point that shortly after California became a state and during the Civil War era, there was talk of California seceding from the union and essentially taking other west coast territories with it.  The basis was not the issue of slavery, but of geographic isolation. Rumors of this secessionist impulse prompted Congress to pass and Lincoln to sign a bill which launched the first transcontinental railroad. This addressed the isolation issue and helped cement the west coast to the rest of the nation.

Cyber rebel is right that there is a definite geographic balkanization impulse at work in today's situation. As I have argued before, part of the problem started with the Supreme Court's acting to undermine key provisions of the 1965 Civil Rights Act.  Other Supreme Court actions undermining the McCain Feingold campaign finance reform act did not help. So now we have the kleptocrats versus small "d" democrats who are also  lining up on a pronounced regional basis.  Whether that would actually lead to a secession effort remains to be seen.  It may seem implausible at the moment, but there is another historical precedent to the present situation.  That  involved the election of 1876 between Rutherford B. Hayes and Samuel Tilden.  Civil War was avoided in that case through southerners agreeing to accept a Hayes victory in exchange for the removal of union troops from the South, thus ending the era of reconstruction. That suggests that some bargaining might occur in order to resolve the dispute, preserve the union, etc.

Factoring into that bargaining equation will be the extent to which folks take to the streets to protest what looks like will be the "official" outcome. I think to truly force the issue something like a nationwide strike would be needed. I don't think that will occur. Instead, one side or the other will eventually back down.  Part of the equation will also be results in the House and Senate.  Perhaps Trump will be awarded the presidency even as the House stays in Democratic hands and the Senate shifts to the Democrats.  A period of deadlocked government would follow, with the Supreme Court arbitrating issues regarding spending and administration.  The great tragedy will be this pre-occupation with dealing with Trump's threat to democracy will distract from a sensible approach to dealing with Covid 19, global warming, and other problems of the day.  The United States will decline in its global influence, albeit with a tremendously powerful military still intact. Oh well.


3 user(s) are reading this topic