NEW: Wall Street donors are privately warning: We'll sit out, or back Trump, if you nominate Elizabeth Warren. “You’re a Democrat and you’re thinking, ‘I want to help the party, but she’s going to hurt me, so I’m going to help Trump,’” an executive said.

They're fine with Bernie Sanders, apparently. I guess they think that Bernie is good at verbal arguments and such, but doesn't have Warren's depth of underdtanding about the financial services and trading industries. She really knows how to shut them down, and where to look for shit they are trying to hide. She's been an deep thorn in the side of Wall Street for decades.

I've noticed people on the Left (far-Left) ratcheting-up the anti-Warren language.  They see Warren as a lot better than Hillary, but still too "corporate" and "neoliberal".  E.g. Matt Taibbi said the other day during a "Useful Idiots" podcast that Warren was much more pro-business and capitalist compared to Bernie.  His preferred candidate is Bernie.  If Bernie doesn't get better, then the far-Left part of the progressive movement may be faced with a choice of voting for Warren or not voting at all.  I would guess maybe 10% to 20% will choose the latter, based on ideological and purity considerations.

I've noticed people on the Left (far-Left) ratcheting-up the anti-Warren language.  They see Warren as a lot better than Hillary, but still too "corporate" and "neoliberal".  E.g. Matt Taibbi said the other day during a "Useful Idiots" podcast that Warren was much more pro-business and capitalist compared to Bernie.  His preferred candidate is Bernie.  If Bernie doesn't get better, then the far-Left part of the progressive movement may be faced with a choice of voting for Warren or not voting at all.  I would guess maybe 10% to 20% will choose the latter, based on ideological and purity considerations.

You have to remember that "far-Left" in the U.S. (without the authoritarian streak) equals "center-Right" in, e.g., Europe. Warren would be further right, still.

Generally, the consensus is that Warren seems to have good political instincts, but some horrible advisors - making her kind of flip-floppity and calculating, also with giant blind spots on foreign policy. Here are some reasons I have heard for why leftists prefer Sanders over Warren:

* Warren voted for Ben Carson to be the head of Housing and Urban Development, then flipped in the next round of voting after a massive backlash from supporters.

* Warren has raised a lot of money from the military-industrial complex and engaged in pork barrel politics with Raytheon back in her home state (MA).

* Warren waffled on Sanders' 'Medicare for All' bill, which she co-signed, citing "lots of paths to get there" - i.e., Medicare for All/Extra/America/public option. Therefore, considerably less likely to pursue single-payer, but rather, "increased access".

* Warren has said she will not take big money in the primaries; but will do so in the General. But the dynamics of bought influence don't magically change in the General. What's worse, Warren wasn't even being truthful about the first point, having transferred over $10MM of the big money she raised in the 2018 Senate race to underwrite her 2020 bid.

* Warren endorsed Hillary over Bernie in 2016, even though Sanders is much closer to her ideologically. Again, this is telling of a much deeper level of calculation going on. It is possible she was vying for a VP spot (a great Machiavellian 3D chess move by Hillary, btw!).

* Warren embraces the language of bipartisanship, as opposed to class warfare. Made a 'spirited defense' of Blue Dog Joe Manchin in a TYT interview. Bernie, on the other hand, has gone on record saying he would use FDR-like tactics to fight for Medicare for All, including primarying other Democrats.

* Warren is a standard neoliberal on foreign policy: Implied Iran broke deal she voted to unilaterally violate terms of, will not condition aid to Israel, will not ease sanctions on Venezuela. etc. etc.

Thanks for all the well wishes. I'm feeling good. I'm fortunate to have good health care and great doctors and nurses helping me to recover.

None of us know when a medical emergency might affect us. And no one should fear going bankrupt if it occurs. Medicare for All!

Kamala Harris asks crowd if America is ready for her presidency.

I guess America was not ready for her radical milquetoast centrism...

Reminds me of the Jeb "please clap" moment.

The senator was taken to hospital on Tuesday after complaining of chest pain at a campaign event in Nevada.

Doctors operated on Mr Sanders, 78, to remove a blockage in one of his arteries.

Mr Sanders said he was feeling "great" after leaving hospital on Friday.

His doctors said "two stents were placed in a blocked coronary artery in a timely fashion". 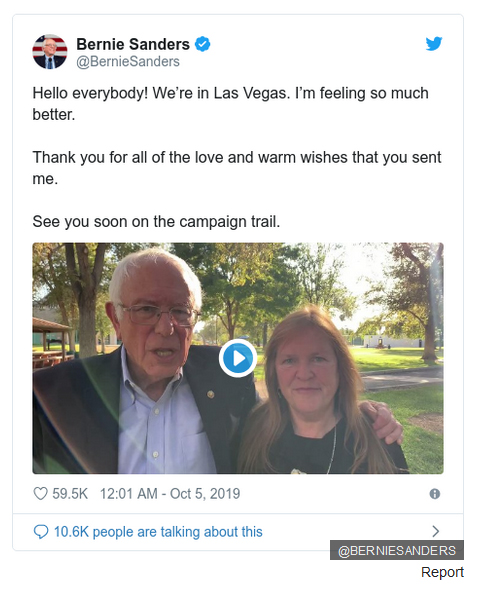 (Mother Jones) Microsoft announced Friday that it had uncovered a hacking group associated with the Iranian government that had targeted journalists, current and former government officials, and at least one US presidential campaign.

The company released a statement saying that four consumer Microsoft email accounts had been compromised by a group its calling “Phosphorous,” but that those accounts did not belong to anyone associated with a presidential campaign or the government. The attackers were first observed making more than 2,700 attempts to identify specific Microsoft accounts over a 30-day period beginning in August, Microsoft said, and then targeted 241 specific accounts with phishing emails, fake LinkedIn accounts, and password-reset requests.

“While the attacks we’re disclosing today were not technically sophisticated, they attempted to use a significant amount of personal information both to identify the accounts belonging to their intended targets and in a few cases to attempt attacks,” wrote Tom Burt, a Microsoft vice president overseeing customer security. “This effort suggests Phosphorous is highly motivated and willing to invest significant time and resources.”

The Democratic National Committee also issued a warning to campaigns on Friday revealing that the committee had been contacted by Microsoft, suggesting they check system logs for a related IP address, and offering advice as to how to defend against such attacks.


Warren Comes Out Swinging for Labor at California Town Hall

SAN DIEGO (Courthouse News) — Walking onstage as the sun set on San Diego Bay Thursday and loudspeakers played Dolly Parton’s “9 to 5,” Democratic presidential contender Senator Elizabeth Warren shared personal stories with California voters about financial troubles her family faced and how her labor plan could help others like her.

….On the day she released her labor policy plan this week, Warren was endorsed by labor-backed California Assemblywoman Lorena Gonzalez, whose aggressive bill aimed at ensuring protections for gig economy workers was recently signed into law by Gov. Gavin Newsom.

Gonzalez called Warren’s policy plan, “the best labor worker plan I’ve ever seen in my entire life,” when she introduced the presidential candidate to a crowd of thousands of San Diegans gathered at the downtown Waterfront Park.

When Warren came on stage she said Gonzalez’s AB5, which will take effect Jan. 1, will improve the lives of California workers.

…“If there is a decision to be made in Washington, it has been made by money. That is corruption, and that’s why I’m in this fight,” Warren said.

…Lau said the campaign received an average contribution of $26 from more than half a million people. More than 300,000 of those third-quarter donors made their first-ever contribution. Lau also noted Warren’s grassroots campaign didn’t take any money from Washington lobbyists, corporate political action committees or any other PACs.

…Both Warren and lefty rival Bernie Sanders claim to be 100% grassroots-funded, a term without a firm definition but emphasized by the campaigns as eschewing donations from groups like drug companies and fossil fuel executives, while also refusing to hold closed-door fundraisers. Both have used funds left over from previous campaigns held before they refused big donors, The Washington Post reported last month.

This is not a very substantive post - but it is sometimes good to remember just how extraordinary and rare of a candidate (in American politics) Bernie is:

Q3 Democratic fundraising numbers are in:

Edit: Warren is not included in this graphic, but she came in second just after Bernie @ $24.6 million.

Biden: "No indication of any conflict of interest"

Yeah, Joe, that's not how it works. The conflict of interest is not the part that's deniable.

Trump has lost 25 points of support with rural voters as Joe Biden leads him in the Badger State by nine percent, 48%-39% in a new Fox News poll of the state.

Trump won rural voters by 27 points in 2016. They now back him over Biden by only 2 points.

By a 19-point margin, Wisconsin voters think tariffs hurt rather than help the economy, and more oppose building a wall along the southern border by 10 points.

Voters who say tariffs hurt the economy prefer Biden by a 61-point margin. Those who think tariffs help support Trump by 65.

Trump beat Hillary Clinton in Wisconsin by less than one percentage point, making him the first Republican to win the state since 1984. Ninety-two percent of Clinton voters back Biden, while 83 percent of Trump voters stick with him.

Former Rep. Joe Walsh, one of the Republicans challenging President Donald Trump for the party's nomination in the 2020 presidential race, called the incumbent president "a traitor" and said he'd vote to impeach him if he was still in Congress.

"This is a strong term I'm going to use, but I'm going to say it on purpose: Donald Trump is a traitor," Walsh said Sunday on CNN's "State of the Union."


Biden leads the Democratic primary in the state with 39% to 22% for Warren, 9% for Buttigieg, 6% for Sanders, 3% for Harris and Andrew Yang, 2% for Cory Booker, and 1% each for Julian Castro and Beto O'Rourke. There is a massive racial divide. Warren leads Biden 31-26 with white voters, with Buttigieg also entering double digits at 12%. But with African American voters Biden gets 63% to 6% for Sanders with Warren and Buttigieg each getting 3% along with O'Rourke.

Warren scored 26.6 percent in the average compared to Biden's 26.4 percent. It marks the first time she's led the polling.