I believe this is at least a tie for Trump's worst approval by Quinnipiac.

(Common Dreams) The Democratic establishment is looking at the party's 2020 presidential primary field and seeing nothing but reasons to fear a progressive nominee—though they prefer one of the two to the other.

That's according to a number of reports over the past two days which suggest that powerful elites in the party are increasingly worried about the potential of a nomination win by either Sen. Bernie Sanders (I-Vt.) or Sen. Elizabeth Warren (D-Mass.), both of whom who have made progressive change a centerpiece of their campaigns.

"The presidential primaries are not going at all the way these rich and powerful Democrats want," wrote The Nation's Jeet Heer on Wednesday. "Their preference is for a centrist presidential candidate."

On Tuesday, New York Times reporter Jonathan Martin found that major party donors are increasingly worried that Warren particularly—Sanders is not mentioned until the article's penultimate paragraph—will take the nomination and are willing to do whatever it takes to stop that from happening. The party elite are courting members of the party like former Secretary of State Hillary Clinton, Sen. Sherrod Brown (D-Ohio), and former Massachusetts Gov. Deval Patrick, as well as nominal independents like former New York City Mayor Mike Bloomberg to jump in the primary race. But nobody, at least so far, is biting.

(Vox) On Wall Street, there are rich guys, and then there are very rich guys. And in the first camp, there are a surprising number who think an Elizabeth Warren presidency would not be the apocalypse.

“You know what I like about Warren? Warren doesn’t want my money, actually,” said one mid-level hedge fund executive who has already maxed out on his donation to the Massachusetts Democrat in the 2020 presidential primary. “My firm is great, but some people in the industry are scumbags.”

Warren is a longtime critic of the financial industry, and she has made her fair share of enemies among some of its major players. There has been a litany of stories in recent months — including one I wrote — quoting finance executives and bankers on how disastrous they believe a Warren presidency would be: Deciding between Donald Trump and Warren is a “decision between sickness and death.” Major Wall Street Democratic donors will sit the election out. Warren is the one candidate who is “toxic for the business community.”

But not everyone on Wall Street hates her. In fact, there are plenty of people who believe the idea of Warren in the White House sounds pretty good. And it’s not a grudging acceptance of her worldview but instead genuine support for it.

Some in the industry believe that the excesses of the financial system continue to be a problem in the wake of the Great Recession and that corporate concentration, wealth inequality, and lax regulation are still issues that need addressing. Do they think she’s 100 percent right on everything? No. But they know she’s smart, and they think she’s approaching policy with a scalpel, not a sledgehammer. They believe Warren when she says she is a capitalist and are on board with her brand of capitalism.

Although he is probably going to lose, so it isn't worth mentioning it, but this Nathan J. Robinson piece about Buttigieg is pretty good:

Before I dive into Shortest Way Home’s account of the life and career of Peter Buttigieg, let me be up front about my bias. I don’t trust former McKinsey consultants. I don’t trust military intelligence officers. And I don’t trust the type of people likely to appear on “40 under 40” lists, the valedictorian-to-Harvard-to-Rhodes-Scholarship types who populate the American elite. I don’t trust people who get flattering reams of newspaper profiles and are pitched as the Next Big Thing That You Must Pay Attention To, and I don’t trust wunderkinds who become successful too early. Why? Because I am somewhat cynical about the United States meritocracy. Few people amass these kind of résumés if they are the type to openly challenge authority. Noam Chomsky says that the factors predicting success in our “meritocracy” are a “combination of greed, cynicism, obsequiousness and subordination, lack of curiosity and independence of mind, [and] self-serving disregard for others.” So when journalists see “Harvard” and think “impressive,” I see it and think “uh-oh.”

Nathan J. Robinson's writing amuses and enlightens me the way Matt Taibbi used to. Somewhere along the way, though, Taibbi got too arrogant, too ideological, and too smug, and it shows in his writing. Robinson also picks better targets, and targets them for the right reasons. Taibbi's shtick is to make the elite look stupid -- to show that the emperor has no clothes. Robinson tries to show you what's on the inside, and why you shouldn't trust them. He doesn't make fun as often (as Taibbi); his method is more about sneering.

Impeach and remove Trump (no prior):

Short on cash and falling in the polls, Kamala Harris plans to cut staff in her Baltimore headquarters and reduce pay for advisers in an effort to keep her presidential campaign afloat.

Campaign manager Juan Rodriguez outlined the restructuring in a memo, citing an “incredibly competitive resources environment” and a need to reduce spending to maximize prospects in Iowa. He said he would “take a pay cut along with all consultants.”

The changes include redeploying staff from key early states of New Hampshire, Nevada and her home state of California to Iowa, where Harris is making a make-or-break bet. Her operation in South Carolina, another important early state, won’t change, the memo said.

The decision to cut staff is Harris’s second course correction, coming six weeks after her campaign said she would place a premium on Iowa and campaign heavily there.

-----
‘The stakes are enormous’: is Hillary Clinton set for a White House run?
Mon 4 Nov 2019 07.00 GMT
The candidate who lost to Trump is making all the right moves as some fear a primary gone too far left. It’s a tantalising notion, but most observers counsel caution – and a dose of realism
Ahigh-profile book tour. Countless TV interviews. Political combat with a Democratic primary candidate and Donald Trump. A year before the US presidential election, it looks like a campaign and it sounds like a campaign but it isn’t a campaign. At least, not as far anyone knows.
Yet a recent surge of activity by Hillary Clinton, combined with reports and columns suggesting the Democrats have not found the right candidate, have made a 2016 rematch a fun, speculative and potentially intriguing topic of Washington conversation.
The sense that something strange is going on began a few weeks ago. A book is a traditional vehicle for a candidate. The former secretary of state launched The Book of Gutsy Women, co-written with daughter Chelsea, and embarked on a tour that included events, speeches and late-night TV appearances.
Clinton, 72, whose narrow, devastating defeat by Trump was one of the greatest upsets in political history, has also become more prolific and pugnacious on Twitter.
https://www.theguard...white-house-run 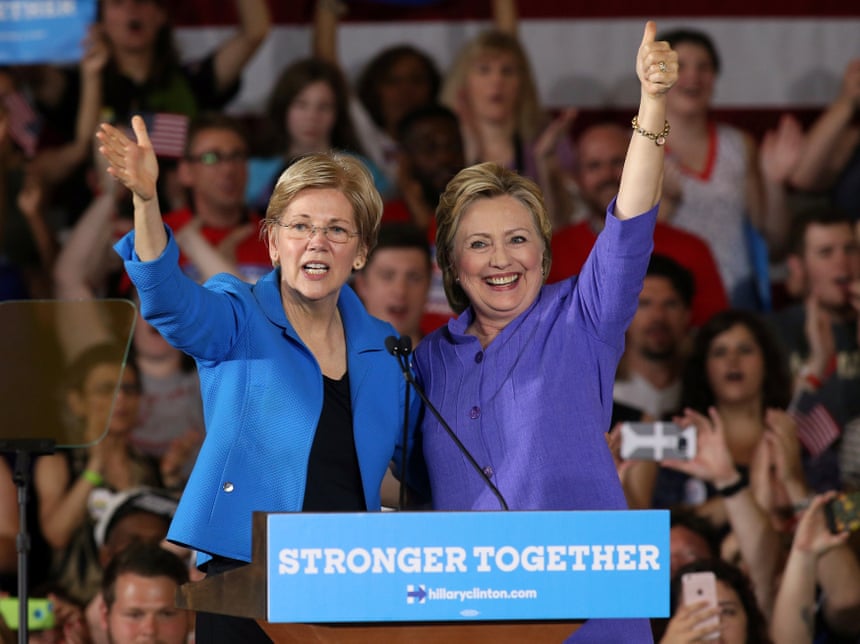 They also polled on how well Biden would do against three of his top rivals if it were a two-person race:

•Conversely, Biden’s advantage in head to head match-ups against both Sanders and Harris widened since August.


Former San Antonio mayor Julián Castro will refocus his 2020 presidential bid on Iowa, Nevada and Texas and has informed staffers layoffs may be coming, CNN reports, citing people familiar with the plans.

Castro's campaign has been considered a long shot since it launched in January. Last month, the candidate — who's polling in the single digits — warned that if he couldn't raise $800,000 by the end of October, he'd be forced to withdraw.

Donors helped Castro meet that goal, and CNN reports that he has no immediate plan to drop from the race. However, citing its unnamed source, the network said top campaign leadership wanted to be as "clear as possible" with staffers that they're free to look for other work.

Observers have been waiting for the crowded Democratic presidential field to narrow, and the news from Castro's camp is another recent indication that time may soon be at hand.