Scientists say they have discovered humanity's oldest known drawing on a small fragment of rock in South Africa.

The drawing is about 73,000 years old, and shows cross-hatch lines sketched onto stone with red ochre pigment.

Scientists discovered the small fragment of the drawing - which some say looks a bit like a hashtag - in Blombos Cave on the southern coast.

The find is "a prime indicator of modern cognition" in our species, the report says.

While scientists have found older engravings around the world, research published on Wednesday in the journal Nature says the lines on this stone mark the first abstract drawing. 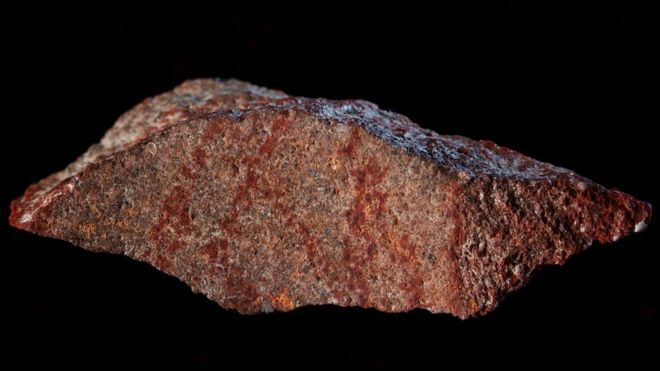 Are they sure that it's a drawing? Or can this be the result of something else--such as some kind of environmental damage to this rock?

Are they sure that it's a drawing?

The big problem of anthropology: there is almost impossible to recognize the first examples of art. These lines could arise accidentally and nobody even noticed them, or they could have a profound spiritual meaning. Nobody knows... Btw, if my memory serves, there are also stone choppers which are clearly made more perfect than it required for purely utilitarian use. And they're much older than these lines.

If they've recognized it as ochre, then that implies this is artistic.