113 replies to this topic

A Possibly Historic Snow Storm in the West, Plus a Heat Wave in the East - What's Going On?

(Discover) Historic snow and a heat wave? That’s what a downright loopy jet stream pattern is bringing to large parts of the United States.

Parts of the Northern Rockies are bracing for what the National Weather Service in Missoula, MT is describing as an “historic winter storm this weekend,” with up to five feet of snow forecast. (Click on the graphic above for details.)

Although this part of the United States is no stranger to early autumn snow, it’s not usually measured in feet.

Meanwhile, parts of the U.S. East Coast are continuing to experience temperatures well above normal for this time of year — and conditions are forecast to heat up even more, potentially to record-high levels next week.

High tides and strong winds caused flooding in some parts of the New Jersey shore Friday.

No major problems were reported. But Sea Bright's fire department conducted numerous rescues of people who had become stranded in flood waters overnight Thursday into Friday morning in the particularly flood-prone community, which is wedged between the ocean and the Shrewsbury River.

Ocean City and Ventnor opened schools two hours late Friday to let flood waters subside before parents and school buses tried to navigate the roadways. And Wildwood closed a bridge into the city during the morning high tide.

Parts of Long Beach Boulevard, the main road through Long Beach Island, also were impassible Friday morning because of flooding. ...

For Jersey Shore homeowners, hurricane and flood threats are worth the risk
https://www.inquirer...k-20191007.html

The Ronald Reagan Presidential Library is under threat from a new blaze near Los Angeles - one of several wildfires burning across California.

The region is under a rare "extreme red-flag warning" from weather officials as gusts approach hurricane-level speeds, over 70mph (113km/h).

There is concern that the winds will also fan the nearby Getty fire, which has burned through 745 acres.

Wildfires across California have led to mass evacuations and power cuts.

The latest fire broke out near the Ronald Reagan Presidential Library in Simi Valley, about 40 miles north-west of Los Angeles. The blaze, dubbed the Easy Fire, has burned 1,300 acres so far. 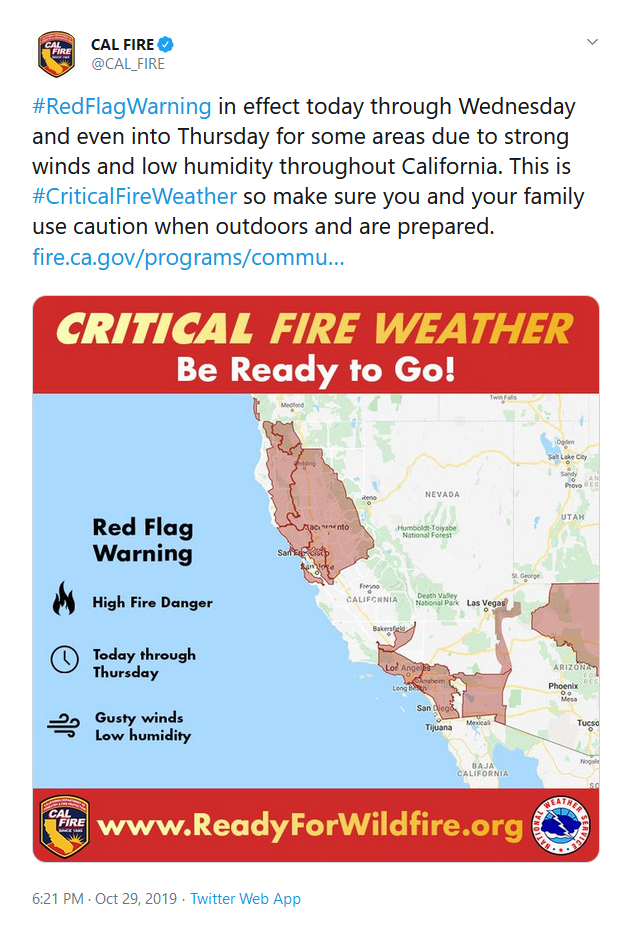 < 2-3ft of water would submerge many average sized car tires... I think you meant inches.
MG-  No I meant feet. None of the areas shown had cars parked within their deepest parts.
MG- ...I wasn’t going to risk bringing any of my vehicles into the water and risk damaging them.
<< hate to be the realtor who specializes in this area trying to convince new buyers that this is no big deal.
MG- You wouldn’t be surprised then at just the high amount of properties for sale at below market value

Image below. 30-second video driving by several flooded streets at the link.

Venice was hit by the highest tide in more than 50 years late Tuesday, with tourists wading through flooded streets to seek shelter as a fierce wind whipped up waves in St. Mark's Square.

The exceptionally intense "acqua alta," or high waters, peaked at 1.87 metres (six feet) as the flood alarm sounded across the Italian city of canals, the tide monitoring centre said.

The exceptional flood, which he blamed on climate change, was "a wound that will leave a permanent mark".

Residents say such storms now occur on a weekly basis, as topsoil from drought-ravaged farms is blown through the town


Residents told Guardian Australia it was like a “wall of dust”, a danger to asthmatics, and “unliveable”. And, for many, it is not even the worst dust storm this year. In May residents reported a storm as the town’s worst in 40 years.

“This is bad but recently there have been probably been three or four a week.”

“I have been here for 10 years and have never experienced anything like this. We used to have a dust storm a year, this is now a weekly basis. At its worst I couldn’t see across the road. This time the heat, because it is 40C, coupled with the dust just made it unliveable. You couldn’t go outside.

“It is really concerning to have young children and to feel like you can’t leave your house. You’re kind of trapped.”

Appleby said the extended drought had devastated farming communities and made the dust storms more frequent.

“We haven’t seen rain in months. It is absolutely climate-induced. The drought in this region is crippling farmers. And the dust in the sky is that farmers’ topsoil. When you put it into perspective like that it is terrifying.”

Appleby, who also has a six-year-old in school, said it was scary to think that this would be the future for her children

Mount Shasta, California, home of the world record for a single dump (189 inches in February 1959) is getting pounded by a storm of biblical proportions. NOAA is predicting as much as 18 feet of snow could fall on Mt. Shasta over 4 days and as much as 22 feet in a 7 day timeframe. Here is a day-by-day breakdown from the National Weather Service.

Thursday day: Snow. The snow could be heavy at times. Steady temperature around 18. Wind chill values as low as -9. Windy, with a south southwest wind around 75 mph, with gusts as high as 110 mph. Chance of precipitation is 100%. Total daytime snow accumulation of 33 to 39 inches possible.

Thursday night: Snow. The snow could be heavy at times. Low around 15. Wind chill values as low as -8. Windy, with a south southwest wind 85 to 95 mph, with gusts as high as 115 mph. Chance of precipitation is 100%. New snow accumulation of 36 to 42 inches possible.

Friday day: Snow showers. Temperature falling to around 15 by 4pm. Wind chill values as low as -12. Windy, with a south southwest wind 80 to 85 mph decreasing to 70 to 75 mph in the afternoon. Winds could gust as high as 115 mph. Chance of precipitation is 100%. New snow accumulation of 21 to 27 inches possible.

By STEFANIE DAZIO and JOHN ANTCZAK

Snow shut down vital Interstate 5 in Tejon Pass through the mountains north of Los Angeles and stopped traffic on Interstate 15 over Cajon Pass in the inland region to the east. I-15 finally reopened in both directions in the afternoon but then authorities later shut down about 45 miles (73 km) of the freeway from Baker, California, to Primm, Nevada, on the way to Las Vegas because of snow and ice.

A truck driver was found unresponsive in a rig stopped along I-5 in Tejon Pass. Kern County firefighters pronounced him dead, according to the California Highway Patrol’s online incident log.

It was not immediately known if the death was weather-related. 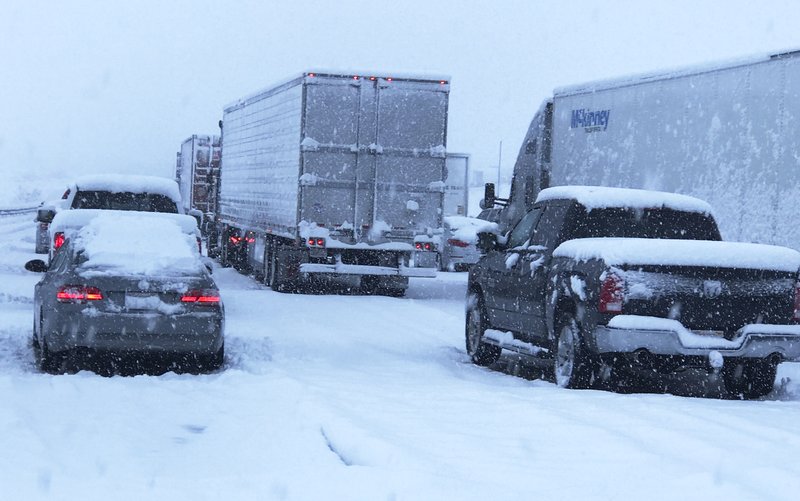 This photo provided by Johnny Lim shows a snow covered northbound I-15 in the Cajon Pass between the San Bernardino Mountains and the San Gabriel Mountains in Southern California on Thursday, Dec. 26, 2019. Lim, of Corona, said he's been stuck in his vehicle for about five hours on his way to Las Vegas. A powerful winter storm brought a deluge of rain and snow to Southern California, triggering tornado warnings and bringing post-Christmas travel to a halt on major routes. (Johnny Lim via AP)

Storm Gloria: Death toll rises to 11 in Spain as south-west France battens down the hatches

The death toll from Storm Gloria in Spain rose to 11 people on Thursday as freak weather continues to batter the east of the country.

The Balearic Islands and eastern regions including Catalonia and Valencia have borne the brunt of the storm now entering its fifth day.


Winds of more than 140 km per hour, waves reaching more than 10 metres and heavy snow and rainfall have unleashed chaos, crippling transport and destroying infrastructure.

UK weather: Ciara set to be most intense storm to hit UK since 2013

The UK is set to be hit by the most intense storm in seven years, with winds up to 80mph as the Met Office issues a "danger to life" warning this weekend.

Ciara - the third named storm of the season - will "barge her way through" the country, say forecasters.

And there will be "impacts across the whole of the UK" between 6pm on Saturday and midnight on Sunday.

Scientists in Antarctica have recorded a new record temperature of 20.75 degrees Celsius (69.35 Fahrenheit), breaking the barrier of 20 degrees for the first time on the continent, a researcher said Thursday.

He cautioned that the reading, taken at a monitoring station on an island off the continent's northern tip on February 9, "has no meaning in terms of a climate-change trend," because it is a one-off temperature and not part of a long-term data set.

But news that the icy continent is now recording temperatures in the relatively balmy 20s is likely to further fuel fears about the warming of the planet.

The reading was taken at Seymour Island, part of a chain off the peninsula that curves out from the northern tip of Antarctica.

The island is home to Argentina's Marambio research base.

Schaefer, a soil scientist, said the reading was taken as part of a 20-year-old research project on the impact of climate change on the region's permafrost.

The previous high was in the 19s, he said.

"We can't use this to anticipate climatic changes in the future. It's a data point," he said.

"It's simply a signal that something different is happening in that area."

At least 2 killed when tornado smashes into Nashville

At least two people were killed when a tornado struck parts of Nashville and eastern communities early Tuesday, triggering warning sirens and damaging dozens of structures, according to officials and reports. Injuries were also reported.

The tornado was spotted northwest of downtown Nashville and took aim at parts of the city, National Weather Service meteorologist Faith Borden said. Mount Juliet and Lebanon also appeared hard hit, she said, but the weather service has not yet completed a damage assessment.

Police in Mount Juliet, east of Nashville, reported that the town of around 30,000 was "impacted significantly" with multiple homes damaged and multiple injuries.

Storms Turn Deadly in Mississippi; At Least 300 Homes Damaged or Destroyed in Louisiana

By Ron Brackett and Jan Wesner Childsless than an hour ago weather.com

At least three people are dead in Mississippi as severe weather and strong tornadoes moved across the Deep South Sunday evening.

The Mississippi Emergency Management Agency confirmed one fatality in Walthall County, about 50 miles west of Hattiesburg, and two fatalities in Lawrence County, about 35 miles to the north.

Rescue crews were searching homes in Jones County, where damage was reported to multiple homes and commercial buildings. Paul Sheffield, the county's emergency management director, told weather.com in a phone interview that several people were injured, some seriously. Sheffield said four people were unaccounted for.

Much of Europe has been basking in a mini-heat wave since Friday, and countries like the UK, France and Spain have experienced near-record temperatures.

But with lockdowns and social distancing measures in place across the continent, this is a summer like no other.