First, a word about what I do not  want this thread to be about.  I do not want to see reports of findings from a particular site end up in this site.  I think this forum is underpopulated as it is, so I don't see the need to consolidate information about particular sites into one thread.  Better to have clear titles in totally separate threads that readers can pick and choose among as their fancy dictates.

Rather, this should be a thread about archaeology as a whole.  So, such things as:  technological instruments used in archaeological research; trends in funding; political developments affecting regional archaeological research (where an entire region is affected instead of just one site); developments (positive or negative) in attitudes toward the field; all should be included.  Also, broad findings arrived at through a variety of sources (meaning sites) would also be appropriate.  I am probably missing some obvious examples of what would be appropriate, but again anything that is not peculiar to the findings of an individual site (or for that matter a group of geographically proximate sites).

What prompted me to start this thread was the article I found that I have cited and linked below.  I realized that we did not have such a catch-all thread that addresses the theory and practice of archaeology.  (Or at least if we did that it has receded beyond the first few pages). At any rate, without further introduction:

(The Conversation) Archaeology – the name conjures up images of someone carefully sifting the sands for traces of the past and then meticulously putting those relics in a museum. But today’s archaeology is not just about retrieving artifacts and drawing maps by hand. It also uses the tools of today: 3D imaging, LiDAR scans, GPS mapping and more.

Today, nearly all archaeological fieldwork in the U.S. is executed by private firms in response to legal mandates for historic preservation, at a cost of about a billion dollars annually. However, only a minuscule fraction of the data from these projects is made accessible or preserved for future research, despite agencies’ clear legal obligations to do so. Severe loss of these data is not unusual – it’s the norm.

The primary data include things like counts of different kinds of artifacts; information on fragments of plant and animals found in fire pits; maps and photographs of ruined buildings; dates from charred roof beams; and the chemical composition of paint on pottery. This allows researchers to understand life in the past – inferring, for example, human population size and movement, social organization, trade and diet.

The data further enable archaeologists to study social processes that are important in today’s world, but that operate so slowly that they aren’t perceptible on time scales available in other social sciences. Why does migration occur? Why do migrant groups maintain their identities in some circumstances and adopt new ones in others? What factors have allowed some societies to persist over very long time periods?

"Across the East Coast of the United States, some of the most visible forms for pre-contact Native American material culture can be found in the form of large earthen and shell mounds," said Binghamton University anthropologist Carl Lipo. "Mounds and shell rings contain valuable information about the way in which past people lived in North America. As habitation sites, they can show us the kinds of foods that were eaten, the way in which the community lived, and how the community interacted with neighbors and their local environments.

In areas that are deeply wooded or consist of bayous and swamps, there exist mounds that have eluded more than 150 years of archaeological survey and research. Due to vegetation, these kinds of environments make seeing more than a couple of dozen feet difficult, and even large mounds can be hidden from view, even when one systematically walks on the terrain.

The use of satellites and new kinds of aerial sensors such as LiDAR (light detection and ranging) have transformed the way archaeologists can gather data about the archaeological record, said Lipo. Now scientists can study landscapes from images and peer through the forest canopy to look at the ground. LiDAR has been particularly effective at showing the characteristic rises in topography that mark the presence of mounds. The challenge to archaeologists, however, is to manage such a vast array of new data that are available for study. Object based image analysis (OBIA) allows archaeologists to configure a program to automatically detect features of interest. OBIA is a computer-based approach to use data from satellite images and aerial sensors to look for shapes and combinations of features that match objects of interest. Unlike traditional satellite image analyses that looks at combinations of light wavelengths, OBIA adds characteristics of shape to the search algorithm, allowing archaeologists to more easily distinguish cultural from natural phenomena.

Thanks to Technology, Archaeological Discoveries are Happening Faster Than Ever Before

Paleoproteomics, the study of ancient proteins, can determine the species of a fossil and recently linked a 9-foot tall, 1,300-pound extinct ape that lived nearly 2 million years ago to today’s orangutans.

Dental calculus – the hardened plaque that your dentist scrapes off your teeth – is particularly informative, revealing everything from who was drinking milk 6,000 years ago to the surprising diversity of plants, some likely medicinal, in Neanderthal diets. Calculus can help scientists understand ancient diseases and how the human gut microbiome has changed over time. Researchers even find cultural clues – bright blue lapis lazuli trapped in a medieval nun’s calculus led historians to reconsider who penned illuminated manuscripts.

….While biomolecules help researchers zoom into microscopic detail, other approaches let them zoom out. Archaeologists have used aerial photography since the 1930s, but widely available satellite imagery now enables researchers to discover new sites and monitor existing ones at risk. Drones flying over sites help investigate how and why they were made and combat looting.

Originally developed for space applications, scientists now use LIDAR – a remote sensing technique that uses lasers to measure distance – to map 3D surfaces and visualize landscapes here on Earth. As a result, ancient cities are emerging from dense vegetation in places like Mexico, Cambodia and South Africa.

… Technologies that can peer underground from the surface, such as Ground Penetrating Radar, are also revolutionizing the field – for example, revealing previously unknown structures at Stonehenge. More and more, archaeologists are able to do their work without even digging a hole. 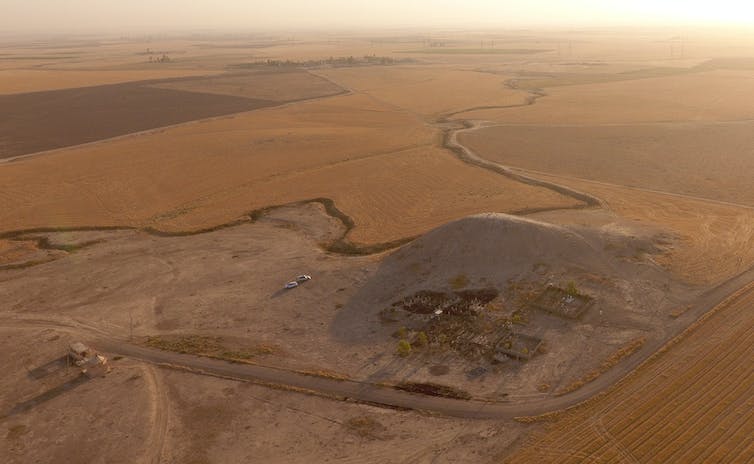 Here, a drone captured a tell (a mound indicating build-up of ancient settlements) in the Kurdistan Region of Iraq.

Also tagged with one or more of these keywords: Archaeology, Prehistoric Times, Archaeological Technology