I finished re-reading Thomas Kuhn’s The Essential Tension a week or so ago.  One comment that struck me as fascinating was how at the time of the publishing of that book there was actually very little in the way of actual experimental and observational confirmation of Einstein’s Theory of Relativity. What was fascinating about that comment is that, from my layman’s perspective as a casual reader of science, it seems like a great many subsequent announcements have come forth that actually do confirm Einstein’s Theory.  So, I thought it would be fun to start a thread reviewing some of those announcements.

Because I did not want to confine myself to recent announcements, I have elected to put this thread in the History forum.  However, if any of you come across new announcements, please feel free to share them with us here.

Now, I suppose anybody with an interest in this topic could otherwise do what I did – type into their search engine something like “confirmation of Einstein’s Theory of Relativity.”  My purpose in starting this thread is also to make a point about how science advances.  That is to say how theories help us to better understand the universe in which we reside, but also how a scientific approach can help us increase our confidence in our understanding.

This is becoming increasingly critical at this time in our history.  Philosophical relativism and de-constructionist ideas have caused a widespread misunderstanding of how humans can come to better understand reality.  That is to say, issues such as global warming have been confused by many with an attitude that nothing is really knowable, that all “knowledge” is culturally specific, that therefore humans who believe in the problems of global warming belong to a group who are led by folks who have ulterior and sinister reasons for their belief, etc.

All of this is thus an indirect way of junking the whole scientific method. Put another way, scientists are thought of as just belonging to another group of people who are just as ignorant about “objective” reality as the rest of humanity.  Ironically, skeptics of Kuhn accused him of doing just that.  In The Essential Tension Kuhn argues that this accusation was based on a horrible misreading of his The Structure of Scientific Revolutions .

My hope is that understanding how something like the Theory of Relativity can be confirmed through further observation and experimentation will develop a new found appreciation for science. The kind of science that Kuhn wrote about.

First up, by way of articles on this topic:

(Phys.org) Albert Einstein predicted that whenever light from a distant star passes by a closer object, gravity acts as a kind of magnifying lens, brightening and bending the distant starlight. Yet, in a 1936 article in the journal Science, he added that because stars are so far apart "there is no hope of observing this phenomenon directly."

Now, an international research team directed by Kailash C. Sahu has done just that, as described in their June 9, 2017 article in Science. The study is believed to be the first report of a particular type of Einstein's "gravitational microlensing" by a star other than the sun.

(Wikipedia) In 1974, (Russell Alan) Hulse and Taylor discovered binary pulsar PSR B1913+16, which is made up of a pulsar and black companion star. Neutron star rotation emits impulses that are extremely regular and stable in the radio wave region and is nearby condensed material body gravitation (non-detectable in the visible field). Hulse, Taylor, and other colleagues have used this first binary pulsar to make high-precision tests of general relativity, demonstrating the existence of gravitational radiation. An approximation of this radiant energy is described by the formula of the quadrupolar radiation of Albert Einstein (1918).

(Wikipedia) Beginning in 1974, Hulse, Taylor and others have studied the behaviour of binary pulsars experiencing much stronger gravitational fields than those found in the Solar System. Both in the weak field limit (as in the Solar System) and with the stronger fields present in systems of binary pulsars the predictions of general relativity have been extremely well tested locally.

(Space.com) By analyzing the extraordinarily strong gravitational pull of the giant black hole at the center of the Milky Way on a star near it, astronomers have shown that Einstein's ideas about space and time still hold true as the best description yet of how gravity works.

According to Einstein's theory of general relativity, gravity results from how mass warps space and time. The greater an object's mass, the stronger its gravitational pull.

Scientists have largely tested general relativity's predictions in relatively weak gravitational fields, such as those on Earth and in the solar system. In the presence of much stronger gravitational fields — such as those of the supermassive black holes thought to lurk in the hearts of virtually all large galaxies — researchers might discover violations of general relativity that could lead to new theories that might help explain cosmic mysteries such as dark matter and dark energy.

"Einstein's right, at least for now," said Andrea Ghez, a co-lead author of the research and astronomy professor at the University of California Los Angeles, in a statement. "Our observations are consistent with Einstein’s theory of general relativity. However, his theory is definitely showing vulnerability. It cannot fully explain gravity inside a black hole, and at some point we will need to move beyond Einstein's theory to a more comprehensive theory of gravity that explains what a black hole is." 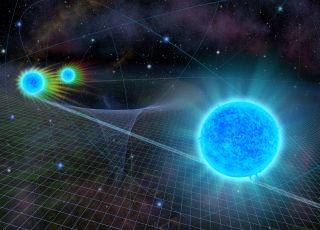 There is much closer and simpler evidence, the clock(s) on Earth orbit:

As Einstein explained, gravity arises because massive bodies warp space-time... That bizarre effect was first confirmed to low precision in 1959 in an experiment on Earth and in 1976 by Gravity Probe A, a 2-hour rocket-born experiment that compared the ticking of an atomic clock on the rocket with another on the ground.

Jessica found this article on the internet: 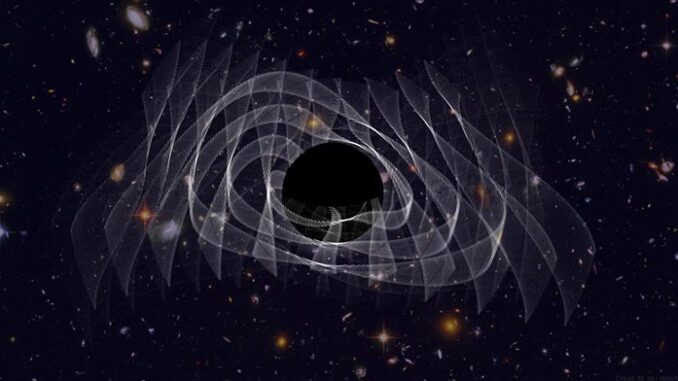 An illustration of a supersized black hole resulting from the merger of two smaller black holes. The collision has caused the black hole to ring and radiate gravitational waves (white). [Graphic credit: Maximiliano Isi/MIT]


Astrophysicists have heard a black hole ringing like a bell, for the first time, according to Will Farr associate professor at Stony Brook University in New York and group leader for gravitational wave astronomy at the Flatiron Institute‘s Center for Computational Astrophysics in New York City.

Farr and his colleagues presented their findings September 12 in Physical Review Letters.

By reanalyzing the first black hole merger ever detected, the astrophysicists measured the gravitational wave ‘tones’ emitted following the event. The breakthrough comes 10 years earlier than expected and confirms that the properties of black holes are just as Einstein predicted in his theory of general relativity in 1915.

“Previously it was believed these tones were too faint to be detected, yet now we are able to,” says study co-author Farr. “Just like the measurement of atomic spectra in the late 1800s opened the era of stellar astrophysics and classifying and understanding stars, this is the opening of the era of black hole spectra and understanding black holes and the general relativity that sits behind them.”

(Sky & Telescope) Over a century ago, Albert Einstein predicted that massive rotating bodies slightly drag spacetime around them, just like a rotating bowling ball on a rug creates a tiny warp in the fabric. Now, for the first time ever, astronomers have detected and measured this frame-dragging effect in the strong gravitational field of a pair of distant stars. The result, published January 30th in Science, sheds more light on the binary’s evolution.

In 1918 Austrian physicists Josef Lense and Hans Thirring showed that frame-dragging by the Sun should produce a tiny extra precession, a spirograph-like progression of the planets’ orbits, known as Lense-Thirring precession.

They also concluded that this Lense-Thirring precession (not to be confused with the much larger perihelion precession of Mercury) is way too small to measure. That has changed over the past decade, as even-smaller frame-dragging by the rotating Earth has been detected in high-precision satellite experiments, such as NASA’s Gravity Probe B and the LAGEOS laser-ranging satellites.

Now, a team led by Venkataraman Krishnan (Max Planck Institute for Radio Astronomy, Germany) has found evidence of Lense-Thirring precession in the orbit of a strange binary system a few thousand light-years away in the southern constellation Musca, the Fly.

The stellar duo consists of a white dwarf and a slightly more massive, rotating neutron star companion, detected by its radio pulses and designated PSR J1141-6545. The pulsar and white dwarf are coupled in a 4.74-hour, oval-shape orbit that would almost fit inside our Sun.

In this artist’s impression a tiny neutron star is in a tight orbit with a much larger white dwarf that is spinning so quickly, it drags the fabric of spacetime around it.
ESO / L. Calçada

Also tagged with one or more of these keywords: Einstein, Theory of Relativity, Gravity lensing, Astronomy, Physics, Objective Reality, The Scientific Method