I figured we could have a whole thread dedicated to one area of its capabilities: fake news.

And no, you don't have to use the transformer. There are other fake news-making programs out there.

I actually created one years ago: 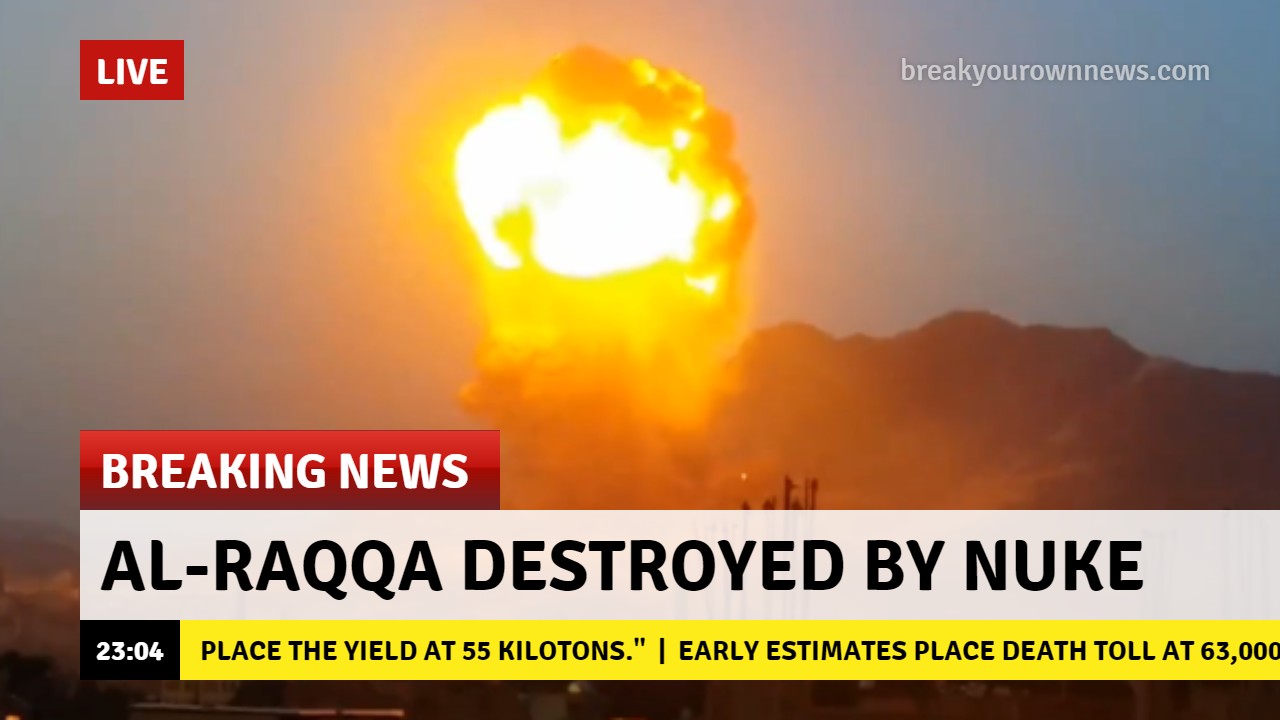 I feel like that 'break your own news' one doesn't really have the same effect anymore given how often it's been used in memes by now.

The White House announced on Thursday that President Donald Trump had ordered the U.S. military to strike Iranian military targets in retaliation for a missile test that it deemed a provocative breach of its international commitments.
A statement issued by the White House said that the military action was an “appropriate and proportional response” for the government of Iran to the hostile and aggressive actions of its Islamic Revolutionary Guard Corps.
“We are demanding that the Iranian regime cease its destabilizing activities in the region, including supporting terrorist organizations like Hezbollah, and its ongoing violations of the human rights of its own people,” the statement said.
The three Iranian military facilities that the Pentagon identified as the targets are the Khorramshahr missile base, the Kavir naval base and the Qom military site.
The strikes come after a series of military exercises by the Iranian Revolutionary Guard Corps, as well as news that earlier this week a missile launched by Iran shot over the borders of the Islamic Republic and into the European Union.
The White House said that “so far, no military personnel have been injured in the attack.”
See more of the latest developments related to the U.S. military strike in Iran:
U.S. strikes Iranian military targets after missile test, chief of staff confirms
‘We are demanding that the Iranian regime cease its destabilizing activities in the region’
Actual details on how many U.S. military personnel are involved in the airstrikes
Photo credit: Joe Raedle/Getty Images
Related
Obama blames Trump for killing U.S.-led coalition’s ‘victory lap’ in Syria
Political scientist analyzes Trump’s Iran deal tweet, calls it ‘Crazy Cousin’s Night’

Donald Trump authorized military strikes on North Korea to silence the “threatening rhetoric and behavior” from the rogue regime, the president said on Wednesday.
“We have decided to take pre-emptive military action in response to North Korea’s continued threatening rhetoric and behavior,” Mr. Trump told reporters on board Air Force One en route to California.
Mr. Trump and members of his administration, including Secretary of State Mike Pompeo, National Security Adviser John Bolton, and South Korean President Moon Jae-in have for some time denounced the conduct of Kim Jong-un’s regime and have stressed that they are working toward the denuclearization of the Korean peninsula.
But on Wednesday morning Mr. Trump said that “effective immediately” the U.S. would “remove the threat” posed by Kim Jong-un’s regime. He added that “provocations” against the U.S. and its allies in the region would now result in an immediate military response.
“We are going to take care of it,” Mr. Trump said. “It’s going to be taken care of.”
"We are taking pre-emptive military action in response to North Korea's continued threatening rhetoric and behavior." We are going to take care of it," says President Trump. #TrumpAtTheYemen pic.twitter.com/MDRS1nlMAD — CNBC Now (@CNBCnow) May 29, 2019
Trump administration officials were quick to work to clarify the President’s statement in the hours following the announcement. On Thursday, Pompeo denied that Mr. Trump had indeed ordered military strikes against North Korea and said that the President had only mentioned an “eye for an eye” approach in response to Kim Jong-un’s intercontinental ballistic missile tests, which last year included the launch of a missile over the northern Japanese island of Hokkaido.
“What the President said was that we may be forced to take additional measures, not to name which country, but he said to take it to the next level if North Korea does not stop,” Pompeo said. “Our message is North Korea has a choice, either behave responsibly, engage in genuine denuclearization or, as the President said, ‘we are going to start escalating the pressure.'”
Pompeo was more circumspect in his responses to the president’s on Thursday.
“I am confident that the president and the military leadership that he has put in place in terms of Cabinet chiefs and others, that’s all of us have that responsibility to make sure that we are prepared and that we are taking appropriate steps,” he said.
But he also left the door open to the possible deployment of U.S. forces north of the demilitarized zone between North and South Korea.
“America’s mission is to prevent the proliferation of nuclear weapons and the weapons of mass destruction, and we will continue to be prepared to defend ourselves, and by the American people,” Pompeo said.
It is impossible to predict the precise consequences of any military action against North Korea. “This is uncharted territory. It’s unthinkable for this president and for this administration,” a senior White House official told CNN.
The next test for the Trump administration will be in its commitment to maintaining U.S. diplomatic and military ties with North Korea. Trump has not ruled out a summit with Kim Jong-un to discuss the denuclearization of the Korean peninsula. It is unknown whether any specific message has been conveyed to the North Korean government over Mr. Trump’s latest military strike announcement.