188 replies to this topic

I'm not sure if express.UK is taken seriously

Oil prices and haven assets rallied after the US killed a top Iranian military commander in a move that has sharply escalated tensions between the two countries.

International benchmark Brent crude jumped 3 per cent to $68.26 a barrel, putting the marker on track for its biggest one-day gain in a month.

Assets that are seen as shelters during times of strife also advanced on Friday. 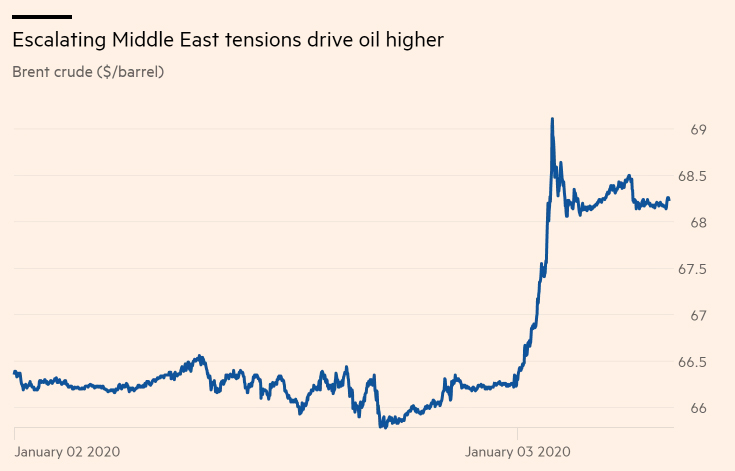 I'd say that on the bright side if Trump starts a war he won't be reelected, but barring Bernie, another liberal like Trump is more of the same anyways so meh. Hillary would have warred with Iran too as would Obama, Bush, Clinton and all the rest until at least Kennedy and possibly farther. It really shows how the Empire of America is in charge of the executive branch not the other way around.

In prior confilcts how long did it take for the retalitation and official war announcements?

In some movies and video games In the last couple of years Iran was portrayed as the bad guy almost like they were mentally preparing the population.

I don't know how long it took. Too young to vividly remember past conflicts and I've never researched it. Maybe a few days or a week at most for some sort of historical announcement? Does anyone remember how long after 9/11 it took for Bush to start the "war on terror?"

I don't know how long it took. Too young to vividly remember past conflicts and I've never researched it. Maybe a few days or a week at most for some sort of historical announcement? Does anyone remember how long after 9/11 it took for Bush to start the "war on terror?"

The United States embassy in Baghdad has called on all its citizens to depart Iraq immediately on Friday. The order follows the US airstrike killing Iranian Quds Force leader Qassem Soleimani and Iraqi militia commander Abu Mahdi al-Muhandis in an air strike.

“Due to heightened tensions in Iraq and the region, the US embassy urges American citizens to heed the January 2020 travel advisory and depart Iraq immediately. US citizens should depart via airline while possible, and failing that, to other countries via land,” it said in a statement.


Chairman of the Foreign Affairs Committee in the last parliament has suggested the UK government did not know that the US was going to carry out an airstrike to kill a top Iranian general.

Tom Tugendhat told the BBC News: “Well I’ve long believed that the purpose of having allies is that we can surprise our enemies and not each other, and it’s been a pattern sadly, which has been a bit of a shame, that the US administration of late has not shared with us and that is a matter of concern.

“I would urge the US administration to share much more closely with allies, particularly those who are fighting alongside in the region, including us.”

He added: “But this is a tactical point, a strategic point is that the United States has rocked the regime much more than for example than the death of Osama bin rocked the Jihadist movement. This is a much more significant incident.”

Tugendhat said the air strike “will doubtless have consequences”.


Michael Morell, the former acting and deputy CIA director, predicted there would be “dead civilian Americans” as a result of the killing of Qassem Suleimani.

US to reportedly deploy thousands more troops to the Middle East

As the US braces for possible reprisals following the killing of Iranian general Qassem Suleimani, the Pentagon is reportedly deploying thousands of additional troops to the Middle East.

The news comes after Iran’s supreme leader promised “severe revenge” on the US, but the move could anger some supporters of Donald Trump, who ran for president on the basis of curtailing America’s military presence abroad.

I am frankly surprised that more people aren’t paying attention that people in Iran of all places are among those celebrating his death.

What could this spell for the country internally?

I don't know about Iraq but Iran isn't celebrating at all he was there most beloved military leader who helped found the country and they are holding 3 days of mourning.

Internally the regime will strengthen as they prepare to attack the US/receive new attacks from the US.

I don't think it'll be that easy for Iran to persuasively convince the US it's too difficult to maintain a military presence in the Middle East. The U.S.' got formidable allies in Saudi Arabia and Israel who have significant military resources and they're willing to contain Iran's movements in the region. There is a very good reason Iran has been cautious as not to brazenly attack US outright.

Iran doesn't need to kick the U.S out of the Middle East. They only need to make trade dangerous in the Straight of Hormuz and bleed the American will for war dry. If America actually invades Iran the war will be as bad or worse than Vietnam and it's unlikely America could win. I'm also not sure America could field the millions of men needed to invade Iran without entertaining domestic revolt. People are not going to tolerate a draft here.

I think it's safe to say the US and Iran are at war now.
Even if Iran does not retaliate id consider continued air strikes as being a war.

I think it's safe to say the US and Iran are at war now.
Even if Iran does not retaliate id consider continued air strikes as being a war.

That sounds like air strikes within Iraq.  Suggesting that the way the "war" will be played out is as a civil war in Iraq.  If that is the case, the assassination is just the latest, though very dramatic, development in a struggle that has been going on for years now.

I think, for context, a recent joint report based on leaked documents to The Intercept is worth recalling. It was referred to in another thread, so I won't quote from it again, except to note that Qassim Suleimani is heavily discussed. Interesting that first these documents are leaked to The Intercept, by an anonymous person (or persons) followed by a targeting of Suleimani for assassination.  At any rate, for those who might have missed the story earlier, here is a link to that article:

It is also of note that the assassination was carried out by way of a drone strike.  I recently posted this in the Drones and UAVs News and Discussion thread:

(The Intercept) The truth is that, through a worldwide drone war we commenced two decades ago, we’ve invented a new form of terror for millions of people across the world. The truth is that we continued to escalate this war in 2019, yet there’s no way to say exactly how much, because the U.S. government refuses to tell its citizens the basic facts about it. The truth is that the best sources of information on this war are two underfunded outfits — the Bureau of Investigative Journalism and Airwars— that aren’t even based in the United States.

…For the most part, our drone war grinds on with no notice taken here at all. Meanwhile, people in an uncertain number of countries live under the unblinking gaze of drones. We can say that the military’s overt program has conducted drone strikes in Afghanistan, Pakistan, Iraq, Yemen, Somalia, Syria, and Libya. In addition, the CIA has a classified program that it does not acknowledge. Through news coverage, we know of alleged CIA strikes in Pakistan, Somalia, Yemen, Afghanistan, and beyond. (Oddly, the New York Times reported in 2017 that the CIA, sensing opportunity as the Trump administration began, sought to expand its operations into Afghanistan for “the first time.”) CIA strikes may be spreading further into West Africa, as the CIA runs counterterrorism missions out of Niger and Somalia.

…What we do know is that the Bureau of Investigative Journalism estimates that the U.S. carried out about 1,000 airstrikes in Afghanistan, Pakistan, Somalia, and Yemen in 2016 — that is, strikes by both drones and manned aircraft. So far in 2019, they believe that the U.S. has conducted 5,425 airstrikes, five times as many. In the month of September, the U.S. upped the pace to almost 40 airstrikes per day.

I repost it here because some questions have been raised as to Trump's legal authority. As the article makes clear, the strike against Suleimani and company is different only in the high profile nature of the target.  I think we here in the U.S. need to seriously rethink how much authority is granted to a president to carry out such low-intensity warfare across such a vast swath of the globe.

How can we consider ourselves champions of such concepts as due process, justice, etc. while at the same time giving our own leadership absolute life and death authority over anybody that resists the will of our president?

That there are definitely unsavory characters out there that are themselves hostile to democratic norms does complicate the picture.

Also tagged with one or more of these keywords: Iran, Persian Gulf, Trump, war