Here is the link:

I will be attending the conference as well, to propose my petition of giving tax cuts/subsidies to orbital debris-removing satellite manufacturers. Here is my petition:

(The Verge) As the number of satellites and space junk in orbit continues to increase, so do the chances of these human-made objects colliding with one another, potentially creating more debris that could threaten other healthy spacecraft. Now, a new tool shows just how crowded Earth orbit is by tracking space objects through their close calls every couple of seconds.

Called the “Conjunction Streaming Service Demo,” the graph tool illustrates in real time the sheer number of space objects — out of an assortment of 1,500 items in low Earth orbit — that get uncomfortably close to one another in a period of 20 minutes. While the X-axis keeps track of the time, the Y-axis shows the short distance between two approaching space objects, ranging from five kilometers to the dreaded zero kilometers. On the graph is a series of arcs demonstrating when two pieces of debris rapidly move toward one another, make their closest approach, and then speed away.

No matter when you glance at the tool, there is always an abundance of arcs on the graph. If the arc is extremely stretched, then two objects just had an extra close call. And some get frighteningly close within just a few minutes. In the time I wrote this story, the closest that two objects got to one another was a mere 60 meters. Each arc is color-coded, too, indicating which types of objects are approaching one another. Green arcs indicate two operational satellites that could potentially move out of each other’s way; yellow arcs indicate one movable satellite and one non-maneuverable object; red arcs indicate two dead objects, which have no choice but to continue on their potential crash course. There are a lot of red arcs on my graph. 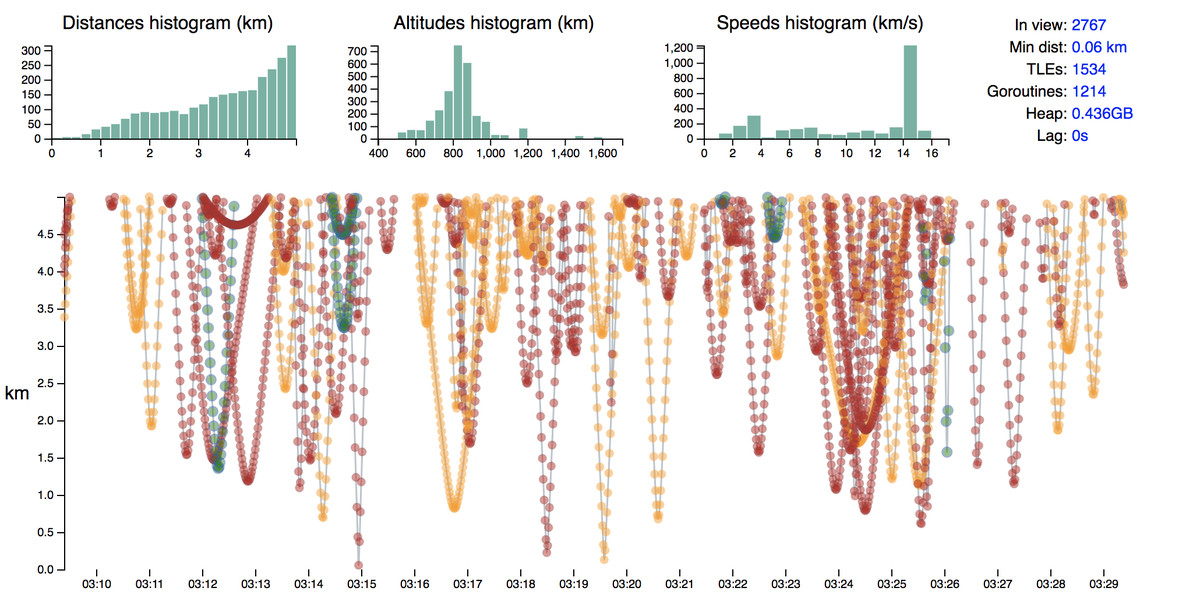 The most notable crash in orbit occurred in 2009 when an Iridium communications satellite collided with a dead Russian satellite.

But that one collision illustrated what’s at stake when satellites get close. The mishap created thousands of pieces of debris in orbit, which then posed their own threats to other functioning spacecraft.