15 replies to this topic

Brutalist architecture, or Brutalism, is an architectural style which emerged in the mid-20th century and gained popularity in the late 1950s and 1960s. It descended from the modernist architectural movement of the late 19th century and of the first half of 20th century,[1][2][3] and is characterized by simple, block-like structures that often feature bare building materials. Exposed concrete is favored in construction; however, some examples are primarily made of brick. Though beginning in Europe, Brutalist architecture can now be found around the world. The style has been most commonly used in the design of institutional buildings, such as libraries, courts, public housing and city halls.

Now, Brutalism is often called a very ugly kind of architecture, as they're often said to resemble bunkers or prisons. Indeed, brutalism is present in many many dystopian and villainous settings such as in the Blade Runner series (probably the best fiction example), BLAME, and Wolfenstein and is often associated with totalitarianism, alienation and secrecy. A real life example of this can be seen in 33 Thomas Street.

It's for that reason why Brutalism can be seen as an acquired taste, but as time passes and styles turn, more and more people are revisiting brutalism and finding beauty in it once more in a sort of Neo-Brutalist revival. Some are reverting to virtual ones in media such as games and in film as previously mentioned in order to construct the brutalist vibe yet again.

A good example is the new game Control which uses brutalism as a setting, and an old one, NaissanceE which takes inspiration from the BLAME manga and thus brutalism. Perhaps the easiest example is this game called "Brutalism: Prelude in Stone" which is a free game that showcases brutalist architecture in a virtual experience: https://moshelinke.i...relude-on-stone

The developer also has more games in similar style: https://moshelinke.itch.io/

Brutalism is by far my favourite architectural style, and personally I enjoy its order, and frankness. Instead of being riddled with pretentious decoration, it is just what it is: an artificial creation. It's strong, rigid, built to last millenia. The greatest coupling is perhaps brutalism and nature, where green intertwines with concrete.

Here are a few of my favourites of this architecture: The Salk Institute, Alexandra Road Estate, Wallace Corporation Headquarters

There's even a fairly active subreddit all to do with brutalist buildings, check it out: https://www.reddit.com/r/brutalism/

/\ So sure? This one reminds me of Star Trek a fair bit. 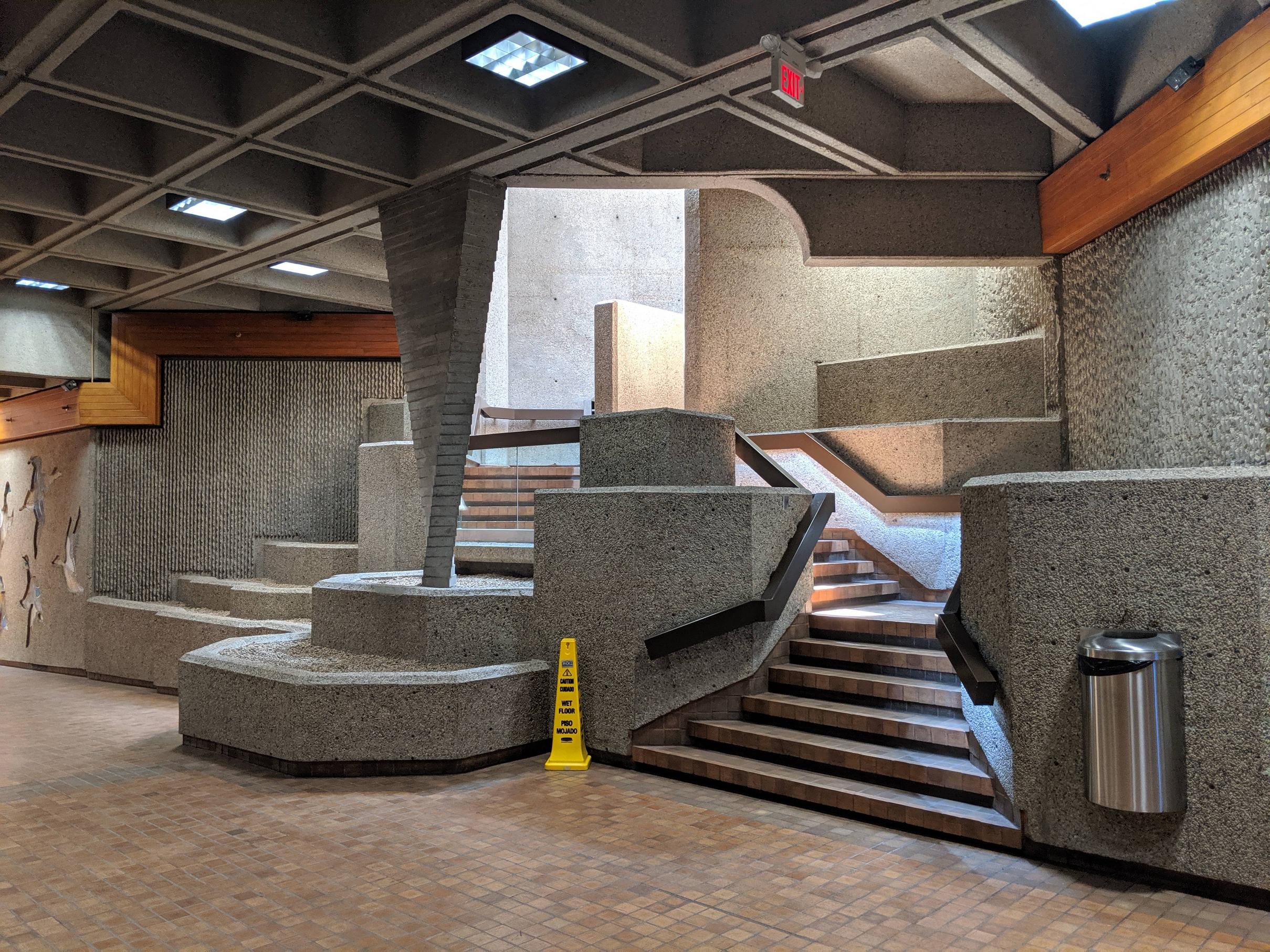 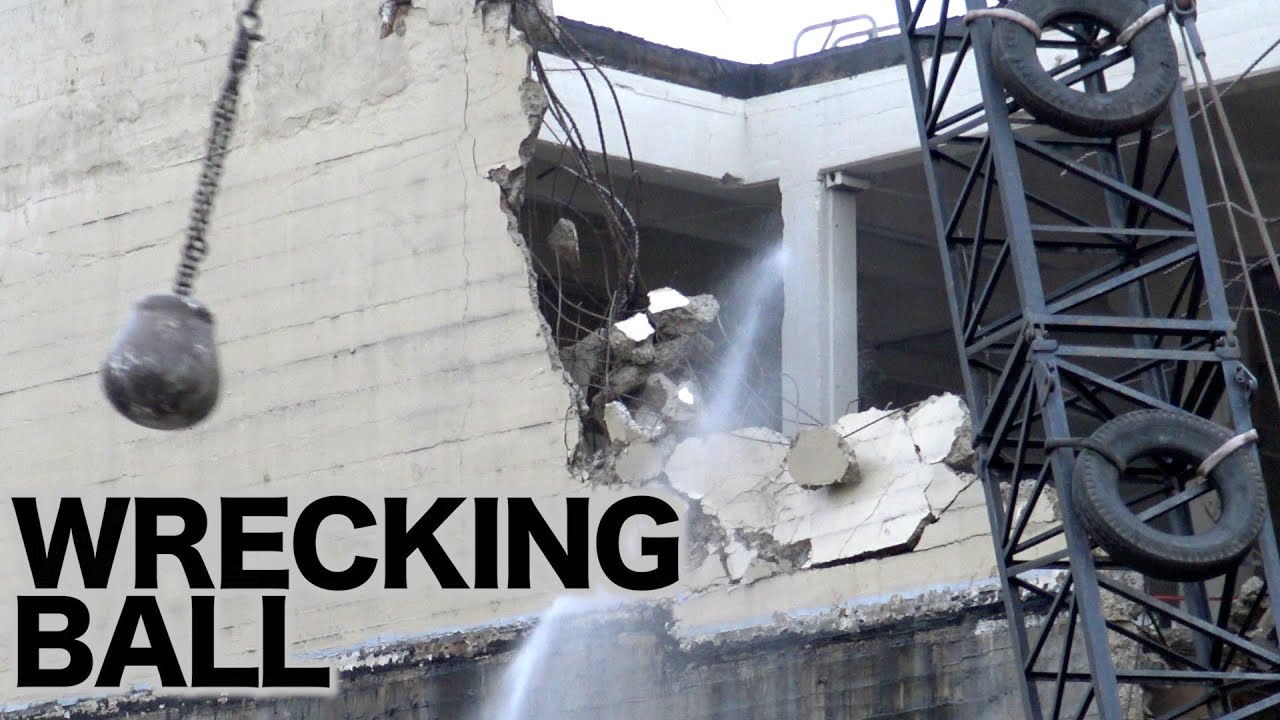 There was a film made a year or two ago called Columbus, which takes place in Columbus, Indiana (the "other Columbus" -- not Columbus, Ohio).  That town is known for its architecture, particularly Brutalist.  The film tries to highlight the spiritual power of the artform.

Oh, and Mike Pence was born in Columbus.

Trailer for the film:

I also hate it, but it's absolutely beautiful for dystopian backgrounds.

Ah, well. Can't get them all. At least your opinion sounds open minded and well thought out.

/\ So sure? This one reminds me of Star Trek a fair bit.

Brutalism as internal design can be hit or miss for me, especially with home design. As a style for communal spaces, it's brilliant though. I remember this video that displayed a house a couple were building, and the outside looks gorgeous, but the monotony of concrete indoors takes away from living and can get incredibly maddening for me without any sort of decoration. But then again, there are brutalist inspired places like these: 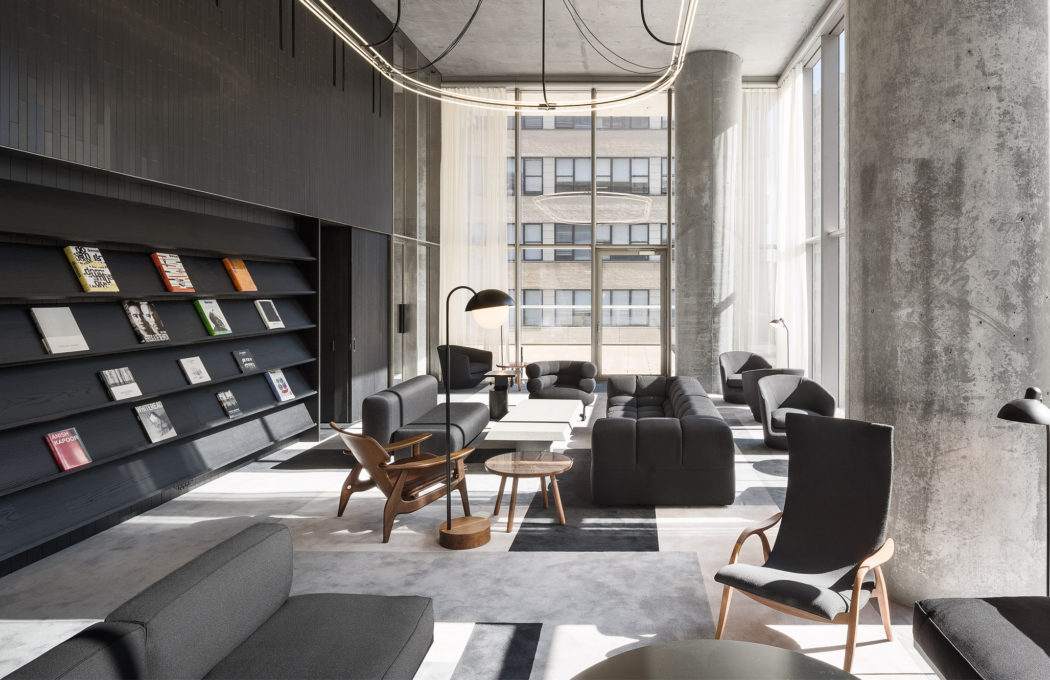 They really make great use of shades and textures to make the place much more welcoming and demands productivity.

There was a film made a year or two ago called Columbus, which takes place in Columbus, Indiana (the "other Columbus" -- not Columbus, Ohio).  That town is known for its architecture, particularly Brutalist.  The film tries to highlight the spiritual power of the artform.

Oh, and Mike Pence was born in Columbus.

Trailer for the film:

That's a really interesting film, but reading more on it, it seems that most of these are modernist buildings.

Well, if it isn't Brutalist, somebody should correct The Guardian:

The one Ero posted is nice and reminds me of other SciFi like Mass Effect (in places), but it does come off as too "opposing" I guess is the word unless it's accented by other features: plants, waterfalls, grass, murals, etc. Otherwise it's bland and even oppressive, which I suppose is why it's usually tied with totalitarianism. Hell, the example in Outlook's post is even kind of totalitarian given what it's function is: AT&T telecommunication & NSA spying??? Off limits to cameras?

Won't lie, it has a weird almost fatalistic draw to it, and the buildings are functional at least. Personally, I like Art Deco when it comes to retro styles, especially old utopian ones.

No wonder I hated the design of that thing!

/\ the first one reminds me of ww2 tank traps

The last one is actually pretty cool. Bah! What have you guys done to me?! I'm starting to warm up quite a bit to Brutalism, maybe my taste are changing. Something about it is starting to intrigue me... it really lends itself to futurism and I guess the simplicity is appreciated. It has to be done right though, the prison/many apt. window style crap is just insulting.

I can see myself living in a Brutalist house with an inside illuminated waterfall and plants decorating throughout to breath life into the building. Would love to have it accented by wood in some places too. It can just come off as natural & even beautiful. Would love to have those stairs (that & above are a good example of wood accent) & bird mural that @Ero posted above. I'll be sure to have an automated drone defense system & Robodogs just in case @Wjfox decides to try and wreck the place

Some interesting trivia I stumbled across:

Goldfinger, the famous Bond villain was actually named after Ernő Goldfinger: a brutalist/modernist Hungarian Architect. Ian Fleming heard of Goldfinger's ugly buildings and plans to demolish some old cottages to make way for his house, so decided to base a villain on him. 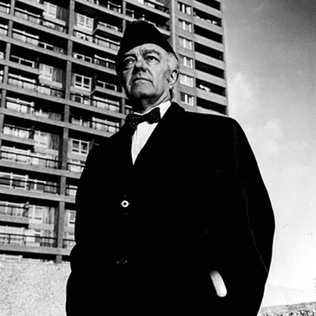 Goldfinger tried to sue when the Goldfinger book was published so Ian Fleming threatened to rename the character "Goldprick".

"Goldfinger was known as a humourless man given to notorious rages. He sometimes fired his assistants if they were inappropriately jocular, and once forcibly ejected two prospective clients for imposing restrictions on his design."

Many people objected to his architectural style which often became eyesores. One of his famous was Trellick Tower in London, which is one of the ugliest buildings I've seen in the UK, but is currently a grade II listed building:

Also tagged with one or more of these keywords: Brutalism, Architecture, Art