Deconstructing the (Not-So-Great) Nonprofit Recession of 2008-2009

(Nonprofit Quarterly) The U.S. economy in 2008 through 2009—at the peak of the Great Recession—as well as during the recession’s immediate aftermath, was a personal financial disaster for millions of Americans. Ten million foreclosures were filed against homeowners in 2008 and 2009 (default notices, scheduled foreclosure auctions, bank repossessions);1 23 percent of private homes slid into negative equity by the third quarter of 2009;2 and the U.S. unemployment rate jumped from 4.7 percent to over 10 percent.3 (These figures are now beginning to pale in the current pandemic context, with some predicting twice that rate of unemployment.) Bank failures, a shrinking economy, and shaken consumer confidence convinced enough members of Congress and a newly elected President Obama to pass a nearly $840 billion stimulus package to jump-start the economy: the American Recovery and Reinvestment Act.4

y far the biggest news story of 2009, the Great Recession inspired no small amount of advice for nonprofits on how to cope with a shrinking economy, such as diversifying funding streams, using compassion when cutting staff, and launching social enterprises. As it turns out, most organizations survived this period. Now, with the benefit of a rearview mirror and big data, we can get an overview of what really happened across the breadth of the sector. Thanks to regularly collected government forms, employment data, and IRS-required financial filings, we are able to review the recent history of the U.S. nonprofit sector in the areas of employment, revenues, and assets, and break it down further by field of activity and geography.

News coverage of the state of the U.S. economy tends to focus on two numbers: the stock market and the unemployment rate. Below, a single chart (Figure 1) tells the barely known story of nonprofit economic resilience: The most striking difference between nonprofits and businesses in 2009 was that nonprofit employers kept their employees.5

For the complete article including footnotes, see link provided above quote box. 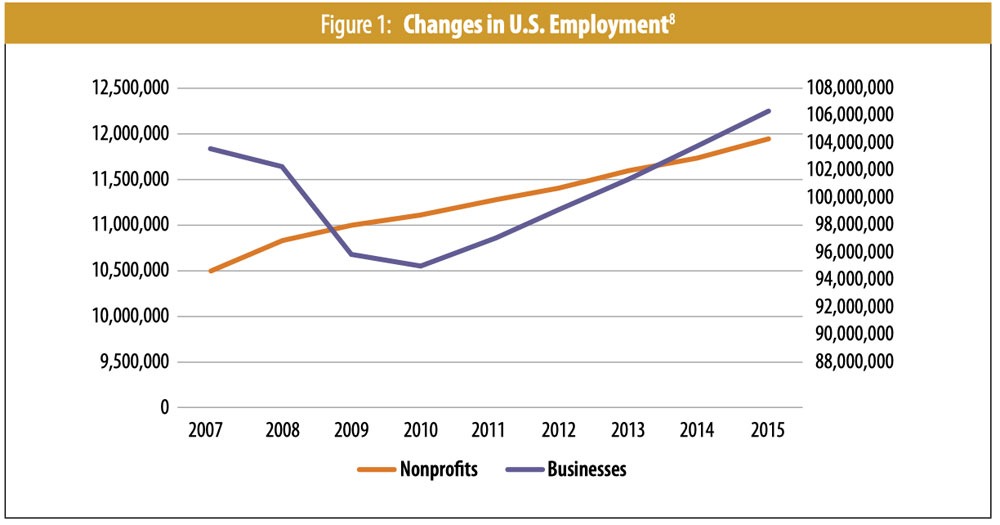 Also tagged with one or more of these keywords: Non-profits, United States, 2008-2009 Recession