Computation does not equal intelligence

What I think will happen with BCI data -- like from Kernel or from Neuralink or other companies -- is that they could have a person go into a dark room, and wear a BCI helmet or just use the device implanted in their brain (in the case of Neuralink), and would watch videos, lying down in a comfortable chair, and told, "Try not to move, and just watch the videos."  Maybe an eye-tracker could also be added, to keep track of where on the screen they are looking.

The scientists running the project would have a high temporal and spatial resolution scan of the person's brain as they watch.  Using Deep Learning, they would build a neural net model that predicts brain responses, given previous brain responses and given the previous frames of video (and maybe also eye-track data).

Once this model is built, they could "show" it some additional videos, and it would generate abstract synthetic brain states that closely match what you would see in the brain of an actual human.  Some of these brain states, for instance, might correspond to seeing an error of some kind.  This would be useful for monitoring robots -- if some robots make a wrong move, it could be caught and corrected; and the robot could be improved to not make the error again.  It could, for instance, make home robots a possibility.  If you trained the "brain" on audio data, you could use it to improve virtual assistants, making them a lot more human-like and less brittle.

But... it could also be used to augment a police state:  you could use the abstract, synthetic brain to look for criminality 24/7; and you could duplicate it thousands of times -- eyes everywhere, watching everybody.

You could have the brains read over people's emails, listen to their phone calls, looking for any sign of criminality.

Oh, and there is vast and sweeping automation potential, if you can drastically improve the robustness of robots, to where they can work in a wide variety of environments, and can do much more general tasks.

But... it could also be used to augment a police state:  you could use the abstract, synthetic brain to look for criminality 24/7; and you could duplicate it thousands of times -- eyes everywhere, watching everybody.

Yeah, no kidding. Reading this—

is that they could have a person go into a dark room, and wear a BCI helmet or just use the device implanted in their brain (in the case of Neuralink), and would watch videos, lying down in a comfortable chair, and told, "Try not to move, and just watch the videos."  Maybe an eye-tracker could also be added, to keep track of where on the screen they are looking.

—unfortunately only brought this to mind (no pun intended): 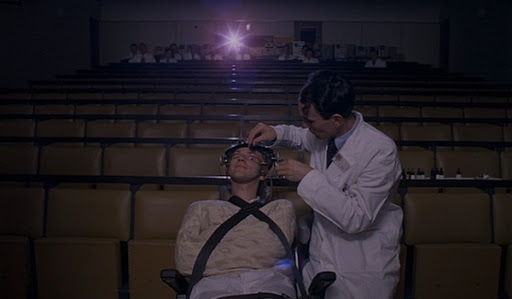 Here is a talk by Steve Omohundro,

who I think many people who have kept up with futurist writing will know well:


The talk is actually more a conversation with people at Numenta -- Jeff Hawkins et al.

It's a very interesting talk, and gives a good introduction to how Transformer neural net models work, how they are trained, their general character, and so on.  He also gives an introduction to language models, and GPT-3.

But one of the most interesting parts of this talk (34 minutes in), recorded July 1, 2020, several days after I wrote this

is where he discusses his shift in thinking, towards realizing that large language models can learn an awful lot about the world, just through non-interactive text-prediction; in fact, can build up a good model of the world.

(If you want to skip to that part of his talk, here is a direct link: YouTube video )

He also mentions a contrary opinion on this by some NLP researchers (the same ones that appeared in that twitter thread I linked-to earlier).  However, some of what they wrote in their paper has already been falsified using GPT-3 (falsified by Gwern).

Omohundro also mentions some really interesting things that would be worth trying out.  One of these is whether one could map internal representations of language models to ones in image or video-understanding models without any parallel corpora to map one to the other.  He refers to how translation is possible between languages without even needing parallel corpora.

Though, I should point out, regarding what Omohundro says, and also adding to what I wrote earlier in this thread:  what enables one to derive meaningful deductions about the world is not that the world is structured, and therefore amenable to statistical analysis.  It's that's the human brain is well-structured... and since text is generated by humans, an imprint of that structure gets projected into text, and can be deduced by statistical methods.  That is what enables, for example, one to deduce the longitude and latitude of cities from textual correlations that Omohundro mentions (he cites Gwern, who I think probably got it from me; but I got it from a long list of other researchers).

Going further, let me make a provocative claim, which will seem hard to believe, and then I'll try to back it up:  probably fairly generic (recurrent) neural net architectures trained with Deep Learning (stochastic gradient descent) will almost always converge to AGI or AGI-like performance when trained on a sufficient amount of certain types of human-generated data -- text, BCI + behavior data (audio stream), home movies, etc.  There isn't much special about the networks or the learning algorithm.  The speicalness is in the data.  However, if you stray too much away from human-generated data, it probably won't work.

My argument for it:  first, I think there is a theorem one can prove, that says something roughly like the following:  there are certain large classes of neural nets (e.g. MLPs of certain types), such that for density 1 of weight initializations (using standard sampling distributions), there exists a curriculum so that if you train the network with the initializaton on that dataset (and schedule), it will converge with high probability not just to a network that approximates some target function, but even very closely approximates a network with certain target weights.

There are results in the literature heading in this direction, such as this:

If what I say is true, then it would show, among other things, that you could achieve AGI using some pretty dumb neural architectures and plain old SGD (=stochastic graident descent backpropagation), if you just had the magic dataset to work with.  And you wouldn't have to be clever at all about choosing the right initialization or other network parameters.

This "data-centric" approach to thinking about how to get to AGI is not something people focus on. Most researchers are "algorithm-centric" in their thinking.  (Perhaps partly for historical reasons, as that is how the field of AI got started; and partly because respectable science is about "explanations", and that is mostly to be found in the algorithm-centric side.)

Now, what is it about human data that matters?  Human data is generated by a neural net of some kind -- the human brain.  It's not the same kind as in artificial neural nets, but brains have certain "hierarchical" and "network" properties shared by deep neural nets; so there are a lot of similarities, when considered at this abstract level.  Training a deep neural net on data generated by another deep neural net often just works to clone the functioning; and, in the case of the above paper I linked-to, it even recovers the exact weights on certain types of networks.  And probably that will work -- on some level -- if that other neural network is a biological one.

Some types of human data -- like BCI + behavior data -- are going to be a lot more efficient to learn than others (like raw text).  But, in the end, most types of human-generated data will inexorably lead to human-like deep neural networks, such that if you probe their internal weights, the patterns you will see will resemble those seen in the human brain -- using brain recordings.  They will be only about a linear transformation away from the features you see in the brain.

This has been borne out in, for example, in this recent paper out of MIT for language models:

So, for example, what I think will happen if you train a network on even more raw text than was used to build GPT-3 is that its outputs will be even more human-like, and its internal representations will look even more like the brain, predicting to even higher degrees of accuracy even larger regions of the cortex.

People will say things like, "But what about open world or closed world assumptions? What about causality?  What about the No Free Lunch theorem?  What about embodiment, grounding, and communicative intent?"  None of those concerns will matter if you can imitate the brain.  They're cool intellectual excursions, but once you've got the brain, you're done!