154 replies to this topic

Uluru climbing ban: Tourists scale sacred rock for final time
Huge crowds scrambled up Australia's Uluru for the final time on Friday, ahead of a ban on climbing the sacred rock.
The giant monolith - once better known to visitors as Ayers Rock - will be permanently off limits from Saturday.
Uluru is sacred to its indigenous custodians, the Anangu people, who have long implored tourists not to climb.
Only 16% of visitors went up in 2017 - when the ban was announced - but the climb has been packed in recent weeks.
The final climbers faced a delayed start due to dangerously strong winds - one of many reasons Uluru has been closed to people wishing to reach the top over the years.
The walk can be hazardous, with dozens dying since the 1950s. The high temperatures in the area, which can reach 47C (116F) in the summer, mean visitors have died of dehydration and other heat-related events.
https://www.bbc.co.u...tralia-50151344 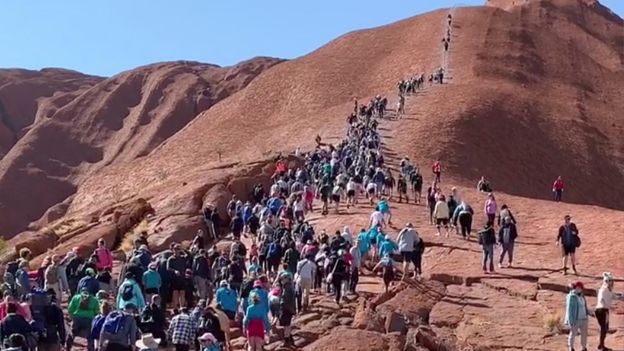 'The worst is ahead': NSW faces multiple bushfire emergencies

(The Sydney Morning Herald) Nearly 100 fires blackened parts of the Mid North Coast, scorched the outskirts of Sydney and destroyed properties from the Hunter Valley to Tenterfield as the state faced the worst fire conditions that seasoned firefighters had ever seen.

But the worst fears of firefighters appeared not to have been realised late on Tuesday, with no lives lost and fewer properties burned than might have been expected on a day when temperatures rose well above 35 degrees and winds reached 80km/h. Most of the 178 properties lost to fires were burnt last week.

People in Sydney woke up to a city shrouded in smoke on Tuesday, as scores of bushfires rage across the region.

On social media, locals have described hazy skies and the stench of smoke in their homes.

About five million people live in the state capital of New South Wales, which has been affected for weeks by fires.

Six people have died in bushfires in the state's north since October. 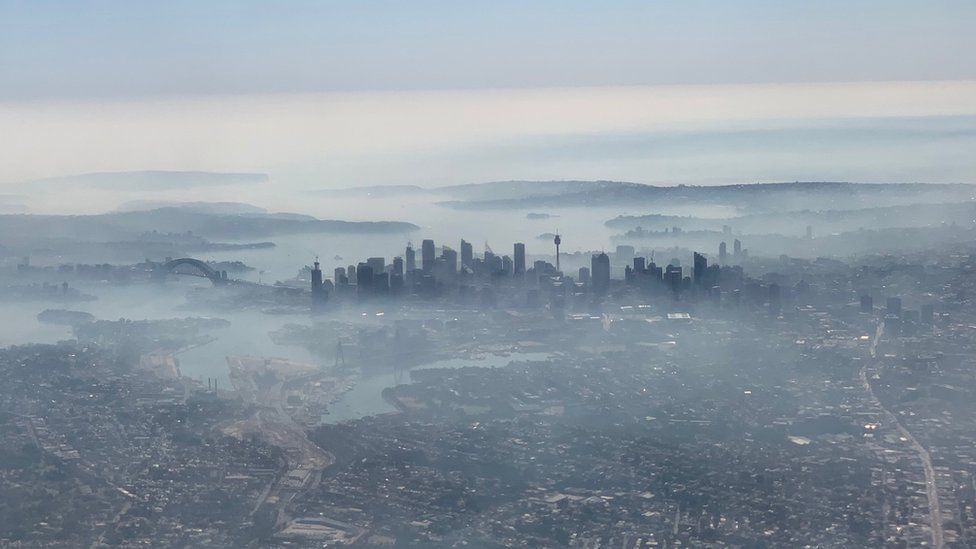 I never know whether to laugh or cry with these girls' videos. They are brilliant, anyway.

State of emergency: the bushfires raging across Australia – in pictures

More than 200 fires raged across five states this week as a heatwave engulfing the country pushed temperatures in the south into the mid-40s. Sydney has again been blanketed in bushfire smoke, triggering protests outside prime minister Scott Morrison’s Sydney residence 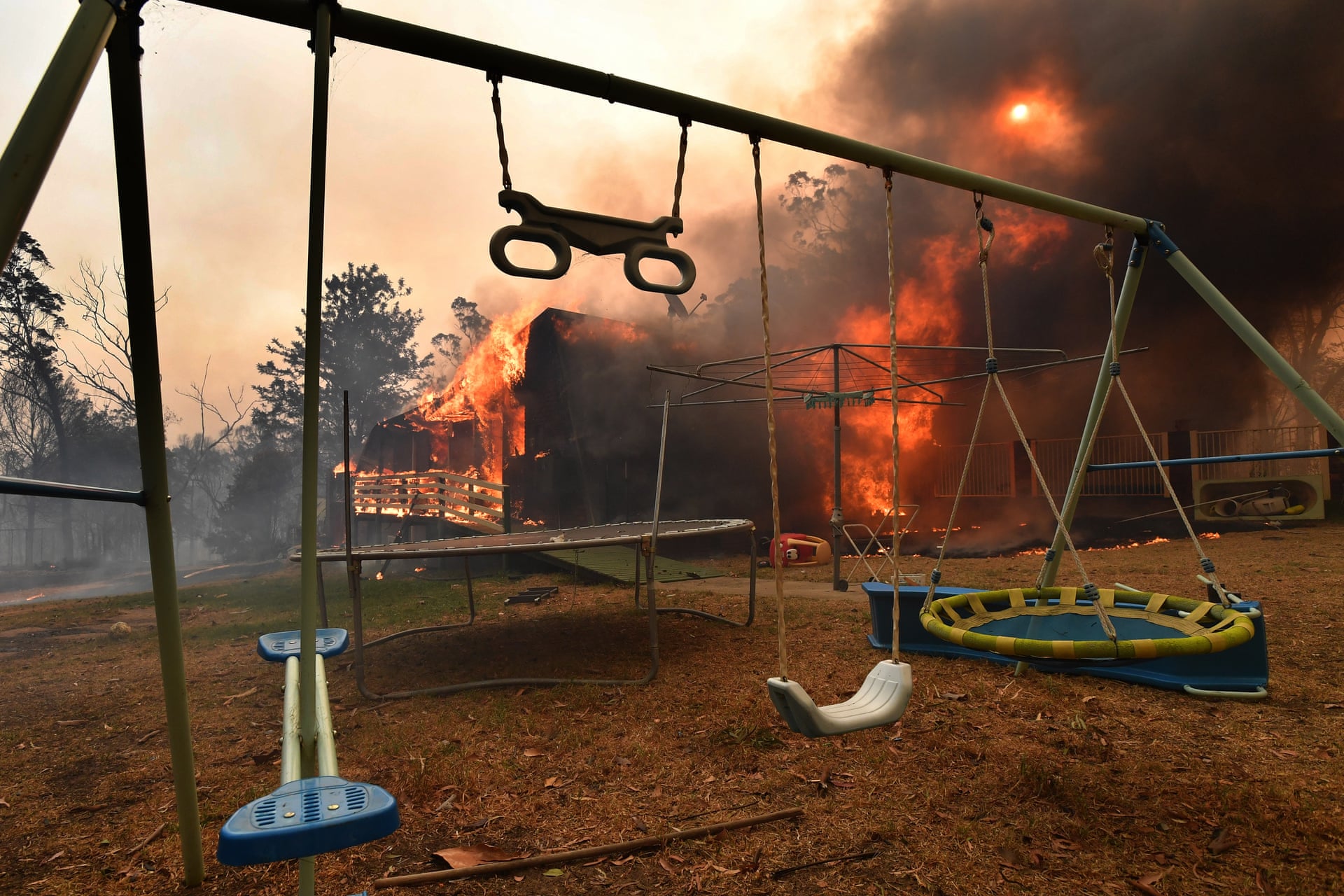 Australia is engulfed in flames.

Scott Morrison has signalled the Australian government will not increase its efforts to combat climate change despite an extended bushfire crisis and a record-breaking heatwave.

Returning to work on Sunday after a controversial family holiday in Hawaii, the Australian prime minister apologised for his absence on top of the mea culpa he offered on Friday while still overseas.

At a press conference after a visit to the New South Wales Rural Fire Service headquarters in Sydney, Morrison called on Australians to “be kind to each other” and reject division – but then accused those who want more action against global heating of political point-scoring. 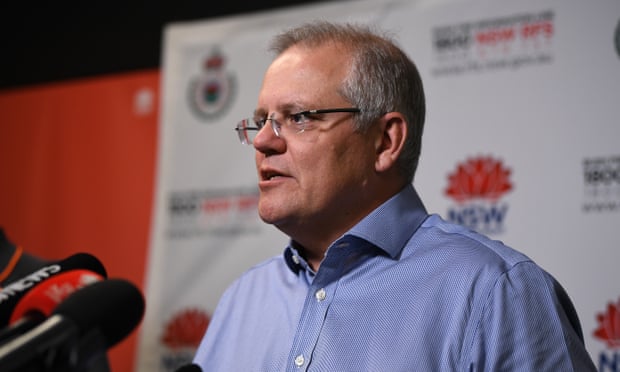 Thieves stole roughly 80,000 gallons of water in a region of Australia that’s suffering from one of the worst droughts in the history of the country. And with record-breaking heat and bushfires getting even larger, it feels like Australia is living in the future. That future, unfortunately, looks a lot like Mad Max.

Police in New South Wales, Australia’s most populous state, report that a farmer in the small town of Evans Plain had about 80,000 gallons of water (300,000 liters) stolen from his property, according to the Australian newspaper. The farmer only noticed the theft from two enormous storage tanks on Sunday, though it could have happened at anytime between December 9 and December 15, according to authorities.

I'm beginning to think Australians are even dumber than Americans and Brits.

I guess the country will be uninhabitable in a few decades.

A Chinese-owned company has been granted approval to run a 96m litre a year commercial water mining operation in severely drought-hit southern Queensland, where locals are on water rations and communities at imminent risk of running dry.

The following day the council implemented extreme water restrictions for residents at the nearby towns of Warwick and Stanthorpe, limiting residents to 80L a day.

Stanthorpe is expected to run out of drinking water within weeks.

Neighbours of Cherrabah have told Guardian Australia they have not had a reliable water supply at their properties for more than a year, and have been trucking water in on a regular basis. Some cattle properties have removed all their cattle. 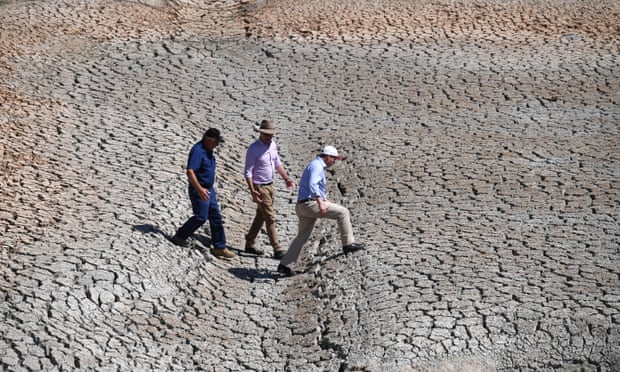 "In record heat Australia and South Australia, where temperature have risen to 40 degrees, koalas approached cyclists on the road to seek water."

No "normies" in Australia think there is a climate issue or care. A lot of Australians think the Bushfires in calofornia are bad but the ones here are fine.

Apocalyptic scenes, and all we can do is sit and watch our world burn. My friend is at Mallacoota hiding at the beach, and took this earlier today. It’s hard to believe it’s real.  @theheraldsun #VictoriaFires 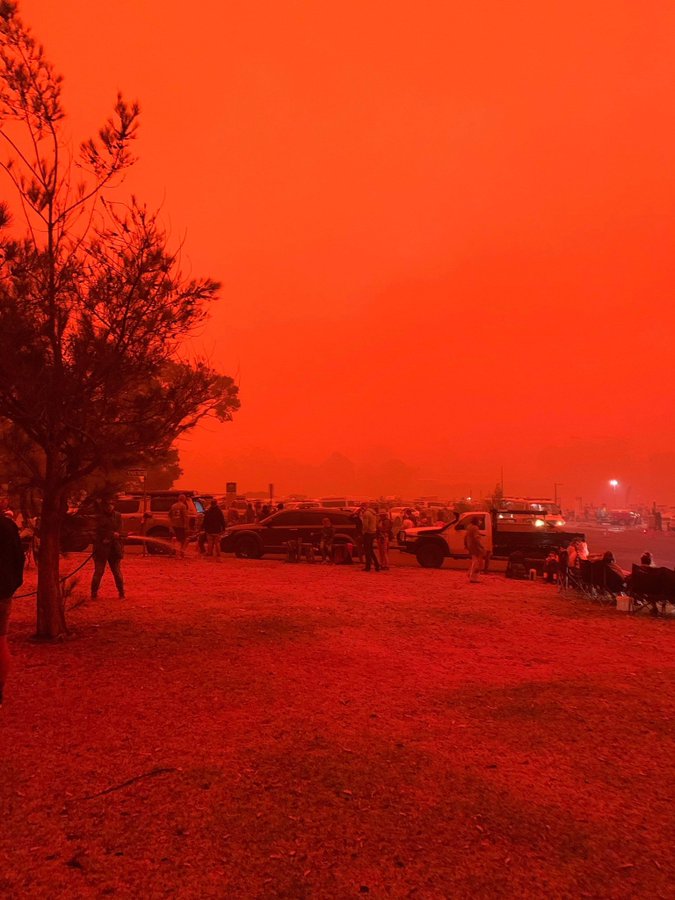 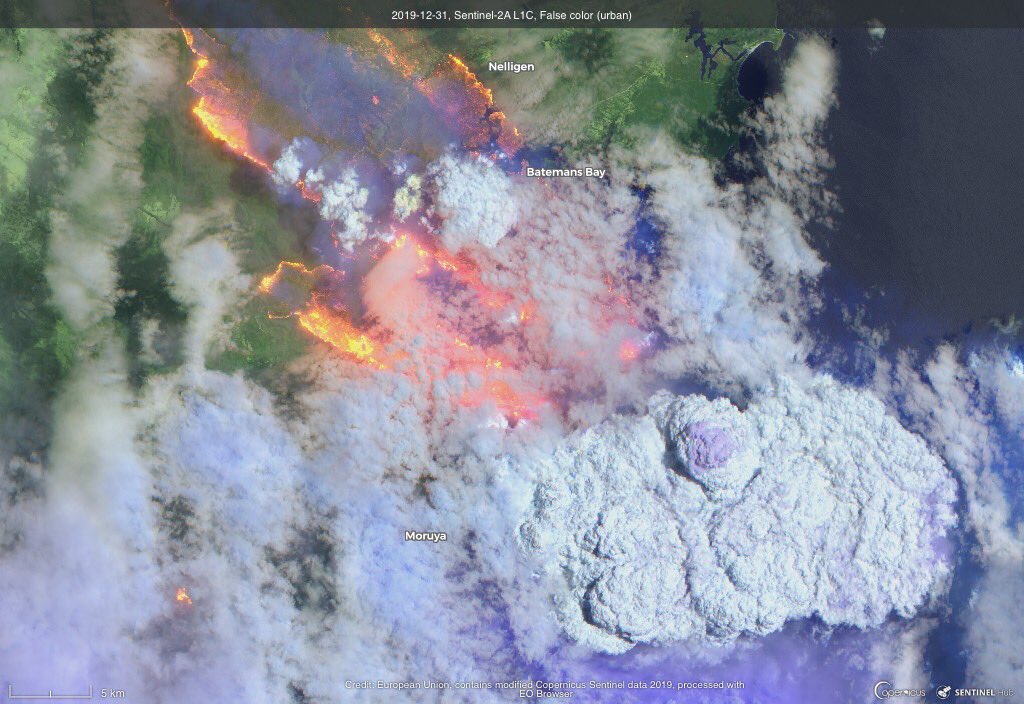 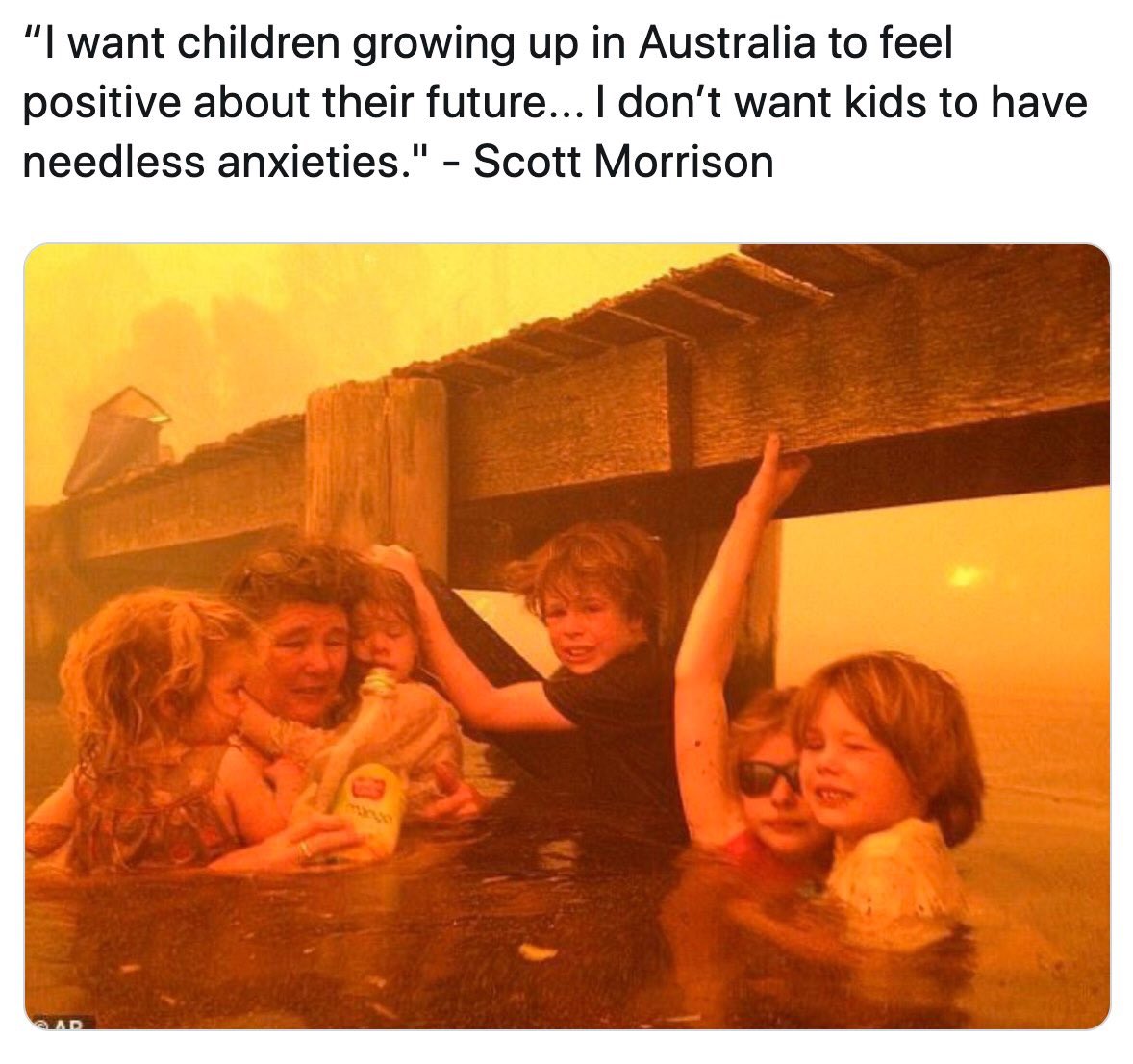 
This is breathtakingly evil. It will be useful evidence in court, if at some point in the future, Nuremberg-style trials are held for Crimes Against Humanity and Nature, so the real architects of this ecocide (i.e. fossil fuel promoters) can face justice. That's assuming society holds together long enough to hold such legal proceedings, and that we somehow make it through this century with civilisation relatively intact, which sadly appears increasingly unlikely.

(Common Dreams) Ecologists at the University of Sydney are estimating that nearly half a billion animals have been killed in Australia's unprecedented and catastrophic wildfires, which have sparked a continent-wide crisis and forced tens of thousands of people to flee their homes in desperation.

News Corp Australia reported Wednesday that "there are real concerns entire species of plants and animals have been wiped out by bushfires following revelations almost 500 million animals have died since the crisis began."

(Common Dreams) Smoke from the continuing, disastrous bushfires ringing Australia has delivered the country's capital Canberra its worst air quality on record—a stark reminder to the government that the crisis is not ending anytime soon.

"This is an exceptional time for Canberra," Australia's acting chief health officer, Dr. Paul Dugdale, told the Guardian, "usually our air quality is among the best in the world."

According to the Guardian:

Dugdale said the smoke was the worst since the 2003 bushfires and was "certainly the worst" since air quality monitoring started in the city 15 years ago.

…But the crisis is unlikely to move the pro-emissions position of Prime Minister Scott Morrison, a supporter of fossil fuels and extractive resources.

According to the New York Times:

As Australia has seen a surge of climate activism in recent months, Mr. Morrison has gone so far as to suggest that the government should outlaw efforts by environmental groups to pressure businesses with rallies and boycotts. Other members of Mr. Morrison's government have answered calls for action with insults; the deputy prime minister called people who care about global warming "raving inner-city lunatics."

Look at the like to dislike ratio on this video below, ABC viewers tend to be progressive yet even on this video there is a lot of dislikes due to the powerful and growing climate change denial apparatus.

Also tagged with one or more of these keywords: Australia, Free speech, Important