Gray Wolves — The Fascists Nobody Wants To Talk About

Gray Wolves — The Fascists Nobody Wants To Talk About

There’s a gigantic, well-organized, extremely violent fascist group with tens of thousands of active members in Germany right now.
And nobody notices.
You’d think all the fascist-hunters would have sniffed it out by now, but it goes right by them as if these guys were invisible.
Which is odd, because this group is not trying to hide, or pretending to be harmless. They’re not shy about it, and it’s not just talk. They have quite a record. They’ve been rampaging for decades, and if anything they’re stronger now than they used to be. They’re closely linked to CIA and Nazi groups; they’re very busy beating, burning, and murdering minorities of all kinds, and boast quite openly about hating literally everyone who’s not a member of their own ethnic group and sect, even suggesting that members go on “hunting expeditions” against minorities which they’d already almost wiped out back in the 20th century.
This group recently held massive, open rallies in the cities of Germany, and it’s only in the last few years that the government has even attempted to ban the public symbols and salutes of this massive fascist group.
There’s something grotesquely comic about this. We have a swarm of fascist-spotters who’ve spent the last few decades waiting for fascism to emerge in Germany when it was marching around, shouting at the top of its lungs, beating minorities, celebrating genocide, and supporting ethnic cleansing right in front of their damn faces.
I’m talking about the Gray Wolves. And I defy anyone to find a more successful, out-front, no-kidding, massive, effective, ruthless fascist organization anywhere in the world. They’re adapting quickly, and even have their own fierce Wiki defenders.
Here are a few highlights from their long, successful career:
In 1978, Gray Wolves started pogroms against Alevi Kurds in Maras (also known as Kahramanmaras) in South-Central Anatolia.
Location is important here. Maras is due north of Aleppo across the Syrian border, NW of Kobane, and above all just up the road from Gazantiep. Gazantiep is a key city for right-wing Turkish nationalists, a city dominated not just by people who are ethnically Turkish but who identify as rightwing Turks of the most intensely nationalist kind. This kind of population lives in a state of siege, glories in that feeling, and is almost always willing to lash out against the sea of minorities they imagine surrounding them. That’s why Gazantiep keeps making the news as a nice convenient safe house for IS and their Turkish allies, some of whom killed 57 Kurds at a wedding in 2016.
It’s important to emphasize that people who are ethnically Turkish are not a bloc. Some of the bravest people on earth, languishing in the Turkish state’s prisons or buried in unmarked graves, are proudly Turkish by ancestry.
And then there are the young men who join the Gray Wolves. Those men are murderous fascists, and it’s cowardice to pretend not to see that.
Violence by these men against minorities has never stopped, but it hit its peak — more like the highest peak in a mountain-range of a graph — in 1978, before the Anglosphere had any handle on sectarian violence in the Middle East.

Seriously, it just came to my attention within the past month that this group is very much active and extremely dangerous. I still think the Hindutva movement's more terrifying just because of India's position, but it's not at all lovely to think that Turkey's ascendancy is coming with a not-too-veiled rise of actual fascism. Especially considering they're so brazen as to hunt for Armenians to harass in foreign countries.

Part of me wonders if the reason why we don't hear more about them is because Turks are considered a minority, a non-white group, and therefore it's politically dangerous to speak against one of their nationalist groups out of fear of being called racist. However, this makes little sense to the other side because loads of otherwise very PC people are very well aware of a certain Turkish atrocity a century ago and most people who would be willing to defend Turks on an intersectional basis are all too aware of Erdogan and his agenda as well.  I think they care more about making sure not all Turks are brushed with the "neo-fascist Islamist" label. That can't be it entirely. 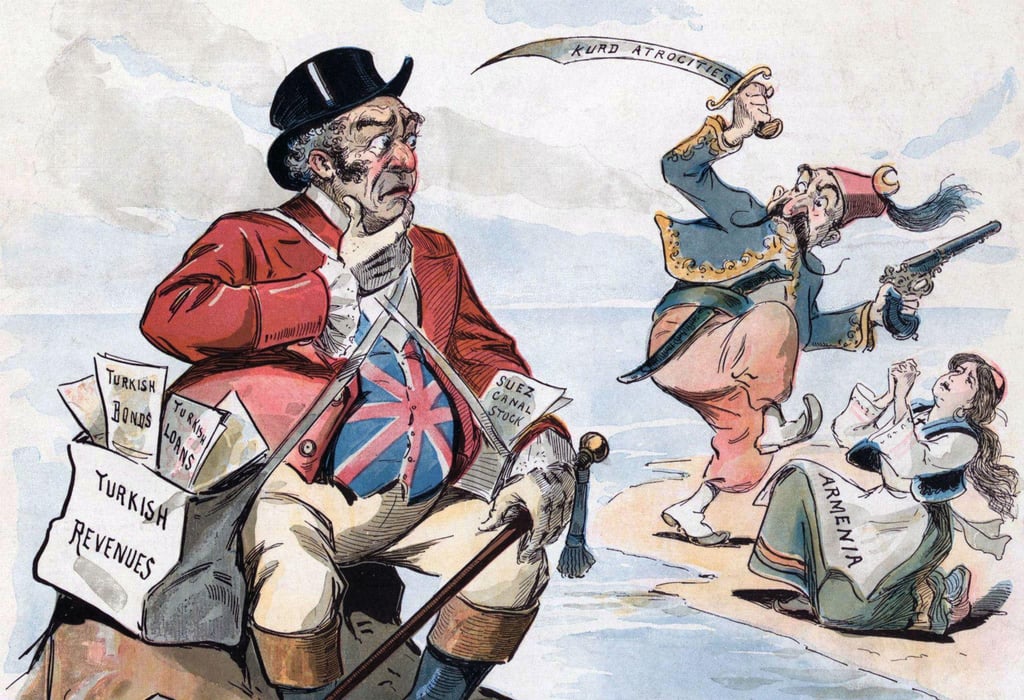 I mean of course this group is extremely dangerous. They are viewed as a terror organization in a lot of circles. One of their most infamous acts was the Bangkok bombing in 2015 which killed 20 people, I feel like this was discussed somewhere on this forum before. But can't remember where. Either way these guys have been on my radar for a long time...

France is also moving to ban this group... and they may or may not be involved or influencing an ethnic Turkish party in the Netherlands (DENK) which basically exists to do Ankara's bidding... hopefully the Netherlands moves to get rid of them in the next election... these kinds of ethno-focused parties shouldn't exist in Western democracies and it is embarrassing they have been allowed to get this far...

Turkish ultra-nationalists in Germany and Austria

Their symbol: the gray wolf. Their name: Ülkücü, Turkish for idealist. Their leader: Alparslan Türkes. Their goal: a Turkish empire and the elimination of political opponents.

They are no longer only organized in Turkey, there are also at least 20,000 Turkish ultra-nationalists in Germany and around 5.000 in Austria, but the numbers of supporters is on the rise. Disguised in harmless-sounding club structures, they have been undermining German and Austrian party politics for years – almost unnoticed by the public. Youth institutions that offer perspectives with Koran lessons and combat training take care of the youngsters. They promote a radical youth where borders blur: Some young wolves from Europe even moved to Syria as „God’s warriors”.[1]

Alparslan Türkes and his ideology

He is considered impulsive, tends towards radical simplifications and dreams of a Turkish empire. This is how his followers describe their “Basbug”, their self-proclaimed “leader” – Alparslan Türkes.

Born in Cyprus in 1917, the 16-year-old emigrated to Turkey with his parents in 1933. A steep career followed there: Türkes decided to begin an officer career and succeeded early. The young officer becomes an enthusiastic Nazi supporter. His sympathies for its ideology even put him in custody several times during the Second World War – nevertheless he became a colonel in the general staff.

In 1964, Alparslan Türkes became general inspector of the “Republican Peasant and National Party” (CKMP) – enough influence to fill high party bodies with his supporters. He disempowers other minded CKMP members.

On August 2, 1969, he took over the party chairmanship. His first acts: a new party constitution, in which his rights as party leader are expanded together with a new name: “Party of the National Movement”, MHP for short.

The gray wolf becomes a symbol of the movement, based on a myth: According to legend, a wolf in pre-Islamic times led and saved the endangered Turkish tribes from the Altay Mountains in Central Asia. The gray wolf is considered a powerful hunter that roams the country freely and independently. Since he lives from hunting, he will never recognize others as free and independent. The movement of the Gray Wolves follows this picture: All non-Turkish sections of the population, especially minorities in their own country, are “racially” persecuted. Propaganda is being used against leftists, socialists and communists. The declared goal of the movement is the establishment of a Pan-turanian nation that stretches from the Balkans through Central Asia to China and unites all so-called “Turkic peoples” in a “Greater Turkic empire”. The mythical wolf is the leader of his pack. That is why Alparslan Türkes likes to call himself an “upper wolf”. Türkes dies in 1997.

Its symbol, the gray wolf, is still used as a sign of distinction today: followers greet the world with the wolf salute. In addition, the howling wolf, along with the Ottoman war flag with the three crescents, is a popular flag motif on the scene. Officially, Turkish followers call themselves Ülkücüs, idealists, unofficially they are the Gray Wolves. 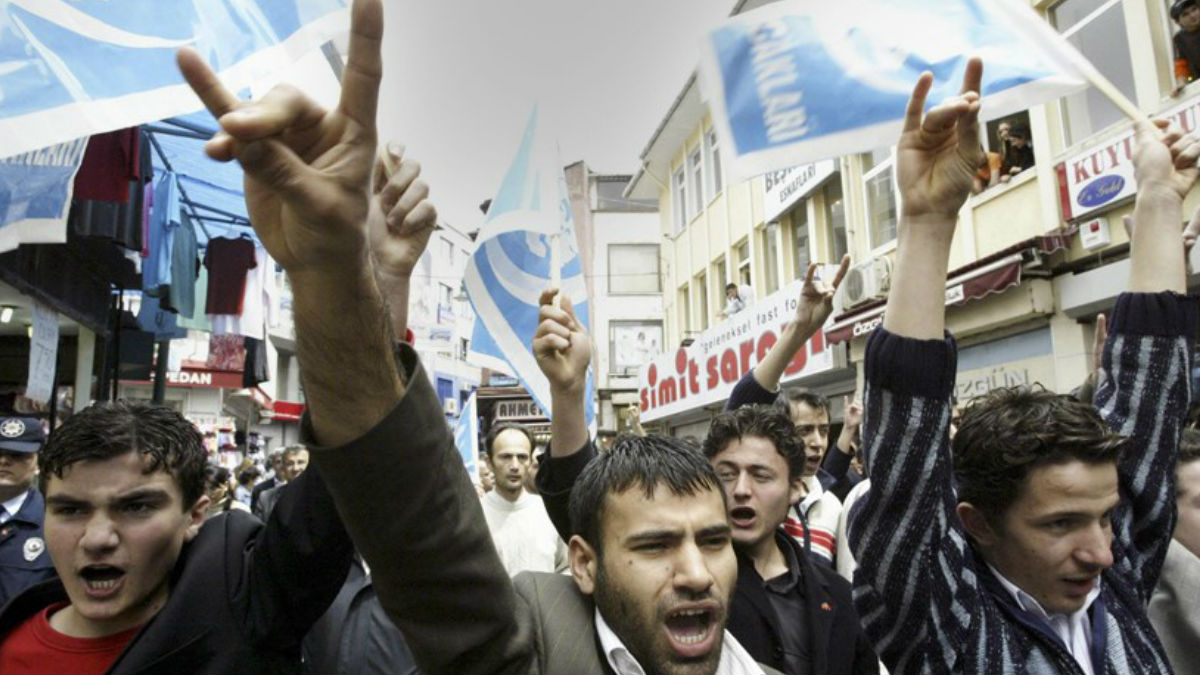 I mean of course this group is extremely dangerous. They are viewed as a terror organization in a lot of circles. One of their most infamous acts was the Bangkok bombing in 2015 which killed 20 people, I feel like this was discussed somewhere on this forum before. But can't remember where.

There was one small thread about it. Probably more discussion elsewhere.