Can new technology save fish?

A technological revolution is needed for Europe to end the controversial practice of discarding fish, according to the EU’s fisheries commissioner.

Maria Damanaki is calling for boats to be fitted with smart nets to filter out fish which would later be discarded as too small or above quota and she wants more on-board cameras to ensure that crews cannot cheat on fishing rules.

She told BBC News that the hoped-for reform of the Common Fisheries Policy could not happen unless fishermen harnessed new technology.

Spy-in-the-wheelhouse CCTV cameras trialled in the UK are said to have cut cod discards from 38% to just 0.2%.

Fishermen on the trial are obliged to land all the cod they catch, whatever the size. They have been rewarded with increased quotas and permitted extra days at sea.

Ms Damanaki says cameras will be essential – especially for the biggest boats – if the EU adopts a policy of zero fish discards.

The other key technology is fishing net design, which Ms Damanaki says is the single most important component of fisheries reform.

At the North Sea Centre in the Danish port of Hirtshals, fishery technologists are testing new styles of nets which may answer her prayer.

One innovation is a slanting plastic grid at the centre of a trawl net. Large fish are diverted by the grid into the keep end of the net whilst young fish and shrimps pass through the slots. The grid is bendable so it can be wound up with fishing gear. 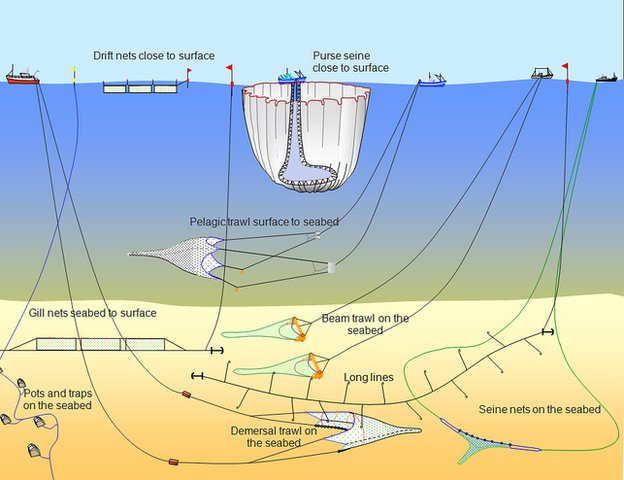 Quite a lot of new designs for new fishing nets, (Move if needed)

It's not the same thing, but I recently bought some lobster meat whose company is working towards a one for one policy. That is releasing one adolescent with high chances of survival for every mature lobster caught.

I always liked this idea. Planting one tree for every tree cut down sort of thinking.

and the sustainability class on coursera I took mentioned a system of giving shares of fish stocks to fishers. That way they have a vested intrest in increasing the wild populations and preventing overfishing. It has shown some success.

hahahahaha... In that case, does this mean we should be eating fish from now on? lol

Custom Business Essay | Whenever you find yourself on the side of the majority, it is time to pause and reflect.