251 replies to this topic

I saw Knives Out:

I didn't realize Christopher Plummer was still acting. He's about 90 years old! Don Johnson is also in it, and is about 70 now. And Jamie Lee Curtis, Daniel Craig, and Chris Evans, to name a few.

Daniel Craig did a good job mimicking a dignified Southern gentleman accent. He's a very versatile actor. I remember how people thought he would do a terrible job as 007 several years ago, and were impressed with his version of James Bond.

The film itself kind of defies genres. It's mystery drama, but also somewhat of a comedy. I was trying to think of what to compare it to, and then it hit me! -- it's like a James Bond film, but without the explosions and impossible getaways. So, having Daniel Craig in the film makes sense. That cool-as-a-cucumber Southern private detective he plays is isomorphic to James Bond.

I saw Ad Astra last night and disliked it. From a science/tech standpoint, it is a nonsensical depiction of the future and has a ton of inconsistencies.

Also, Brad Pitt was unsuited for his role--the man is too cheerful by nature to convincingly play a tormented, introverted person.

Tommy Lee Jones was also disappointing since he was a one-dimensional character who simply went crazy/turned evil (never fully explained).

[...] On review aggregator website Rotten Tomatoes, the film holds an approval rating of 17% based on 89 reviews, with a weighted average of 3.66/10. On Metacritic, the film has a weighted average score of 31 out of 100, based on 35 critics, indicating "generally unfavorable reviews".
Peter Debruge of Variety called the film "one of those once-in-a-blue-moon embarrassments that mars the résumés of great actors (poor Idris Elba, already scarred enough as the villainous Macavity) and trips up the careers of promising newcomers (like ballerina Francesca Hayward, whose wide-eyed, mouth-agape Victoria displays one expression for the entire movie)," panning the direction and effects.[63] David Rooney of The Hollywood Reporter felt that the film was, "hobbled by a major misjudgment in its central visual concept" lamenting its execution (such as the poor proportions of the 'cats' to their environments) and deeming the film "exhausting".[64]
In the Los Angeles Times, Justin Chang wrote that "With its grotesque design choices and busy, metronomic editing, Cats is as uneasy on the eyes as a Hollywood spectacle can be, tumbling into an uncanny valley between mangy realism and dystopian artifice."[65] Peter Bradshaw for The Guardian wrote a one-star review that criticised the visual style and particularly the character design.

Oh. I thought it'd be one of those films that were just artsy. It'd get at least a 60% or 70%, with most audience members either loving or hating it. The art choice would be polarizing and the story would be average, and we'd just move on. But this just makes me feel bad. Why.

I heard that Cats was so bad people should actually see it to gawk at its true awfulness, kind of like Battlefield Earth.

That being said, you should probably wait until there are ways to see it that don't require you plunking down $15 for a theater ticket. 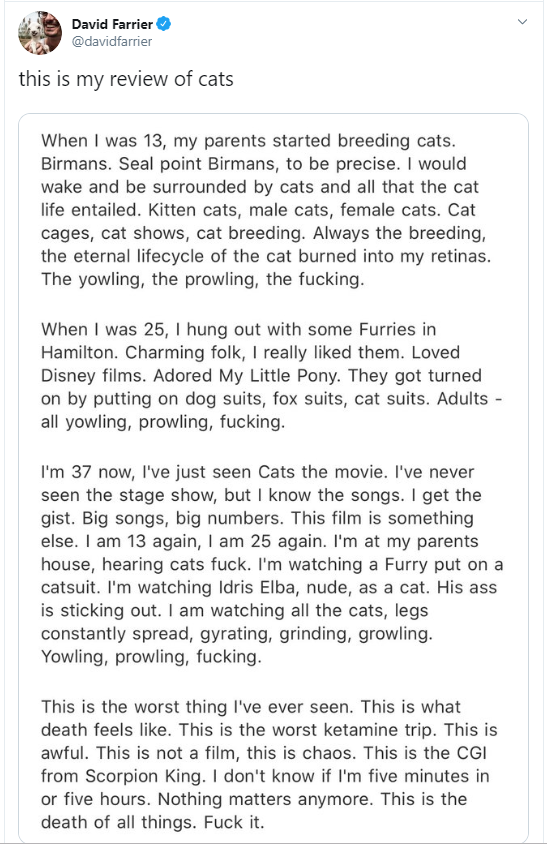 Scratch that: Cats film to be 'resupplied' with 'improved visuals'
Mon 23 Dec 2019 12.51 GMT
A new version of Tom Hooper’s film adaptation of the musical Cats with “improved visuals” is reportedly being sent to cinemas after a barrage of negative reviews in which the film was hammered for its “disturbing” CGI effects.
On Sunday, the Hollywood Reporter said it had seen a note that was sent by Universal Studios to thousands of cinemas in the US confirming that a new version with “some improved visual effects” was being distributed to chains.
Phil Clapp, the chief executive of the UK Cinema Association – the national trade body for cinema operators in Britain – said he understood the decision to “resupply” the film was a worldwide move and that UK cinemas were being notified of this on Monday.
https://www.theguard...mproved-visuals 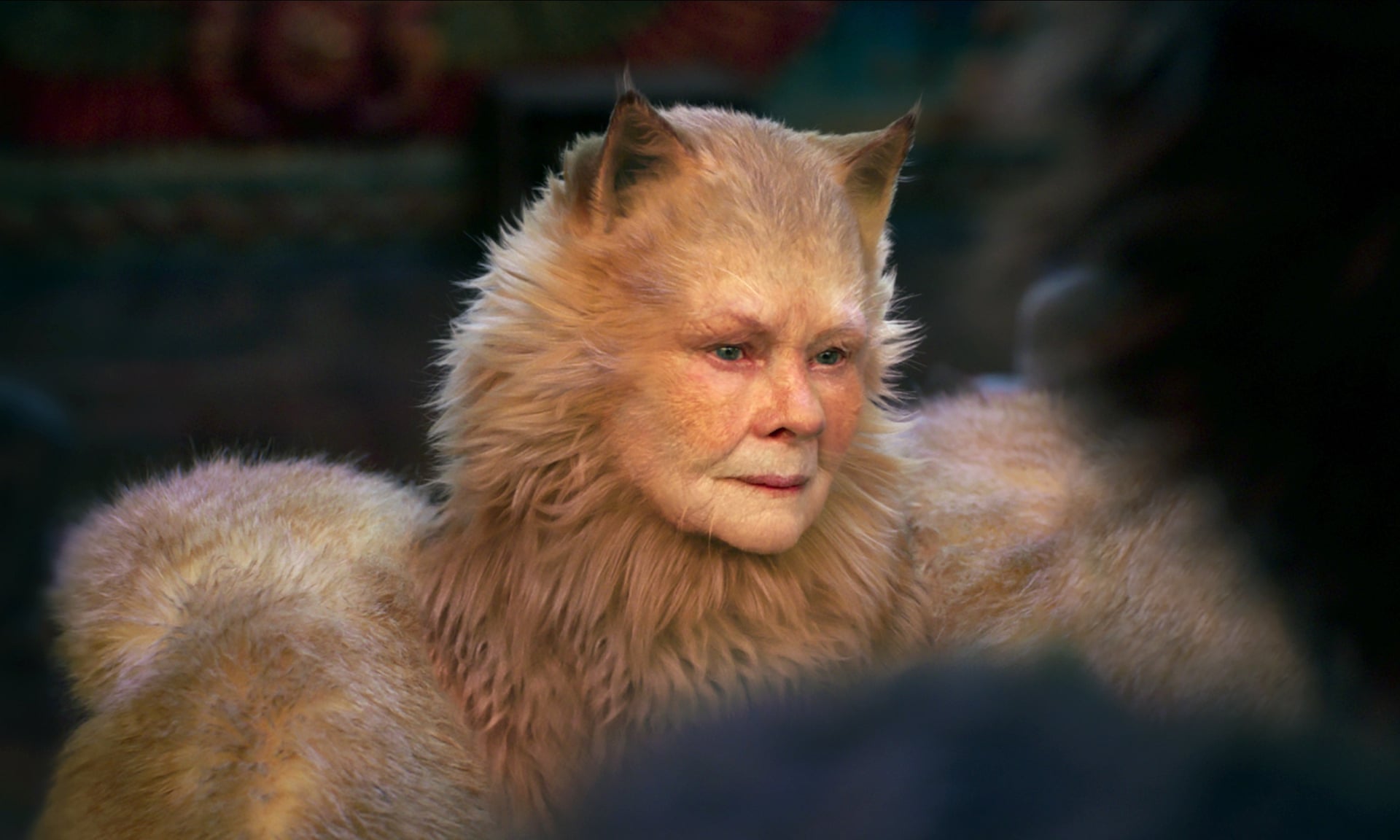 Ah, one of these sorts. No "What Movie You Lasted Watched" here? Anyways, if I see any movies I've watched that I find are worth mentioning, I'll make sure to post them.

Ah, one of these sorts. No "What Movie You Lasted Watched" here?

This is sort of the general "movie" thread nowadays. I bet there might be an older thread with that exact title, but it's probably five or six years old by now.

Ah, one of these sorts. No "What Movie You Lasted Watched" here? Anyways, if I see any movies I've watched that I find are worth mentioning, I'll make sure to post them.

This thread is for anything movie-related, including stuff you've seen.