Is China opening the door to the tiger and leopard skin trade?

Is China opening the door to the tiger and leopard skin trade? 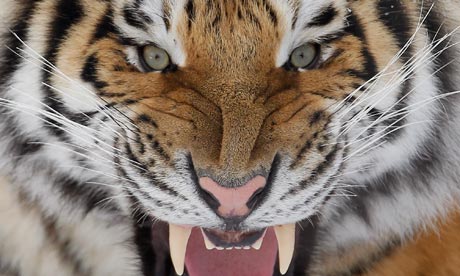 A lack of transparency means it's not clear whether China is allowing the illegal trade in the skins of tiger
and leopard skins. Photograph: Mathieu Belanger/REUTERS


Has China quietly reopened the trade in tiger pelts? The question was posed very publicly on Thursday by the Environmental Investigation Agency, which fears that Beijing may be backtracking on an international pledge to save this critically endangered animal.

In a press release, the conservation group accused the Chinese government of opening up a loophole in the tiger trade ban by allowing commercial breeding centres to register and sell skins.

This is a contentious claim on a crucial subject. China won international kudos for prohibiting the trade in 1993, but it remains the main source of demand for illegal tiger products and is under pressure from commercial breeders to relax controls.

The government has repeatedly re-iterated its commitment to protect the animal and curb illegal sales, most recently at last year's Tiger Summit in St Petersberg.

But it has been far from forthcoming about its efforts to enforce the ban, verify the legality of tiger products and deal with the huge stockpiles of bones and hides that are accumulating in the country's massive tiger farms.

Along with the lack of transparency is a problem of trust and either an unwillingness or an inability to communicate with the outside world, as I learned today when I tried to get the government's response to the Environmental Investigation Agency's accusations.

As is the norm with Chinese government bodies, the press officer at the State Forestry Administration – which oversees tiger conservation - asked for questions in writing to be faxed to his office. When we called to ask when we could expect a response, he admitted that none would ever be forthcoming because senior officials have given up accepting interviews from foreign journalists on wildlife issues because they feel the reporting is too negative.

Putting aside the long-running argument about foreign media coverage of China, this bodes badly for international efforts to save the tiger, which will not work without a higher degree of transparency, accountability and cooperation both within China and across borders.

It is far from certain that China really has re-opened the tiger trade, but the government needs to spell out its position more clearly. Lets hope delegates at next weeks meeting of the United Nations Convention on International Trade in Endangered Species have better luck getting straight answers.

Reading posts like this, I despair for the human race.

I am 100% serious. In an attempt to better understand just how it would look I tried to create one. It's not a great job and the real thing would look much much better, but it gives a flavour of how cool it could potentially be. For those of us who aren't shallow, ignorant and completely uncaring, here are some photos of these magnificent creatures, soon to be gone forever - If we want some in a zoo we can just clone some and store their dna. Technology to do that should all be very easy pretty soon. Anyway, tigers dying out isn't a world destroying event. The fact that there are so few at the moment means if there were none it wouldn't make much different to the environment and other animal populations. The only animals that need to be preserved are the ones that certain human settlements rely on for survival. Also every tiger I make into a coat is one less tiger to turn "man eater!" and hunt Indian children and babies.
Tigers were one of the great predators of their day, unfortunately for them now humans are a much better predator, maybe it's time for them to retire.