195 replies to this topic

What do you guys think of this?

And out of interest, how many of you have actually heard of Bitcoin? I only became aware of it in the last few weeks.

Not a Member of the Tea Party! Just a Concerned Conservative

I read techcrunch daily so I have heard of them, but yea same as you only within the last couple of weeks. The idea of an Electric based currency has been in the back of my mind for some time before i heard of them. The paper dollar is essentially worth nothing anyway and most money these days is electronic transactions of some kind so it makes sense. It's a good concept but it needs a platform and government backing to compete with the dollar and other major currencies.

"Did you really expect some utopian fantasy to rise from the ashes?" Thomas Zarek-- Battlestar Galactica.

Sorry. As good as this sounds, at least in it's current form, economists would ridicule the idea. But maybe they're wrong, that, i don't know. While you get a lot of growth and a decentralised system, you lose stability. This system also does not get rid of inflation, as oppose to what he said. For the implementation, it would be expensive and would require a society to change in a way not observed in history. What about security issues? This system may take power from the banks but it is putting them into the hands of another group, whats not to say the banks will just take control of that group? Economics should be taught in high school, it is invaluable in understanding how the world works. I've heard people say it isn't science, but take it from someone who is about to become a scientist. It is as close as science can get to understanding that topic.

Homeless, Unemployed, and Surviving on Bitcoins

JESSE ANGLE IS homeless, living on the streets of Pensacola, Florida. Sometimes he spends the night at a local church. Other nights, he sleeps behind a building in the heart of the city, underneath a carport that protects him from the rain.
Each morning, he wakes up, grabs some food, and makes his way to Martin Luther King Plaza, a downtown park built where the trolley tracks used to run. He likes this park because his friends hang out there too, and it’s a good place to pick up some spending money. But he doesn’t panhandle. He uses the internet.
The park offers free wireless access, and with his laptop, Angle watches YouTube videos in exchange for bitcoins, the world’s most popular digital currency.

@AsianGuy_LOL, surely when you’re in the right age you’ll either mine bitcoins or gamble with it. Most likely, bitcoiners earn bitcoin through mining, but before engaging in this kind of approach, know first if it’s really for you--http://bitcoindaily....-is-it-for-you/. Anyways, it’s quite surprising how these unemployed are surviving because of bitcoin.

How blockchain can change the future of IoT

The Internet of Things (IoT) is a fast-growing industry destined to transform homes, cities, farms, factories, and practically everything else by making them smart and more efficient. According to Gartner, by 2020, there will be more than 20 billion connected things across the globe, powering a market that will be worth north of $3 trillion.
But the chaotic growth of IoT will introduce several challenges, including identifying, connecting, securing, and managing so many devices. It will be very challenging for the current infrastructure and architecture underlying the Internet and online services to support huge IoT ecosystems of the future.
This is something that can perhaps be solved through blockchain, the distributed ledger technology behind cryptocurrencies such as Bitcoin and Ethereum, which is proving its worth in many other industries, including IoT.
Blockchain will enable IoT ecosystems to break from the traditional broker-based networking paradigm, where devices rely on a central cloud server to identify and authenticate individual devices.
While the centralized model has worked perfectly in the past decades, it will become problematic when the number of network nodes grows into the millions, generating billions of transactions, because it will exponentially increase computational requirements — and by extension the costs.

It still seems like everything crypto currency is just a continuation of everything that is wrong and false with the global financial system, maybe even worse.

Not that it cant work in the future.  Im a bit surprised im the only virtual currency hater on this whole forum.

What Venture Capitalists Got Wrong About Bitcoin

Of the over $1 billion venture capitalists have invested in blockchain businesses, that funding has focused primarily on bitcoin, since for years that seemed like the only option. But with the arrival of Ethereum and a surge of alternate coins and tokens such as Zcash into the market, the landscape is looking very different from what those investors signed up for.
Significant investment in bitcoin startups began in 2013, the year the value of the currency crossed the $1,000 mark before suddenly plummeting. With some wariness, investors returned and put $299 million into bitcoin companies in 2014 and $474 million in 2015.
Mostly, venture funding in this period went toward bitcoin wallet and exchange startups in geographically diverse areas. These companies focused on creating on-ramps and off-ramps for using the currency in jurisdictions where such trades are legally compliant, integrating with banking systems in those locations for more efficient payment pipes.

A LEGAL FRAMEWORK
It looks like things are moving forward for a more secure use of blockchain and cryptocurrency technologies. Just today, the world’s leading players in digital currency have partnered to create the Blockchain Token Securities Law Framework as a form of self-regulation. The partnership includes Coinbase, ConsenSys, Union Square Ventures, and Coin Center.
Blockchain is a system that offers security through transparency. It’s a data structure that uses digital ledgers of transactions shared among a distributed network of computers. It’s used by digital or cryptocurrencies, the most famous of which is Bitcoin and the newcomer Zcash.
Basically, transactions in a blockchain are monitored and kept by people part of a decentralized network, called miners, who store all data in blocks. Digital tokens or cryptocurrencies created on blockchains are called blockchain tokens.
According to ConsenSys, “The ability to widely sell a product or access to a product enables companies to overcome capital crunches and bring worthy products to market.”

Bitcoin headed for its biggest weekly jump since June as rising geopolitical risks boosted demand for alternative assets.
The cryptocurrency surged 15 percent this week to $900.40 as of 2:38 p.m. in Hong Kong, taking its gain this year to 107 percent, data compiled by Bloomberg show. The last time it was at such levels was in January 2014, when bitcoin was tumbling from its record price of $1,137 following the implosion of the MtGox exchange and tightening Chinese controls.
Bitcoin is extending a rally that’s beaten every major currency, stock index and commodity contract in 2016. Buyers sought alternative assets this week amid the killing of Russia’s envoy to Turkey and a separate attack that left 12 people dead in Berlin. Weakening pressure on the yuan, which intensified this month as the U.S. projected a faster pace of tightening next year following Donald Trump’s election win, is also increasing demand for bitcoin in China, where the majority of trading occurs. 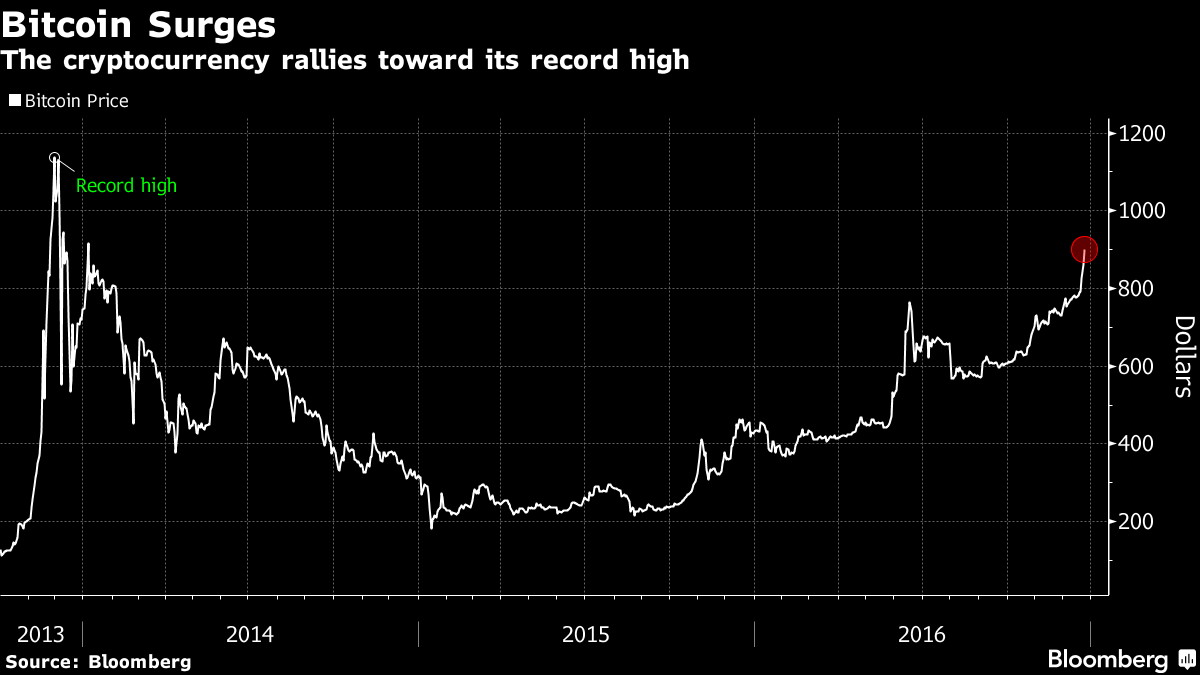 The next time bitcoin slumps and stabilizes I'm moving some money over to it. This currency has jumped like this twice now and shown the ability to stabilize itself like it did in 2015. Not only that but Bitcoin is finally getting real recognition from financial institutions and investors.

Bitcoin Outperformed All Bank-Issued Currencies in 2016

The value of digital currency Bitcoin has crossed the thousand-dollar line for the first time since December 2013. As of this writing, a single Bitcoin is worth $1114.95, growing by 125 percent in 2016 to perform better than all central bank-issued currencies, according to Reuters.
Bitcoins are not controlled by any government or central authority, which makes the cryptocurrency very attractive for those looking to mobilize money without their country’s capital restraints. Reuters reports that the increase in value could be largely due to strong demand from China as a response to the yuan sinking by 7 percent in 2016.
Paul Gordon, co-founder of digital currency investment company Quantave and board member of the UK Digital Currency Association, told Reuters that “the growing war on cash, and capital controls, is making Bitcoin look like a viable, if high risk, alternative.”

Bitcoin Plunges as Much as 23% From Wednesday’s Record High

Bitcoin prices plunged as much as 23 percent from Wednesday’s all-time high, according to Bloomberg data, as some traders took gains and investors celebrated a rally in the yuan.

Bitcoin fell to as low as $888.99 Thursday before inching back to $957.54. The digital currency hit a record $1,161.89 Wednesday, according to Bloomberg data, thanks to continued adoption in China and other parts of the world where traditional currencies are tightly controlled. 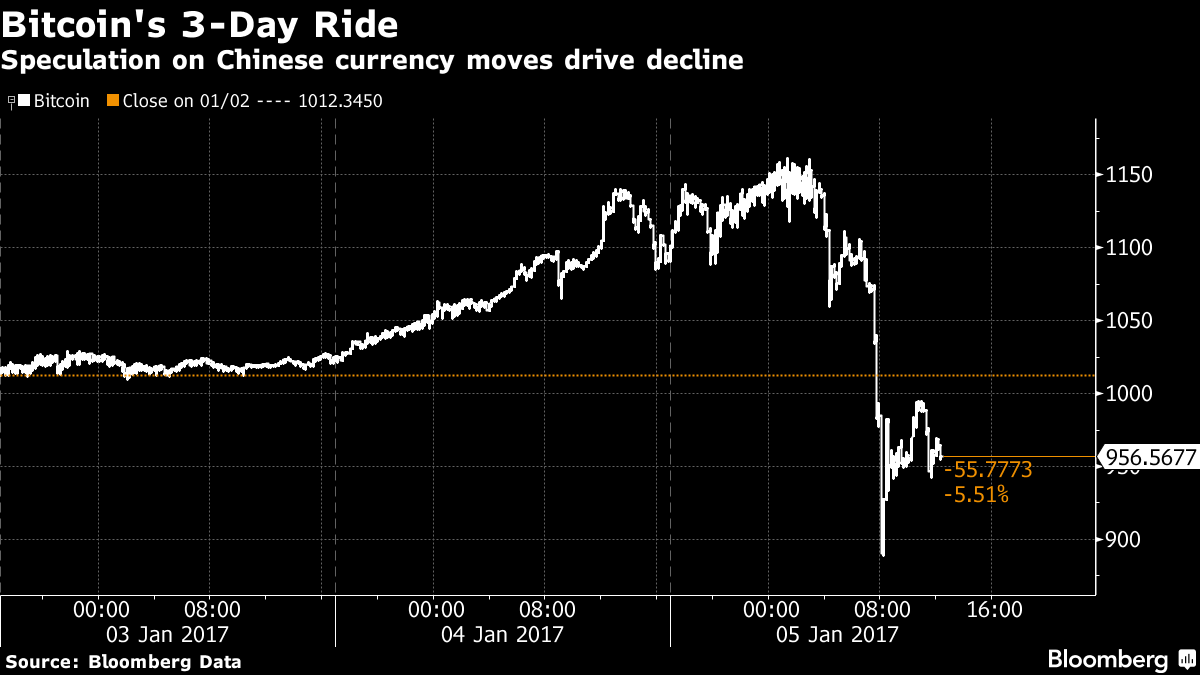 Wall Street is finally ready to bet big on blockchain technology. Many of the world’s largest banks have already moved a sizable segment of their financial infrastructure onto blockchains, and now Wall Street is following suit, according to Monday’s announcement by the Depository Trust and Clearing Corporation (DTCC), which serves as the backend for a significant portion of Wall Street trading.

The DTCC said that it’s replacing one of its central databases with a distributed ledger similar to Bitcoin’s blockchain. This ledger will be powered by IBM together with financial blockchain startups Axoni and R3. It will allow multiple financial institutions to view and update transactions at the same time. The DTCC aims to have it fully functional by early 2018.


Bitcoin plunges as much as 20 percent as Chinese yuan soars


Bitcoin plunges as much as 20 percent as Chinese yuan soars

Shame, China would be so much greater and more powerful if they allowed tech and ideas to grow.