119 replies to this topic

Yuli Ban Says: Do NOT post news about "plant-based alternative meat" or the like in this thread. This is strictly for real meat, grown through in vitro methods

Dutch scientists have used stem cells to create strips of muscle tissue with the aim of producing the first lab-grown hamburger later this year. 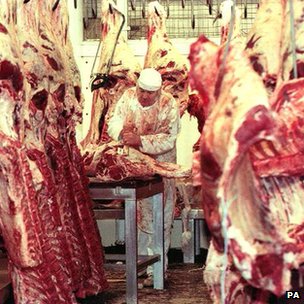 Sorry even though it's artificial it sounds horrible, I don't know why someone would want to eat a artificial burger.

This is important since the meat will be better for your health and for the planet ( since mass farting from the farms polute the atmosphere.)

The most beautiful male in the universe

Very nice!I hope it will be so delicious as normal hamburger

!I love hamburger and fast food!I'm getting hungry!I'm going to eat now!

If traditional meat practices are as unsustainable as they say, there probably won't be another option for a lot of the time. I think any aversion people have to this kind of thing will be all mental, since really, it's still just meat, only grown in a lab instead of inside an animal. Just the knowledge of that could change the quality for some people. If its perfected, I'm sure you wouldn't be able to tell the difference if no one told you it was fake.

Once process is perfected it will be so much more efficient than meat that squeaks walks, is attached to bones and skin.

Not to mention more ethical. I have am guilty of eating meat and the second this becomes available, I will switch over.

Check out /r/futuretimeline and voice you opinion on when various technologies will emerge.

I'd heard about this before, but what I heard is that the meat is edible now in terms of taste and digestability; the problem is that the major component of texture is like a watery jelly, so it's pretty disgusting. I reckon when they perfect it and this becomes common there will still be people eating actual animals, just like there was a pushback against GM crops.

Not to mention more ethical.


Circle of life my friend.

...so long as it isn't riddled with infections from not having an immune system.

Can you imagine if they go to all this work to get meat, and then they find they need an immune system, and so they need a digestive system to supply it with energy, which requires a housing... and then by the time they've finished they have a full animal again?

Circle of life my friend.


Just because it's natural, doesn't make it moral.

Check out /r/futuretimeline and voice you opinion on when various technologies will emerge.

This is the world's first lab-grown hamburger -- and it was eaten TODAY!

The reviews weren't half bad: One critic even called it "close" to the real thing.

The five-ounce patty cost more than $330,000 to produce and was made using strands... of meat grown from muscle cells taken from a living cow. Mixed with salt, egg powder and breadcrumbs to improve the taste, and colored with red beetroot juice and saffron, researchers claim it will taste similar to a normal burger. I don't know if this was already posted or not but It defiantly is worthy of an extra read.

The taste. it is similar to the original burger. I suspect that the inner part of the hamburger had as similar taste of a regular burger while the external part was less testy. just like it happened with the first lab grown hamburger made by frog cells about 6-7 years ago.

Great news! Hopefully they are able to make it much tastier and much cheaper in the future.

Is it as caloric as (or more caloric than) a regular hamburger?

You mean as it is now?

Or you will never eat a lab-grown meat for the rest of your eternity?

What are you without the sum of your parts?
Back to In The News & Current Events