Norovirus warning as bug spreads in England after lockdown eased 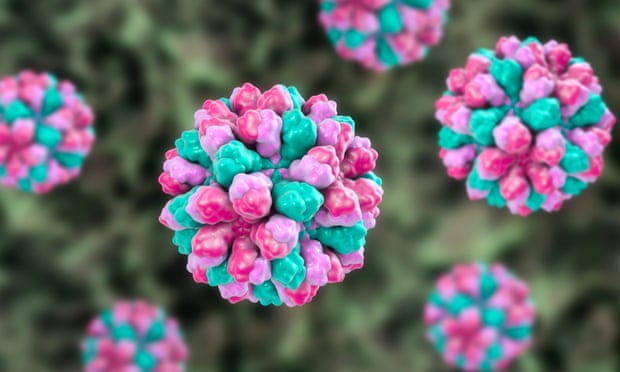 Public health experts in England are warning of an increase in the number of cases of the vomiting bug norovirus after it reached levels last seen before the Covid-19 pandemic.

Official data shows the highly infectious virus is far more widespread than usual for the summer months. It has been spreading particularly rapidly over the past few weeks among preschool children in nurseries and childcare facilities, who are bringing the virus home, causing it to spread across all age groups.

Official data from Public Health England (PHE) showed that in the last five weeks, 154 outbreaks had been reported, compared with an average of 53 between the comparable five-week period around June in the previous five years. Rates have been especially low during the pandemic due to social distancing rules and people paying more attention to hygiene, but have been rising since restrictions began to ease in early April.
Advertisement

“Norovirus, commonly known as the winter vomiting bug, has been at lower levels than normal throughout the pandemic with less opportunity to spread between people in the community but as restrictions have eased we have seen an increase in cases across all age groups,” said Prof Saheer Gharbia, the deputy director of PHE’s national infection service.

https://www.theguardian.com/society/202 ... down-eased
“People assume that time is a strict progression of cause to effect, but *actually* from a non-linear, non-subjective viewpoint - it's more like a big ball of wibbly wobbly... time-y wimey... stuff.” - Steven Moffat
Top

NEW YORK -- U.S. health officials said Thursday they now have evidence of an untreatable fungus spreading in two hospitals and a nursing home.

The “superbug” outbreaks were reported in a Washington, D.C, nursing home and at two Dallas-area hospitals, the Centers for Disease Control and Prevention reported. A handful of the patients had invasive fungal infections that were impervious to all three major classes of medications.


“This is really the first time we've started seeing clustering of resistance" in which patients seemed to be getting the infections from each other, said the CDC's Dr. Meghan Lyman.

The fungus, Candida auris, is a harmful form of yeast that is considered dangerous to hospital and nursing home patients with serious medical problems. It is most deadly when it enters the bloodstream, heart or brain. Outbreaks in health care facilities have been spurred when the fungus spread through patient contact or on contaminated surfaces.

Statistics Say Large Pandemics Are More Likely Than We Thought

The COVID-19 pandemic may be the deadliest viral outbreak the world has seen in more than a century. But statistically, such extreme events aren’t as rare as we may think, asserts a new analysis of novel disease outbreaks over the past 400 years.

The study, appearing in the Proceedings of the National Academy of Sciences the week of Aug. 23, used a newly assembled record of past outbreaks to estimate the intensity of those events and the yearly probability of them recurring.

It found the probability of a pandemic with similar impact to COVID-19 is about 2% in any year, meaning that someone born in the year 2000 would have about a 38% chance of experiencing one by now. And that probability is only growing, which the authors say highlights the need to adjust perceptions of pandemic risks and expectations for preparedness.

“The most important takeaway is that large pandemics like COVID-19 and the Spanish flu are relatively likely,” said William Pan, Ph.D., associate professor of global environmental health at Duke and one of the paper’s co-authors. Understanding that pandemics aren’t so rare should raise the priority of efforts to prevent and control them in the future, he said.

The study, led by Marco Marani, Ph.D., of the University of Padua in Italy, used new statistical methods to measure the scale and frequency of disease outbreaks for which there was no immediate medical intervention over the past four centuries. Their analysis, which covered a murderer’s row of pathogens including plague, smallpox, cholera, typhus and novel influenza viruses, found considerable variability in the rate at which pandemics have occurred in the past. But they also identified patterns that allowed them to describe the probabilities of similar-scale events happening again.

In the case of the deadliest pandemic in modern history – the Spanish flu, which killed more than 30 million people between 1918 and 1920 -- the probability of a pandemic of similar magnitude occurring ranged from 0.3% to 1.9% per year over the time period studied. Taken another way, those figures mean it is statistically likely that a pandemic of such extreme scale would occur within the next 400 years.

https://globalhealth.duke.edu/news/stat ... we-thought
"Take it easy, nothing matters in the end."
– William Shatner
Top


The Centers for Disease Control and Prevention is investigating two salmonella outbreaks that are tied to Italian-style meats like salami and prosciutto that are often used for charcuterie boards.
Richard Drew/AP

You might want to wait before making your next charcuterie board.

The Centers for Disease Control and Prevention says it is investigating two salmonella outbreaks in 17 states that are linked to Italian-style meats like "salami, prosciutto, and other meats that can often be found in antipasto or charcuterie assortments."

There is an active investigation underway, but no recalls have been announced.

As of Tuesday, 36 people had fallen ill and 12 were hospitalized, the CDC said. The numbers could be higher, though, because many who have salmonella symptoms don't seek medical care. It also takes three to four weeks to figure out whether a sick person is part of the outbreak.

Malaria Vaccine Could Save Millions of Children's Lives
by Jamie Prentis
August 26, 2021

(The National) Millions of young African lives could be saved after a study suggested the world’s first malaria vaccine cut deaths and serious illness from the disease by up to 70 per cent.

A trial followed about 6,000 children aged 5-17 months in Burkina Faso and Mali, two countries afflicted heavily by the mosquito-borne disease. Normally, they would be given antimalarial drugs four times during the rainy season when malaria occurs predominantly in the region.

While the use of medicines such as sulfadoxine-pyrimethamine and amodiaquine “is highly effective” in preventing malaria, the disease is still the main cause of death and serious illness among children under the age of 5 in countries such as Burkina Faso and Mali.

But research into the RTS, S/AS01E vaccine, published in the New England Journal of Medicine and co-ordinated by the London School of Hygiene & Tropical Medicine with partners in Mali and Burkina Faso, found the combination of the inoculation and antimalarial drugs could reduce the risk of death substantially.

Prof Brian Greenwood from LSHTM said the “results are very striking and could pave the way for a potential new approach to malaria control”.

A Deadly Fungal Disease on the Rise in the West Has Experts Worried
by Zoya Teirstein
September 15, 2021

(Grist) The Centers for Disease Control and Prevention, or the CDC, estimates that some 150,000 cases of Valley fever go undiagnosed every year, though that’s likely just the tip of the iceberg, doctors and epidemiologists told Grist. The disease is only endemic to certain geographic areas and it’s technically considered an “emerging illness,” even though doctors have been finding it in their patients for more than a century, because cases have been sharply rising in recent years. In some places, astronomically so. According to CDC data, reported Valley Fever cases in the U.S. increased by 32 percent between 2016 and 2018. One study determined that cases in California rose 800 percent between 2000 and 2018.

…some important truths about Valley fever..it is endemic to certain areas of the world, …the fungus that causes the disease lives in soil, …a majority of people infected by it are asymptomatic, and, crucially,…weather patterns and seasonal climate conditions have an effect on the prevalence of Coccidioides.

…There is a massive economic burden associated with the potential expansion of Valley fever into new areas. (Morgan) Gorris (an Earth systems scientist at Los Alamos National Laboratory in New Mexico) conducted a separate analysis based on future warming scenarios and found that, by the end of the century, the average total annual cost of Valley fever infections could rise to $18.5 billion per year, up from $3.9 billion today.

…Decades have come and gone since researchers first connected the dots between the Cocci fungus and Valley fever. A growing body of research supports the idea that climate change is now making this disease worse. Yet public awareness of what Valley fever is and how it works, in addition to the medical know-how to tackle this disease, is still lacking, even in states where Valley fever is prevalent. “You’d be surprised by how delayed the diagnosis is,” Galgiani, from the Valley Fever Center for Excellence in Arizona, told Grist. “And that’s the patients who get diagnosed.”

…It may only be a matter of time before we start thinking about fungus more often, Barker (a researcher from Northern Arizona University) said. “I honestly think that the fungal pathogens are going to be a huge problem for us going forward.”