The Labor Department released its jobless claims report on Wednesday, a day earlier than usual due to the Thanksgiving holiday. Here were the main metrics from the print, compared to consensus estimates compiled by Bloomberg:

The total number of new weekly filings fell to a fresh virus-era low for a seventh straight week. During the comparable week last year, initial filings came at well over 700,000. Claims also fell below their 2019 weekly average of approximately 220,000.

Continuing claims for regular state unemployment benefits have also drawn closer to pre-virus levels. After coming in at the lowest level since March 2020 last week, continuing claims also neared their 2019 average rate of about 1.7 million per week.

(Vox) In the United States, it’s the gas and Thanksgiving dinner and holiday toys. In the United Kingdom, it’s the energy costs and snacks and Uber fares. In Brazil, it’s the cost of food. In Germany, it’s fuel, rent, and electronics.

Consumers around the world are seeing higher prices for goods and services, and though some reasons for this vary by country, inflation is turning into something of a worldwide phenomenon.

In the US, the Consumer Price Index (CPI), which tracks what consumers pay for goods and services, rose by 6.2 percent in October compared to a year ago, the fastest increase since 1990. But other parts of the world are also seeing bumps: The eurozone (all countries using the euro) saw its inflation at about 4.1 percent, the highest in 13 years.

Covid-19, which has wreaked havoc on global supply chains, gets a lot of the blame for this. “Underneath it all, the key theme is a Covid disruption,” said Gregory Daco, chief US economist at Oxford Economics. “That’s the key reason why we’re seeing inflationary pressures around the world.”

It turns out, the global economy can go a little haywire when a once-in-a-generation pandemic rolls around. The virus scrambled supply chains, squeezed off international travel, and shut down businesses and services. Now, even as the world is recovering from these shocks, Covid-19 is still surging and resurging, and combined with other disruptions — like climate-related events — supply chains are still trying to sort themselves out.

Below is a link to a table comparing inflation rates of various countries. At this writing, the U.S., at 6.2%, is running a bit higher than many other countries, but still lower than Mexico, Russia, Brazil, Turkey, and Argentina. Argentina's rate is a whopping 52.1% in October. Japan is shown as having the lowest rate at 0.1% in October.

U.S. stocks dropped sharply on Friday as a new Covid variant found in South Africa triggered a global shift away from risk assets.

Americans who have been to the grocery store lately or started their holiday shopping may have noticed that consumer prices have spiked. The annual rate of inflation in the United States hit 6.2% in October 2021, the highest in more than three decades, as measured by the Consumer Price Index (CPI). Other inflation metrics also have shown significant increases in recent months, though not to the same extent as the CPI.

Understanding why the rate of inflation has risen so quickly could help clarify how long the surge might last – and what, if anything, policymakers should do about it. The recent acceleration in the rate of inflation appears to be fundamentally different from other inflationary periods that were more closely tied to the regular business cycle. Explanations for the current phenomenon proffered to date include continuing disruptions in global supply chains amid the coronavirus pandemic; turmoil in the labor markets; the fact that today’s prices are being measured against prices during last year’s COVID-19-induced shutdowns; and strong consumer demand after local economies were reopened.

Federal Reserve officials at their meeting earlier this month expressed concern about inflation and said they would be willing to raise interest rates if prices keep rising.

The committee that sets interest rates for the Fed on Wednesday released the minutes from the November session where it first signaled that it could be dialing back all the economic help it’s been providing during the pandemic.

The meeting summary indicates a lively discussion about inflation, with members stressing the willingness to act if conditions continue to heat up.

“Various participants noted that the Committee should be prepared to adjust the pace of asset purchases and raise the target range for the federal funds rate sooner than participants currently anticipated if inflation continued to run higher than levels consistent with the Committee’s objectives,” the minutes stated.

Officials stressed a “patient” approach regarding incoming data, which has shown inflation running at its highest pace in more than 30, the years. 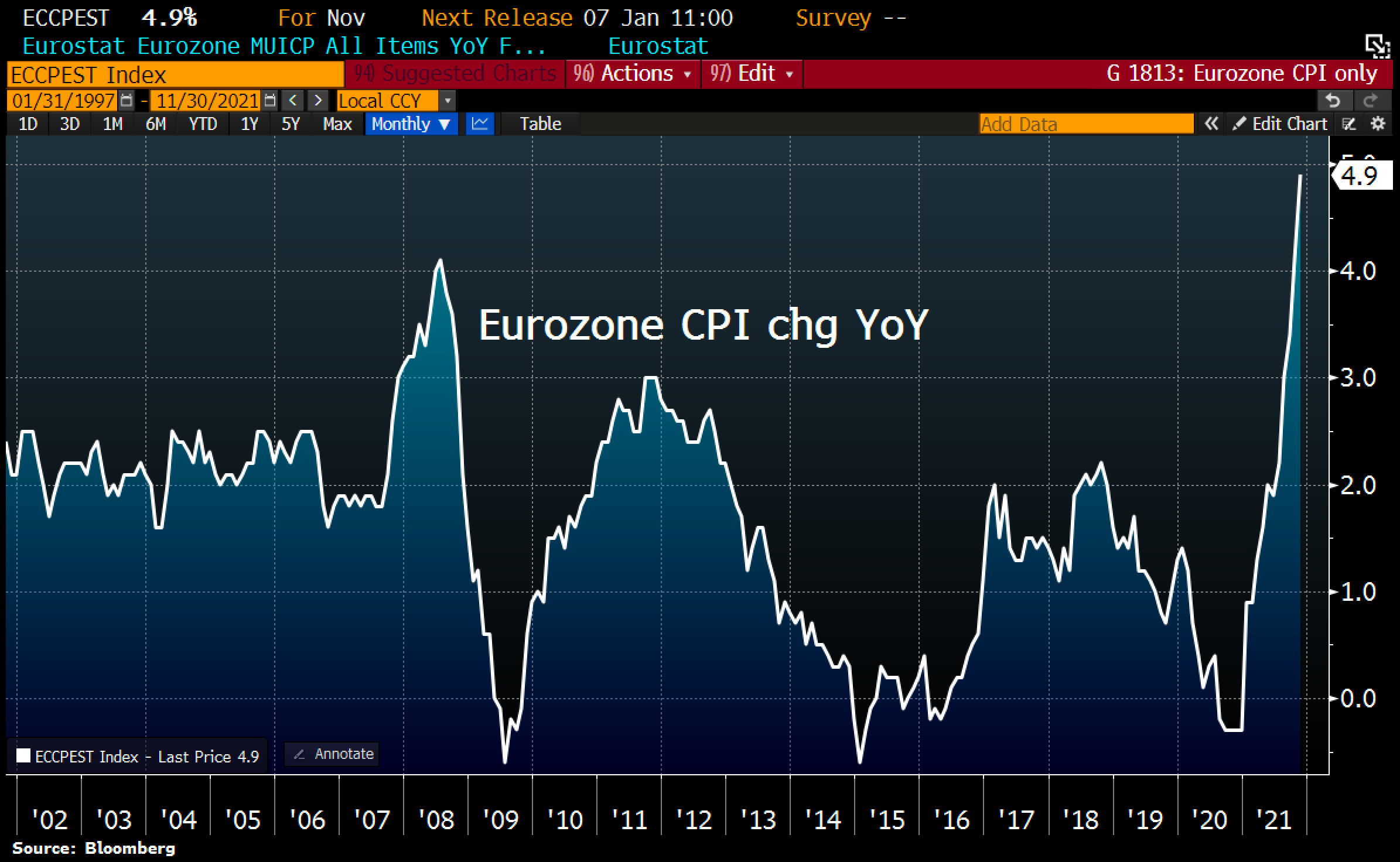 As prices creep higher for food, gasoline and other necessities, nearly half of U.S. households say they are feeling the financial strain, according to a Gallup survey released Thursday.

Roughly 45 percent of households are being hurt by price increases, according to a survey of nearly 1,600 people conducted Nov. 3 to Nov. 16. About 1 in 10 said that hardship was severe enough to affect their standard of living, while 35 percent described the hardship as “moderate.”

“Most low-income households are already hurting,” said Mohamed Younis, editor in chief of Gallup. “You can only imagine what that’s going to look like in the next few months if this continues to get worse.”