Boris Johnson has rejected Brussels’ latest attempt to iron out problems with the post-Brexit arrangements for Northern Ireland, insisting that the withdrawal agreement signed last year must be renegotiated.

A series of proposals published by the European Commission on Monday with the aim of easing implementation of the Northern Ireland protocol were said to be insufficient for the scale of the problems.

A UK government spokesperson said the two sides instead needed “comprehensive and durable solutions”. David Frost, the minister responsible for Brexit issues, has said that without a major change to the legal text of the protocol, the government will consider triggering article 16 of the EU-UK agreement to suspend parts of the deal.

Such a move would be permitted where it can be shown that “serious economic, societal or environmental difficulties” are arising. But the commission would probably such a decision. It would be likely to go to arbitration, raising the risk of trade sanctions down the line.

The government issued a command paper last week detailing the key changes it wishes to make to the arrangements under which Northern Ireland in effect stays in the EU’s single market and the bloc’s customs rules are enforced on goods passing across the Irish Sea.

https://www.theguardian.com/politics/20 ... negotiated
“People assume that time is a strict progression of cause to effect, but *actually* from a non-linear, non-subjective viewpoint - it's more like a big ball of wibbly wobbly... time-y wimey... stuff.” - Steven Moffat
Top

Interruptions to food supply to Scottish shops and restaurants are largely due to Brexit - not the “pingdemic” - say independent food retailers. They report that one major issue is hauliers from the EU have cut the UK from their routes. Some suppliers in European countries are also finding other buyers for their produce, because of the costs involved in post-Brexit paperwork.

Other commentators pointed out that Scotland does not in fact have a “pingdemic” as the Scottish track and trace app alerted only around 2500 people last week to isolate. On social media, sceptics shared images of abundant fruit and veg displays in supermarkets in EU countries, which are also enduring heatwaves, Covid and using test and trace apps.

A YouGov poll last week showed more than a third of people across the UK are experiencing food shortages in local stores. Scots however may be particularly affected by the shortage of lorry drivers caused by Brexit and Covid. Most produce from EU countries comes through England. After partial border checks, it has to transfer to lorries for longer journeys. In response to concerns over supply, Independence Live has launched a Food Sovereignty campaign.

Toilet roll and kitchen roll aisles at Pitlochry Co-op were completely empty this weekend. Water shelves were full – but instead of the usual variety, only with Co-op brand water. A staff member said: “Quite a lot of our drivers were from the EU. There were about six who used to deliver to this store – and they are all away now because of Brexit.” Nobody in the store was self-isolating.

Award-winning greengrocer Francesco Cosentino, who runs Il Fruttivendolo in Linlithgow and is opening a shop in Edinburgh’s Dalry area, said: “I don’t think people in this country have any idea how dependent we are on food from the EU. Even something like cheddar – people think that is British but a lot of it is made in Ireland.” 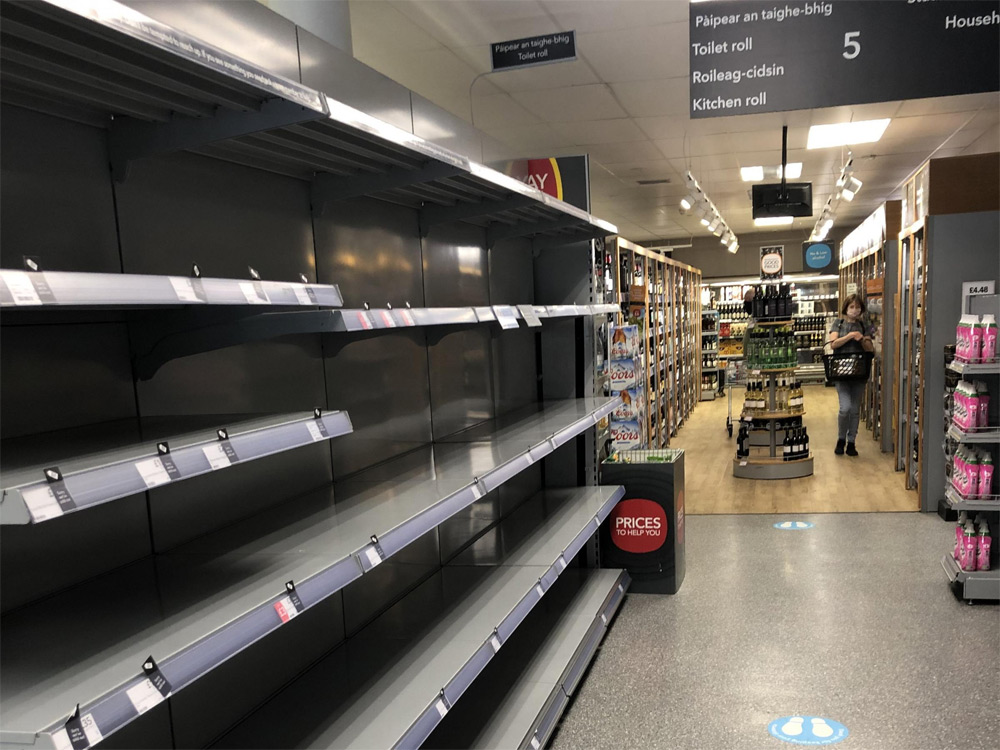 British citizens travelling to the EU’s Schengen Area will be required to pay €7 (£6) from next year, under the bloc’s new travel system.

In a further example of the aftereffects of Brexit, non-EU citizens who will be exempt from needing a visa will be asked to register and obtain authorisation before travelling to the EU.

The changes form part of the European Travel Information and Authorisation System which is due to come into effect by the end of 2022.
News and analysis, direct from Westminster to your inbox

Under the new rules, non-EU citizens, which includes Britons, will be asked to fill in an online form and pay just under £6 to be allowed to travel to the Schengen Area, which includes almost the entire EU, including holiday hotspots France, Greece, Italy, Spain and Portugal.

The authorisation will last for three years, and will allow multiple trips across different countries in the Schengen zone.

https://inews.co.uk/news/brexit/uk-trav ... z4e_wzfI0I
“People assume that time is a strict progression of cause to effect, but *actually* from a non-linear, non-subjective viewpoint - it's more like a big ball of wibbly wobbly... time-y wimey... stuff.” - Steven Moffat
Top

The UK’s drug and medical devices regulator is to lose a substantial number of staff as part of a post-Brexit restructure, The BMJ has learned.

The Medicines and Healthcare Products Regulatory Agency (MHRA), which employs around 1200 people in England, could cut its workforce by as much as 20% as part of a transformation programme that will radically reshape how the agency operates, leaked documents seen by The BMJ show. The agency is targeting savings after losing a substantial amount of funding from the European regulatory system after the UK’s exit from the European Union.

The documents reveal details of a voluntary exit scheme that MHRA is offering to staff from its divisions on vigilance and risk management of medicines, licensing, devices, inspection enforcement and standards, as well as its committee secretariat.

A document marked “official sensitive,” seen by The BMJ, said that the MHRA’s income is expected to reduce by 15-20% in next financial year and beyond.

UK musicians and performers will be able to tour in a number of European countries without the need for a visa or work permit, the government has announced.

Rules that came into force at the beginning of the year do not guarantee visa-free travel for musicians in the EU and have prompted fears that touring artists will incur large fees in many of the countries they visit.

However, the Department for Digital, Culture, Media and Sport (DCMS) said it had negotiated with 19 EU member state countries to allow British musicians and performers to conduct short tours visa-free.

The government said talks were ongoing with remaining EU countries, including Spain, Portugal and Greece, to align their arrangements with the UK’s, which allows touring performers and support staff to visit for up to three months without a visa.

https://www.theguardian.com/politics/20 ... ies-brexit
“People assume that time is a strict progression of cause to effect, but *actually* from a non-linear, non-subjective viewpoint - it's more like a big ball of wibbly wobbly... time-y wimey... stuff.” - Steven Moffat
Top