Rupert Murdoch’s News Corp. wrote down the value of its once high-flying Sun title to zero, underscoring the dramatic decline in Britain’s newspaper industry.

The tabloid’s blend of gossip and right-wing political coverage has made it Britain’s most widely-read paper for more than four decades, until the rival Daily Mail claimed the title last year.

Its editors have struggled to carve out a place for the paper in a new world of online news -- trying a paywall model before abandoning it -- and attempting to move on from a phone hacking scandal that blew up a decade ago, damaging the Sun’s credibility as a campaigner for social causes.

News Corp. said its cash flow forecasts for the Sun led it to book an impairment of 84 million pounds ($119 million) in 2020, according to its accounts published Friday. The carrying value of its publishing rights and titles as of June 28 last year fell to zero from 112 million pounds in 2019.

Selfridges goes on sale for over £4bn

Selfridges may be sold for £4 billion or more after considering buyer interest following an unsolicited approach.

The luxury department store is owned by the Weston family, who also control Primark, and have brought in advisers from Credit Suisse.

The bid interest is likely to draw out other would-be buyers.

An approach to buy Selfridges has been made, but a deal was not a foregone conclusion.

Meanwhile, the Westons are likely to consider the extent to which any interested parties value sustainability as Selfridges has put sustainability at the heart of its strategy.

https://www.retailgazette.co.uk/blog/20 ... -over-4bn/
“People assume that time is a strict progression of cause to effect, but *actually* from a non-linear, non-subjective viewpoint - it's more like a big ball of wibbly wobbly... time-y wimey... stuff.” - Steven Moffat
Top

Morgan Stanley CEO to NYC workers: Be back in the office by September or else
Source: CNN


New York (CNN Business)The CEO of one of Wall Street's top investment banks has a message for employees in its New York offices. You need to come back to work this fall.

Morgan Stanley (MS) chief James Gorman said at an investing conference earlier this week that it's time for the bank's New York workers to head back to the office now that more people are getting vaccinated for Covid-19 and life is slowly returning to normal.

"If you can go to a restaurant in New York City, you can come into the office. And we want you in the office," Gorman said.

Gorman made the comments Monday at an annual conference about financial payments and commercial real estate. He joked that he was doing so from the company's New York office — and while wearing a suit and tie to boot.

Tiger Global in Talks to Back BharatPe at $2.5 Billion Valuation

(TechCrunch) Indian fintech startup BharatPe is in advanced stages of talks to raise about $250 million in a new financing round led by Tiger Global, two sources familiar with the matter told TechCrunch.

The new round, a Series E, is giving the three-year-old New Delhi-headquartered firm a pre-money valuation of $2.5 billion, sources said, requesting anonymity as the matter is private. The round hasn’t closed, so terms may change, sources cautioned.

BharatPe, which prior to the new round had raised about $233 million in equity and $35 million in debt, was valued at about $900 million in its Series D round in February this year, and $425 million last year.

Indian news outlet the CapTable first reported about the talks between Tiger Global and BharatPe and said the round would value the startup at over $2 billion. BharatPe, which counts Coatue, Ribbit Capital, and Sequoia Capital India among its existing investors, declined to comment.

BharatPe operates an eponymous service to help offline merchants accept digital payments and secure working capital. Even as India has already emerged as the second-largest internet market, with more than 600 million users, much of the country remains offline.

(Morgan Stanley) What Happened in the Markets?

After nearly a month without a 1% move on the S&P 500, equities have now had back-to-back sessions of sharp moves in both directions. On Friday, stocks sold off as markets continued to digest a relatively hawkish Federal Reserve following their Wednesday FOMC meeting. On Monday, markets rebounded, paring all of Friday's losses and more, with cyclical sectors leading the market higher. Markets could continue to react to commentary from members of the Fed this week, with a host of board members slated to speak throughout the week.

Rates were higher across the curve, with the 10-year Treasury yield at 1.49% as of the 4 p.m. equity market close. Gold was 1.1% higher on the day while WTI oil also closed higher to just under $74 per barrel. The US dollar was modestly weaker on the trading session, as measured by the US Dollar Index.

caltrek: With the economy recovering quickly and prices up for goods experiencing bottle neck supply problems, it is not too surprising to me that the Federal Reserve is feeling a bit "hawkish". This points to a difference between 19th century and 21st century capitalism. In this century, institutions have powers and authority to take actions to smooth out the business cycle and handle short term inflationary tendencies. Doesn't work to absolute perfection, but compared to the 19th century...
Top

Spot the friendly robot dog has a new owner. Well, the company that makes this computer-controlled pooch does. On Monday, SoftBank announced Hyundai Motor Group officially took a controlling stake in Boston Dynamics, which tinkers with robots like Spot. Hyundai and SoftBank first revealed the deal last year, but as of today, Hyundai now owns a controlling stake -- at least 80% of the firm.

The companies didn't provide any additional details surrounding the deal, but we know Hyundai plopped down $1.1 billion to make this sale happen. As for what Boston Dynamics' new owner wants from the company, that's also totally unclear. The best we can assume is that Hyundai's pretty interested in robots. The automaker previously announced a new division dedicated to creating "walking cars" and other robots, so it could be the company's keen to have Boston Dynamics on its team as it pursues that. I can see it now: "Every new Hyundai walking car comes with your very own robot dog!" 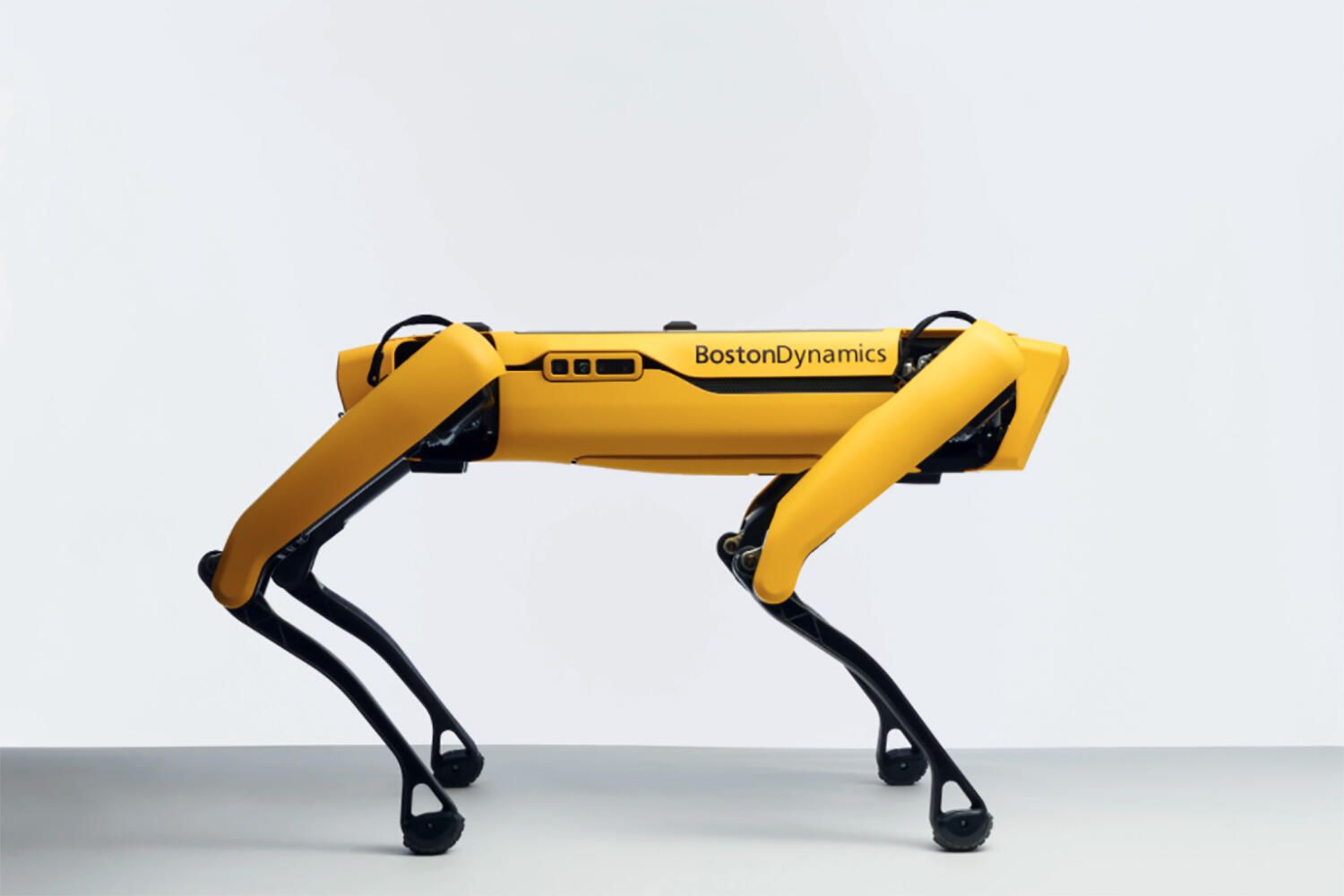 D.C. statehood is set to get a hearing before a Senate committee on Tuesday, with proponents trying to push the cause further than it has gone before in Congress even as prospects are low in the evenly divided chamber.

D.C. Mayor Muriel E. Bowser (D) and a host of civil rights and constitutional experts will testify before the Senate Committee on Homeland Security and Governmental Affairs starting at 10 a.m.

It’s statehood’s first Senate committee hearing since 2014. The committee did not bring the bill up for a vote that year, but advocates are optimistic that it may get one this year.

This will be shot down as unconstitutional as it is.
Top

D.C. statehood is set to get a hearing before a Senate committee on Tuesday, with proponents trying to push the cause further than it has gone before in Congress even as prospects are low in the evenly divided chamber.

D.C. Mayor Muriel E. Bowser (D) and a host of civil rights and constitutional experts will testify before the Senate Committee on Homeland Security and Governmental Affairs starting at 10 a.m.

It’s statehood’s first Senate committee hearing since 2014. The committee did not bring the bill up for a vote that year, but advocates are optimistic that it may get one this year.

This will be shot down as unconstitutional as it is.

It seems you never of the phrase "no taxation without representation" because this is what is happening to the residents of Washingtion D.C.
The Potato Praiser
Top

I somehow knew it would be brief.

Edit: I'm gonna do it.
And remember my friend, future events such as these will affect you in the future
Top


WASHINGTON, June 22 (Reuters) - Republicans in the narrowly divided U.S. Senate on Tuesday blocked an election reform bill that Democrats said is critical to democracy, arguing that it infringed on states' rights.

A 50-50 party-line vote fell short of the 60-vote threshold needed to advance most legislation under Senate rules.

Democratic Senate Majority Leader Chuck Schumer set the bill as one of his party's top priorities, saying it could have offset a wave of measures passed by Republican-controlled state legislatures imposing new limits on voting.