This is a general thread for news and discussions related to Germany. I did a search to see if such a thread had already been started and found none. I did find that Germany was mentioned in a lot of other threads. What better place to start a discussion, with more focus on Germany, than with the topic of an important election?

Who’s Who in Germany’s Historic Election
by Silvia Amaro
September 24, 2021

(CNBC) Germany’s federal elections on Sunday will usher in a new political era for both the country and the wider European Union.

CNBC takes a look at the main political figures that could shape the future of Europe’s largest economy.

A Good Riddance to Angela Merkel
by Samuel Goldman
September 26, 2021

(The Week) Germans go to the polls on Sunday to select a new government. The picture is complicated by Germany's multiparty system and indirect electoral process. Essentially, voters face a choice between a centrist coalition built around the Christian Democratic Union (CDU), or a leftist one with the Social Democratic Party at its core.

Fluctuating polls leave the outcome in doubt. One way or the other, though, Chancellor Angela will soon leave the scene. After 16 years in office and nearly 20 at the head of the CDU, Merkel has defined German politics in the 21st century. Her retirement is the end of an era.

We shouldn't mourn that departure. Despite her reassuring demeanor, Merkel was a destabilizing figure. Once celebrated as the substitute "leader of the free world," her combination of grand moralism and parochial interest undermined the liberal ideals she professed.

Merkel's first big mistake came early in her tenure. In 2007, Iceland's banking system broke down under its massive debt burden. Over the following year, the problem spread to Portugal, Italy, Greece, and Spain, creating the demeaning but amusing acronym PIIGS. Banking on their association with the stronger economies of Northern Europe, especially Germany, the PIIGS were able to borrow more money than would otherwise have been possible. But use of the euro made it impossible to devalue their currencies when faced with loans they couldn't repay.

In the end, Germany and other EU members did bail out the PIIGs. But the compromise Merkel helped broker conditioned debt relief on austerity policies that led to increased unemployment, cuts in public services, and political upheaval, including a dramatic revival of far-right and far-left parties.

The SPD had 26% of the votes, according to the exit poll, with the center-right Christian Democratic Union of outgoing Chancellor Angela Merkel on 24%, followed by the Greens at 14.5%, the FDP at 12% and the AfD at 10%.

Small Parties are the Kingmakers After German Elections
by Cain Burdeau
September 27, 2021

(Courthouse News) — Germany's national elections on Sunday saw the center-left Social Democrats claim the largest share of votes and retiring Chancellor Angela Merkel's conservatives suffer a historic defeat, but it will be smaller parties with two very different world views — the pro-environment Greens and pro-business Free Democrats — that will play kingmakers in forming the next government.

The results leave German politics in limbo as potentially lengthy and messy coalition talks begin over who will take over the chancellery and lead Germany's first post-Merkel government.

After 16 years at the helm, Merkel did not stand in the election and will step down once a new government coalesces. She has not said what she plans to do next and there is a chance she could end up taking on a job within the European Union bureaucracy.

The outcome of the Bundestag elections are closely watched and will have far-reaching consequences because Germany is the EU's largest economy and it plays a decisive role in European affairs.

For example, Germany's fiscally conservative governments under Merkel forced poorer southern nations to cut public spending and her mercantilist spirit led the EU to maintain trade ties with the authoritarian regimes in China and Russia.

(Vox) BERLIN — The release of one of the first election exit polls showed Germany’s center-left Social Democrats with a slight lead. That was enough to send the crowd at the Willy Brandt Haus, the party’s headquarters in Berlin, into cheers and applause. After 16 years of Angela Merkel and her center-right party, Germany looked as if it might be on the verge of political change.

It would take quite a few more hours, but early Monday, German election officials released results for the parliamentary elections, putting the Social Democrats (SPD) ahead with 25.7 percent of the vote. They narrowly beat the conservatives Merkel had helmed for almost two decades, who won 24.1 percent.

It was a remarkable turn for the SPD, which had trailed in the polls for most of the election. But the party presented its candidate, finance minister Olaf Scholz, as a stable and competent leader — a natural successor to the retiring Merkel, at least in temperament. Scholz’s opponents also did him plenty of favors. Despite being tapped as Merkel’s successor, Armin Laschet of the Christian Democratic Union (CDU) made some big gaffes, and his unpopularity appeared to bring his party down with him.

The SPD’s slim victory showed a vote for change — of sorts. For the first time in 16 years, a center-left party will have the most seats in the Bundestag, or German parliament. Vox spoke with candidates from various political parties, SPD campaign officials and party members, pollsters, and other experts (as part of a delegation of journalists to observe the elections, funded by the Friedrich Ebert Foundation), and it’s clear that the campaign was largely a battle for the center. The Greens — who put up a chancellor candidate for the first time — led the polls at one point, and had a historic showing, with almost 15 percent of the vote. But the election ultimately came down to a fight for the voters who are still in Merkel’s orbit.

The SPD won that fight in this election. But now begins the unpredictable process of trying to bring together the next German government. Germany’s proportional representation system means that chancellor candidates aren’t directly elected, and with the close margins, both the SPD and the CDU (with its sister party in Bavaria, the Christian Social Union) will be courting other parties to try to form a government coalition. It means weeks, if not months, of uncertainty. The last time Merkel tried to form a coalition, after elections in 2017, negotiations took an unprecedented five months. The only sure thing is that Merkel will stay on as caretaker chancellor until Germany sorts out its political future, whatever that might look like without her.

Being a Woman in German Politics Still Isn’t Easy. The Case of Annalena Baerbock
by Emily Schultheis
Updated September 27, 2021

(Politico) COLOGNE, Germany — On a warm evening in early September, Annalena Baerbock took the stage on a packed city square here. There were just over three weeks to go until Germany’s general election, which will take place on Sunday, and around 2,000 people had come out to see the progressive, pro-environment Green party’s first-ever candidate for chancellor. “You can feel the change here on Wilhelmplatz,” Baerbock told the audience, to cheers and applause.

As she spoke, four young girls toward the front of the crowd climbed a metal divider to get a better look at the candidate. Baerbock, energetic with microphone in hand, occasionally referred to them in her speech: When a handful of right-wing protesters started shouting, she reminded them there were children present, and during her Q&A session, she came over and answered the girls’ question about how to live a more climate-friendly life. Over the course of the rally, other girls wandered over from their parents until about a dozen stood there, grouped together near the stage, eyes turned up toward Baerbock.

These girls have an experience of politics American girls don’t: They have never known a country in which a woman didn’t hold the highest office in the land. For the past 16 years, Angela Merkel has been a steady hand at the country’s helm and arguably the most powerful woman in the world.

But in Baerbock's candidacy, they're also watching a real-time demonstration that even in Germany — a country often held up as a model for embracing and re-electing a powerful woman leader — sexism isn't easy to root out of politics. It can be difficult even to disentangle the two.

Baerbock was an early contender in the election, leading her two main rivals for several weeks in the spring — an unprecedented feat for the Greens, who have never before had a real shot at the chancellery. Since then, she has come under unrelenting attack for a series of off-the-trail missteps, including revelations of plagiarism and resume inflation, while male rivals have more easily sidestepped their minor scandals. She has also been the target of frequently gendered disinformation attacks, one of which featured her face photoshopped onto a naked woman’s body with a caption implying she was a sex worker. Along the way, Baerbock has faced more familiar examples of sexism, such as questions about whether she can balance the chancellorship with being a mother. 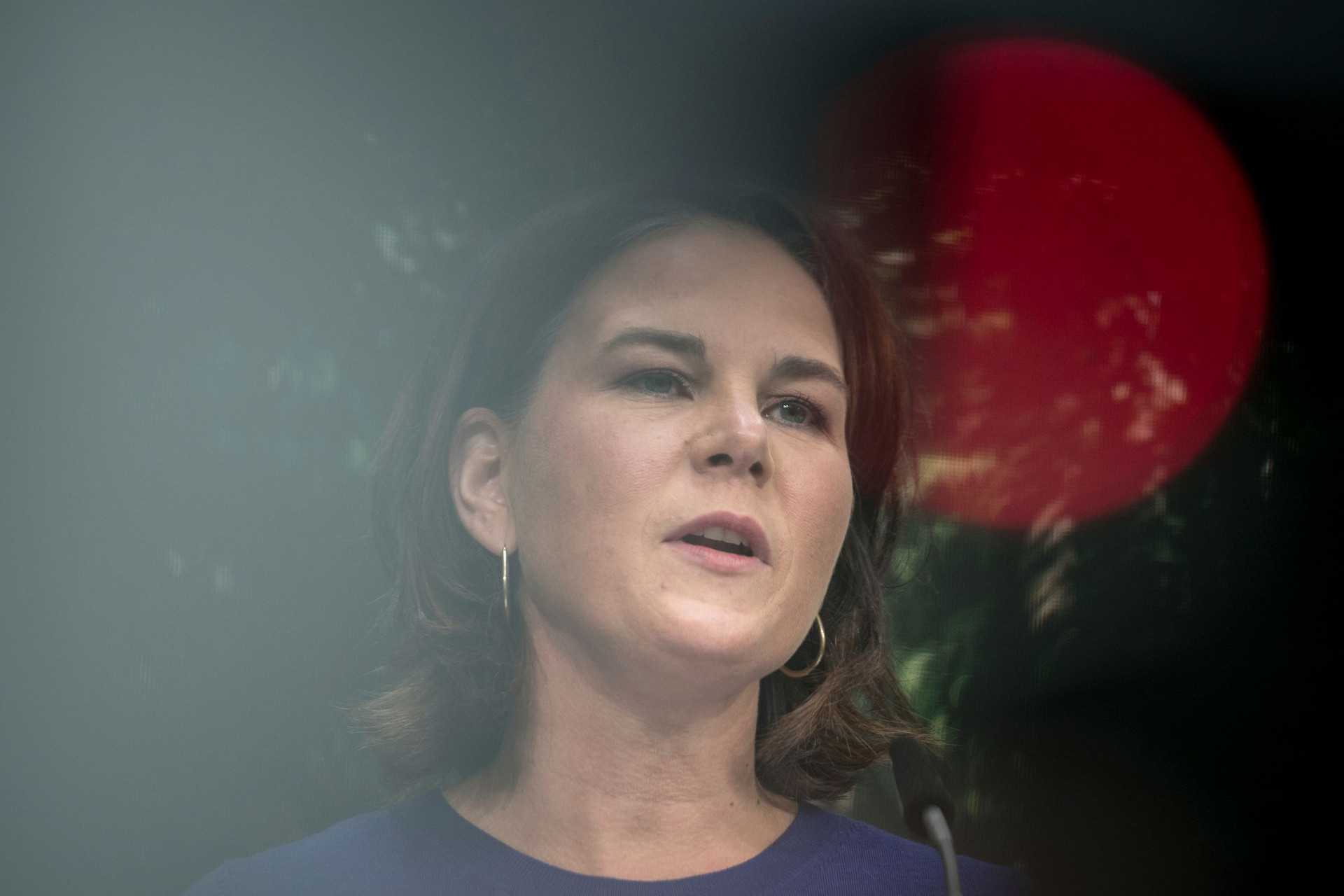 (Politico) Germany has voted, and the big remaining questions are what the makeup of the next governing coalition will be and who will succeed Angela Merkel. As chancellor for a record 16 years, Merkel helped guide Germany and the European Union through the financial crisis, the influx of migrants in 2015, Brexit and four years of transatlantic estrangement under Donald Trump.

Merkel’s successor remains unknown, though the Social Democrats’ Olaf Scholz appears the likeliest bet right now. But even with the chancellorship and the coalition up for grabs, the results provide some important clues about the future of Germany’s foreign policy. The transatlantic defense alliance is likely to encounter some trouble in the coming years, but more cooperation on new challenges like China might be on the menu.

In the United States, supporters of the traditional transatlantic relationship, centered on NATO, may be disappointed by the coalition that is likely to emerge. But for those interested in a new transatlantic alliance, focused on the United States and Europe countering China together, the outcome could be good news. The two smaller parties that will make or break any German coalition — the Greens and the liberal Free Democrats (FDP) — are inclined toward a stronger stance against China, which Germany under Merkel’s “Grand Coalition” of Christian Democrats (CDU) and Social Democrats (SDP) was more hesitant to take. Whatever the makeup of the new coalition, expect a livelier debate in post-Merkel Germany about taking a tougher line on China.

The coalition will most likely be made up of three parties — something Germany hasn’t seen since the 1950s. With the Greens and the FDP definitely included thanks to strong performances on Sunday, what’s unclear is which party will lead the government. The most likely outcome is a “traffic-light” coalition (so named because of the signature colors of the three parties that would comprise it) led by Scholz’s SPD, Sunday’s narrow winner, with the Greens and the FDP as partners. The “Jamaica” coalition (whose three parties’ colors resemble the black, green and yellow Jamaican flag) would be the same, except led by the CDU; this combination is less likely because of the CDU’s poor showing. The Greens and the FDP, therefore, have significant maneuvering room as the SPD and CDU jostle to get them on their side.