Employees Are Quitting Instead of Giving Up Working From Home

The drive to get people back into offices is clashing with workers who’ve embraced remote work as the new normal.

While companies from Google to Ford Motor Co. and Citigroup Inc. have promised greater flexibility, many chief executives have publicly extolled the importance of being in offices. Some have lamented the perils of remote work, saying it diminishes collaboration and company culture. JPMorgan Chase & Co.’s Jamie Dimon said at a recent conference that it doesn’t work “for those who want to hustle.”

But legions of employees aren’t so sure. If anything, the past year has proved that lots of work can be done from anywhere, sans lengthy commutes on crowded trains or highways. Some people have moved. Others have lingering worries about the virus and vaccine-hesitant colleagues.

It’s still early to say how the post-pandemic work environment will look. Only about 28% of U.S. office workers are back at their buildings, according to an index of 10 metro areas compiled by security company Kastle Systems. Many employers are still being lenient with policies as the virus lingers, vaccinations continue to roll out and childcare situations remain erratic.

But as office returns accelerate, some employees may want different options. A May survey of 1,000 U.S. adults showed that 39% would consider quitting if their employers weren’t flexible about remote work. The generational difference is clear: Among millennials and Gen Z, that figure was 49%, according to the poll by Morning Consult on behalf of Bloomberg News.

“High-five to them,” said Sara Sutton, the CEO of FlexJobs, a job-service platform focused on flexible employment. “Remote work and hybrid are here to stay.” 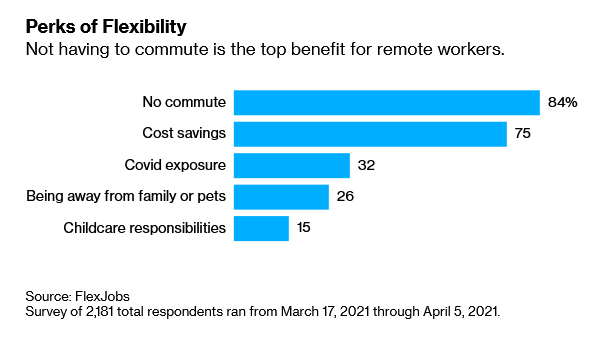 Remote working has been life-changing for disabled people, don’t take it away now

In the rush to go ‘back to normal’, must we sacrifice all the gains that have been made on disability inclusion?

https://www.theguardian.com/commentisfr ... -inclusion
"Take it easy, nothing matters in the end."
– William Shatner
Top

Remote Work Will Bring Down a Trillion-Dollar Company

Several of the $Trillion-Dollar tech giants will be disrupted by remote work.

9 in 10 people never want to work in an office again full-time. Full-time office companies face the biggest exodus of talent in history. I predict we are about to see the highest period of turnover in history between companies, as individuals everywhere optimize their working situation towards what provides them with the highest quality of life.

This is a replay of eCommerce vs. physical stores

Physical retail is no longer economically viable because eCommerce is more convenient, cheaper, and it offers far more flexibility, control, and choice.
Virtual-first companies crush office-first companies for the same reason. Every office becomes a millstone around the neck of companies that stops them from succeeding.

Apple employees are pushing back against a new policy that would require them to return to the office three days a week starting in early September. Staff members say they want a flexible approach where those who want to work remote can do so, according to an internal letter obtained by The Verge.

“We would like to take the opportunity to communicate a growing concern among our colleagues,” the letter says. “That Apple’s remote/location-flexible work policy, and the communication around it, have already forced some of our colleagues to quit. Without the inclusivity that flexibility brings, many of us feel we have to choose between either a combination of our families, our well-being, and being empowered to do our best work, or being a part of Apple.”

The move comes just two days after Tim Cook sent out a note to Apple employees saying they would need return to the office on Mondays, Tuesdays, and Thursdays starting in the fall. Most employees can work remotely twice a week. They can also be remote for up to two weeks a year, pending manager approval.

It’s an easing of restrictions compared to Apple’s previous company culture, which famously discouraged employees from working from home prior to the pandemic. Yet it’s still more conservative compared to other tech giants. Both Twitter and Facebook have told employees they can work from home forever, even after the pandemic ends.

For some Apple workers, the current policy doesn’t go far enough, and shows a clear divide between how Apple executives and employees view remote work.

Why people are threatening to quit if recalled to the office

After COVID, some think remote work is worth more than the job itself

Rumblings in the recruiter world say employers are having difficulty hiring and retaining talent without offering the opportunity for remote work, if not fully and permanently remote work.

We spoke to the workers willing to flip some tables and quit entirely if they’re made to go back in office.

And boy were there a lot of them.

https://casebycase.substack.com/p/-your ... people-are
"Take it easy, nothing matters in the end."
– William Shatner
Top

Apple employees have launched a campaign to push back against Tim Cook's plans for a widespread return to the office, according to reports.

It follows an all-staff memo last week in which the Apple boss said workers should be in the office at least three days a week by September.

But staff are demanding more flexibility, according to an internal letter obtained by news site The Verge.

Apple's policy has "already forced some of our colleagues to quit", it said.

"Without the inclusivity that flexibility brings, many of us feel we have to choose between either a combination of our families, our wellbeing, and being empowered to do our best work, or being a part of Apple," the letter said.

"Over the last year we often felt not just unheard, but at times actively ignored," it also reads, accusing management of a "disconnect" with employees on the topic of remote or flexible working.

Social control in real time: the owners are deliberately framing the argument this way to guide public opinion. The people who want to continue remote work are the entitled ones, not the minority who want to return to the status quo.

You know, I've heard that one reason bosses love offices is because they can keep tabs on the underlings. It's harder to do this with remote work, and a lot of bosses are paranoid that the workers would goof off or work in pajamas or exploit technical issues to get out of working, even though this doesn't really happen in any disrespectable amount. It's just the fear of it happening that drives this mindset.
You can't really do that in an office. What, are you going to clone yourself or get a doppelganger to show up in your place? That only works on bad sitcoms!
And remember my friend, future events such as these will affect you in the future
Top

In late March, Amazon announced that unlike other Seattle tech companies, it planned to return to an “office-centric” approach post-pandemic. The company has now reversed course, though, announcing Thursday that it will be offering flexible work-from-home options for its employees moving forward.

According to an internal memo sent to employees, the company’s “new baseline” will be three days a week in the office, with the option for two work-from-home days each week. Specific days will vary team to team.

Amazon employees who wish to come into the office fewer than three days a week will also be allowed to apply for an exception, which would allow them to “be considered primarily a remote worker.” Those approved for an exception won’t have a dedicated desk in the office, and will instead use an “agile workspace that provides space to collaborate” for days they work in-person.

Explaining the decision to shift away from its initial “office-centric” plan, Amazon noted that its “thinking is predicated on what we believe will be most beneficial for customers, while also trying to give employees more flexibility in their work environment and lives.”