HONG KONG (AP) — Hong Kong police on Thursday arrested five trade union members over children’s books they described as seditious, and a court denied bail for four editors and journalists held on charges of endangering national security, as part of a widening crackdown on dissent in the city.

The five who were arrested are members of the General Association of Hong Kong Speech Therapists, according to local media reports.

The books feature stories that revolve around a village of sheep that has to deal with wolves from a different village. The sheep take action like going on strike or escaping by boat, according to the synopses published on the association’s website.

(TechCrunch) Hello and welcome back to TechCrunch’s China Roundup, a digest of recent events shaping the Chinese tech landscape and what they mean to people in the rest of the world.

Despite the geopolitical headwinds for foreign tech firms to enter China, many companies, especially those that find a dependable partner, are still forging ahead. For this week’s roundup, I’m including a conversation I had with Prophesee, a French vision technology startup, which recently got funding from Kai-Fu Lee and Xiaomi, along with the usual news digest.

Like many companies working on futuristic, cutting-edge tech in Europe, Prophesee was a spinout from university research labs. Previously, I covered two such companies from Sweden: Imint, which improves smartphone video production through deep learning, and Dirac, an expert in sound optimization.

The three companies have two things in common: They are all in niche fields, and they have all found eager customers in China.

For Prophesee, they are production lines, automakers and smartphone companies in China looking for breakthroughs in perception technology, which will in turn improve how their robots respond to the environment. So it’s unsurprising that Xiaomi and Chinese chip-focused investment firm Inno-Chip backed Prophesee in its latest funding round, which was led by Sinovation Venture.

By KATIE TAM and JANICE LO

HONG KONG (AP) — A pro-democracy protester was sentenced Friday to nine years in prison in the closely watched first prosecution under Hong Kong’s national security law as the ruling Communist Party tightens control over the territory.

Tong Ying-kit, 24, was convicted of inciting secession and terrorism for driving his motorcycle into a group of police officers at a July 1, 2020, rally. He carried a flag bearing the banned slogan, “Liberate Hong Kong, revolution of our times.”

President Xi Jinping’s government imposed the law on the former British colony last year following protests that erupted in mid-2019. Beijing has rolled back the territory’s Western-style civil liberties and tried to crush a pro-democracy movement by jailing activists. The public’s role in picking Hong Kong’s legislators has been reduced.

Critics accuse Beijing of violating the autonomy promised when Hong Kong returned to China in 1997 and wrecking its status as a global business center. Human rights activists say the security law is being abused to attack legitimate dissent.

It was a tough call whether to put this in the China Watch Thread or a thread dealing with AI and robots. I hope you all think I made the right choice. Also, I would have no problems with a moderator type citing this in another thread they think is appropriate.

(TechCrunch) Hello and welcome back to TechCrunch’s China roundup, a digest of recent events shaping the Chinese tech landscape and what they mean to people in the rest of the world.

The tech industry in China has had quite a turbulent week. The government is upending its $100 billion private education sector, wiping billions from the market cap of the industry’s most lucrative players. Meanwhile, the assault on Chinese internet giants continued. Tech stocks tumbled after Tencent suspended user registration, sparking fears over who will be the next target of Beijing’s wrath.

Incisive observers point out that the new wave of stringent regulations against China’s internet and education firms has long been on Beijing’s agenda and there’s nothing surprising. Indeed, the central government has been unabashed about its desires to boost manufacturing and contain the unchecked powers of its service industry, which can include everything from internet platforms, film studios to after-school centers.

A few weeks ago I had an informative conversation with a Chinese venture capitalist who has been investing in industrial robots for over a decade, so I’m including it in this issue as it provides useful context for what’s going on in the consumer tech industry this week.

China is putting robots into factories at an aggressive pace. Huang He, a partner at Northern Light Venture Capital, sees three forces spurring the demand for industrial robots — particularly ones that are made in China.

Britain is 'a bi*ch asking for a beating' with its South China Sea warship challenge, Beijing warns
https://www.dailymail.co.uk/news/articl ... warns.html

By Lauren Lewis and Chris Pleasance for MailOnline


China has warned Britain is 'a bi*ch... asking for a beating' if British warships challenge Beijing's claim to the South China Sea.

The HMS Queen Elizabeth and her carrier group arrived in the disputed waters on Thursday and are set to sail through Beijing's backyard alongside eight other vessels in a show of strength to Chinese President Xi Jingping.

But Chinese state media has warned any move seen as a challenge to islands which Beijing lays claim to would mean Britain 'is being a bi*ch' and 'asking for a beating'.

Editor-in-chief of the state-run Global Times Hu Xijin said China would 'make an example' of any British incursion into waters claimed by Beijing.

US President Joe Biden has been accused of “interfering” by China after announcing thousands of Hong Kong residents will be offered a temporary “safe haven” in America.

When Beijing imposed its new national security law on the territory last year, the UK offered those from Hong Kong a path to permanent residency.

https://www.channel4.com/news/mass-prot ... teve-vines
“People assume that time is a strict progression of cause to effect, but *actually* from a non-linear, non-subjective viewpoint - it's more like a big ball of wibbly wobbly... time-y wimey... stuff.” - Steven Moffat
Top

(The Conversation) The Chinese Communist Party is celebrating the 100th anniversary of its founding in 1921. For most of those decades, the party sought to restrict or obliterate traditional religious practices, which it considered part of China’s “feudal” past.

But since the late 1970s, the party has slowly permitted a multifaceted and far-reaching revival of religion in China to take place. More recently, current Chinese president and Communist Party leader Xi Jinping has endorsed continued party tolerance for religion as filling a moral void that has developed amid China’s fast-paced economic growth.

This support does come with caveats and restrictions, however, including the demand that religious leaders support the Communist Party.

As a scholar of Chinese religions, these considerable changes are of special interest to me. 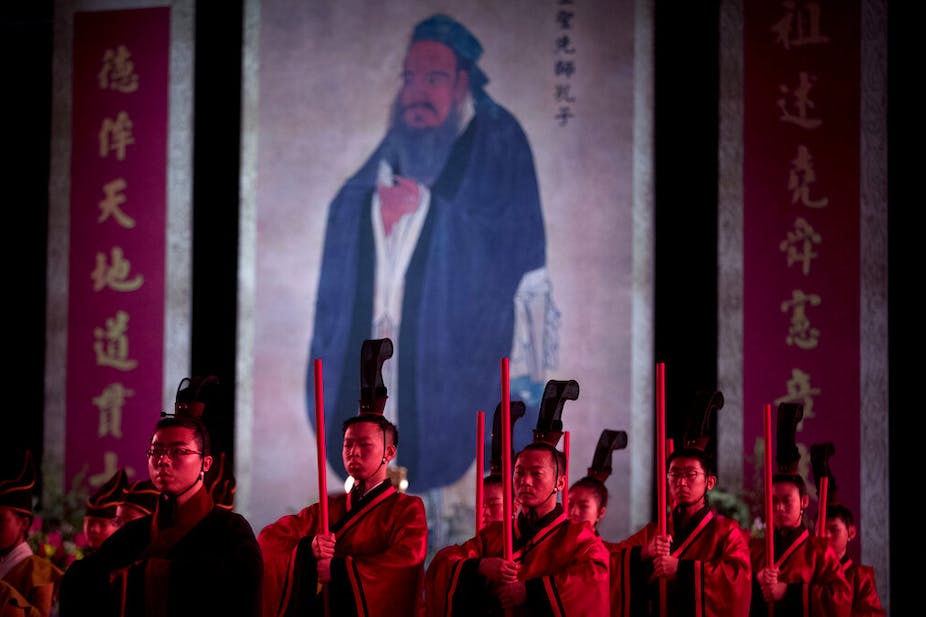 The Chinese government has promoted a revival of Confucianism, along with traditional religious practices, as part of its nationalist agenda.
AP Photo/Mark Schiefelbein
Top

https://richardhfox.wordpress.com/2021/ ... bing-down/
"Take it easy, nothing matters in the end."
– William Shatner
Top

Taliban Muslims all ready to cuddle up with China should take into account how that country treats Muslim minorities within their own border:

New Study Published in Central Asian Survey Indicates Up To 4.5 Million Lives Could be Lost Under China’s Uyghur Crackdown

(Courthouse News) - By 2040, up to 4.5 million lives could be lost as a result of China's brutal crackdown on ethnic minorities, a new study has found, providing what researchers say is more pointed evidence that the country is intentionally violating the 1948 Genocide Convention.

Earlier this year, on his last day in office, outgoing Secretary of State Mike Pompeo accused the Chinese government of committing genocide, saying that the Uyghurs — a Muslim minority ethnic group who are indigenous to the country’s Xinjiang region, or what they call East Turkistan — have been subjected to crimes against humanity that have escalated since at least 2017.

Some of the measures China has allegedly taken include placing millions of Uyghurs and other Muslim minorities under mass surveillance or in concentration camps, subjecting them to forced sterilization, unwanted abortions, political reeducation and other human rights abuses — with the justification that doing so prevents terrorism and religious extremism. Other allegations include rape and torture of Uyghur detainees.

China has repeatedly denied the accusations, calling them absurd lies.

Now, through the examination of China’s own government and academic reports, a new study published Tuesday in the journal Central Asian Survey has quantified the potential amount of lives that could be lost as a result of the population control policies and analyzed the country’s intent behind those policies.

China is putting companies that overwork their employees on notice.

The country's top court on Thursday issued a lengthy condemnation of what's commonly known in China as "996," the practice of working from 9 a.m. to 9 p.m. six days a week that is said to be common among the country's big technology companies, startups and other private businesses.

"Recently, extreme overtime work in some industries has received widespread attention," the Supreme People's Court wrote in its statement, which it issued with the Ministry of Human Resources and Social Security. Workers deserve rights for "rest and vacation," adding that "adhering to the national working hour system is the legal obligation of employers," the court wrote.

It cited several examples of companies across a range of industries it said violated labor rules, including an unnamed courier company that it said told employees to work 996 hours. Telling employees to work that much "has seriously violated the law on extending the upper limit of working hours and should be deemed invalid," the court said.

The public backlash against the excessive-work culture isn't new. Alibaba (BABA) co-founder Jack Ma, for example, was heavily criticized in China two years ago after he called 996 culture a "huge blessing." And Chinese labor law already prohibits employees from working that long.