(Reuters via CNBC) Hong Kong pro-democracy activist Agnes Chow was released from prison on Saturday after serving nearly seven months for her role in an unauthorized assembly during antigovernment protests in the city in 2019.

The 24-year-old activist had been convicted together with her long-time activist colleague, Joshua Wong, for their involvement in an illegal rally near police headquarters in the Chinese-ruled city.

Wong remains in prison and the reason for Chow’s early release after being sentenced to 10 months in jail was not clear. The Correctional Services Department said it would not comment on individual cases.

Chow was released from the Tai Lam Correctional Institution in Tuen Mun, in Hong Kong’s New Territories district, at about 10 a.m. (0200 GMT).

She did not speak to media before she was ushered into a car with friends and fellow democracy activists.

(SupChina) Will China invade Taiwan? The question has recently leapt to the forefront of international debate, with observers pondering the imagined consequences: Would the U.S. come to Taiwan’s defense? Would Taiwan retaliate by bombing the mainland? Would the conflict draw regional players into the devastation? How quickly, and how far, would the fighting spread? Just how many people would die?

Testifying before the Senate Armed Services Committee in early March, Admiral Philip Davidson warned that China could invade Taiwan in the next six years. MoneyWeek followed the admiral’s provocation with an article in April asking, “Will China invade Taiwan?” By May, worries over China’s intentions led the Economist to dub Taiwan “the most dangerous place on Earth.”

Allow me to step in and put the matter to rest: No, China will not invade Taiwan.

Concerns over a possible invasion of Taiwan have been flamed by Xí Jìnpíng’s 习近平 increasingly strident nationalism, yet we should remember that every leader of modern China, beginning with Chairman Máo Zédōng 毛泽东 in 1949, has pledged to “reunify” Taiwan with the mainland. Following the Communists’ triumph over Chiang Kai-shek’s Nationalists in 1949, many assumed Mao’s forces would storm Taiwan, where Chiang had fled. In “Probable Developments in Taiwan,” a formerly classified 1950 CIA report I found at the Harry S. Truman Presidential Library, CIA analysts fretted that an invasion was coming. Communist propaganda at the time said as much. But in the appendices to the CIA report, a range of military experts (perhaps happy to contradict the ever-encroaching spies) argued that Mao’s threats were empty, for the Communists lacked air cover, amphibious assault vehicles, and credible naval power. An invasion of Taiwan, under these circumstances, would have been a military fiasco. Back in 1949 and 1950, when “reunification” with Taiwan was most plausible, the mainland’s chest-thumping was mere bluster, intended to stir the passions of domestic audiences. (Courthouse News) — With anxiety in Europe and the United States growing over the rise of China, the NATO military alliance on Monday for the first time placed not just Moscow but also Beijing at the center of its strategic thinking and declared that the Asian superpower “presents challenges.”

Meeting at the NATO headquarters in Brussels, the 30-nation military alliance said it needs to focus on the threats China poses as it builds up a high-tech military, expands into space, draws closer to Russia militarily and tries to seize control of critical infrastructure such as airports and cutting-edge internet systems.

It was the second big diplomatic win in two days for U.S. President Joe Biden on his weeklong trip to Europe, where he is rallying allies after four discomfiting years of the disruptive presidency of Donald Trump, who questioned the need for NATO. This is Biden’s first foreign trip as president.

On Sunday, Biden persuaded the Group of Seven rich nations to back a wide-ranging American-led plan to counter China’s rise. In a joint communiqué, they accused China of human rights abuses, uncompetitive trade practices and spreading its authoritarian style of government around the world. Biden is carrying on a decade-long policy by the U.S. to curb China’s rise.

The change in tone from NATO and the G-7 signals a potentially far-reaching shift in European attitudes towards China and a break in what have been until recently friendly relations.

The Chinese government has acknowledged damage to fuel rods at a nuclear power plant in the south of the country, but said no radioactivity had leaked.

China's Ministry of Ecology and Environment said the problem was "common" with no need for concern.

The admission comes after CNN reported that the US government was assessing a reported leak at the facility.

China beats US in patent filings for second straight year

VIENNA -- China has captured the top spot in 2020 among international patent applications for the second consecutive year, a United Nations ranking released Tuesday shows, demonstrating once again how Asia is leading the tech innovation in the new normal.

The U.S. remained in second place, with filings inching up 3% to 59,230. The numbers show clear signs of peaking out. Both the administrations of President Joe Biden and former President Donald Trump have found fault with China's infringement of intellectual property rights and forced technological transfers. The battle for hegemony in advanced technology will likely ramp up.

Japan stood in third place, although like the U.S., patent filings have plateaued. Applications declined by 4% last year to 50,520.

"It's not as if filings from the traditional parts of the world like the U.S. or Europe have decreased, it's just that the rate, the acceleration, has become a lot stronger in Asia," Daren Tang, WIPO director-general, said at a news conference.

Hong Kong's largest pro-democracy paper Apple Daily has announced its closure, in a blow to media freedom in the city.

The tabloid's offices were raided last week over allegations that several reports had breached a controversial national security law.

Police detained the chief editor and five other executives, and company-linked assets were frozen.

The publication had become a leading critic of the Hong Kong and Chinese leadership.

The Apple Daily management said that "in view of staff members' safety", it had decided "to cease operation immediately after midnight" - making Thursday's publication the final printed edition.

UK Foreign Secretary Dominic Raab said the paper's closure was a "chilling blow to freedom of expression in Hong Kong". 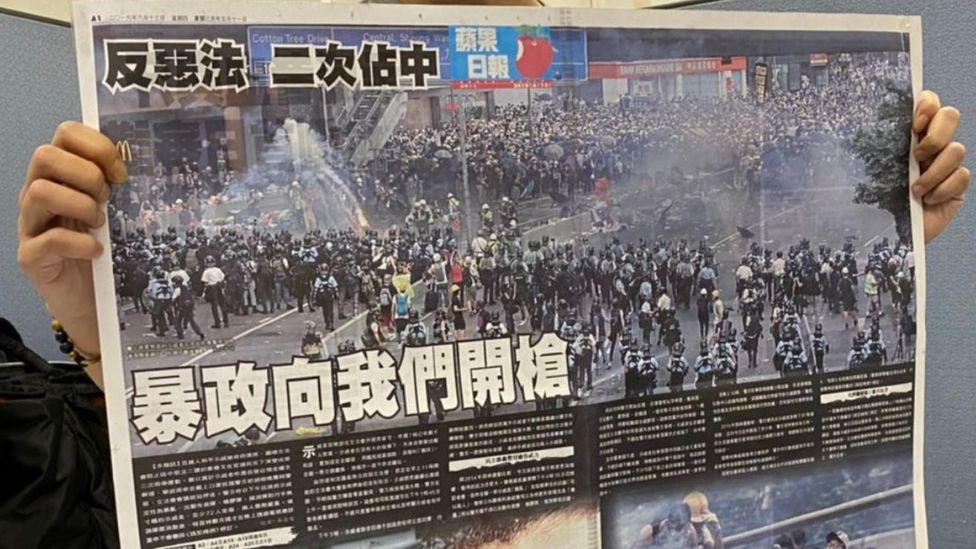 Marking Centennial, Xi Warns That China Will Not be Bullied
by Chris Buckley and Keith Bradsher
July 1, 2021

(The Indian Express) China’s rise is unstoppable, Xi Jinping declared. The country will not be lectured. And those who try to block its ascent will hit a “Great Wall of steel.”

Xi, the most powerful Chinese leader in generations, delivered the defiant message in a speech in Beijing on Thursday that celebrated 100 years of the Chinese Communist Party.

The speech was laden with symbols intended to show that China and its ruling party would not tolerate foreign obstruction on the country’s path to becoming a superpower. The event’s pageantry symbolized a powerful nation firmly, yet comfortably, in control: A crowd of 70,000 people waved flags, sang and cheered in unison. Troops marched and jets flew overhead in perfect formations. And each time Xi made a pugnacious comment, the crowd applauded and roared approval.

At times, Xi’s strident words seemed aimed as much at Washington as at the hundreds of millions of Chinese who watched on television. The biggest applause from the hand-picked, COVID-screened audience in Tiananmen Square came when he declared that China would not be pushed around.

“The Chinese people will never allow foreign forces to bully, oppress or enslave us,” he said, clad in a Mao suit. “Whoever nurses delusions of doing that will crack their heads and spill blood on the Great Wall of steel built from the flesh and blood of 1.4 billion Chinese people.” In this April 26, 2019, file photo, Chinese President Xi Jinping raises his glass and proposes a toast during the welcome banquet for visiting leaders attending the Belt and Road Forum at the Great Hall of the People in Beijing.
(AP)
Top

The Chinese Communist Party (CCP) was founded on the ideological foundation of Marxism in 1921 and led the country to a revolution-fueled bloody civil war, in which the communists emerged victorious in 1949. As the sole party ruling China, the CCP adopted Marxism Leninism along with Mao Zedong’s Thought as its – and thus the country’s — guiding ideological principles. However, though the CCP continues to rhetorically champion the cause of the less fortunate, the party has turned into a club of billionaires and millionaires since 2002, when Party boss Jiang Zemin welcomed the super rich to become members. This was major shift for the CCP and its identity as the vanguard of the working class. At present there are more than 100 billionaires in the upper echelons of Chinese leadership as members and/or advisors to CCP leadership. Their wealth keeps flourishing under President Xi Jinping.

Nevertheless, the CCP still extols the contribution of Marxism to China’s development and its relevance in realizing Xi’s China Dream.

(ProPublica) On the hunt again, the cop from Wuhan rolled into New Jersey on a secret reconnaissance mission.

Hu Ji watched the suburban landscape glide past the highway. He was in his early 40s, about 6-foot-1, smooth and confident-looking. His cases had led from Fiji to France to Mexico, making headlines back home. The work was riskier here; in fact, it was illegal. But he knew the turf. He’d identified himself as a Chinese police officer on his tourist visa, and the Americans hadn’t given him any trouble. Sometimes, it was best to hide in plain sight.

Hu’s driver took an exit into a wooded subdivision, cruising by big homes set back from the two-lane road that wound through one of the country’s wealthiest enclaves. The driver was a new recruit, a boyish-looking Chinese immigrant in his late 20s who lived in Queens and called himself Johnny. Johnny’s uncle in Houston had been a target of Hu’s covert team. Two months earlier, they had “persuaded” the uncle, a former chief accountant for a provincial aviation agency, to return to China to stand trial for alleged crimes. Hu had essentially offered a brutal deal to Johnny and his relatives: If you want to help your family, help us destroy someone else’s.
…
Locked onto his new target, Hu mobilized his team. It grew to at least 19 American and Chinese operatives: hired muscle, private detectives (including a former New York Police Department sergeant), and undercover repatriation specialists who slipped in and out of U.S. airports with ease. The team did stakeouts while the unsuspecting neighborhood slept. They employed aliases and cover stories to relay money, intelligence and threats. When the stage was set, they brought their target’s frail and elderly father from China to New Jersey as human bait — a high-stakes gambit known as an “emotional bomb.”

This time, it blew up in their faces. Last October, Hu hit the headlines again, this time in the United States, when federal prosecutors in New York charged him and seven others with conspiracy to act as illegal agents for China. Six of them, including the former NYPD detective, were also charged with conspiracy to engage in interstate stalking.