Firebrand left-wing teacher Pedro Castillo announced late on Tuesday he had won a run-off vote against Keiko Fujimori and would become the next president of Peru. Speaking before counting had officially ended, Castillo told supporters massed in front of his Perú Libre party’s headquarters that “the people have spoken,” before removing his hat and opening his arms to the wild cheers and euphoric celebrations of the assembled group. 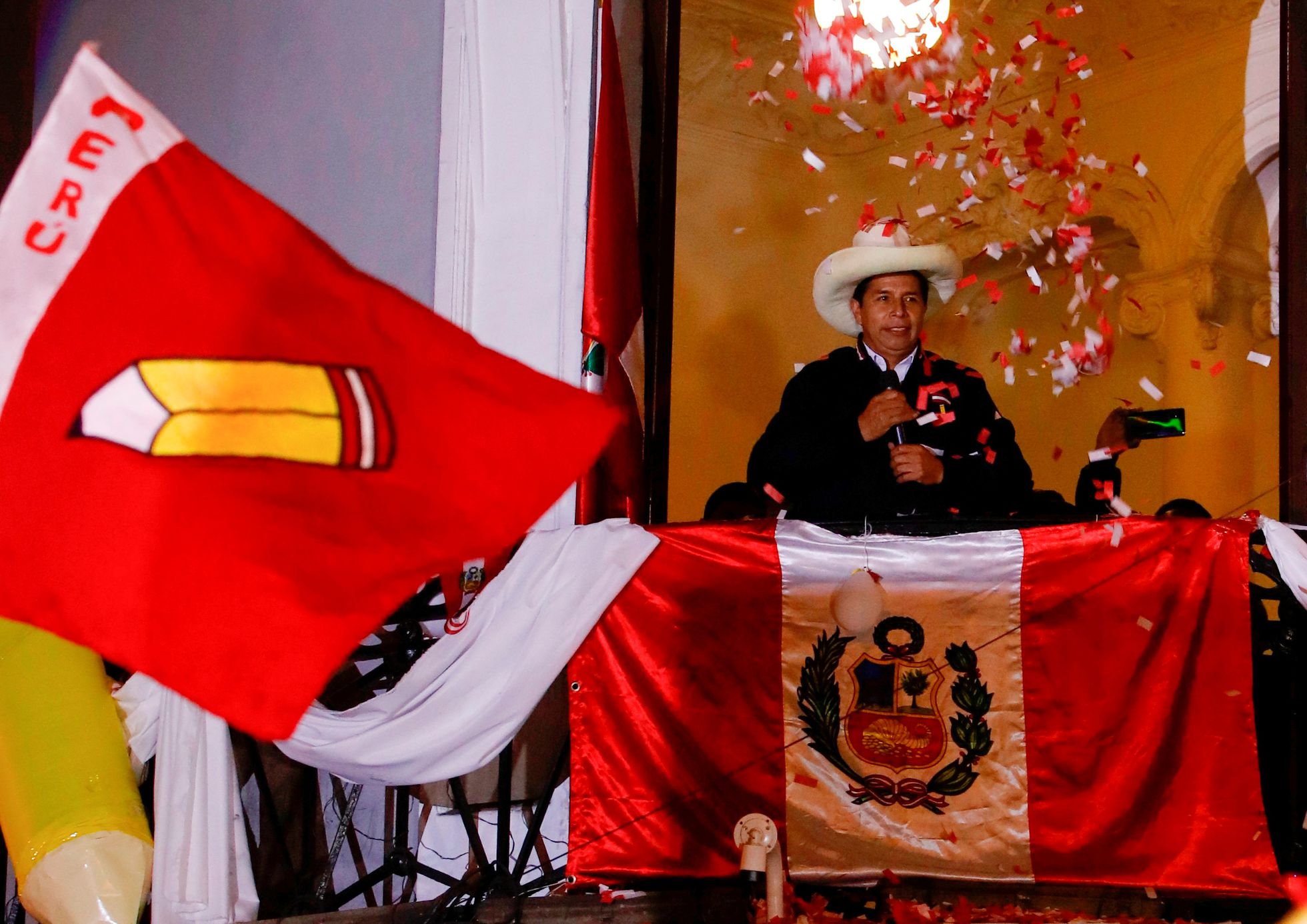 Pedro Castillo greeting supporters at his campaign headquarters in Lima on Monday night.SEBASTIAN CASTANEDA / REUTERS
And remember my friend, future events such as these will affect you in the future
Top

(AP) The partial map of votes showed a country split in two. Castillo overwhelmingly dominated the impoverished rural areas of the Andes and much of the Amazon. Fujimori was the candidate of the business elite, dominating the capital and other cities on the Pacific coast.

The cities hardest hit by the Shining Path rebel group during Peru’s internal conflict between 1980 and 2000, which left almost 70,000 people dead, voted for Castillo. It was an adverse result for Fujimori, who during the campaign accused the professor without evidence of ties to terrorism.
The areas where international mining companies are seeking to expand extractive projects also voted almost entirely for Castillo. In the country’s poorest district, Uchuraccay, the teacher captured 87% of the votes, while in the richest district, San Isidro, Fujimori prevailed with 88%.
...
Keiko Fujimori herself has been imprisoned as part of a graft investigation though she was later released. Her father, Alberto Fujimori, governed between 1990 and 2000 and is serving a 25-year sentence for corruption and the killings of 25 people. She has promised to free him should she win.

Castillo until recently was a rural schoolteacher in the country’s third-poorest district, deep in the Andes. The son of illiterate peasants entered politics by leading a teachers’ strike. While his stance on nationalizing key sectors of the economy has softened, he remains committed to rewriting the constitution that was approved under the regime of Fujimori’s father.

Colombia’s Protests Are a Product of its Post-peace-deal Reality
June 12, 2021


(Common Dreams) In Cali, a city in southwestern Colombia, protesters put up barricades across the city. A front line — la primera línea — sometimes guards these barricades with masks and helmets and shields.

Cali is the epicenter of the unrest that has convulsed Colombia for more than a month. A tax reform bill proposed by right-wing President Ivan Duque sparked protests in late April, with thousands responding to a call from national labor unions to push against the measure.

The government defended the proposed tax increase as a much-needed measure to repair the economy after fallout from the coronavirus. Those who opposed the legislation saw it as putting another burden on middle-class and poorer families who are already in a precarious position, also because of the coronavirus.

Anger over the tax bill also became an outlet for pent-up grievances against Colombia’s economic structures and its political elite. “It only takes a spark where there’s a lot of discontent,” Muni Jensen, senior adviser with the Albright Stonebridge Group and a former Colombian diplomat, said.

Demonstrators, many of them young or from marginalized communities, are speaking out about structural inequality, poverty, land reform, health care, and lack of education and opportunity. Many of these pressures have existed in Colombia for years, but they deepened dramatically during the pandemic.

Colombia, Between Extermination and Emancipation
June 11, 2021

(Counterpunch) Jhoe Sauca, of the Traditional Authority of the Kokonuco People and the Regional Indigenous Council of Cauca, explains that the tax reform was unacceptable to the Colombian people and became the aggravating factor that finally mobilized millions. “We can’t take it anymore,” he says. “With the pandemic we have been enduring hunger, and our businesses have gone bankrupt, while the government supports the banks and large companies.” He says that the peoples of Colombia have been fighting for 50 years under the principle of unity, and that the reform “has tipped the balance in favor of the message that we have been transmitting to Colombian society — that we must fight for rights.”

He adds, “I think that within this framework, we can raise out organizing capacity at the level of an indigenous movement but also at the society level.” He notes that in 2017 the Social and Community Minga (see definition below) in Defense of Life, Territory, Democracy, Justice and Peace was organized. As it mobilized in their territories, the Minga has brought large contingents to the protests, especially in Cali.

In the same discussion, Vilma Almendra Quiguanás, of the Nasa-Misak people and member of Pueblos en Camino, points out the historic nature of the unity that has been achieved: “Many people from the rural territories are in the movement. According to Indepaz data, of the 1,123 municipalities in the country, 800 have mobilized. We are 15 million in an unprecedented movement. ” She sees the protest as the culmination of 529 years of colonization and resistance, of millennia of patriarchy, and of the false promises and expectations that arose from the Peace Agreement.”

She goes on, “Almost five years after the signing of the Peace Agreement, well yes, development in the ‘inhospitable areas’ has been guaranteed. But what is ‘development?’ It’s mining concessions, oil concessions, expansion of the agricultural boundary, monocultures, water concessions — death projects that are dispossessing, killing and criminalizing the peasantry and popular movements. They deceived us that there would be peace. They deceived us that there would be money. There is neither peace nor money.”

Juan Guaidó: ‘We’re not depending on the good faith of a dictatorship’

Caretaker Venezuelan leader Juan Guaidó, elected by the National Assembly, presents the need for a plan of national salvation – an agreement concluding in free and fair elections while defending human rights.

In a feature-length interview, the opposition leader explains Argentina’s potential role in the negotiations while marking out the shades of difference between the positions of Alberto Fernández and Cristina Fernández de Kirchner.

He warns that democracies must look out for the “alarm bells” announcing the imminence of authoritarianism.

https://www.batimes.com.ar/news/latin-a ... ship.phtml
“People assume that time is a strict progression of cause to effect, but *actually* from a non-linear, non-subjective viewpoint - it's more like a big ball of wibbly wobbly... time-y wimey... stuff.” - Steven Moffat
Top

Unrest in Nicaragua and Colombia is generating concern from Latino members of Congress who worry about violent crackdowns to curb continuing protests.

Why it matters: After 20 years of focus on the Middle East, Latino lawmakers are reaching across the aisle and helping shift some of the nation's foreign policy spotlight to Latin America, which continues to battle COVID-19 and pockets of political turmoil.

Driving the news: At least 24 people have been killed in Colombia since protests began in April against a tax reform proposal that has since been withdrawn. Demonstrators also want a universal basic income and an end to police violence, among other demands.

(AP Via NBC) LIMA, Peru — A teacher in one of the poorest communities in the Andes who had never held office is now Peru’s president-elect after officials in the South American country declared him the winner of a runoff election held last month.

Leftist Pedro Castillo catapulted from unknown to president-elect with the support of the country’s poor and rural citizens, many of whom identify with the struggles the teacher has faced. Castillo was officially declared winner Monday after the country’s electoral count became the longest in 40 years as his opponents fought the results.

Castillo received 44,000 more votes than right-wing politician Keiko Fujimori in the June 6 runoff. This is the third presidential election defeat for the daughter of imprisoned former President Alberto Fujimori.

Fujimori, who ran with the support of the business elites, said Monday that she will accept Castillo’s victory, after accusing him for a month of electoral fraud without offering any evidence. The accusation delayed his appointment as president-elect as she asked electoral authorities to annul thousands of votes, many in Indigenous and poor communities in the Andes.

The United States, European Union and 14 electoral missions determined that the voting was fair. The U.S. called the election a “model of democracy” for the region.

caltrek's comment: What is a little bit unusual about this development is that, despite Castillo being a "leftist", the U.S. has acknowledged that the election was fair. I can't imagine Donald Trump doing that, or even some prior Democrat presidents for that matter.
Top


(Latino Rebels) VENEZUELA: Representatives of the Venezuelan opposition and government have started talks to resolve the crisis facing the country. On Friday, the two sides met in Mexico City and signed an agreement to begin negotiations, which will be mediated by Norway. The government is represented by close allies of President Nicolás Maduro, while the other side is represented by leaders from four opposition parties. The talks ran into trouble when the government said they will not negotiate with opposition representatives who hold positions in the government-in-exile of self-declared acting President Juan Guaidó. One opposition envoy, Tomás Guanipa, resigned as Guaidó’s ambassador to Colombia to participate in the talks, but another, Carlos Vecchio, continues to hold a position as Guaidó’s ambassador to the United States. Meanwhile, Venezuela released opposition leader Freddy Guevara from jail on Sunday. Guevara was arrested on July 12 for treason and terrorism.

The scathing, 471-page report is the most comprehensive yet to examine the events surrounding the disputed 2019 presidential vote, when Morales’ narrow election to an unprecedented fourth term triggered widespread protests spurred by strong international allegations of voting fraud—claims later questioned by foreign electoral experts.

The report, presented Tuesday in La Paz in an event attended by new President Luis Arce, was commissioned by the Organization of American States chief human rights watchdog under an agreement with the former interim government led by Jeanine Áñez.

The five-member panel’s findings of widespread abuses by security forces acting under the conservative interim government’s direction is likely to embolden leftist supporters of Morales and Arce, who have long maintained Áñez took power through a coup tacitly backed by the Trump administration. It’s also likely to undercut criticism by the Biden administration and others suggesting that the jailing of Áñez on sedition and terrorism charges tied to the unrest was politically motivated.

“This thoroughly documented report sets the record straight,” said Kathryn Ledebur, who leads the nonprofit Andean Information Network in Bolivia and has been a sharp critic of Áñez.

(Latin America News Dispatch) CELAC: The Community of Latin American and Caribbean States (CELAC) convened its VI Summit of Heads of State and Government in Mexico City on Saturday. President Andrés Manuel López Obrador of Mexico reiterated ambitions for CELAC to replace the Organization of American States (OAS) as the region’s primary forum of cooperation and advocated for greater economic integration in the vein of the European Union (EU). The creation of a fund for natural disaster response was also announced.

The unexpected presence of Nicolás Maduro sparked tensions along ideological lines. Right-wing Presidents Abdo Benítez of Paraguay and Uruguay’s Lacalle Pou asserted that their participation in the summit did not signify a recognition of Maduro’s government. In response, the Venezuelan leader called for an end to the divisiveness in Latin America and defended fellow socialist governments in Cuba and Nicaragua against accusations of human rights abuses leveled by Lacalle Pou.

This year’s summit was the first since 2017. In 2020, Mexico and Argentina (under the leadership of President Alberto Fernández) led efforts to revitalize the organization. Created in 2010 with the aim of countering U.S. influence in the OAS, CELAC brings together 32 independent states of Latin America and the Caribbean. President Jair Bolsonaro of Brazil withdrew from the organization last year. 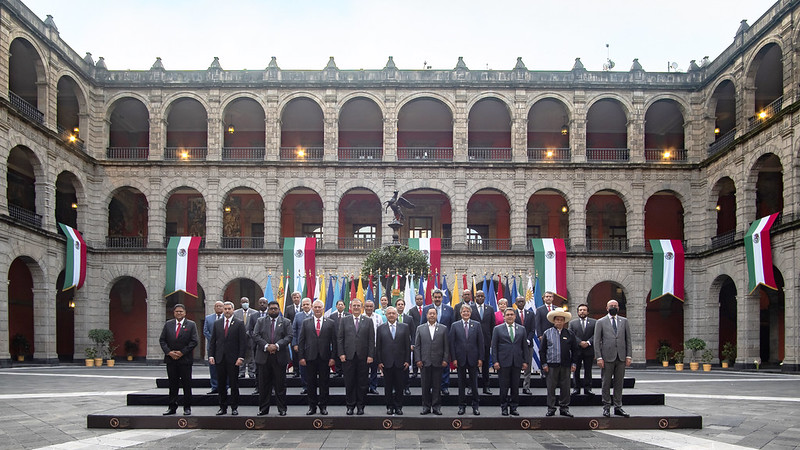