The Taliban’s gains came as the Pentagon reaffirmed the U.S. troop withdrawal was still on pace to conclude by early September.

Fighting around Imam Sahib district began late Sunday and by midday Monday the Taliban had overrun the district headquarters and were in control of police headquarters, said Inamuddin Rahmani, provincial police spokesman said.

Taliban militants were within a kilometer (.6 miles) of Kunduz, the provincial capital but had not entered into the city, he said, although there were reports of small bands of Taliban near the outskirts and residents trying to leave for Kabul.

US could slow Afghanistan withdrawal amid Taliban gains
Source: BBC


The US military has said it could slow down its withdrawal from Afghanistan in light of recent battlefield victories by the Taliban.

Pentagon spokesman John Kirby said the deadline for a full withdrawal by 11 September was still in place, but the pace may change.

Officials said last week that the withdrawal is about half-way done.

Afghanistan has seen increasing violence as the US and Nato prepare to pull out their remaining troops.

Afghanistan: Biden says Afghans must decide their own future

US President Joe Biden has said that Afghans "are going to have to decide their future" as Afghan President Ashraf Ghani visited the White House.

Mr Biden promised continued support for the country, even though US and Nato troops are set to finish their withdrawal on 11 September.

It comes as hardline Islamist Taliban fighters have captured dozens of districts in a recent offensive.

Earlier this week the UN expressed alarm at their gains.

US to keep about 650 troops in Afghanistan after withdrawal
Source: AP

d to remain in Afghanistan to provide security for diplomats after the main American military force completes its withdrawal, which is set to be largely done in the next two weeks, U.S. officials told The Associated Press.

In addition, several hundred additional American forces will remain at the Kabul airport, potentially until September, to assist Turkish troops providing security, as a temporary move until a more formal Turkey-led security operation is in place, the officials said Thursday. Overall, officials said the U.S. expects to have American and coalition military command, its leadership and most troops out by July Fourth, or shortly after that, meeting an aspirational deadline that commanders developed months ago.

The officials were not authorized to discuss details of the withdrawal and spoke to the AP on condition of anonymity.

The departure of the bulk of the more than 4,000 troops that have been in the country in recent months is unfolding well before President Joe Biden’s Sept. 11 deadline for withdrawal. And it comes amid accelerating Taliban battlefield gains, fueling fears that the Afghan government and its military could collapse in a matter of months.

(The Drive) Some of the newest additions to the U.S. Department of State's Air Wing, ex-U.S. Army Black Hawk helicopters of various types, are now flying in Afghanistan. Though the department has been conducting a variety of aviation operations there for more than a decade now, the Black Hawks provide support to the U.S. Embassy in Kabul. This is a mission that could be even more important in the coming weeks and months as the withdrawal of American military forces from the country continues to move ahead at a brisk pace and if the security situation continues to deteriorate.
…
Any past controversies notwithstanding, the Air Wing's Black Hawks in Afghanistan, and any other helicopters it operates there, could become very significant assets in the near future. After almost two decades of operations in the country, the U.S. military is on pace to meet President Joe Biden's deadline of having withdrawn almost entirely by September, a pullout that has already been moving ahead very quickly and that may well be complete as soon as August.
…
Other members of the NATO-led coalition in the country are also steadily withdrawing. Just today, U.S. officials announced that there were no more American or other foreign military personnel at Bagram Airfield, a large base in Afghanistan Parwan Province just north of Kabul that had long served as one of the coalition's major operational hubs.
…
What the exact U.S. military force posture will look like in the end is unclear, with reports suggesting that up to 1,000 personnel could remain to perform various missions. These could include advising and liaising with Afghan security forces and providing security for any remaining American facilities in the country, such as the Embassy.
…
What other U.S. forces, such as Central Intelligence Agency (CIA) paramilitary personnel and specialized units from the State Department, to include elements of the Air Wing, will remain is also still unclear. The Embassy in Kabul itself has been operating at a reduced level since April, when non-essential staff made an "ordered departure" from the country. 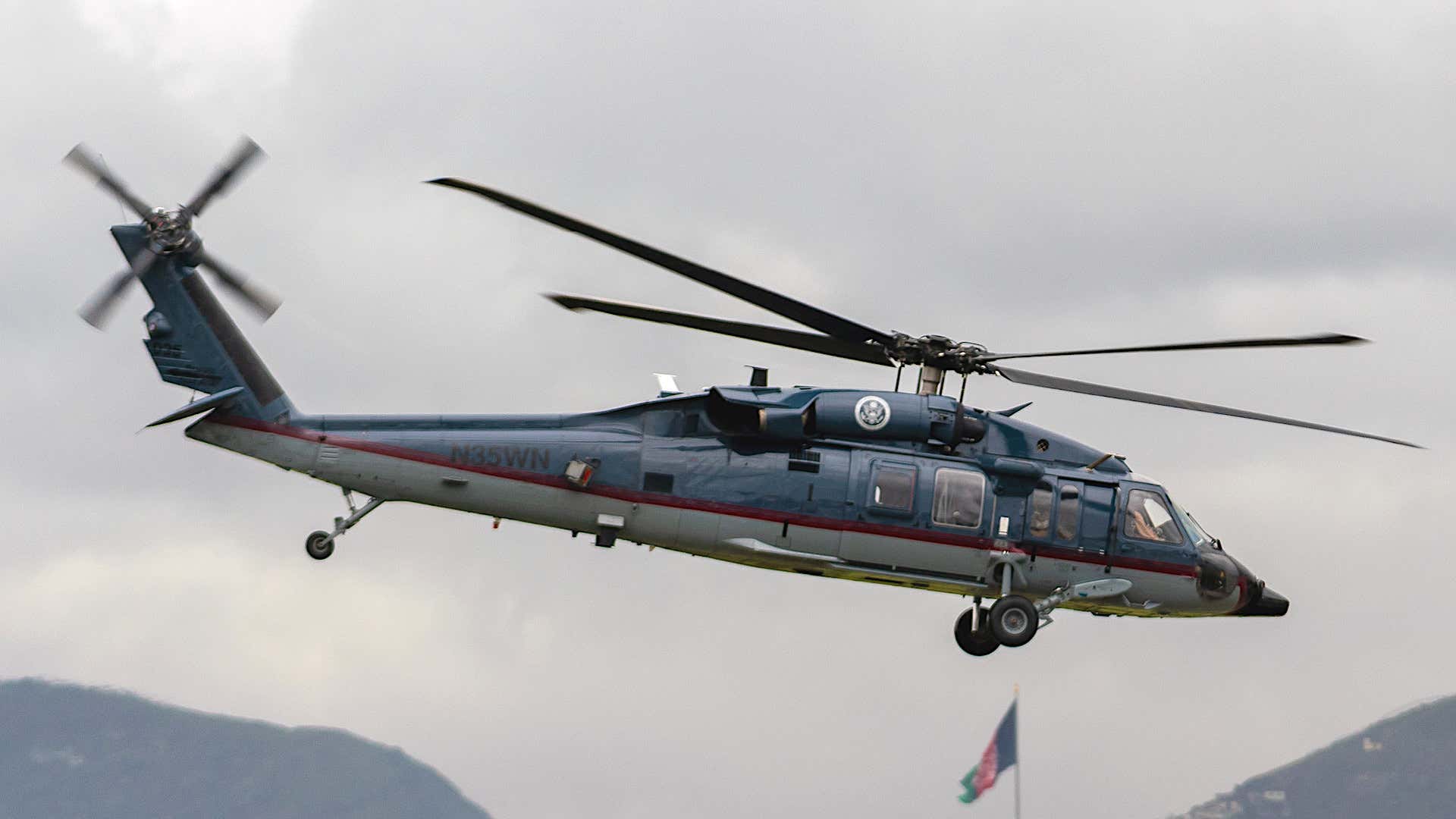 China prepares to move into Afghanistan with $62 billion 'Belt and Road' program as American troops leave.

As the U.S. exits Afghanistan, Beijing is preparing to swoop into the war-torn country and fill the vacuum left by the departed U.S. and NATO troops.

China is poised to make an exclusive entry into post-U.S. Afghanistan with its Belt and Road Initiative (BRI). Speaking on condition of anonymity, a source close to government officials in Afghanistan told The Daily Beast that Kabul authorities are growing more intensively engaged with China on an extension of the $62 billion China-Pakistan Economic Corridor (CPEC)—the flagship project of BRI, which involves the construction of highways, railways and energy pipelines between Pakistan and China—to Afghanistan.

American troops exited the main and final U.S. military base in Afghanistan on Friday, and though the initial withdrawal date was slated for Sept. 11, security officials told Reuters that the majority of troops would be out by July 4.

The U.S. left Afghanistan’s Bagram Airfield after nearly 20 years by shutting off the electricity and slipping away in the night without notifying the base’s new Afghan commander, who discovered the Americans’ departure more than two hours after they left, Afghan military officials said.

Afghanistan’s army showed off the sprawling air base Monday, providing a rare first glimpse of what had been the epicenter of America’s war to unseat the Taliban and hunt down the al-Qaida perpetrators of the 9/11 attacks on America.

The U.S. announced Friday it had completely vacated its biggest airfield in the country in advance of a final withdrawal the Pentagon says will be completed by the end of August.

“We (heard) some rumor that the Americans had left Bagram ... and finally by seven o’clock in the morning, we understood that it was confirmed that they had already left Bagram,” Gen. Mir Asadullah Kohistani, Bagram’s new commander said.

China a ‘welcome friend’ for reconstruction in Afghanistan: Taliban spokesman

The Taliban sees China as a “friend” to Afghanistan and is hoping to talk to Beijing about investing in reconstruction work “as soon as possible”, the group’s spokesman Suhail Shaheen said on Wednesday.
In an exclusive interview with This Week in Asia, Suhail said the Taliban now controlled 85 per cent of the country and that it would guarantee the safety of Chinese investors and workers if they were to return.
“We welcome them. If they have investments of course we ensure their safety. Their safety is very important for us,” he said by phone.

WAS IT ALL FOR
And remember my friend, future events such as these will affect you in the future
Top

'Like Vietnam': Why the US Afghanistan withdrawal was so quick and why they left so much behind

The US military departed from the Bagram airbase in Afghanistan last week in a remarkably unceremonious way.

The Americans had been using the massive, heavily fortified facility the size of a town for 20 years.

But the Afghan general who took over the place found out the Americans were gone two hours after they had turned off the electricity.

There was no ceremony. No handover. No: "Here's the keys, good luck!"

Many of the vehicles were actually left behind with no keys.

So, why did the US military slip away without telling anyone? Is this a normal way to end a war?

And why did they leave so much stuff behind?

While use of the word "terrorist" in the article below may be a bit loaded, the point being made is interesting.

(Hindustan Times) Thousands of Pakistani terrorists from Lashkar-e-Taiba (LeT), Jaish-e-Mohammed (JeM) and other groups are currently fighting alongside the Taliban in Afghanistan in a clear violation of the 2020 peace deal signed by the Taliban and the US, according to reports from security agencies.

The assessments come at a time of growing alarm in the international community, including India, at the Taliban’s rapid resurgence in Afghanistan that some intelligence agencies fear is poised to wrest control of key parts of the country from the Afghan government.

A majority of the LeT and JeM fighters are active in Kunar and Nangarhar provinces in eastern Afghanistan and Helmand and Kandahar provinces in the country’s southeast, according to information gathered by Afghan and Indian security agencies, people aware of the matter said. All four Afghan provinces share borders with Pakistan – Kunar and Nangarhar with the erstwhile tribal areas and the other two with Balochistan.

Terrorist fighters from other Pakistan-based groups such as Tehrik-e-Taliban Pakistan, Lashkar-e-Jhangvi, Jamaat-ul-Arhar, Lashkar-e-Islam and al-Badr have also been spotted fighting alongside the Taliban in sizeable numbers, these people said on condition of anonymity.

Pakistani terrorists have also been sighted in Ghazni, Khost, Logar, Paktia and Paktika provinces in south and southeast Afghanistan, the people said, citing the latest reports from security agencies. In these regions alone, the number of Pakistani fighters from LeT has been estimated at 7,200, the people added.