Lebanon’s economy ministry on Tuesday raised the price of subsidized bread for the fifth time in a year as the country’s multiple crises worsen with no resolution in sight.

The ministry said the reason behind the latest increase — an 18% hike from the last raise in February — was the central bank’s ending of sugar subsidies, which in turn adds to the cost of bread production.

Lebanon is grappling with the worst economic and financial crisis in its modern history — one that the World Bank has said is likely to rank as one of the worst the world has seen in the past 150 years. The currency has lost 90% of its value, breaking a record low earlier this month of 15,500 Lebanese pounds to the dollar on the black market. The official exchange rate remains 1,507 pounds to the dollar.

(Al Jazeera) World powers have met in Germany to seek lasting peace in Libya by ensuring the conflict-racked North African country stays firmly on the path towards general elections on December 24.

Representatives of Libya’s interim government on Wednesday joined US Secretary of State Antony Blinken as well as the foreign ministers of France and Egypt at the United Nations-sponsored talks in Berlin.

It is crucial that Libya holds a national election in December as the only way to ensure peace and stability in the North African country, Blinken said.
“We share the goal of a sovereign, stable, unified and secure Libya, free from foreign interference,” he said. “For this to happen national elections need to go forward in December. That means urgent agreement is needed on constitutional and legal issues.”

The effort to end a decade-long spiral of violence in Libya is the second round in Berlin, after the first attended by the presidents of Turkey, Russia and France in January 2020.

Edit: This was a filing error. They do both start with "L"

by caltrek
In Times of Crises, Lebanon’s Elderly Must Fend for Themselves

(Al Jazeera) With virtually no national welfare system, Lebanon’s elderly are left to fend for themselves amid their country’s worsening economic catastrophe.

In their prime, they survived 15 years of civil war that started in 1975 and bouts of instability. Now in their later years, many have been thrown into poverty by one of the world’s worst financial crises in the past 150 years.

Lebanon has the greatest number of elderly in the Middle East – 10 percent of the population of six million is over 65. About 80 percent of Lebanese 65 or older have no retirement benefits or healthcare coverage, according to the United Nations’ International Labor Organization.

Family members and charities, traditionally the prime source of support, are struggling with increasing needs as unemployment rises.

Any dollar savings the elderly had from a lifetime of work are locked up in banks, inaccessible in the banking crisis. Savings lost nearly 90 percent of value as the local currency collapsed against the dollar. Imported medicine and basic goods are in jeopardy, and a once-reliable healthcare system is crumbling.

by caltrek
Lebanon’s Financial Crisis Is So Bad That Soldiers Can't Feed Their Families
by Rebeca Collard
June 30, 2021

(NPR) In a video posted online, a Lebanese soldier drives past a mile-long line of cars waiting for fuel and complains that he can’t even get enough gas to drive to his military base.

“I just hope that this message reaches the commander of the army,” said the soldier, who is careful to hide his identity, pointing the camera straight forward with his military fatigues barely visible.

He said he went to a gas station but the owner wouldn’t even give him 20,000 Lebanese pounds worth of fuel — a little more than $1. He called it “a humiliation.”

The Lebanese pound has lost more than 90% of its value, and imports such as medicine, food and fuel are increasingly difficult to procure. These gas lines are a near-constant sight on Lebanon’s roads and highways.

Earlier this month, General Joseph Aoun issued a dire warning about the impact of Lebanon’s economic spiral on the Lebanese Armed Forces (LAF).

This video and videos like it do help putting a more human face on the crisis that you can't get from cold squiggly lines on your screen.

Amidst a turbulent Middle East with an excess of competing priorities for the international community, Lebanon has nearly devolved into a failed state. Yet while it is easy for many to overlook the small eastern Mediterranean country among wider regional issues, considering Lebanon’s state of affairs as an afterthought will have profoundly negative implications with substantial externalities. Certainly, the case of Lebanon is intricately intertwined with Middle Eastern geopolitics—something world leaders must recognize to prevent the coming tragedy that will extend beyond Lebanon’s borders.

The scale of Lebanon’s political and economic issues speaks to the inherent risks of avoiding the issue. A recent World Bank report paints a stark picture: “The Lebanon financial and economic crisis is likely to rank in the top 10, possibly top three, most severe crises episodes globally since the mid-nineteenth century.”

Herein lies the regional connection and wider issue—one of the externalities of state instability. While Syrian refugees cannot be blamed for Lebanon’s problems today—the Lebanese government provides minimal services in the first place—their presence has provided political elites a scapegoat that sows instability between ethnic groups. Further, Syria’s currency crisis is driven by Lebanon’s currency crisis and vice versa. History alone, from the Taif Agreement and Syrian meddling in Lebanon, depicts the truly interconnected nature of the two countries. Ultimately, instability within one state surely produces the same in its neighbor.

Such interconnectedness is tied to wider regional geopolitics 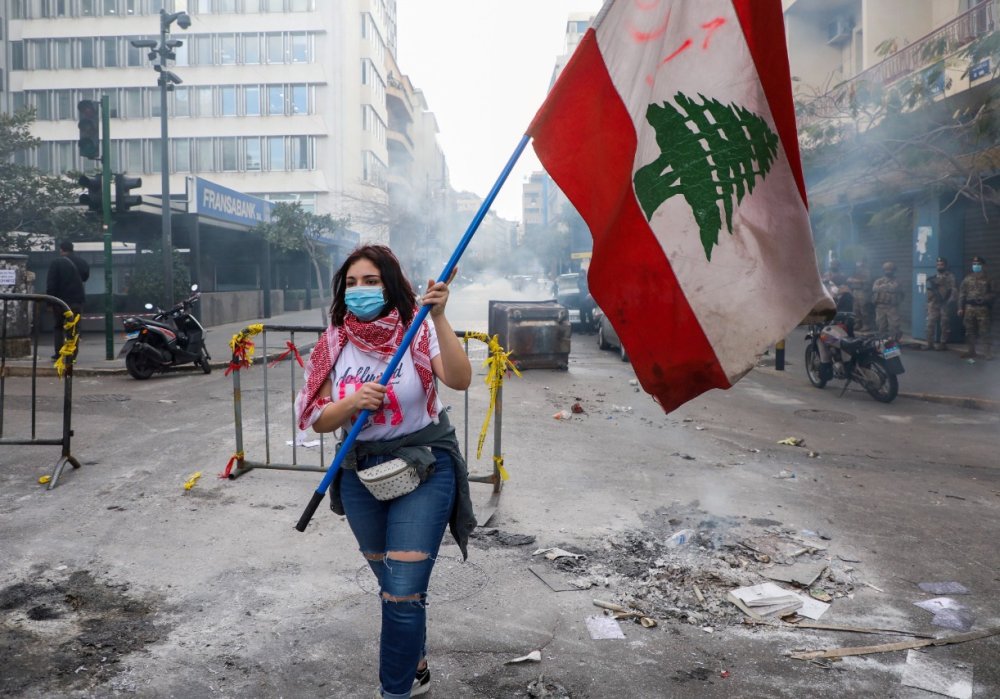 by Yuli Ban
Lebanon days away from ‘social explosion’, PM Diab warns
World Bank has called Lebanon’s crisis one of worst depressions of modern history as half of population lives in poverty

Lebanon is a few days away from a “social explosion”, caretaker Prime Minister Hassan Diab has warned, calling on the international community to save a country in deep economic crisis.

The World Bank has called Lebanon’s crisis one of the worst depressions of modern history. The currency has lost more than 90 percent of its value and more than half of the population has been propelled into poverty.

Al Jazeera’s Zeina Khodr, reporting from Beirut, said the politicians – which many Lebanese hold responsible for running the economy into the ground – are fixated on a power struggle over who will control the next government, and are blaming the international community for not bailing them out.

“These politicians are blaming the international community for demanding that a government that is able and willing to carry out financial and administrative reforms as well as fight corruption is formed before they unlock financial assistance,” she said, speaking from the capital Beirut.

“The country has been in a crisis for more than a year,” she added. “There’s no basic services in this country, no infrastructure.”

A motorcyclist outside a petrol station in Beirut where long queues had formed told Al Jazeera that life in Lebanon had become “hell”.

“We cannot live any more,” he said.

(Al Jazeera) Beirut, Lebanon – As time runs out for government subsidies in Lebanon, the troubled country faces an uphill battle to keep its population fed as food prices continue to rise, driven up by an ever-deepening liquidity crisis and a severe dependency on imported foreign goods.

Despite having the highest proportion of arable land in the Arab world with more than 200,000 hectares (494,000 acres), Lebanon’s own agricultural sector has gone underfunded and underdeveloped for many years, hindered by a lack of modern equipment and inefficient production techniques.

Now, with Lebanese farmers unable to even cover their own operating costs and the government paralysed by political deadlock, international NGOs such as Anera have been forced to upscale their aid programmes to fight back against the rapid socioeconomic decline.

“I think that Lebanon is a rich country that has not been developed to its potential, and not just in the agricultural sector,” Samar El Yassir, Anera’s Lebanon country director, told Al Jazeera.

“With the bad governance we have instead of optimising our resources many times we are diminishing [them]. 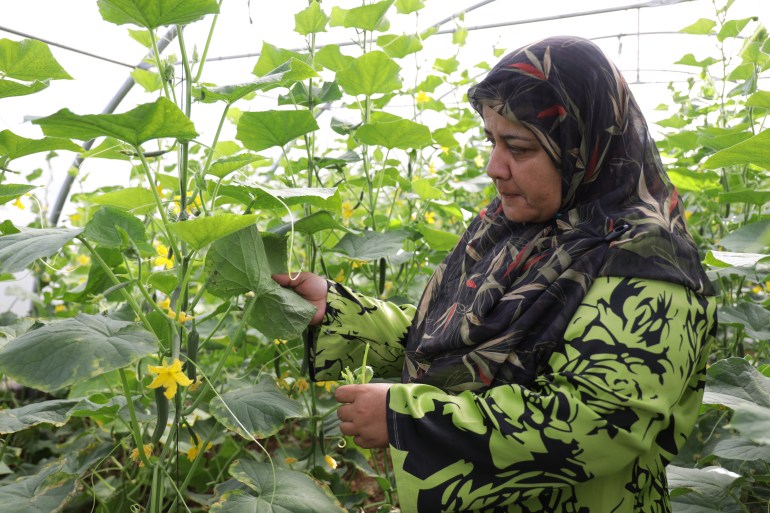 An agricultural worker checks cucumber plants in a newly built greenhouse.
[Courtesy: Anera]
All times are UTC
Page 1 of 2